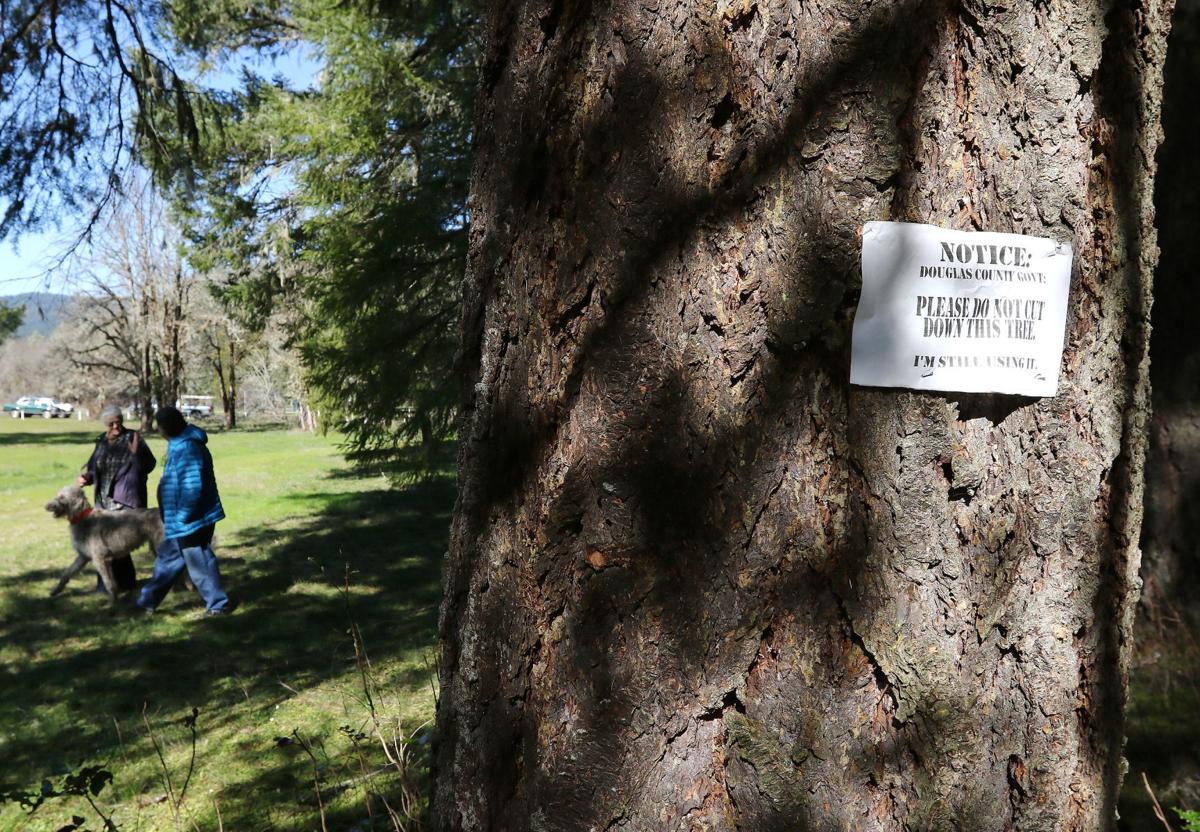 Wendy Antos of Glide and her dog Wicked walk with Bill Black of Glide on Wednesday in Cavitt Creek Park in Glide. A recent timber sale will allow Douglas County to harvest trees at the park. 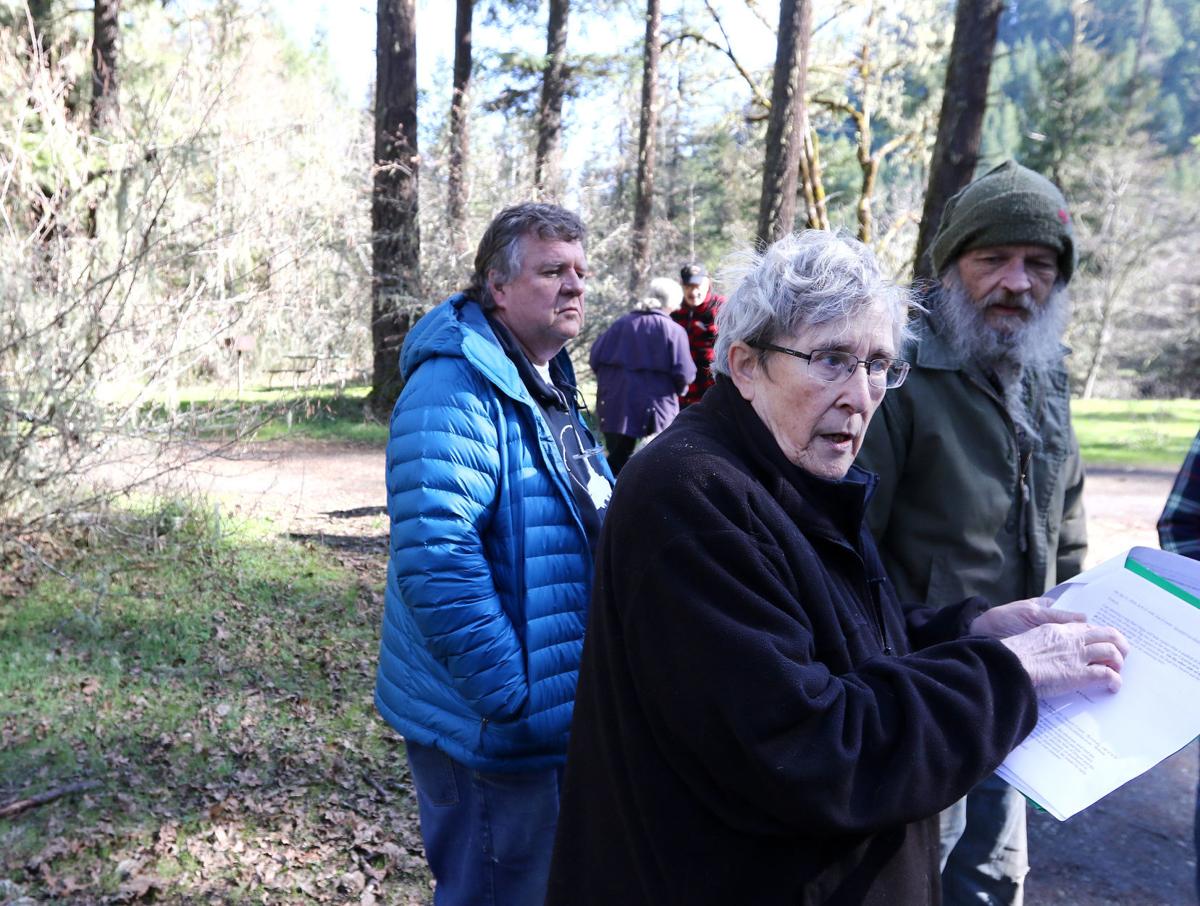 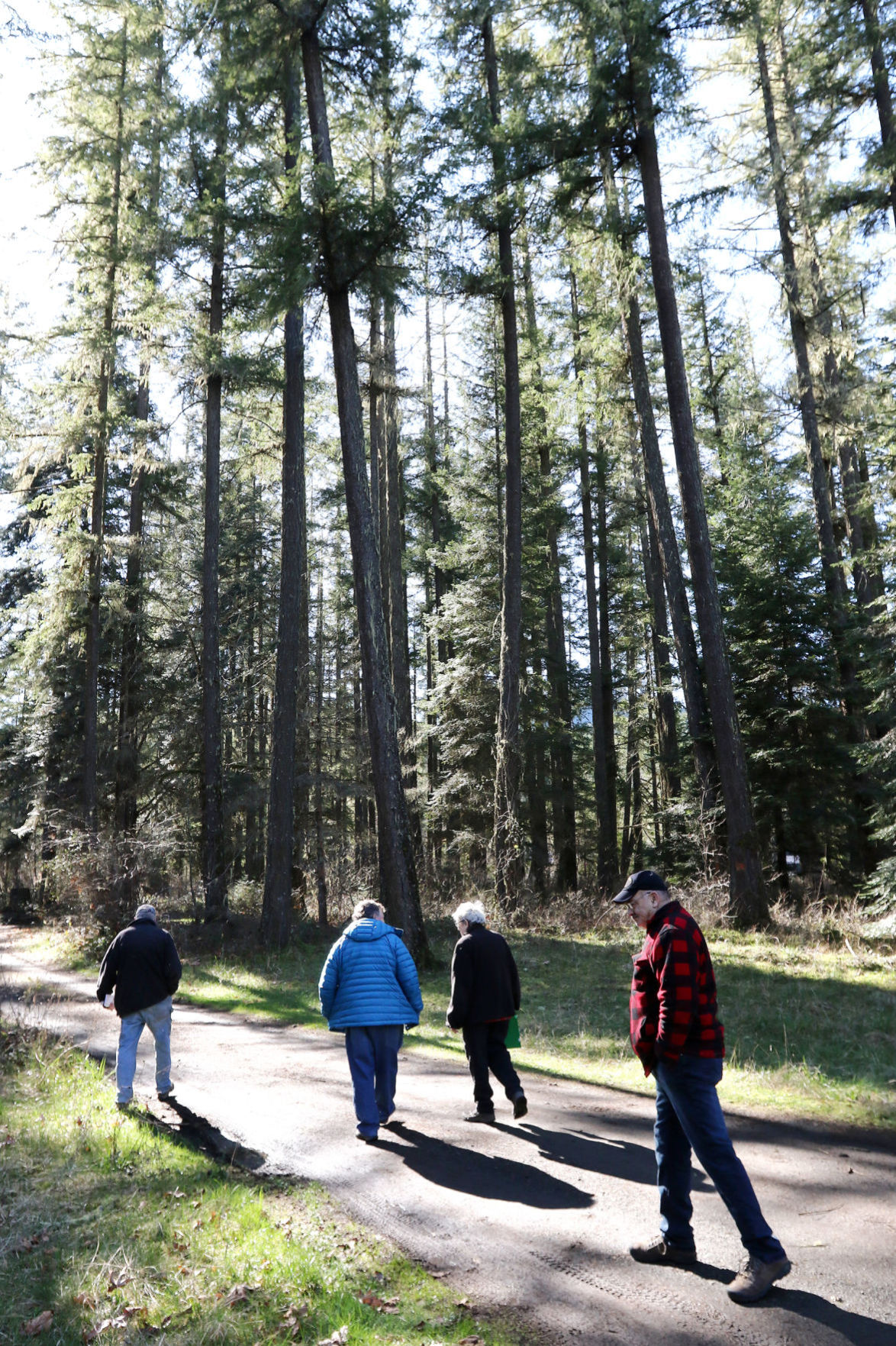 A group walks down a trail in Cavitt Creek Park south of Glide on Wednesday. A recent timber sale will allow Douglas County to harvest trees at the park. 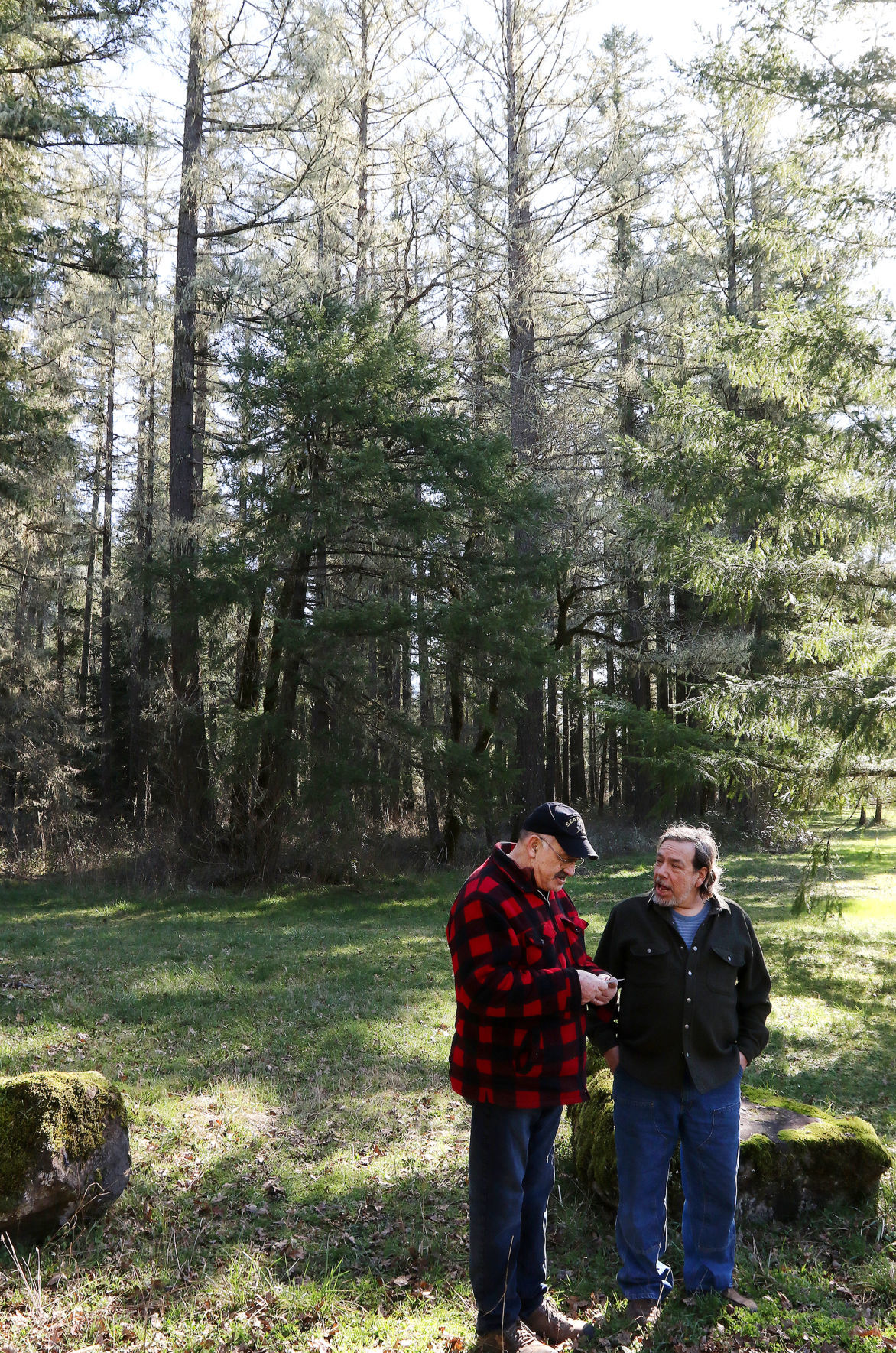 Steve Gern, left, and Jim Corrado, both of Glide, talk on Wednesday near a stand of trees growing in an area that may be harvested by Douglas County as part of a recent timber sale at Cavitt Creek Park. 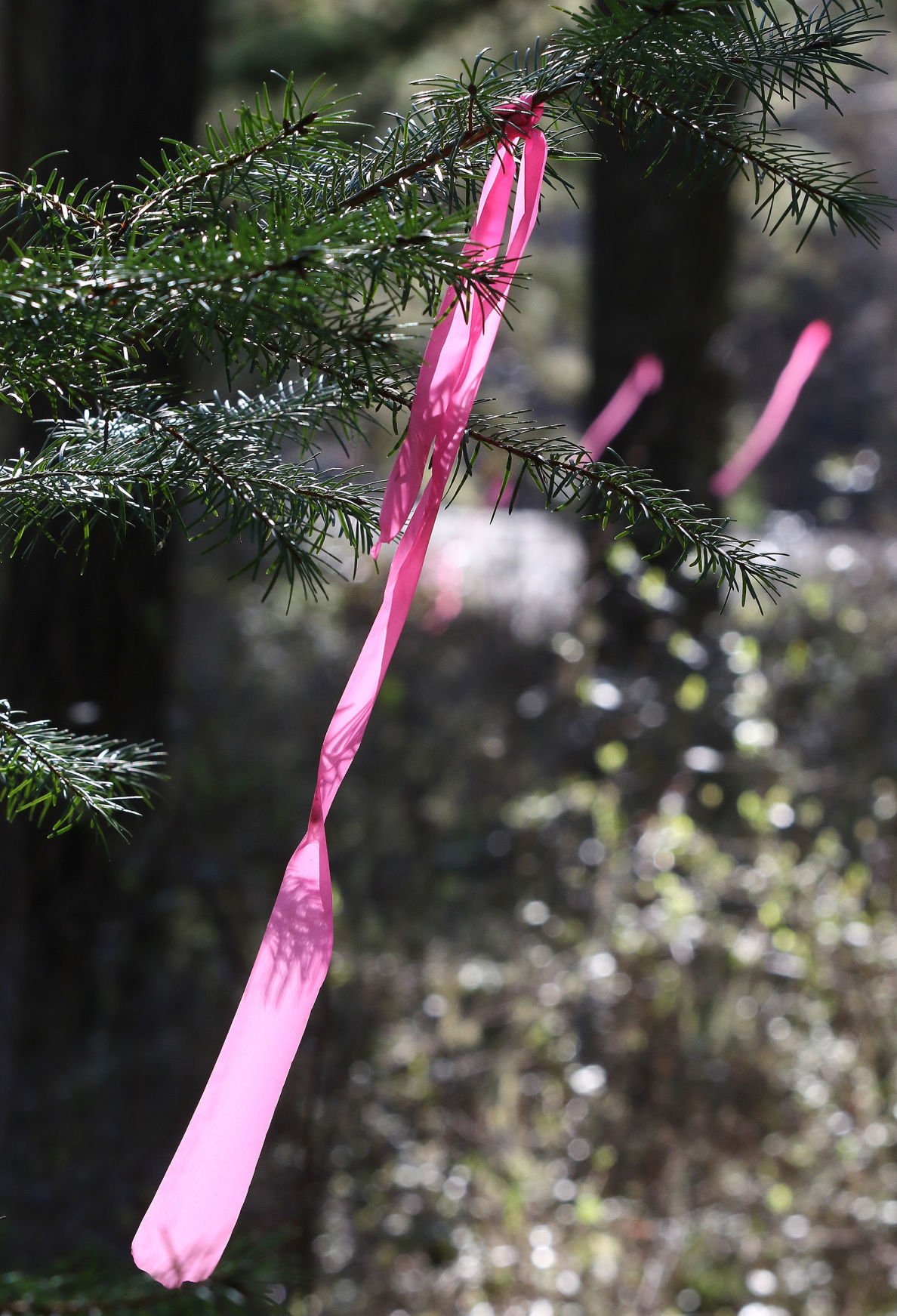 Pink streamers mark an area where trees may be harvested by Douglas County at Cavitt Creek Park near Glide on Wednesday.

Wendy Antos of Glide and her dog Wicked walk with Bill Black of Glide on Wednesday in Cavitt Creek Park in Glide. A recent timber sale will allow Douglas County to harvest trees at the park.

A group walks down a trail in Cavitt Creek Park south of Glide on Wednesday. A recent timber sale will allow Douglas County to harvest trees at the park.

Steve Gern, left, and Jim Corrado, both of Glide, talk on Wednesday near a stand of trees growing in an area that may be harvested by Douglas County as part of a recent timber sale at Cavitt Creek Park.

Pink streamers mark an area where trees may be harvested by Douglas County at Cavitt Creek Park near Glide on Wednesday.

GLIDE — A 13-acre county park nestled against jade green Cavitt Creek east of Glide is about to lose 140 trees, and many neighbors were both surprised and upset to discover this week that the timber had been sold.

A dozen neighbors spoke about their frustrations during a visit to Cavitt Creek County Park on Wednesday. As they passed through tall Douglas fir trees — some dead and some still alive — they voiced concern about why the timber is slated to be clear cut on a 5-acre section of the park. They wondered why they had heard about it only this week, even though the county had been discussing it for months, and why they’d heard it not from county government but from another neighbor tipped off by members of a local environmental organization.

Jerry Freadman lives on nearby Jim Creek Road and visits the park two to three times a week. He said while he understands removing the dead ones, he can’t understand why the county would cut the healthy trees along with them. It won’t be the same afterward, he said.

“That feels terrible. That’s not a park, what are they going to do have a lot of stumps around here? What kind of park is a stump park?” Freadman said.

Riddle company B&S Cutters submitted the successful bid for the timber, estimated at 37,400 board feet, for $6,550.

Douglas County Parks Director Rocky Houston said most of the Douglas firs in the section slated to be logged have been damaged by drought.

According to the county’s timber sale notice, 67 of the 140 trees are dead, but Houston said the county forester has designated all the trees a hazard because so many were dead or showing signs of death.

“Due to the nature of the tree groupings, our forester has identified a high risk of blow-down for the few remaining trees,” Houston said in an email.

He said the park has had many cycles in previous years of similar die-offs.

“It appears to be a symptom we are seeing all over Douglas County,” he said. “Low elevations and drought conditions have stressed many of the conifers around the County. Plus, the lack of rain and warmer temperatures have resulted in a major bug infestation. All these factors have contributed to the trees dying.”

Douglas County Parks Advisory Resource Committee members aren’t convinced. The group formed following the controversy spurred by the county’s clear-cutting of Busenbark Park in 2015 and has continued to oppose parks logging projects since.

John Hunter of DCPARC said the terms of the Cavitt Creek sale call for more cutting than is necessary and provide no real protection against the cutting even of the hardwood trees in the area. Hunter said the timber sale lacked transparency.

Information about the timber to be sold, including a map detailing the number and location of trees, was available online. And unlike the Busenbark sale five years ago, Cavitt Creek’s status as a park was clearly listed on the agenda for the January meeting at which the Douglas County commissioners gave notice of the timber sale.

Cavitt Creek is one of the county’s many parks classified “passive,” meaning it is relatively natural and undeveloped. It includes a baseball field and picnic areas as well as creek access and second-growth woods. The park used to have water as well, but the neighbors said it’s no longer available. The county’s been maintaining the park since 1971, but former owners Champion International Corporation officially donated the land to the county in 1986.

The park sits about 6 miles from the Bureau of Land Management’s Cavitt Creek Falls Recreation Area, which offers camping, and just up Cavitt Creek Road from the historic Cavitt Creek Covered Bridge.

Doris Corrado lives on Little River Road not far from the park. She visits it once in awhile, for ball games and other activities. It’s a good place to gather, she said.

She thinks the park will look much more barren if it’s logged, and she thinks there are plenty of people living in the area who will be upset about it.

“Parks are important for people. You need to have a place to go to just chill, especially right by the river,” she said.

She said she thinks the live trees there are still strong, because they survived last year’s snowmageddon storm. They haven’t fallen or leaned, like several trees have on her own property.

Wendy Antos lives on Cavitt Creek Road and regularly walks her Irish wolfhound at the park, and she was angry the trees were going to be removed.

Several neighbors voiced concerns about what would happen to the oak trees in the park. Houston said the hardwood trees such as oaks are primarily outside the cut area and won’t be removed.

Environmentalist Francis Eatherington said neighbors should have been notified.

“It’s actually not nice to surprise people with logging in the parks,” Eatherington said.

Houston said the issue had been discussed with the county’s Parks Advisory Board for the past 18 months. And while the process began with awarding a contract for a timber sale, he disputed the use of the term logging to describe what’s soon to happen in the park.

“It is a hazard tree removal, not a logging operation,” he said.

The Douglas County Parks Department announced Tuesday that Cavitt Creek County Park near Glide is now closed until May 15.

Disgusting. Only dead or hazard trees should be cut. The County should have notified the public and asked for comment, it's a much used park. Shame on the Commissioners for pulling another fast one and not at least notifying adjacent neighbors. Neighbors should contact a land use lawyer and find out if that is illegal. This stinks.