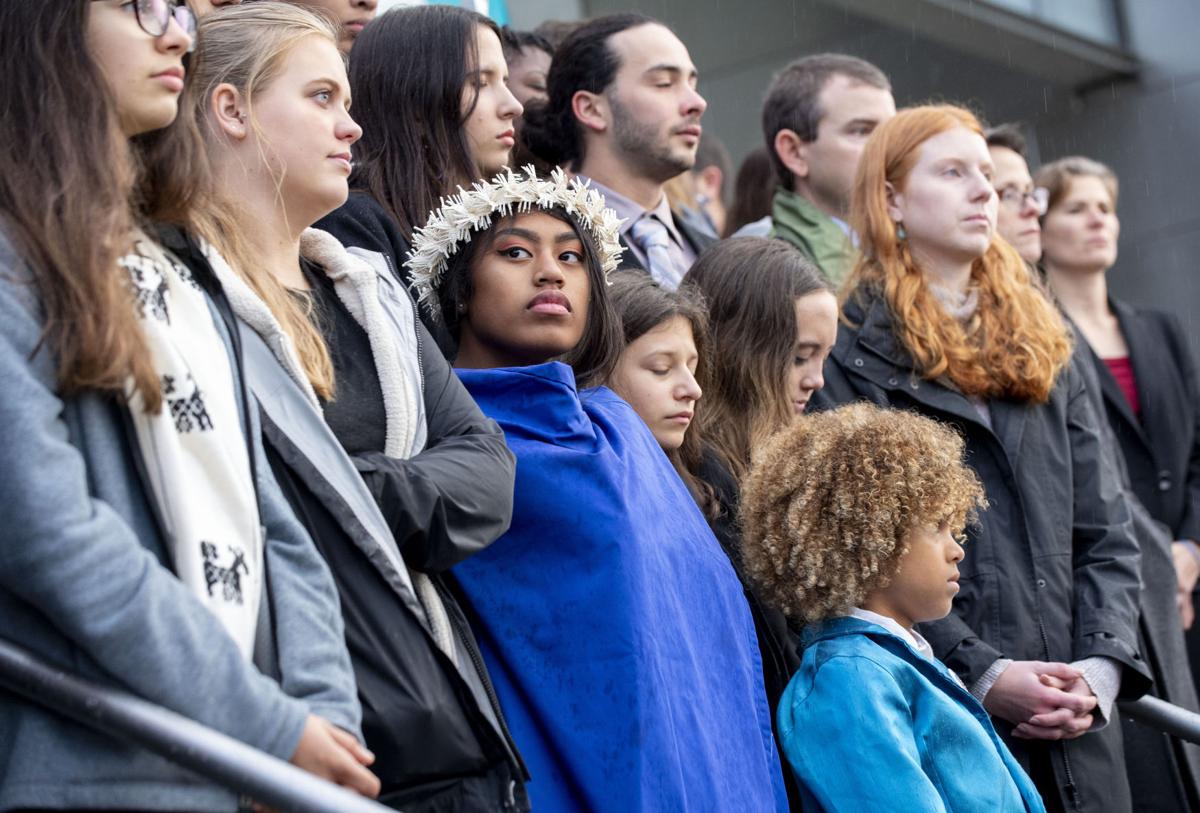 Plaintiffs in the Juliana v. U.S. climate change lawsuit gather on the steps of federal courthouse in Eugene during a demonstration in 2018. On Wednesday, Oregon’s two Democratic senators, Jeff Merkley and Ron Wyden, joined with other sponsors to tout the Children’s Fundemental Rights and Climate Recovery Resolution. 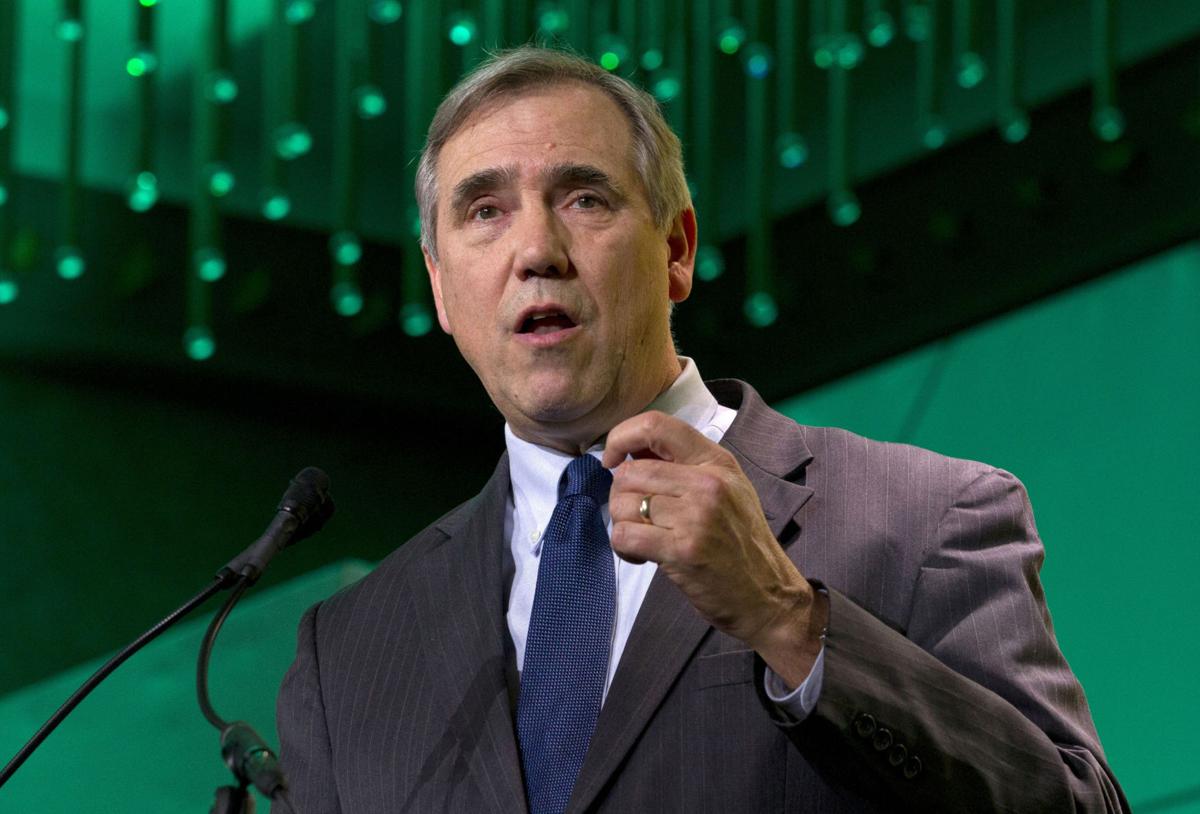 Sen. Jeff Merkley, D-Ore., speaks during the Jan. 24 U.S. Conference of Mayors meeting in Washington. Merkley announced Tuesday that he would not seek his party’s 2020 presidential nomination, but will focus on his Senate re-election.

Plaintiffs in the Juliana v. U.S. climate change lawsuit gather on the steps of federal courthouse in Eugene during a demonstration in 2018. On Wednesday, Oregon’s two Democratic senators, Jeff Merkley and Ron Wyden, joined with other sponsors to tout the Children’s Fundemental Rights and Climate Recovery Resolution.

Sen. Jeff Merkley, D-Ore., speaks during the Jan. 24 U.S. Conference of Mayors meeting in Washington. Merkley announced Tuesday that he would not seek his party’s 2020 presidential nomination, but will focus on his Senate re-election.

Alex Loznak, one of the plaintiffs in the lawsuit, is the son of Senior Reporter Carisa Cegavske.

Yet the 21 youth who say they are fighting for their lives, as well as the very existence of the planet, continue to raise awareness after a five-year battle with the federal government over the dangers of climate change.

“Climate change is literally in my backyard,” said Avery McRae, 15, of Eugene, who has had to wear a medical face mask to counter the heavy smoke emitted by fires near her home. “My future and the future of humanity is at stake.”

McRae is one of 21 plaintiffs, ranging in age from 13 to 24, who are involved in a lawsuit against the federal government over its refusal to take meaningful action to counter climate change. Eleven of the plaintiffs are from Oregon, including two — Alex Loznak and Jacob Lebel, both 23 — who are from Douglas County.

On Wednesday, a few of the plaintiffs, along with several congressional supporters, lobbied for their cause. They touted a resolution that was introduced in an effort to help give a boost to the lawsuit and prompt lawmakers to address the issue.

The Children’s Fundamental Rights and Climate Recovery Resolution calls on Congress to:

The resolution is also supported by about 50 groups, including Greenpeace USA, Amnesty International, Sierra Club and League of Women Voters of the United States.

“This climate crisis is destroying the planet for our future and that’s unacceptable,” Merkley said Wednesday. “It is the primary threat to human civilization on our planet.”

The landmark legal fight, which has been winding its way through the courts since 2015, has its roots in Oregon. It was then when University of Oregon student Kelsey Rose Juliana, now 24, filed the case with Eugene attorney Julia Ann Olson in federal court in Eugene.

Olson is the executive director and chief legal counsel for Our Children’s Trust. The case is known as Juliana v. United States.

The plaintiffs argue that the federal government’s energy policies promote and exacerbate climate change and infringe on their constitutional right to a sustainable climate. They want the court to order the United States to prepare a comprehensive energy plan that transitions the nation away from fossil fuels.

The federal government — through both the Obama and Trump administrations — has fought to quash the lawsuit just about every step of the way.

Lawyers representing the U.S. Department of Justice have argued the courts do not have the authority to compel the executive branch to cut greenhouse gas emissions from the U.S. economy. DOJ attorneys have also called the case a direct attack on the federal power structure and the separation of the executive and judicial branches. They have argued that it would subvert due process and ignore the administrative laws and procedures that guide the country’s energy policies.

In January, after nearly five years of intense legal battles, a federal appeals court threw out the lawsuit.

The two members in the majority of the three-judge panel agreed with the Trump administration that the issues brought up in the case did not belong before the courts. In March, attorneys for the youth filed a petition with the Ninth Circuit Court of Appeals asking that that court convene a new panel of 11 circuit court judges to review January’s ruling.

On Wednesday, Olson said a ruling petition could be rendered “any day.” If the petition is denied, Olson said she and her clients will consider “all appeal options,” including the U.S. Supreme Court.

In the meantime, those who spoke out Wednesday vowed to continue the fight against what they see as a climate crisis.

Congresswoman Jayapal, whose district includes much of Seattle, said she is discouraged by the worsening climate yet encouraged by the actions of the plaintiffs.

“We know that these fires are getting worse every year. We absolutely cannot wait, our children cannot wait,” she said. “These youth set an example of true leadership and we should heed their example.”

Congressman Rush, 73, bemoaned the job his generation has done in being stewards of the planet.

“We’re leaving you a tattered world,” he said.

Good. We have precious time to act, and a lot to do, to avert catastrophe and make things merely awful. Feedback loops are kicking in, what with fires, ocean acidification, release of clathrates, tundra thaws, and glacial collapses in the Antarctic. And so much more. I think back to the dives I was able to do in coral reefs, and tropical jungles I got to walk in, and skiing in the Alps as a kid, and think: I and my generation have really screwed the next ten or twenty generations--at a minimum.