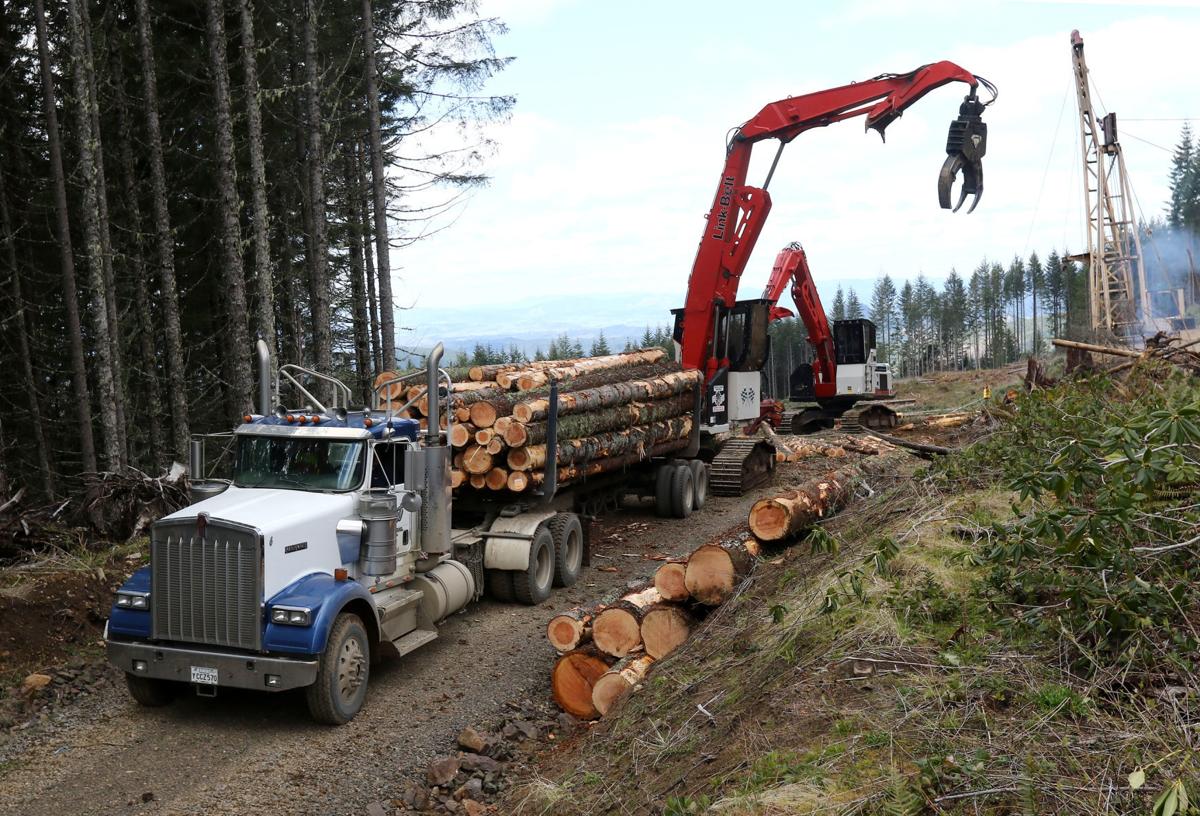 A logging truck prepares to haul a load of timber from a Plikat Logging site east of Sutherlin in 2017. 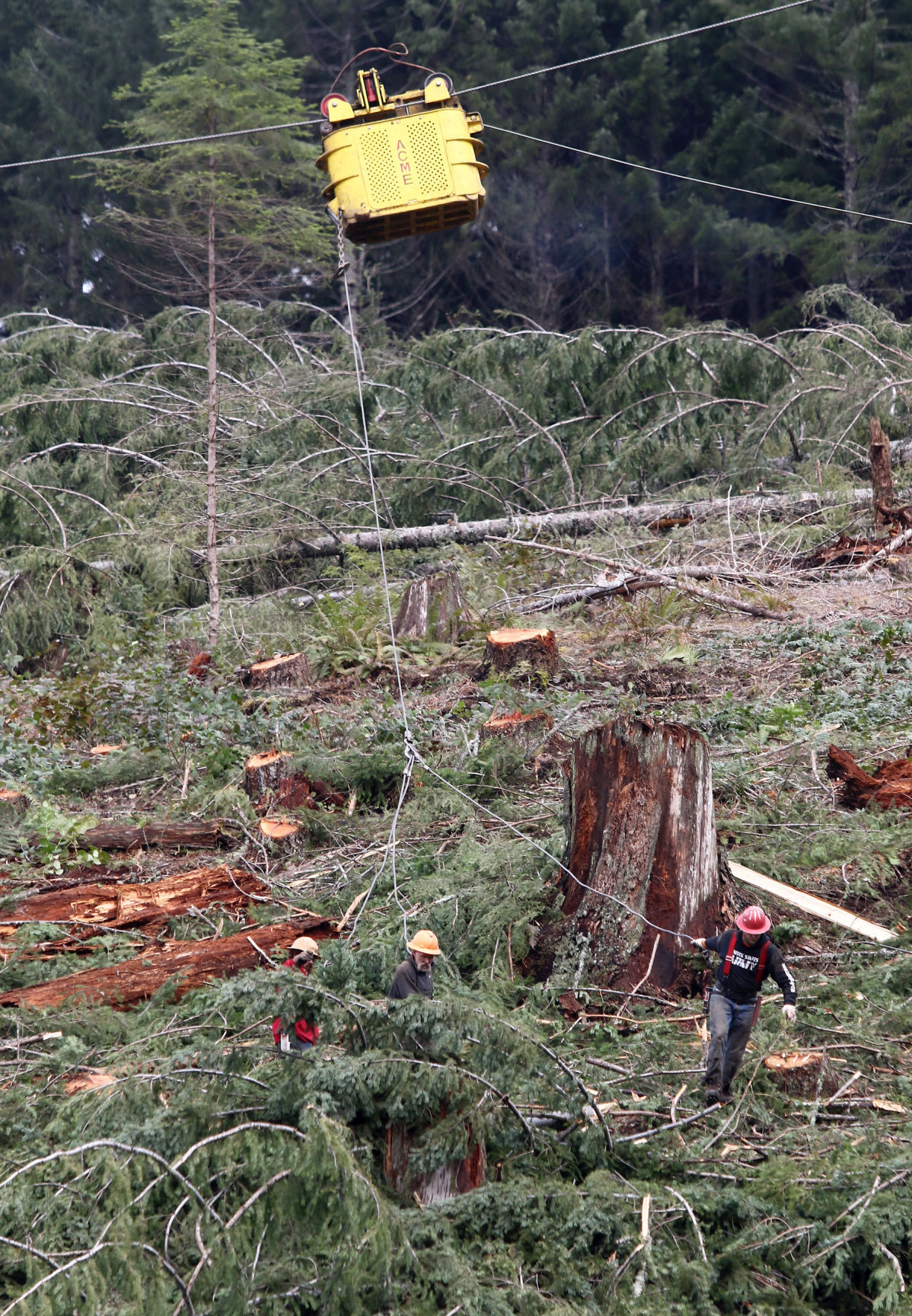 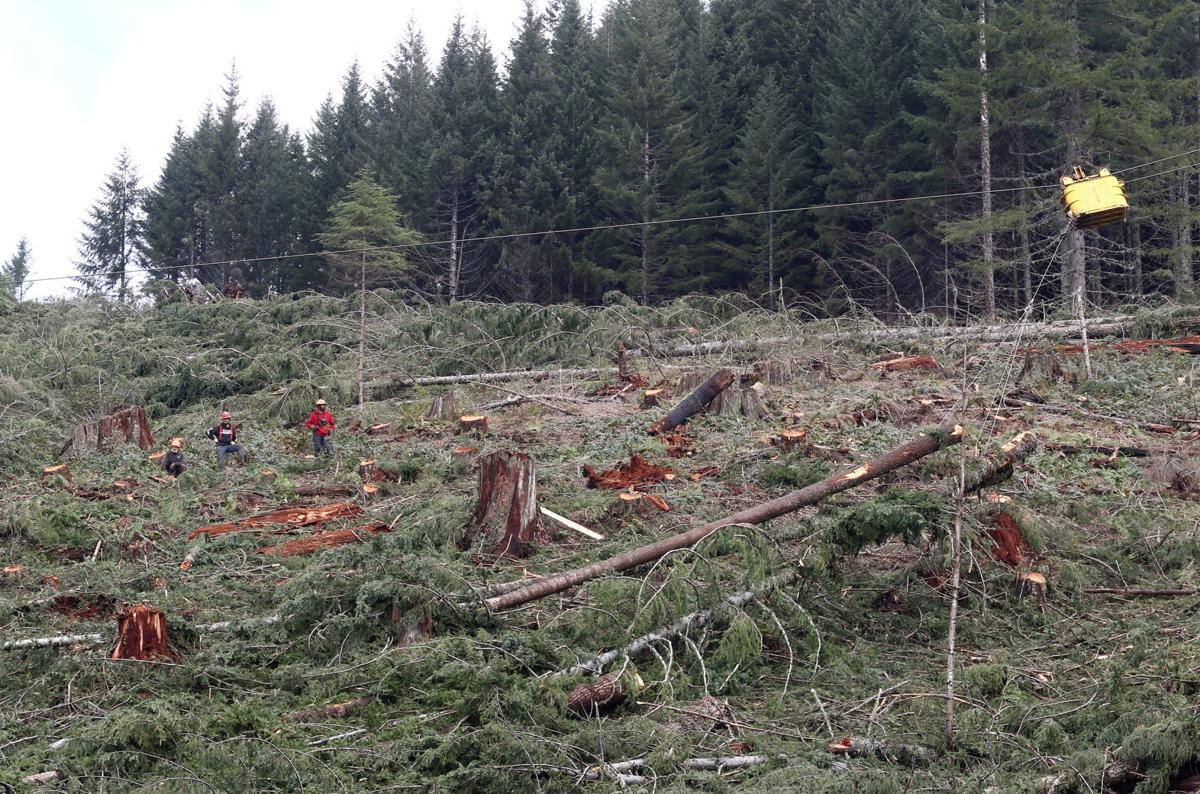 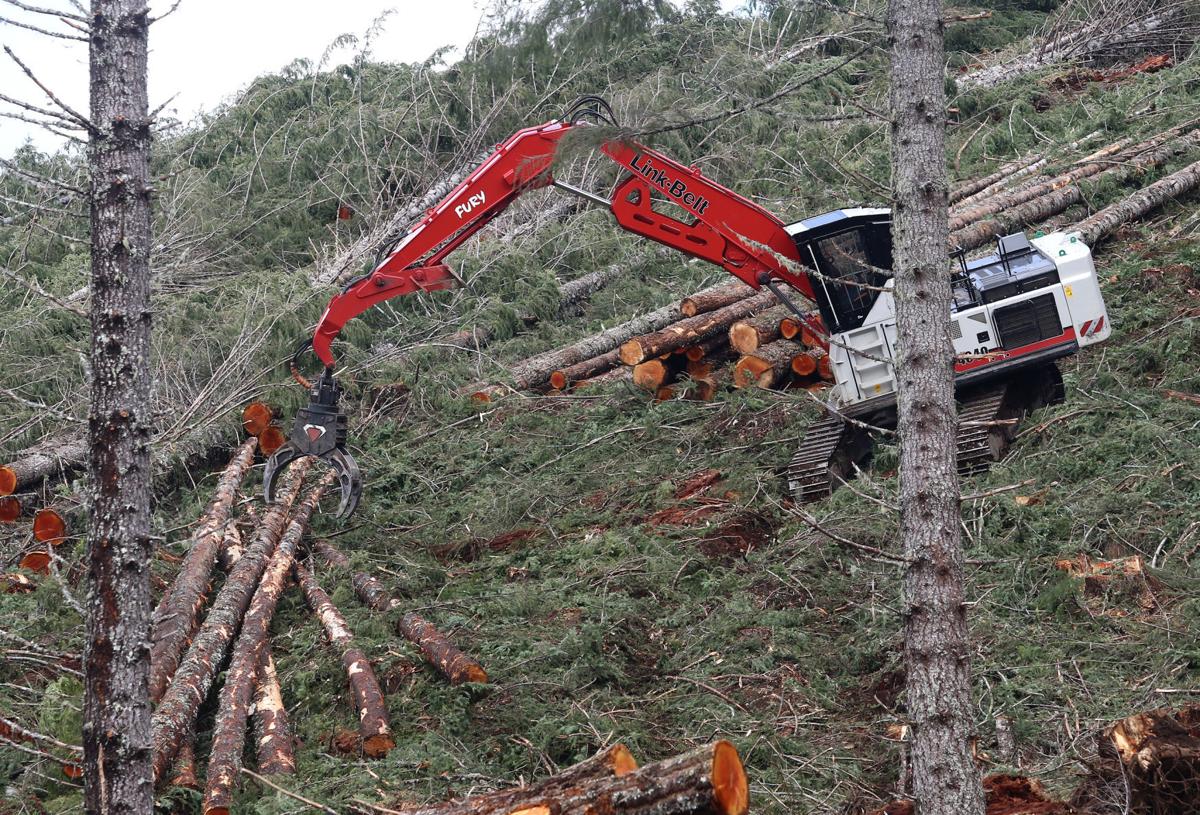 A machine stacks logs on a mountainside at a Plikat Logging site east of Sutherlin last Friday. 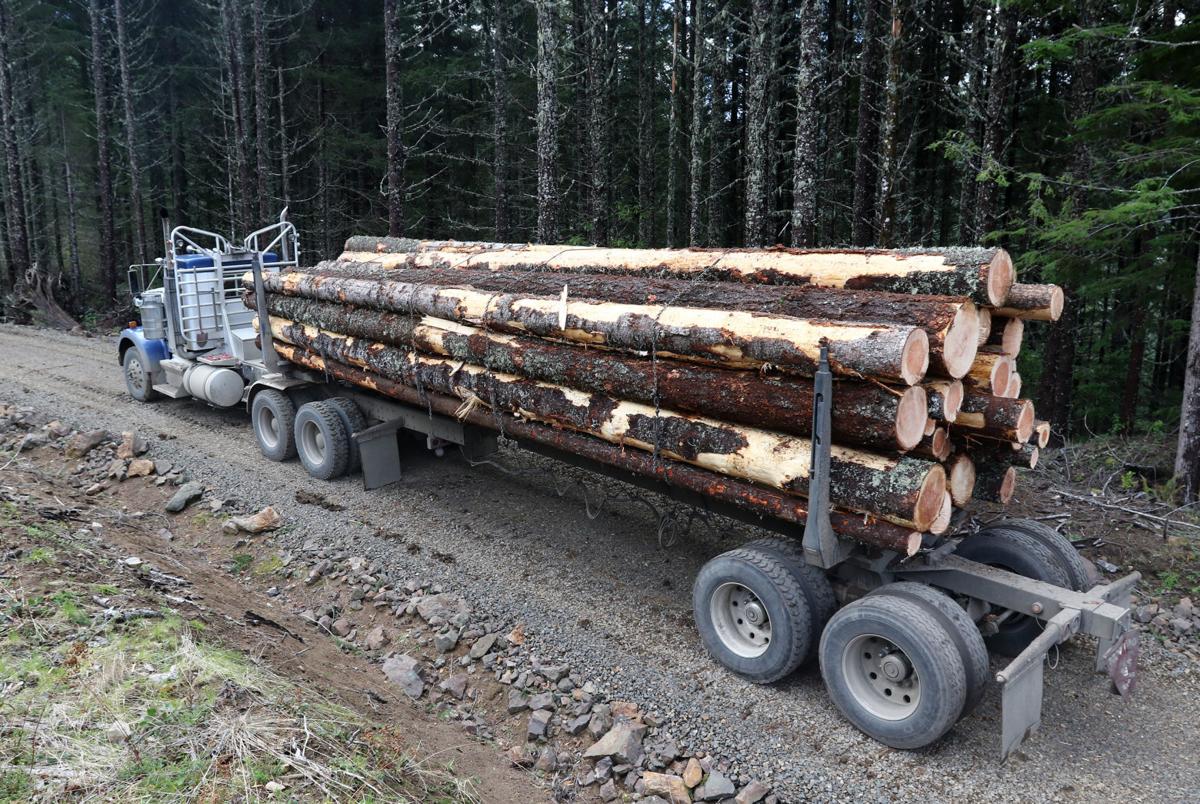 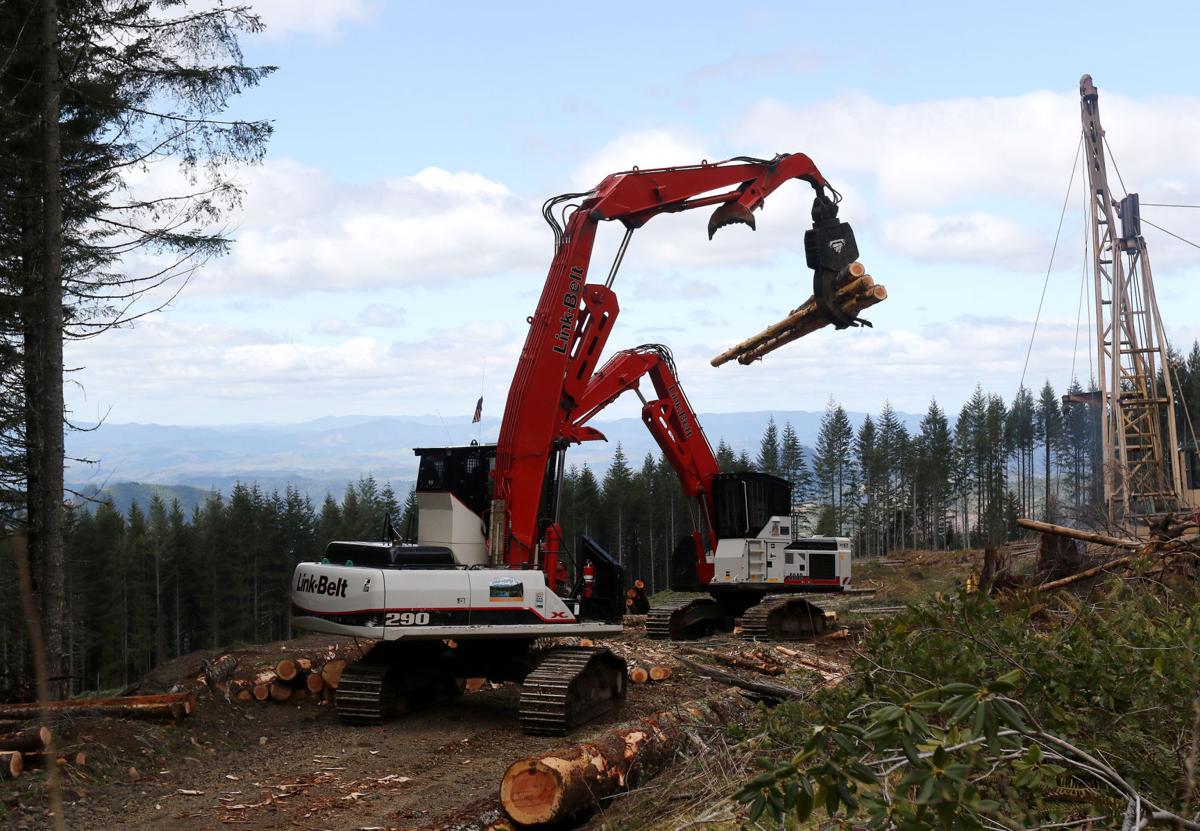 A crew of loggers work at a Plikat Logging site east of Sutherlin on Friday. 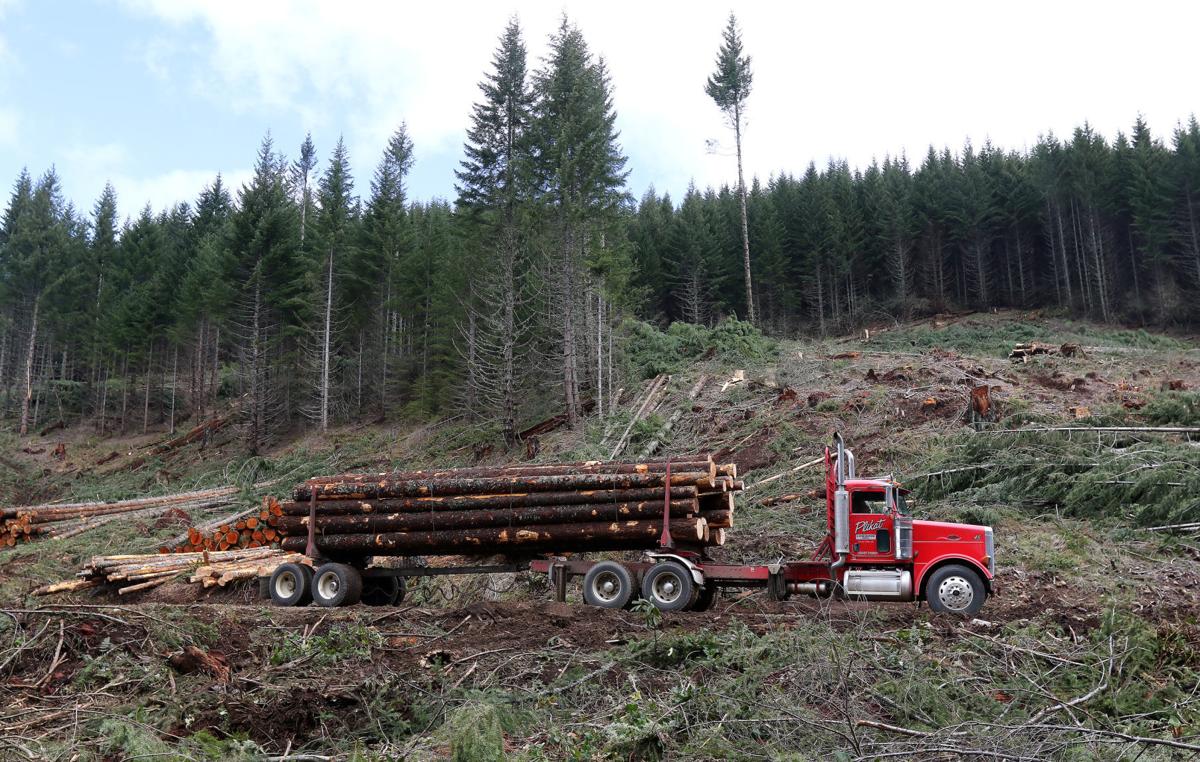 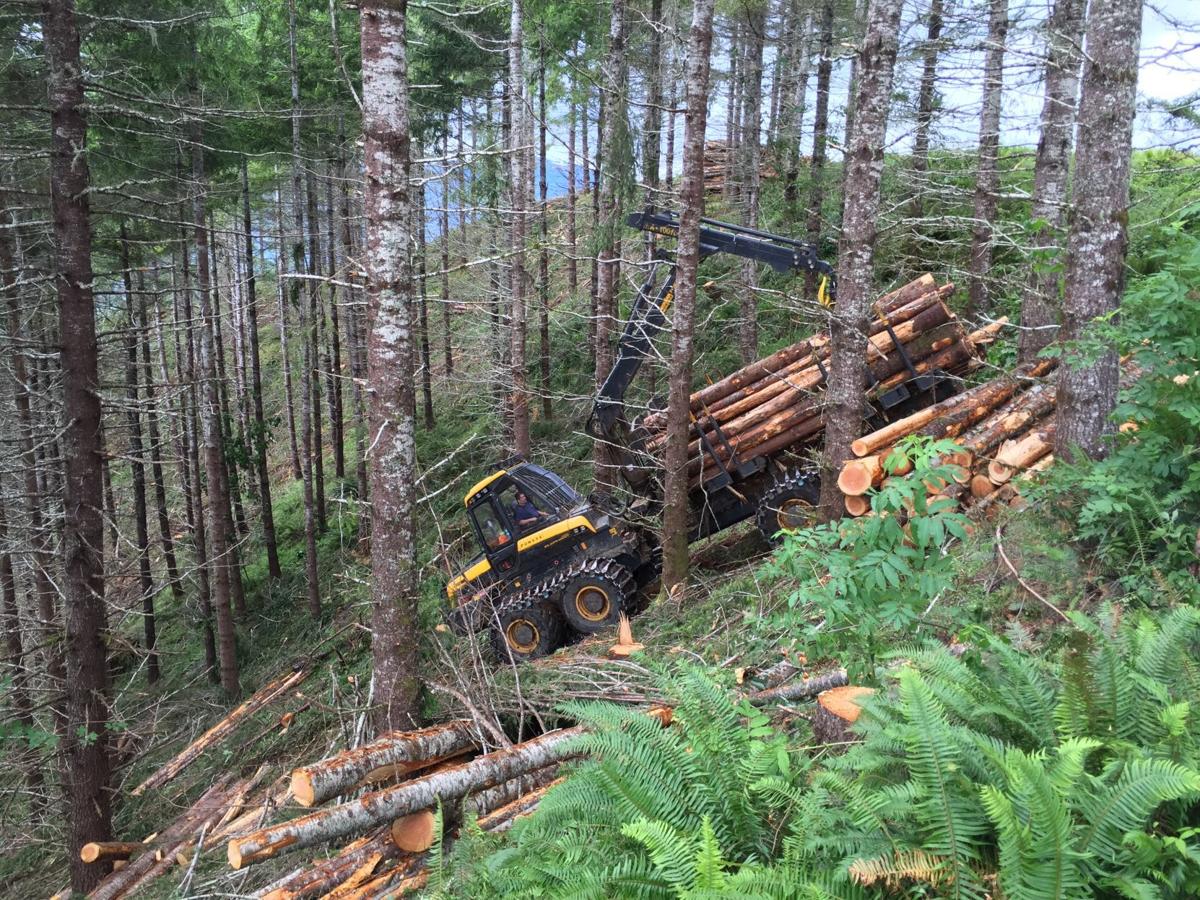 A tethered Ponsse Elephant King Forwarder picks up logs and carries them up a 65 to 70 percent slope in a thinning job. 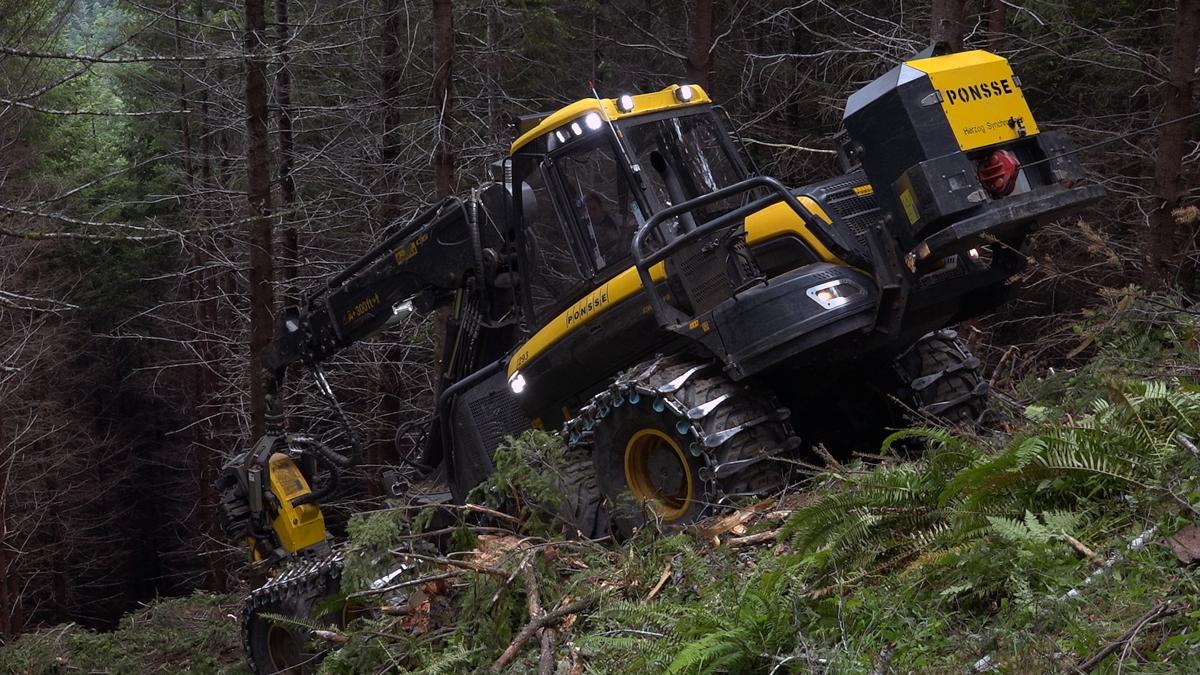 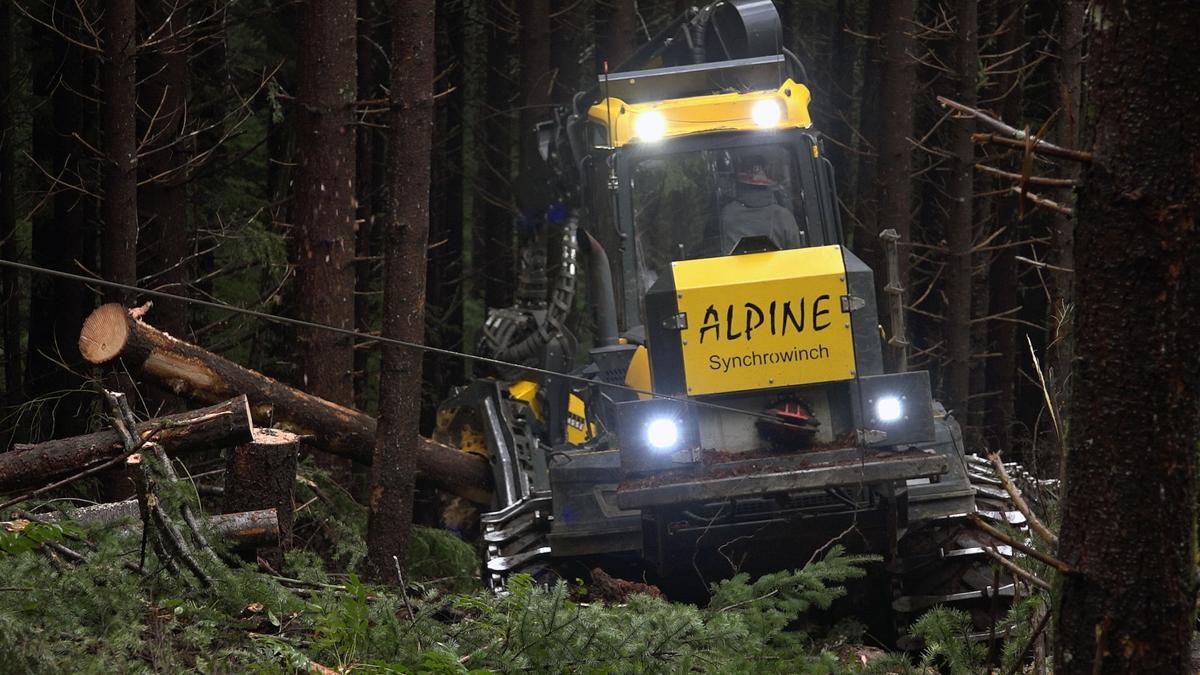 A logging truck prepares to haul a load of timber from a Plikat Logging site east of Sutherlin in 2017.

A machine stacks logs on a mountainside at a Plikat Logging site east of Sutherlin last Friday.

A crew of loggers work at a Plikat Logging site east of Sutherlin on Friday.

A tethered Ponsse Elephant King Forwarder picks up logs and carries them up a 65 to 70 percent slope in a thinning job.

This is the second in a four-part series about technology used in the timber industry.

Technological advances in harvesting timber can not only make operations safer and more efficient, but address environmental concerns and help foresters plan for the future.

“We love to see innovation in wood products all the way from forest to frame,” said Sara Duncan, director of public affairs for Oregon Forest & Industries Council. “The folks in the timber industry are passionate about what they do and certainly interested in finding new ways to do it.”

Though there’s a misperception that the timber industry isn’t innovative, she said, the work itself requires the industry to adapt and advance in technology.

Plikat Logging of Camas Valley won the Oregon Department of Forestry’s annual Operator of the Year award for a job west of Drain involving a highly sensitive fish stream. The crew left a wide forested area, known as a riparian or stream buffer, along the banks to provide shade and protection. The crew flew the logs with cables close to 2,000 feet above the stream to minimize environmental impact when bringing them to a landing.

Though Plikat Logging has employed full suspension logging for quite a while, owner Wally Plikat said the company is always updating its equipment and adapting to new rules, like one requiring wider stream buffers.

“We stay up with the times and improve our technology with equipment so we’re more efficient,” Plikat said. With computerized machinery, logs are processed more quickly and are cut into specific lengths and diameters, which saves a lot of time compared to measuring each log by hand.

The computerized equipment has been a challenge for some of the veteran loggers, Plikat said, but it can also attract the younger generation to a field that’s struggling to find young people with good ethics for hard work.

New techniques can also help logging crews operate with machinery on steeper slopes than ever before. While most work can be done on a 35 to 40 percent slope, tethered logging can occur on slopes with 70 to 75 percent grades.

“I’m just impressed with what the timber companies are doing these days,” Plikat said. “They’ve invested a lot of money and effort into growing trees in Oregon and hopefully they’ll continue to do that.”

One such technique is tethered logging, which allows for only two people to operate a harvest. One machine runs down a steep slope while tethered through a winch system to another machine on a ridge.

Seneca Jones Timber Company has hired professional operators to use this system, by equipment manufacturer Ponsse, on its timberland near Glide.

Ted Reiss, Seneca timberlands manager, said the Ponsse equipment is state of the art, computerized machinery meant to have a light touch on the land.

“Their equipment is a good example of highly advanced technology being utilized in the forest right now,” Reiss said, adding that foresters need to have training and experience working with technologically advanced equipment to use the tethered logging approach.

Seneca contracts Philomath-based Miller Timber Services to do the job. The contractor has also worked for Lone Rock Resources of Roseburg and other landowners.

Forester Matt Mattioda of Miller Timber said the technology for tethered logging has been used for quite some time now in Europe, but it’s new to North America. Miller Timber is the first to use the Ponsse system on this continent. The company received the first tethered machines three years ago and is planning to have about 10 by this summer.

Other tethered logging equipment is used only for cutting or felling trees, but the machinery Miller Timber uses performs the entire process for both thinning and final harvest.

“We harvest the trees at the stump, we process trees into logs at the stump, and then the second machine, which is a forwarder, takes the logs and brings them back to the roadside tethered,” Mattioda said.

This saves time compared to the traditional slope harvest method of using a yarder to drag trees to a landing where they’re processed and then loaded onto a truck. Miller Services wraps chains around the tires to add more traction.

This technology also helps to keep the foresters safe, off the ground and inside machinery designed for roll over and falling object protection. The computerized displays and maps within the cab show the operators where they are in relation to the landscape, including property lines, fish bearing streams and other concerns.

Each job requires less people, which opens up the amount of acreage that can be worked by other employees.

Mattioda said tethered logging allows for a better utilization of the resource, as there is less breakage and less wood waste when trees are processed down to 2-inch diameter logs right at the stump.

“We program these machines with the optimal values for log length and diameter based on a value matrix of what the logs are worth to the end user,” Mattioda said. No slash piles are left behind, as the rest of the tree material stays near the stump to decompose and provide nutrients for the soil.

“This new technology is not your grandfather’s way of doing things anymore, it’s much more finessed than it used to be,” Mattioda said. “It’s basically smarter, safer and more environmentally friendly.”

He added a pair of the Ponsse machines used for tethered logging can cost over a million dollars, an initially high investment cost that pays off over time.

Planning and executing the harvest

Lone Rock Resources is also harvesting on steeper ground with safer equipment that allows workers to be inside the cab instead of cutting trees by hand with power saws and setting chokers.

Chris Arnold, logging administrator for Lone Rock, said timber companies are cutting smaller trees than in the past, about 40 to 50 years old, which can be processed more efficiently with a machine called a Dangle Head. It can pick up the cut trees, cut the limbs off and process them to the right length and diameter.

“There’s a resurgence with yarder logging grapples, an old technology coming back, and that’s due to camera systems improving,” Arnold said. There’s now a camera in carriages that allow the operator of the grapple system to see on a screen a high definition view of the production area, even if fog or rain limits visibility.

Kevin Tuers, Geographic Information Systems inventory forester at Seneca Sawmill, uses technology to map and monitor the company’s trees in real time, which helps in decision making for harvests. GIS has been around for years, he said, but it has advanced to help foresters hold information in one area.

In the data base, Tuers can see all the different types and ages of timber within Seneca’s ownership across western Oregon. It also shows boundaries, locations of fish-bearing streams and other details that help foresters do their jobs.

“We keep track of how old they are, how many trees are there, how much board feet,” Tuers said. “Every year we have a growth program called FPS, Forest Projection Software, that uses data from all over the West Coast to show projections of how the trees will grow.”

According to sustained yield practices, Seneca grows more than what is cut, so GIS mapping helps the foresters make sure they’re cutting and leaving behind the proper amount of timber.

“It’s important to know where those stands are, how much timber is out there and how it’s growing so we can plan where we can harvest and how we can do it for the next 55 years, and plant and regenerate for the future,” Tuers said.