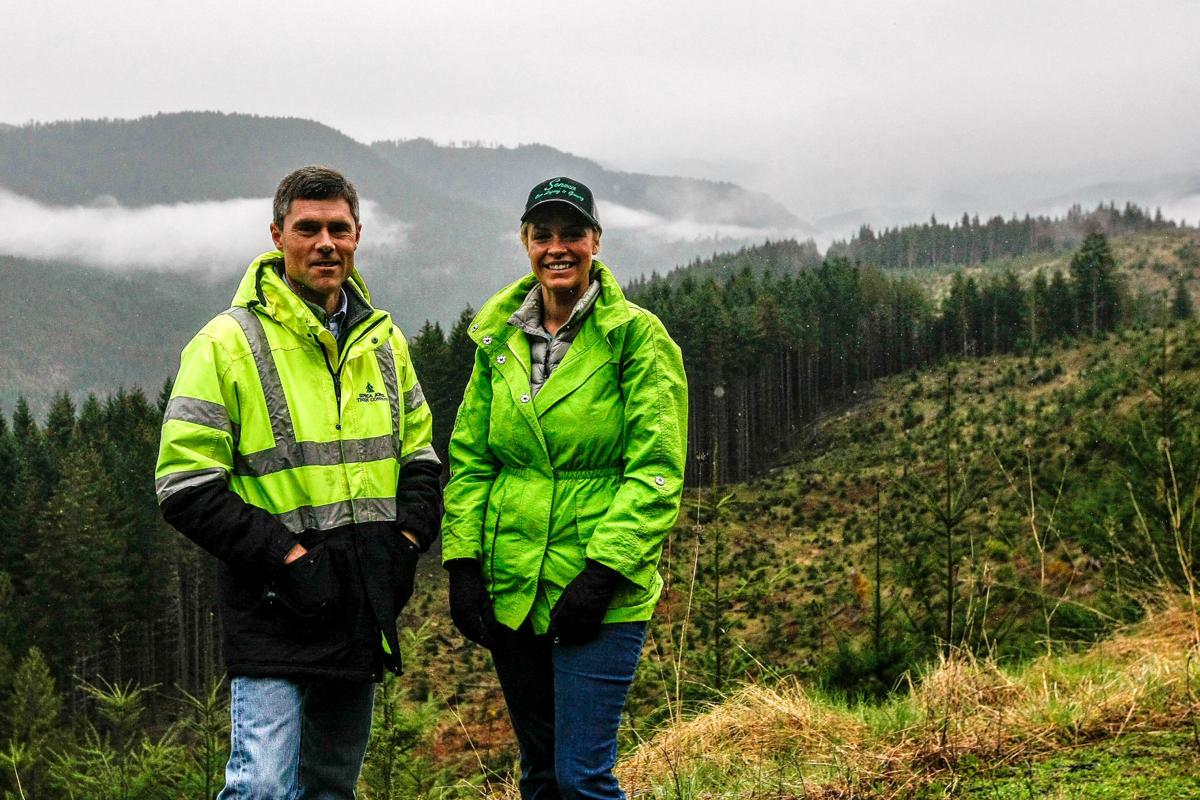 Ted Reiss, left, and Casey Roscoe of Seneca Jones Timber Company pose for a photo on company property earlier this month. Behind them is a recently planted clearcut. 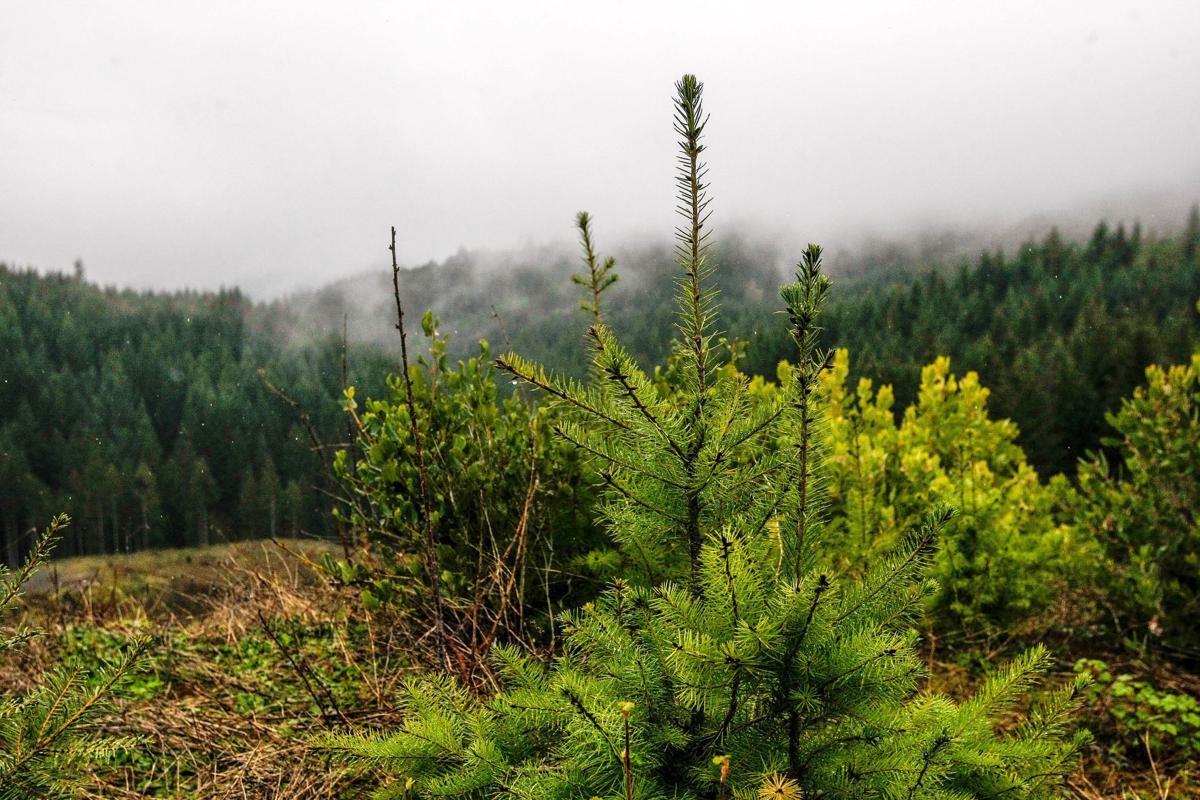 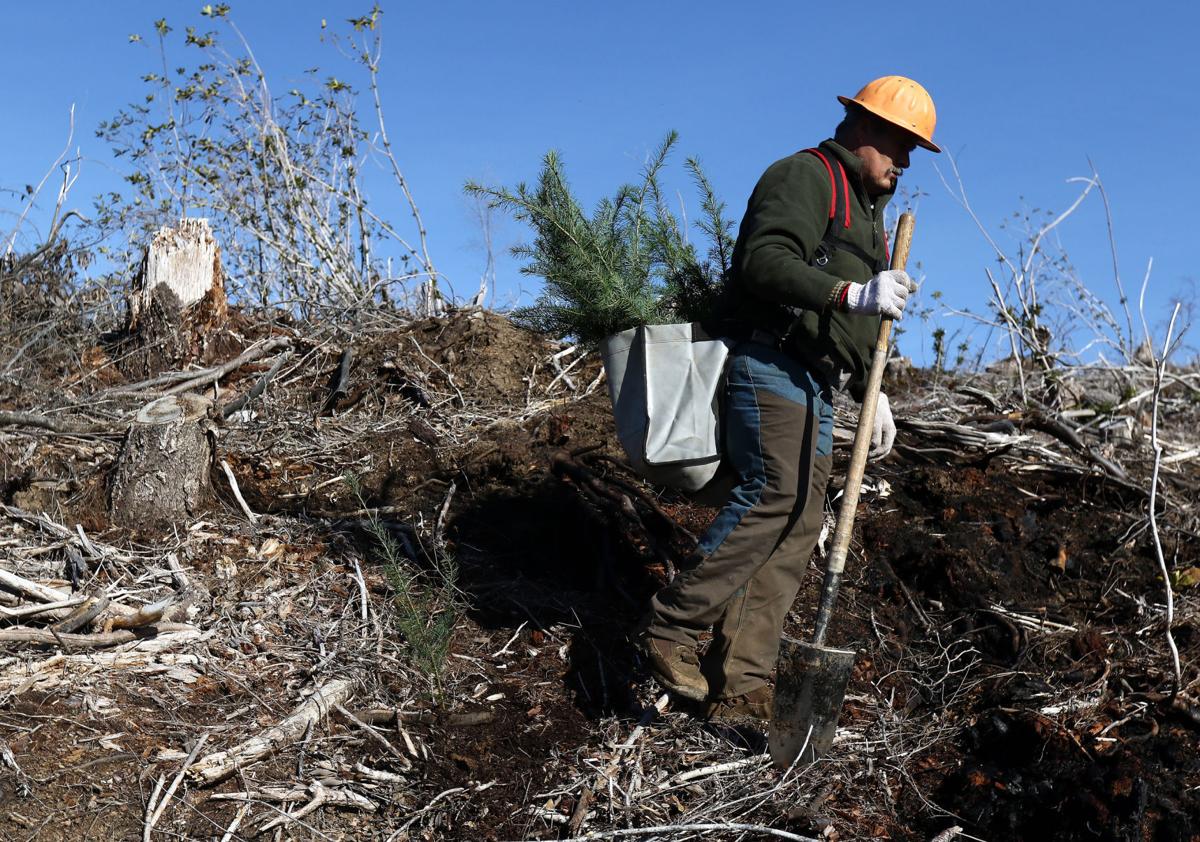 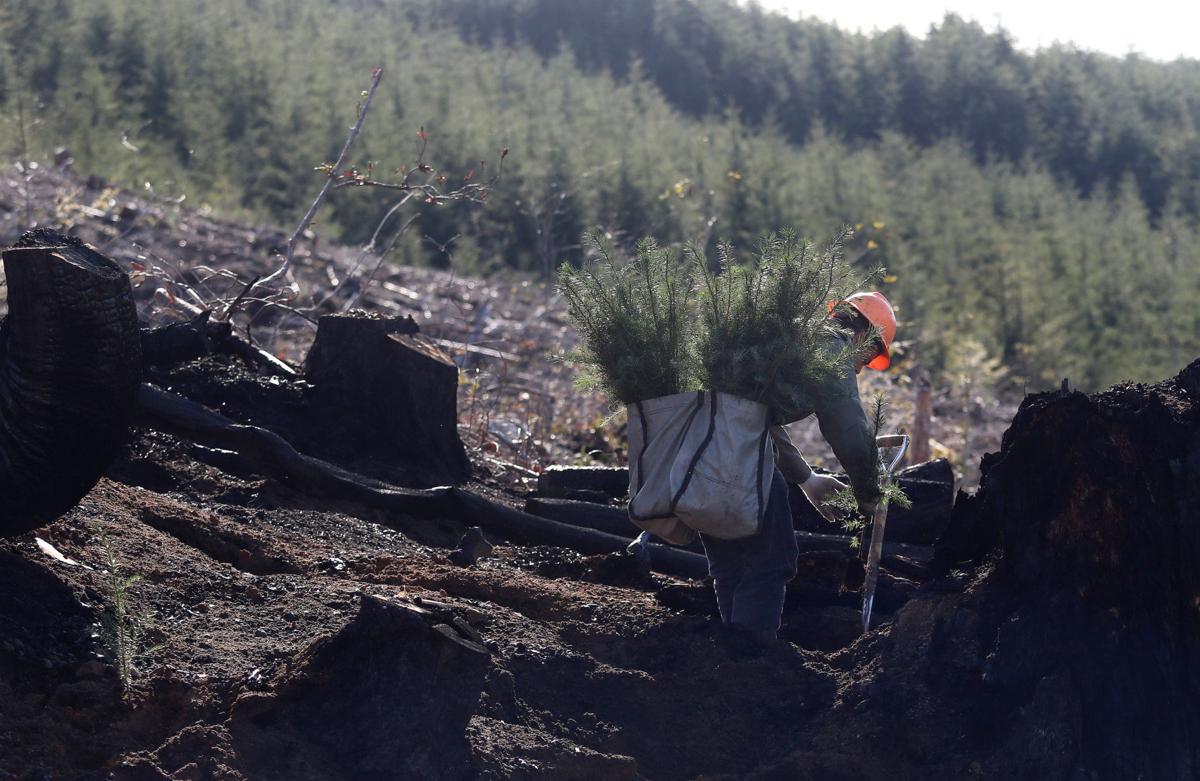 This is the first in a four-part series about technology used in the timber industry.

The wood products industry has implemented technological advances into each step of the process, from growing seedlings to monitoring tree health, and from milling to creating finished boards.

Learning how to best grow trees from seed onward is a constant endeavor, according to Jake Gibbs, director of external affairs for Lone Rock Resources. The Roseburg-based company sources its seeds locally to ensure it plants seedlings in the places they originated.

“The technology of nurseries has improved, so now they are more consistent and they grow a healthy little tree that meets the specifications of each landowner,” Gibbs said.

Lone Rock used to grow its seedlings in a field, but with better understanding of the seeds’ biology, the company begins growing them in green houses with controlled environments so each tree gets enough water, sunlight and room to grow.

Much of timber management and approaches to growing are shared between timber growers and Oregon State University College of Forestry through cooperative research so they can all benefit from the best known science available.

There are research cooperatives to address every category, from health and nutrients to disease prevention.

“We are in several research cooperatives looking at improving tree growth in young trees, whether with genetics, or with how we plant trees, how we get nutrients to trees and grow bigger, better trees,” said Kevin Tuers, Geographic Information Systems inventory forester for Seneca Jones. “It’s our livelihood so we’re trying to grow the best trees we possibly can for the future.”

Several cooperatives have considered trials with tree genetics. Researchers collected seeds from different trees, elevations and zones in Oregon. Through a series of measurements, they determined the best performing trees. From that group, they collected cones and conducted second generation tests to find the trees that will grow faster, healthier and more resistant to factors like drought or competing vegetation.

Researchers do not alter the genetics of the trees, but test them to find which are the heartiest growers of the bunch.

Growing seedlings with higher chances of vitality allows foresters to grow fewer trees and space them out with enough room, as they don’t have to account for as much mortality as in the past.

“We start thinking about forest density at the seed level, and that practice has improved and changed over the decades,” Gibbs said. “We have healthy seedlings to plant so we’re helping reforestation efforts to minimize the need for herbicide applications.”

Herbicides are used to suppress competing vegetation and give seedlings a better chance of survival. Starting with healthier seedlings allows them to succeed faster with less herbicide use.

With aerial drones, radar technology and helicopters, foresters are able to map their trees from the sky with enough detail to determine which areas need to be addressed, thus improving their ability to manage the land.

Roseburg Forest Products began contracting with other agencies to fly drones over their properties in the past few months, after ice storms in December left an inch of ice on some of its trees.

“We used aerial drones and radar technology to map our timberlands west of Eugene and the coast to identify pockets of damage in that storm,” Rebecca Taylor, corporate communications director, said. “We have really neat footage and comparative radar images from last October compared to current images, and we saw where we needed to address some damage.”

Studying the aerial images can also ensure the foresters’ safety. From the sky, foresters can detect trees with snapped tops and others leaning over from damage, so they know what they’re dealing with before they go in to clean up those areas.

Eric Geyer of Roseburg Forest Products said without the technology, Roseburg wouldn’t be able to address those issues as well and as precisely as it can now. Ice storms can create patches of damage throughout an otherwise healthy forest.

“If we didn’t have that technology, we wouldn’t know what was out there,” he said. “This allows us to be very surgical and pull some trees and allow the rest to grow.”

Knowing the location of the damaged trees can lead to a faster clean up, which helps prevent the spread of infestation into healthy standing trees and the build up of fuel during fire season.

“Our whole objective there is to minimize the disturbance on the landscape and be as efficient as possible in taking logs out of the woods,” Geyer said.

The drones help the companies find sites where landslides, lightning strikes or diseases like Swiss needle cast may have affected the trees.

In addition to inventory plots from the ground, Tuers and his crew with Seneca Jones use drones to fly over reforested harvest units and count the new young trees using a program called Drone2Map.

“We make sure we have our plantations well stocked so we can grow the optimal amount of trees. We take a bunch of photos of that, and this program puts all the photos together and brings it to our GIS,” Tuers said. GIS, or Geographic Information Systems, allows Tuers to keep track of inventory.

Lidar, also called ladar, is another innovation used by companies like Seneca and Roseburg, as well as state agencies. A combination of light and radar, lidar shoots laser lights down from the sky that bounce back up to create a digital image of the slopes and steepness of the ground surface, as well as the shape, height and density of trees.

“It’s extremely precise and you can actually tell all the land forms down to the matter of an inch,” Geyer said.

Tuers said lidar, drones and GIS allows the foresters to analyze data quickly. The foresters also have programs on their phones so they can track where they are in the field in relation to the data in real time.

“It’s a whole new world out there with technology,” Tuers said.

Lone Rock Timber monitors the growth and vitality of its forests by physically going out to the field and collecting data.

“We use technology to take that data and information and put it into computer programs to monitor those forests with virtual reality, and see how those forests are going to grow over time,” Gibbs said.

Foresters don’t have to revisit each site every year because the programs have enough information to track how the forests will grow.

Although growth and yield models have been around for decades, they continue to improve with each passing year.

“Information is more and more available to our foresters in the field,” Gibbs said. “As technology in all of our lives changes and improves, it’s being implemented in forestry as well. It’s very contemporary and exciting and constantly changing.”

BAC Trees services the greater Houston area with tree prunning. Tree prunning is essential to providing the desired shape for your trees. BAC Tree specialists has tree climbers that scale the highest trees. We are the Woodlands and Houston best tree company. Tree Removal