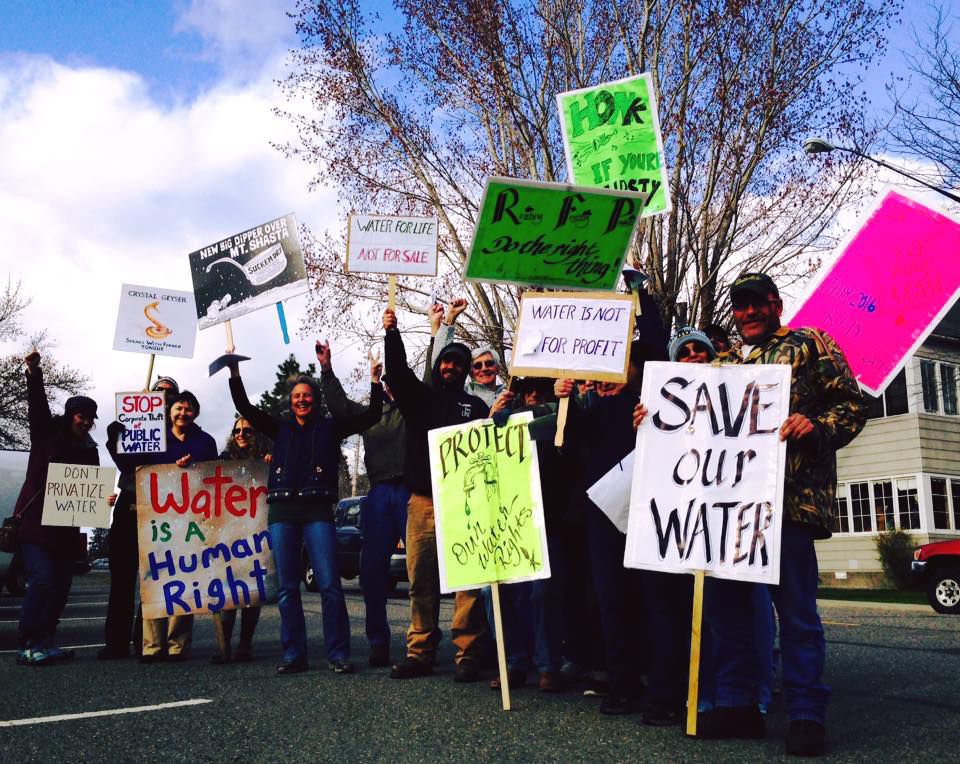 People protest in Weed, California, for the city to keep using a water source on Roseburg Forest Products property in town. 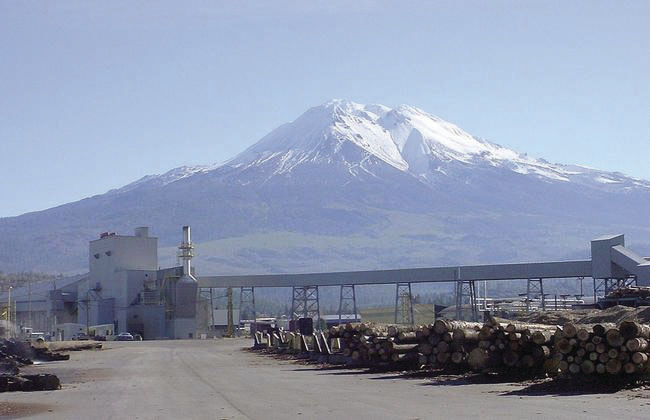 A Roseburg Forest Products mill in Weed, California, has been at the center of a battle for water rights in the city. 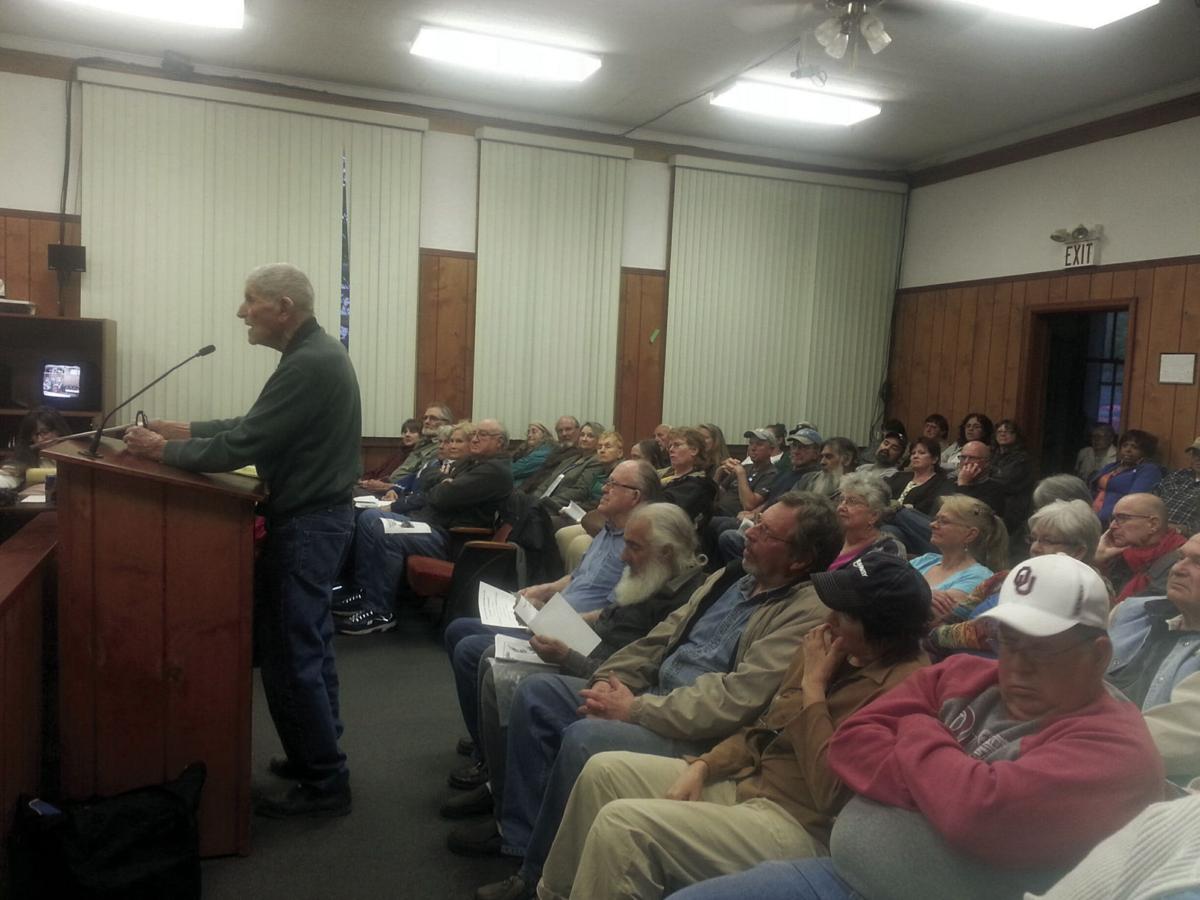 Jim Gubetta speaks to the Weed City Council during the public comment period of a May 5 council meeting. He believes Weed owns water rights at the center of a controversy with Roseburg Forest Products, he said. 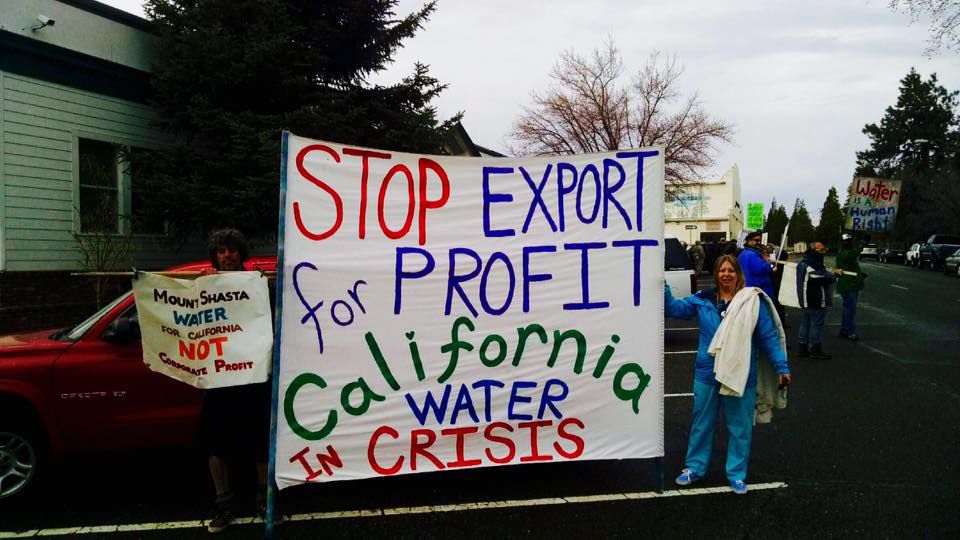 Roseburg Forest Products owns the water rights to a spring in Weed, California, which has caused some protests in the area this year.

People protest in Weed, California, for the city to keep using a water source on Roseburg Forest Products property in town.

A Roseburg Forest Products mill in Weed, California, has been at the center of a battle for water rights in the city.

Jim Gubetta speaks to the Weed City Council during the public comment period of a May 5 council meeting. He believes Weed owns water rights at the center of a controversy with Roseburg Forest Products, he said.

Roseburg Forest Products owns the water rights to a spring in Weed, California, which has caused some protests in the area this year.

The fate of a small northern California town’s drinking water is in the hands of the Oregon-based company, Roseburg Forest Products.

The city of Weed waters half its population from the Beaughan Springs source that flows through RFP’s property in town. The city had a lease to access the company’s rights to the water for the last 50 years. That lease expired earlier this year.

“Despite five years of negotiations in good faith with Roseburg Forest Products, the city of Weed has not been able to reach agreement on contract renewal or extension to continue to receive water for the residents of the city,” a Feb. 19 city press release reads.

“The health and safety of residents and property within the city are at risk,” it adds later.

Residents are scrambling to put together broken pieces of a muddled picture as city staff and company representatives disagree on some fundamental issues, like who actually owns the water rights.

Who really owns the water?

A search in the California Water Resource Board’s water rights database brings up nothing for the city of Weed, and just one inactive right to a different creek is under Roseburg’s name. A resource board spokesman could not provide more information by press time.

The issue is particularly convoluted because the lumber mill in Weed has changed hands several times since its founding in the late 1890s. With that change of hands came a change of water rights, but some Weed residents say the rights transferred to the city in 1982.

Weed councilor and former mayor Bob Hall points to a 1982 letter from a California watermaster as proof that the rights were turned over to the city of Weed. Hall is part of an advocacy group arguing that the water rights belong to the city.

The letter was written to International Paper Co., which was the lumber company that owned the property and the rights at the time, when it sold its assets to Roseburg Forest Products. In it, the watermaster allocates a specific part of the water rights “for domestic and municipal purposes to the City of Weed” and industrial purposes for the company.

“In other words, the court said you’re to use it for this, and this is how much you’re allowed to use,” Weed Mayor Ken Palfini said. “Does Roseburg have the ability to change that?”

Since 1982, Weed has leased its allocated amount of water for municipal purposes, and Roseburg Forest Products has sold part of the other rights to Crystal Geyser, a water bottling company.

Around 2011, five years before Weed’s lease expired, the city and company entered into negotiations. The company did not want to continue leasing its water rights to the city, Palfini said, and it did not disclose what it wanted to do with the rights when the city’s lease expired.

“As far as I’m aware, negotiations were never about them wanting to give us an extension of the lease,” he said. “The negotiations from their standpoint was to get us off of that water and to develop an alternative water source.”

“We never told the city we would not renew the lease,” she said. “That’s a really important component here. That was never said.”

The city and company ended up signing an agreement that allows the city to use the water for up to 15 years. In the meantime, Weed has to show that it is making “best efforts to obtain an alternate water supply,” reads the agreement. It will pay $97,500 every year for the water, which will increase by 2 percent each year after five years.

Finding a new source of water will not be as easy as drilling a few wells, Palfini said.

While the city already has about three wells providing water to the south end of town, it lacks the infrastructure to get the water to the northern homes and businesses that need it.

Installing that infrastructure will be costly, and will likely stir up some controversy as the city works through other people’s properties.

In the end, Palfini hopes to find a way to prove that the water rights truly belong to the city.

“In my opinion, we’ll most likely end up in some form of court decision,” he said. “Right now we are looking at different avenues. We have engaged a separate engineering firm to take one last gasp at seeing if we have missed something in the ownership records, or how we could be determined as an owner.

“We haven’t given up on the fact that there is a potential link somewhere,” he added. “We’re at least somebody that uses the water, and you cannot take that right away.”

Here is information that the California State Water Resources Control Board has located regarding the water right: The water right serving the City of Weed is an adjudicated right identified in the Shasta River Adjudication, Decree No. 7035 (see Paragraph 230, Long Bell Lumber Company). http://www.waterboards.ca.gov/waterrights/board_decisions/adopted_orders/judgments/docs/shastariver_jd.pdf.

The right identifies year-round diversion for domestic and municipal purposes within Town of Weed and industrial purposes at the manufacturing plant of said Long Bell Lumber Company. Bottling of water is considered an industrial use and can be considered part of a municipal use. The ownership of this right has changed through the years from Long Bell Lumber to International Paper Company and thence to Roseburg Forest Products. In the past, the City operated under a long-term lease agreement that apparently expired.

The diversion is regulated by a local watermaster, Scott Valley and Shasta Valley Watermaster District (District). The District contracts with GEI Consultants to do the actual field work.

It always makes me unhappy when I hear about Californians running out of water, and at the same time see bottled water for sale in other states (Arizona, Oregon, etc) that say right on the bottle that the water was bottled in California! Reading between the lines in this article, it sounds like RFP wants to kick Weed residents off their spring so that RFP can expand the Crystal Geyser spring water bottling business. How appalling! Bottled water wastes petroleum for creating the plastic bottles, shipping the bottles around the country, and then further pollutes the environment with discarded bottles. Meanwhile, the corporate bigwigs are laughing all the way to the bank as they slowly squeeze local residents out of cheap, clean water from the tap. Tell your friends and neighbors to stop buying bottled water. If local tap water isn't clean enough, install a reverse osmosis or water distillation system.