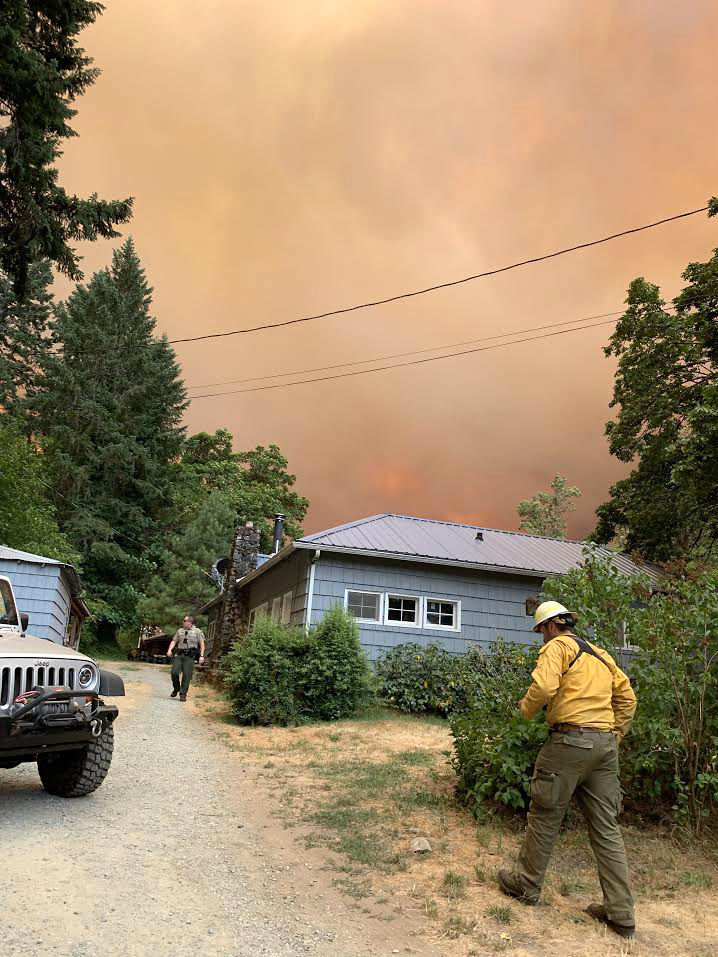 Jayonna Hunnell’s home shortly before the Milepost 97 Fire forced her and her family to evacuate Thursday. 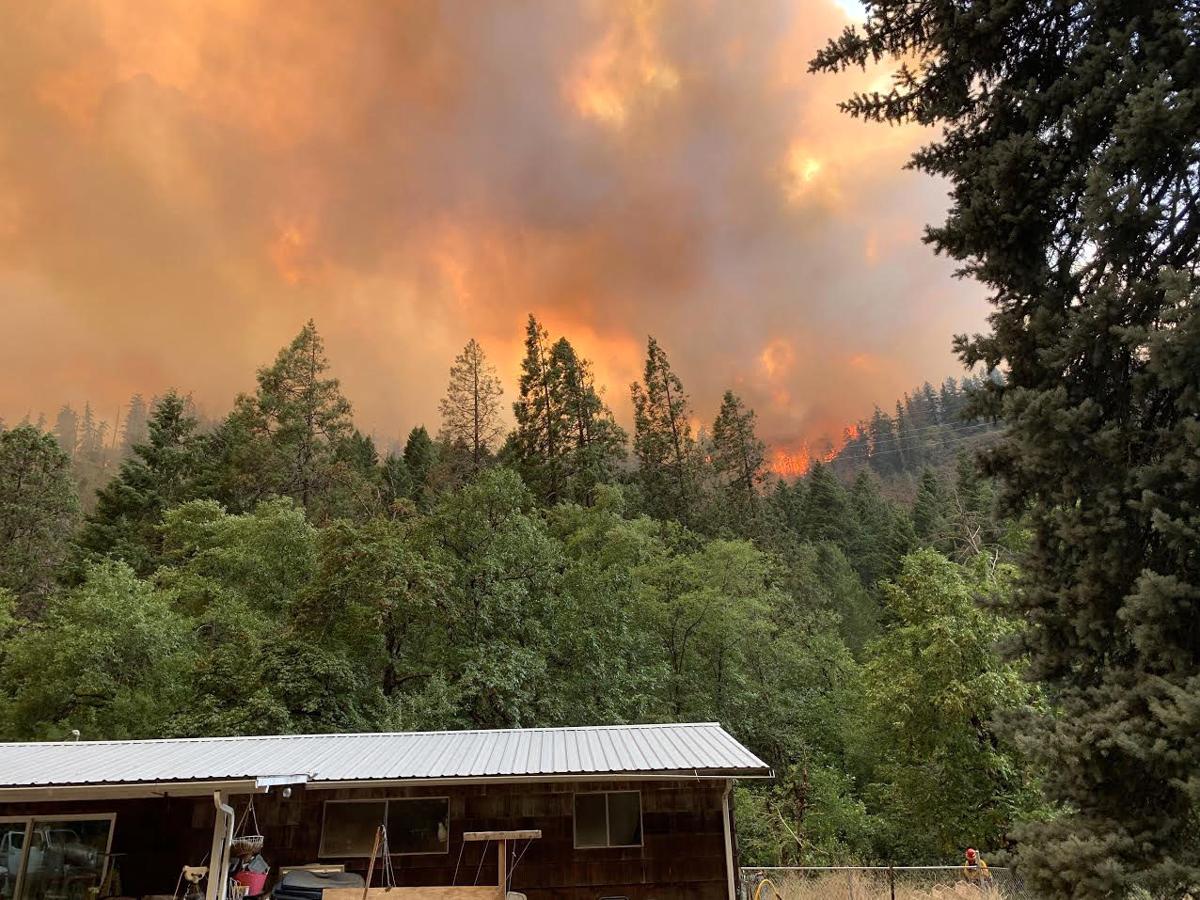 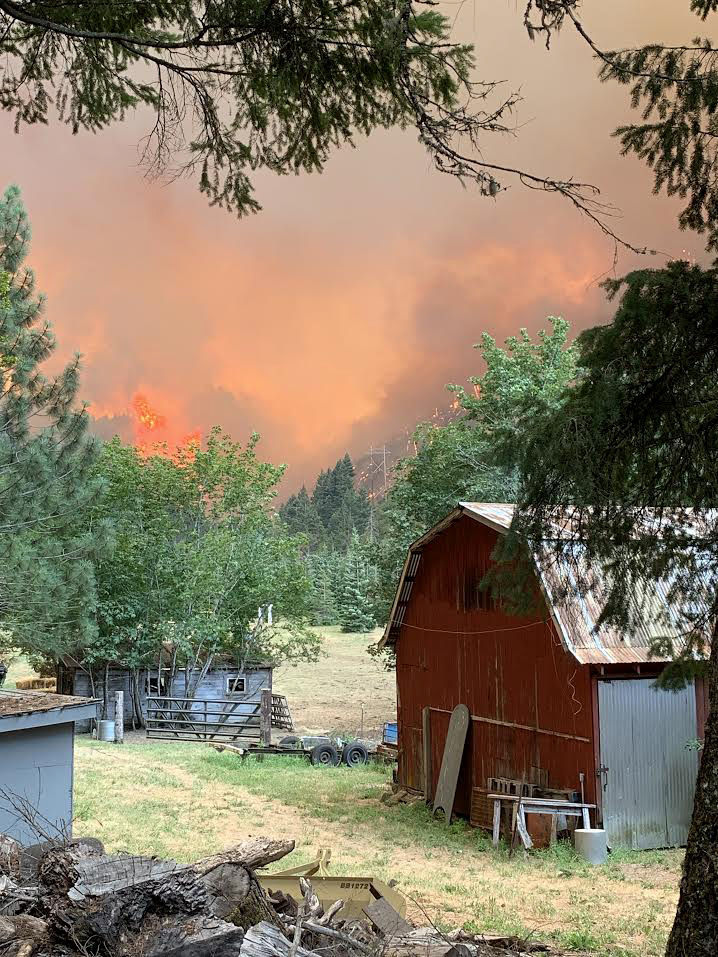 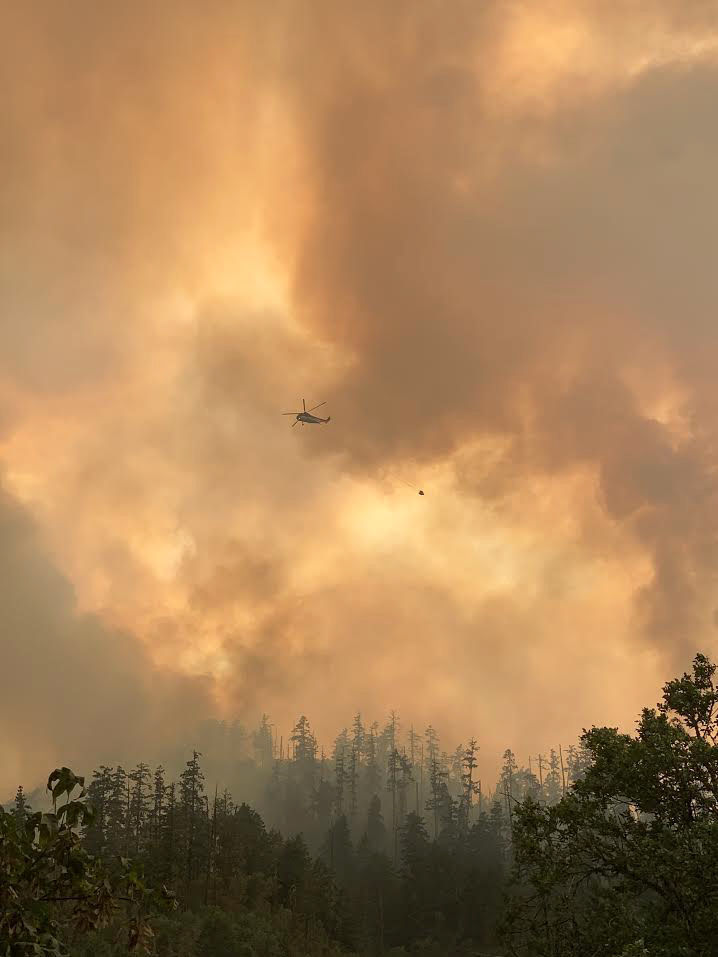 A helicopter is seen from Jayonna Hunnell’s home flying above the Milepost 97 Fire in Canyonville. 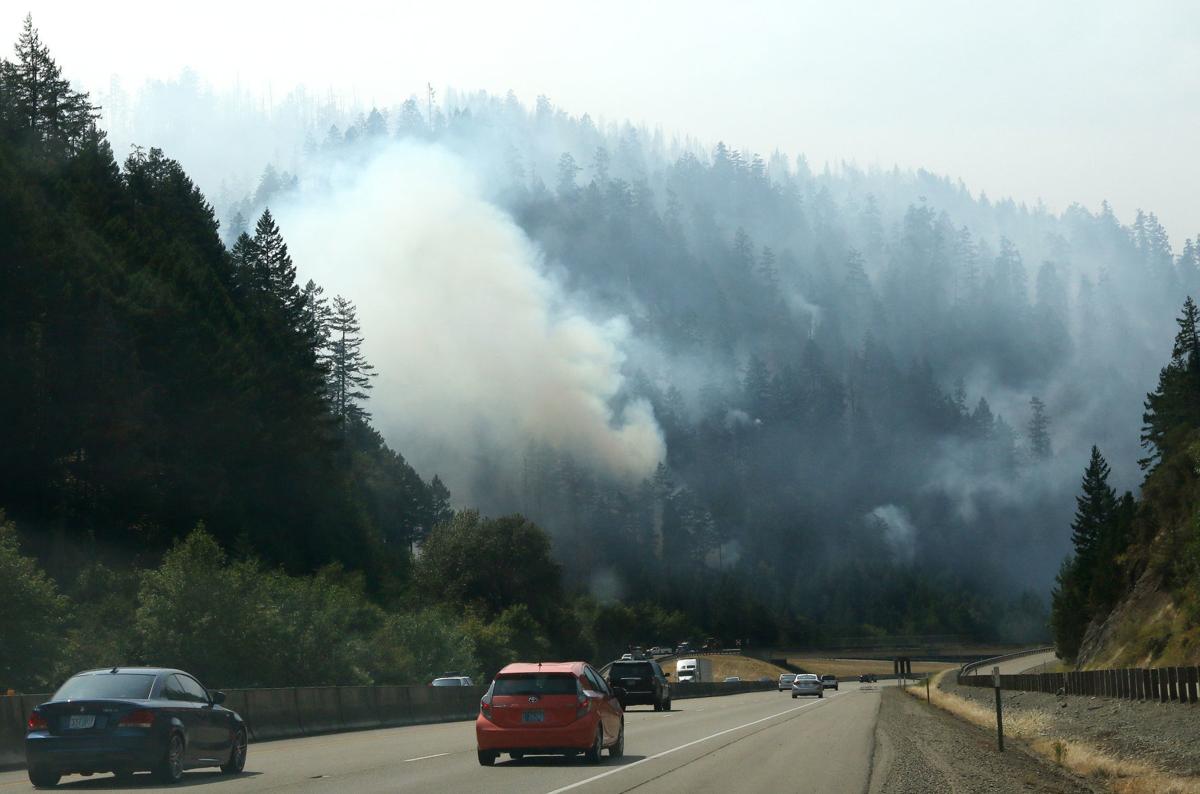 Motorists on Interstate 5 pass near hillside fires on Friday south of Canyonville. 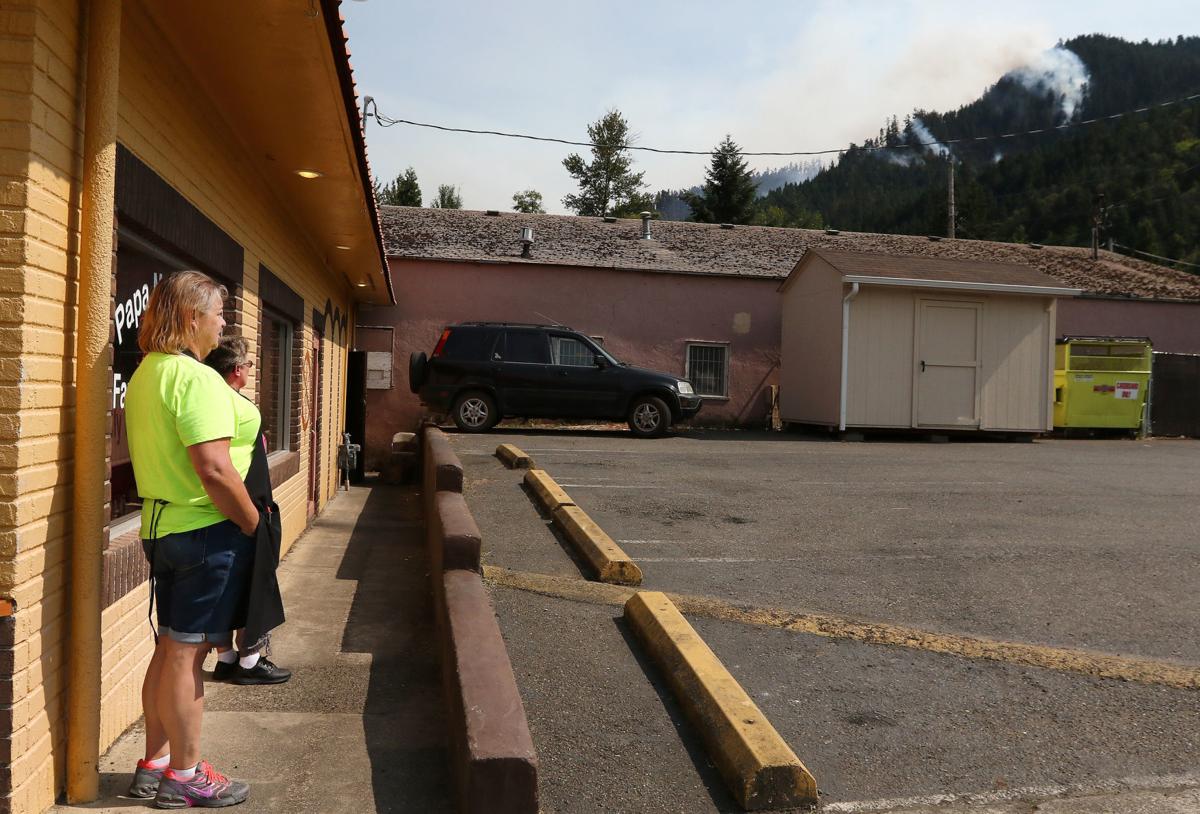 Papa Morgan’s Family Restaurant waitress Michelle Comer, front, and cook Janet Bergman watch smoke plumes in the hills near Canyonville while on a work break at the Canyonville restaurant on Friday. 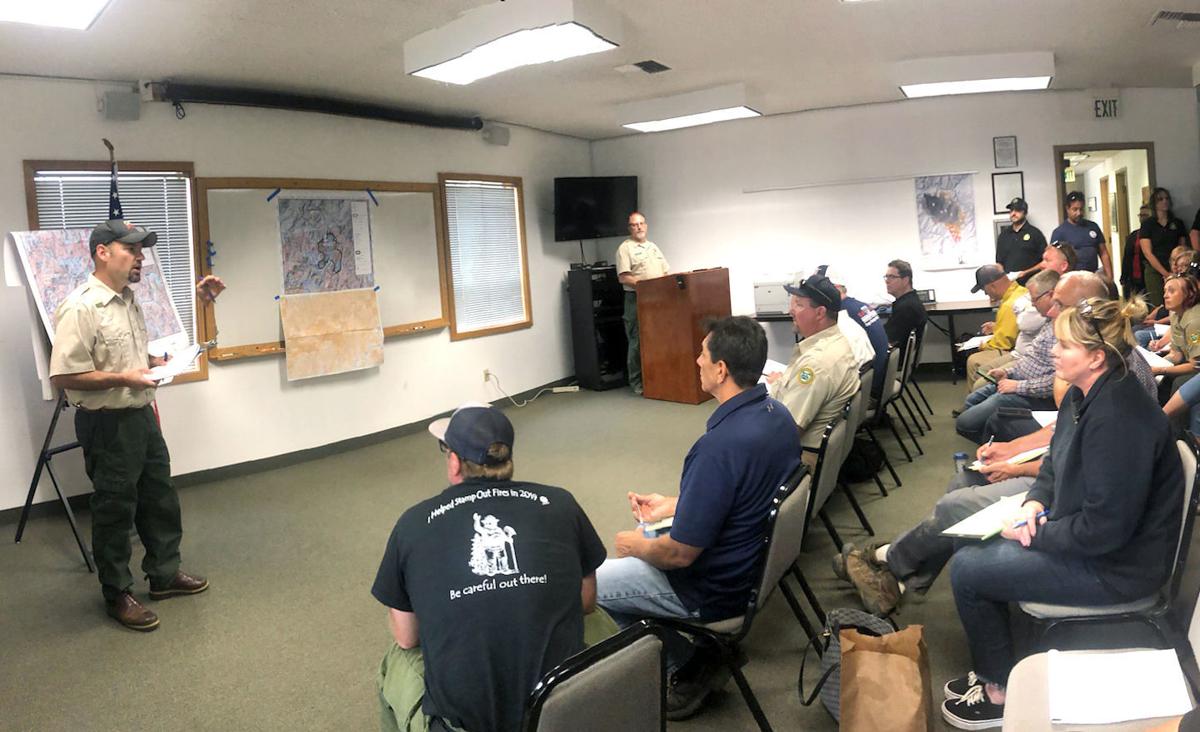 Crews are briefed on the current status of the Milepost 97 Fire on Friday.

Jayonna Hunnell’s home shortly before the Milepost 97 Fire forced her and her family to evacuate Thursday.

A helicopter is seen from Jayonna Hunnell’s home flying above the Milepost 97 Fire in Canyonville.

Motorists on Interstate 5 pass near hillside fires on Friday south of Canyonville.

Papa Morgan’s Family Restaurant waitress Michelle Comer, front, and cook Janet Bergman watch smoke plumes in the hills near Canyonville while on a work break at the Canyonville restaurant on Friday.

Crews are briefed on the current status of the Milepost 97 Fire on Friday.

After a final look through her house before evacuating Thursday night, Jayonna Hunnell paused briefly to make sure she packed all her irreplaceable possessions.

She heard the sound of Douglas Fir trees crackling as the Milepost 97 Fire headed toward her property.

“That sound just piercing up your spine,” Hunnell said. “Then the cops coming in saying, ‘You guys, you gotta go.’ As soon as I walked outside, I could just see the high flames in our backyard, right there.”

The fire began about one mile southeast of Canyonville Wednesday night, and by the time Hunnell evacuated the next day, it had grown to 750 acres. By Friday afternoon, the fire surged to 6,000 acres, burning through private industrial timberlands, Oregon and California Railroad Revested Lands and lands held by the Bureau of Indian Affairs for the Cow Creek Band of the Umpqua Tribe of Indians.

It’s the largest wildfire in Douglas County so far this season.

Fire suppression efforts were hindered by steep, rocky terrain, minimal road access, high temperatures and low humidity. Trees damaged by a fire in the 1980s made firefighting dangerous as trees were prone to falling, said Kyle Reed, a spokesman for the Douglas Forest Protective Association.

On Friday, seven helicopters, two large air tankers and two single-engine air tankers supported more than 200 firefighters on the ground. Additional aviation resources and ground resources in the form of hand crews, engines, and heavy equipment have been ordered and are en route to the incident, Reed said.

On Friday, as far as Hunnell knew, the flames had not consumed her house, the other two houses on the property belonging to her brother-in-law and parents-in-law, nor her neighbor’s house. Hunnell’s family and their neighbor were the only ones forced to evacuate.

Later Friday night, Level 1 evacuation notices were issued for neighborhoods on the west side of Interstate 5 between milepost 83 and milepost 88.

Crews covered the houses with heat-repelling structure wraps, Hunnell said, but firefighters told her they couldn’t guarantee the houses would be saved.

Two wildfires in previous years came within several miles of the property, she said. The fires prompted Hunnell’s family to take precautions, keeping essential documents, passports and other items in one place.

“Third time’s the charm,” Hunnell said. “When we saw this one right in our backyard, we were prepared.”

Hunnell said she was overwhelmed by the support of about a dozen friends that came to help move her cows and pack for the evacuation.

“It was just awesome,” Hunnell said. “We had a couple of couples that didn’t hear from us because we were trying to keep our phones clear for the emergency, so they just showed up and started helping.”

As she started driving away from the house on a one-way road, fire crews were starting to come in, and the anxiety of the situation set in, she said.

“I’m in my pickup by myself, full of stuff, and I’m bawling my eyes out going down that driveway and I remember seeing some of my friends’ faces, who were fighting the fire getting ready to go in there, and they’re smiling, giving me that look like, ‘It’ll be OK, we’ve got this,’” Hunnell said. “It just gave me more comfort.”

She said firefighters were jumping out of their engines, making fire lines and sawing down trees to protect the houses. “Those crews are unbelievable,” she said.

Hunnell’s family went to stay at her uncle-in-law’s house, which is also Canyonville. After a restless night, wondering if she would be forced to evacuate again, she tried to remain optimistic on Friday.

“A lot of it is just things,” Hunnell said about the possibility of property getting damaged. “What’s important is family and friends.”

But the fire still consumed something sentimentally important.

Hunnell and her husband were married on the property in June. Before the wedding, she and her friends built a permanent platform at the house that served as the dance floor, and her uncle-in-law handmade a bar.

“The back pasture where we got married, which is right up by the house, it’s just gone,” she said.

The Douglas County Sheriff’s Office couldn’t say when Hunnell and her family could return to the property.

But on Friday morning, the Hunnells still had a sense of humor.

“I kind of wish it had a cooler name than Milepost 97 Fire,” Hunnell said. “This morning we were trying to think of better names.”

I am sure "A" can think of some good names for the fire. I am glad your family are all safe!!