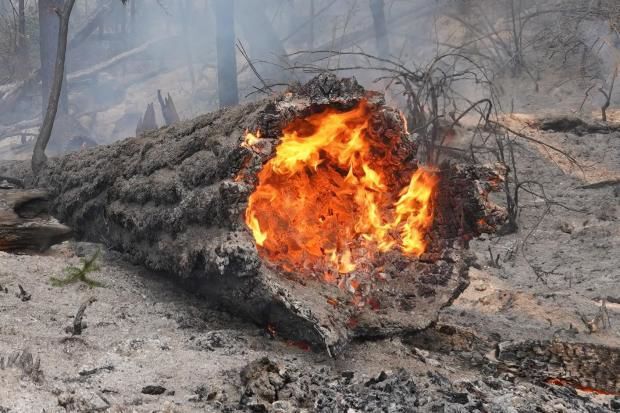 A downed tree burns from the inside on the Poole Creek Fire, part of the Skyline Ridge Complex of fires burning east of Canyonville. Crews are mopping up and patrolling many of the smaller lightning-caused fires on the complex, but the Poole Creek Fire remains a point of focus at 5,291 acres. 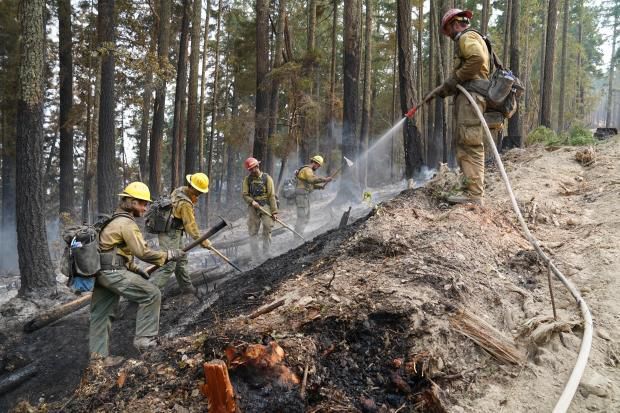 Hand and engine crews work to cool hot spots near a containment line on the Poole Creek Fire, the largest of fires on the Skyline Ridge Complex burning east of Canyonville.

A downed tree burns from the inside on the Poole Creek Fire, part of the Skyline Ridge Complex of fires burning east of Canyonville. Crews are mopping up and patrolling many of the smaller lightning-caused fires on the complex, but the Poole Creek Fire remains a point of focus at 5,291 acres.

Hand and engine crews work to cool hot spots near a containment line on the Poole Creek Fire, the largest of fires on the Skyline Ridge Complex burning east of Canyonville.

The Devil’s Knob Complex of wildfires burning on the Tiller Ranger District of the Umpqua National Forest saw significant growth Monday and Tuesday, jumping up to 15,694 acres as of Wednesday morning.

The complex had been mapped at 8,238 acres according to the Monday morning report from Northwest Interagency Management Team 8, the incident command team which had been assigned to the collection of 40-plus fires.

Firefighters have achieved 15% containment on the complex, with many of the smaller fires controlled and 735 firefighters and equipment operators focusing on problem areas on the larger fires.

Clear skies and warm temperatures Monday afternoon helped fuel the increased fire activity, especially on the Big Hamlin and Smith fires within the complex. The Big Hamlin Fire jumped indirect containment lines along the fire’s southern and southeastern flanks, while the west flank of the fire held strong and remains in mop-up operations.

The Big Hamlin Fire had grown to an estimated 9,383 acres as of Wednesday morning.

That same increase in activity allowed embers from the Smith Fire to jump the South Umpqua River and ignite a spot fire, which as of Wednesday morning had grown to an estimated 100 acres. The total acreage of the Smith Fire now stands at 2,805 acres.

Cooler overnight temperatures and higher relative humidities calmed that fire behavior overnight into Wednesday, but officials with Team 8 are concerned about the forecast for Wednesday, which includes temperatures climbing back into the mid-80s and very low humidities.

Other fires of concern in the complex saw little to no activity Monday and remain in the mop-up and patrol phase. The Mule Creek Fire held steady at 1,024 acres, Wild Cat held at 215 acres, Little Applegate remained at 135 acres, Section 30 (Railroad) was at 76 acres and Dismal Creek grew mildly to 44 acres.

East of Canyonville, the Skyline Ridge Complex was reported at 5,760 acres Tuesday. Despite the same fire activity experienced on the Devil’s Knob Complex, the Poole Creek Fire and other small fires stayed within their containment lines, according to a report Tuesday evening. Easily the largest of the lightning-caused fires, the Poole Creek Fire had grown to 5,291 acres.

There are 902 people assigned to the Skyline Ridge Complex, which despite the troublesome Poole Creek blaze, is at 81% containment as of Tuesday evening.

Roughly 20 miles east of Glide, the Jack Fire burning between Steamboat and Dry Creek has calmed significantly, growing just one acre Tuesday to 23,691 acres with 51% containment as of Wednesday morning.

Ten miles north of the Jack Fire, the Rough Patch Complex burning on both the Willamette and Umpqua national forests has grown to 14,587 acres but remains at only 3% containment. A total of 621 firefighters are currently assigned to the two incidents, which are being managed by Great Basin Team 2.

The Rough Patch Complex consists of a total of 37 fires which are believed to be caused by an active thunderstorm that passed over the area July 30. The cause of the Jack Fire remains under investigation.