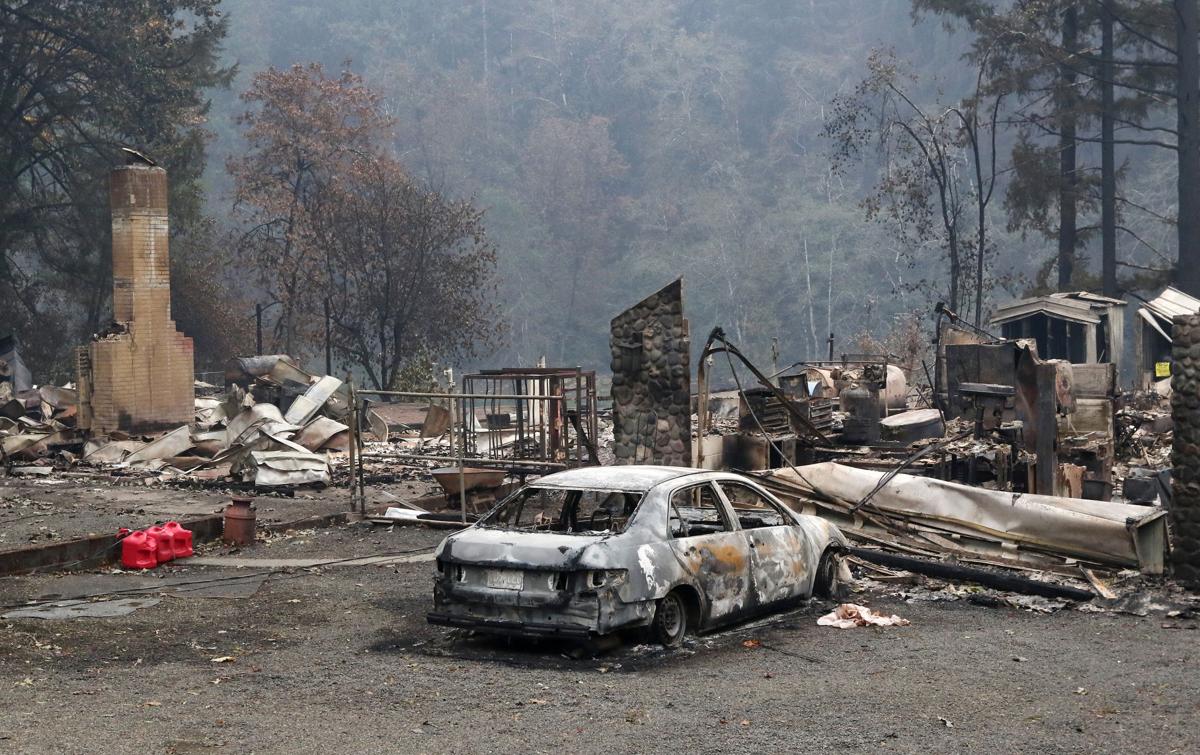 The remains of a structure and car destroyed by the Archie Creek Fire east of Idleyld Park in mid-September 2020. 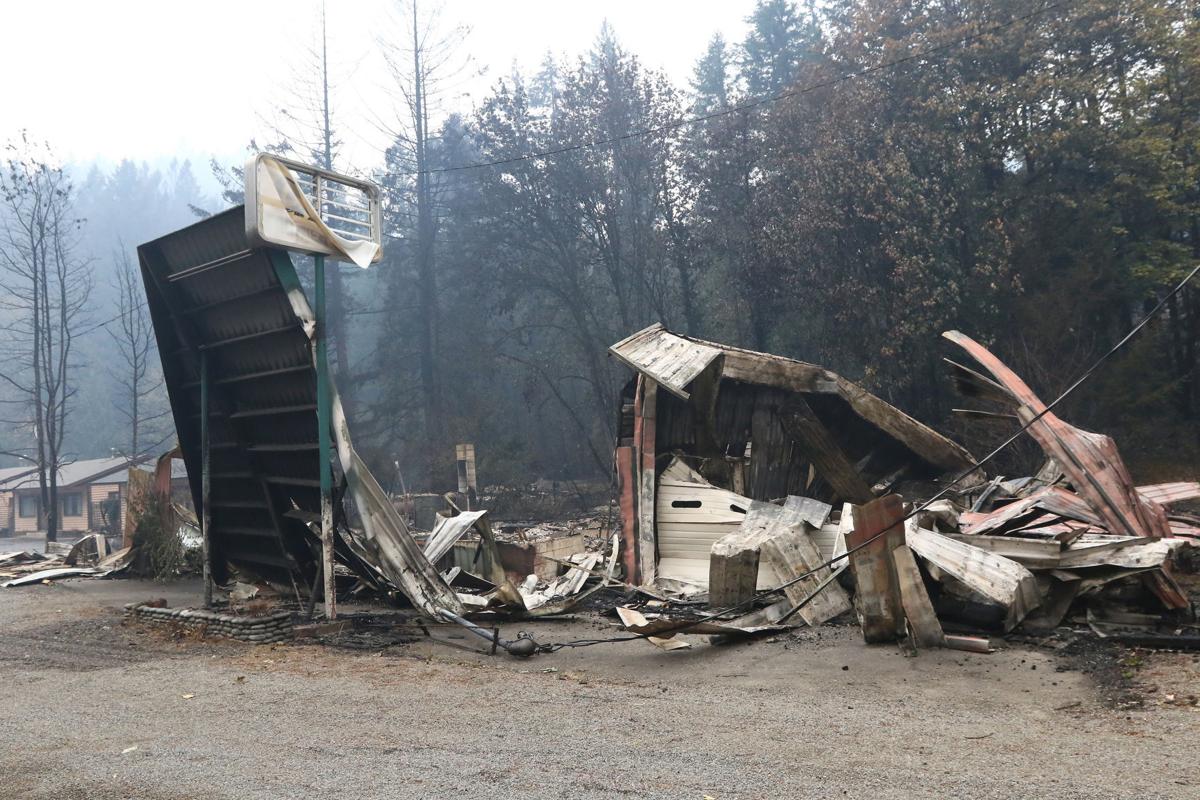 The remains of the former Frontier Store destroyed by the Archie Creek Fire next to the Dogwood Motel east of Idleyld Park in mid-September 2020. 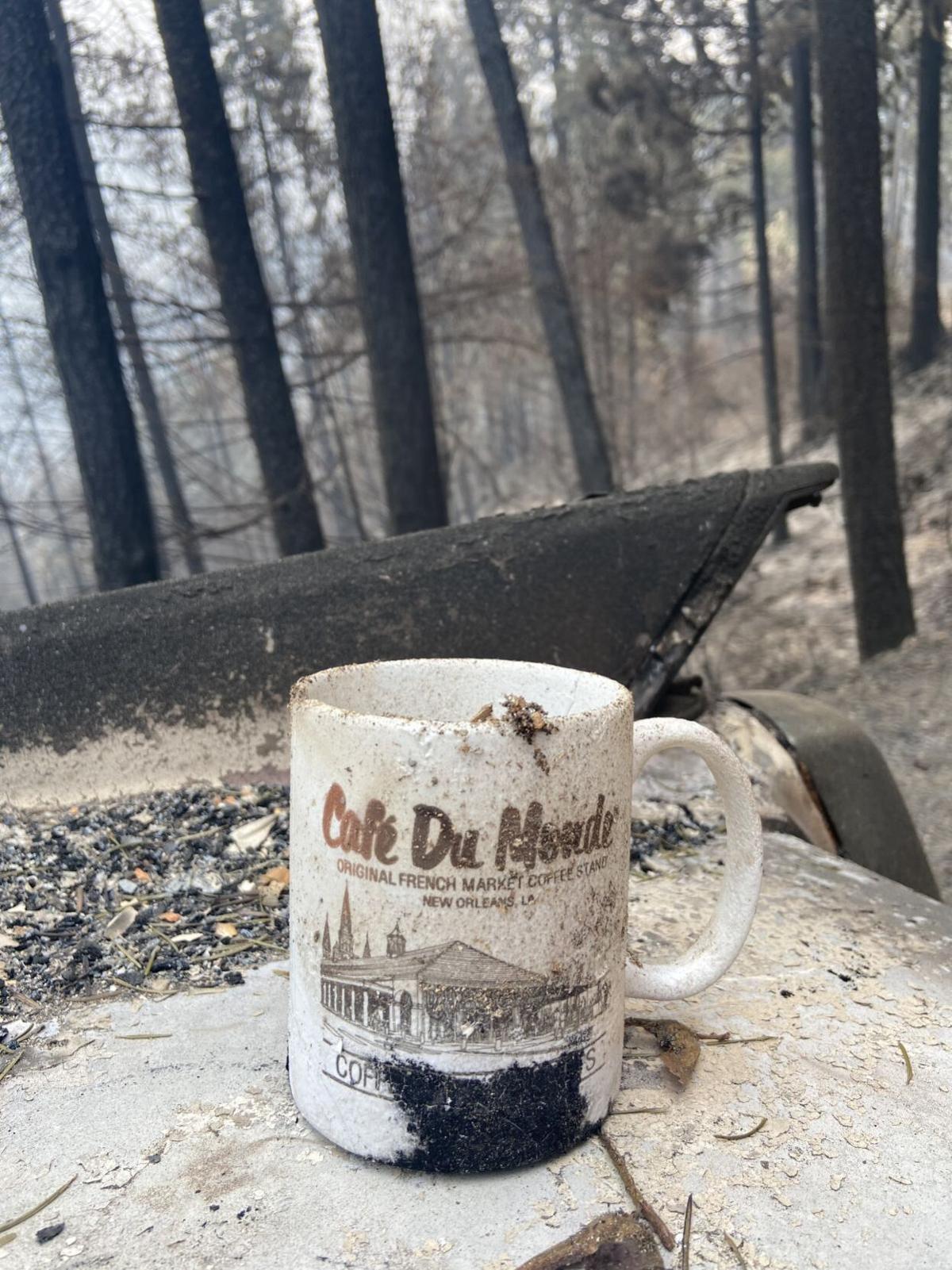 A porcelain coffee mug from the popular Cafe du Monde in New Orleans was one of the last remaining items at the home of Aaron and Trinity Barney, whose home was one of 109 burned during the Archie Creek Fire in September 2020.

The remains of a structure and car destroyed by the Archie Creek Fire east of Idleyld Park in mid-September 2020.

The remains of the former Frontier Store destroyed by the Archie Creek Fire next to the Dogwood Motel east of Idleyld Park in mid-September 2020.

A porcelain coffee mug from the popular Cafe du Monde in New Orleans was one of the last remaining items at the home of Aaron and Trinity Barney, whose home was one of 109 burned during the Archie Creek Fire in September 2020.

September 6, 2020: It’s a beautiful Sunday afternoon. Myself, my fiancee, Suzy, and our newly adopted mutt “Moose” venture from our Green District home to enjoy a day at Millpond Park, roughly 4 miles up Rock Creek Road east of Glide.

The crawdad fishing wasn’t great, but the walk along the creek was pleasant, nearly 15 degrees cooler than the temperatures that were choking the Umpqua Basin that weekend, and Moose enjoyed himself with a couple of swims in the more temperate waters of the creek. Meanwhile, we were enjoying the shade of the thick Douglas firs which surrounded the park.

In less than 48 hours, that landscape would change dramatically.

I started writing for The News-Review in 1990 as a senior in high school when then-sports editor Craig Reed hired me to work part-time. I joined a staff that included Kip Carlson and Tom Eggers, two writers who I had admired growing up.

In October of 2019, when we decided to make the move back to Roseburg from Florence, I called Tom to ask if he needed some help on the sports desk. Turns out, he did. I had an audition of sorts covering an Oakland football game on a Friday night at Eddy Field, and I started on the sports desk in November of that year. When the coronavirus pandemic broke in March 2020, and all of the sports began shutting down, I was placed on furlough.

Then, Dan Bain retired in early September 2020, and our managing editor Ian Campbell and news editor Mike Henneke agreed to bring me back to fill Dan’s shoes.

Sept. 8, 5 a.m.: first day back at the paper, although I’m in my recliner. Cup of coffee in one hand, phone in the other. “Glide is on fire!” the social media posts read.

There was a grass fire running quickly east to west on the northern bank of the North Umpqua River from Glide proper. I texted my editors asking, “Who’s going to Glide?”

I slapped myself together and hauled you-know-what out to Glide to see a helicopter carrying a bucket moving even faster up the North Umpqua River. The Glide Rural Fire Protection District was “all hands on deck,” with firefighters racing east on Highway 138 to assist with evacuations.

The initial fire was known as the French Creek Fire, which burned a total of 492 acres of pasture land. While larger than previous burns, anyone age 30 or older would remember the days when sheep and cattle ranchers would burn their fields in late August or early September.

Low-hanging smoke was nothing new. Twenty miles to the east, an entirely different animal was beginning to growl.

Three small fires had been reported east of Glide. Pushed by east winds gusting into the 40-mph range and beyond, those three fires ultimately combined, causing the most devastating fire on record in Douglas County.

A plume rose out of the heart of those three fires — which would become known as the Archie Creek Fire — with the ferocity of a phoenix rising from the ashes. As the fire began to accelerate — pushed by an easterly wind blowing now 50-60 mph according to the National Weather Service — the entire valley was cloaked in darkness, and within 24 hours, the fire had grown in excess of 96,000 acres.

Ash fell from the sky like snowflakes on a perfect Christmas morning. Twenty miles to the east was pure Hell.

After the initial trip to Glide, I returned to Roseburg. I stopped at the Diamond Lake Boulevard Chevron to top-up my 64-ounce jug of iced tea.

It wasn’t the usual stop at that store. There was a palpable sense of fear.

Due to COVID-19 protocols, everyone was masked, but anyone with a sense of recognition can see trepidation, especially under those circumstances.

A young woman was distressed at the checkout counter. “We had three minutes!” she exclaimed to the cashier. I approached the young woman, told her who I was, and it turned out we knew each other from years ago.

While she declined an official interview, she expressed her fear for her pets, which she was told should be her last priority based on the fire’s spread.

Mere hours after the interaction with this woman, Archie blew up with a smoke plume similar to a volcanic eruption, casting Roseburg into a mid-afternoon darkness and causing street lights to turn on at 3 p.m.

Archie was personal for me. The area it burned was my childhood playground, whether hunting the meadows and clear cuts of Rock Creek, riding dirt bikes with my buddy above Swiftwater Park and Lone Rock, or the occasional beerfest at an undisclosed location near Honey Creek. When Highway 138 East was opened to residents, the Douglas County Sheriff’s Office and Douglas Forest Protective Association provided local media a tour of the aftermath.

I remember feeling disheartened when we arrived at the Dogwood Motel, a neighbor to what used to be the Frontier Store, where my father Bill, buddy Todd and I would stop for snacks either on our way to go fishing at Toketee Reservoir or on our way home.

Next to the Frontier Store was an automotive shop operated by the late John Head, with whom my father would trade work as fellow mechanics.

That steel garage had been virtually melted.

Norman Call’s Dogwood Motel sustained damage to one of its buildings, while the three homes on the opposite side of Highway 138 were leveled to nothing more than a foundation and a chimney stack.

But during that tour, I also saw homes that survived.

We reached Susan Creek and turned back, with the plan to travel up Rock Creek Road next.

When we turned onto Rock Creek Road, Douglas County Sheriff’s Office Sgt. Brad O’Dell was behind me in the caravan. We were stopped while crews worked to remove hazardous logs. I sat there for about 30 seconds and got out of my car.

It took almost five months to get up the gumption to travel up Rock Creek, as I was assigned to write a piece about a wood sculpture from a California botanist who had found a burned tree root and decided to carve it into an octopus, to represent regrowth as a gift to the Glide community.

“When an octopus loses a tentacle, it eventually grows back,” the artist, known only as Chango, said. “This place lost a tentacle, and it will grow back.”

The landscape was so entirely different. I had no point of reference. No remembrance of where childhood friends Travis Pindell or Danny Kresky lived, even though they were Glide’s version of next door neighbors.

I have often felt that if the North Umpqua River had a Chamber of Commerce, I would have sat on the board. It’s the most beautiful 50 miles I have seen and I have lived in every corner of Oregon. When I was the sports editor of the Ontario Argus Observer in 2000, the Ontario girls soccer team traveled to Glide for a state playoff game. I remember telling a couple of the girls, “Get yourself a 5-hour nap, but make sure you’re awake for those last two hours.”

They returned with rave, and genuine, reviews. And a full roll of pictures.

Instead of lush Douglas fir hugging the highway, I have seen parts of that river that I’ve never seen before, and I’ll be 49 in November. It will never look the same in my lifetime, which has been a consistent lament of those who have made their lives here.

Beauty is in the eye of the beholder. And one year later, a different kind of beauty is being born.