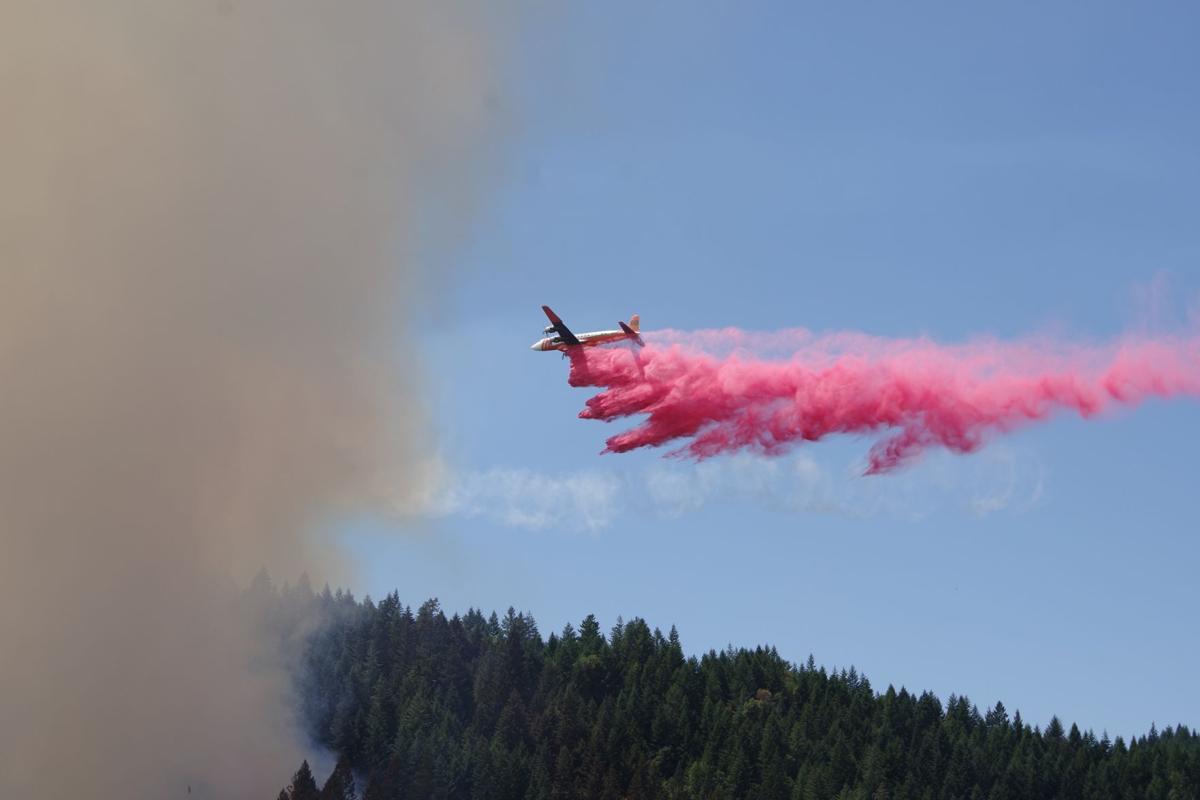 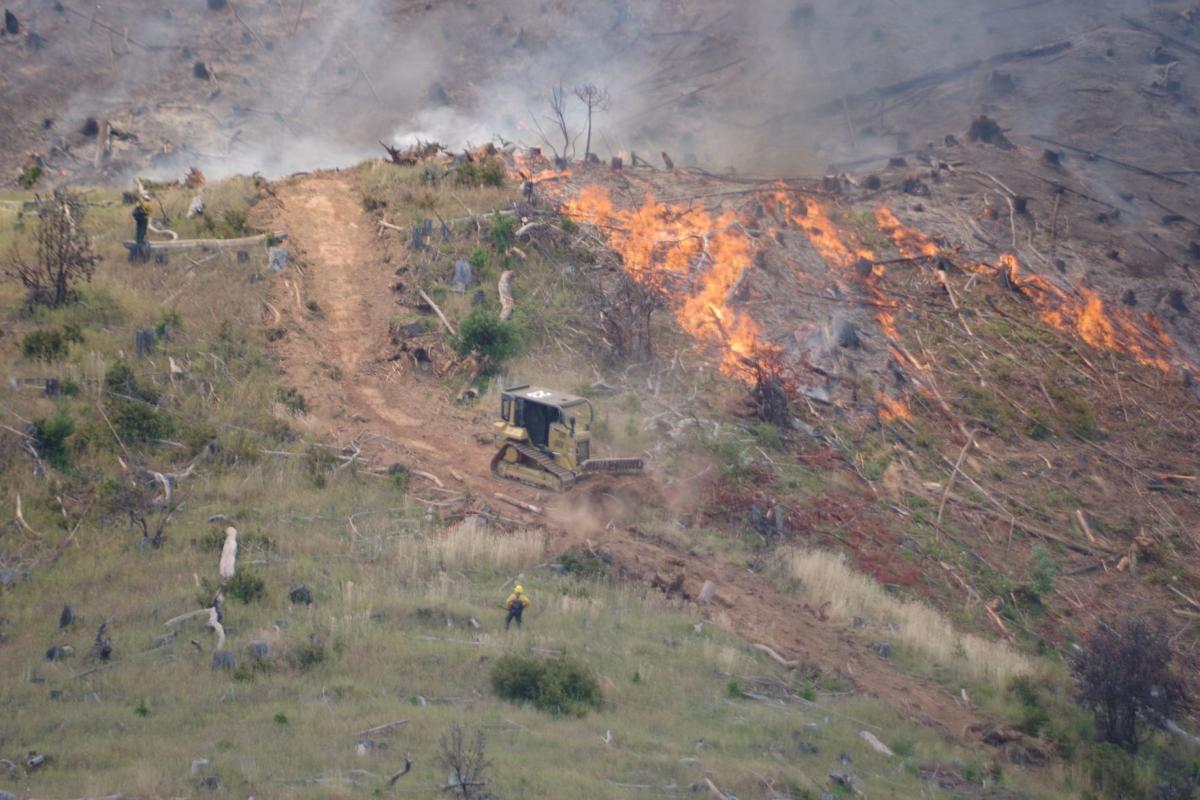 Fire crews stand on a ridge northeast of Canyonville on Monday afternoon. Crews were fighting a fire that had grown to 35 acres as of Tuesday morning. 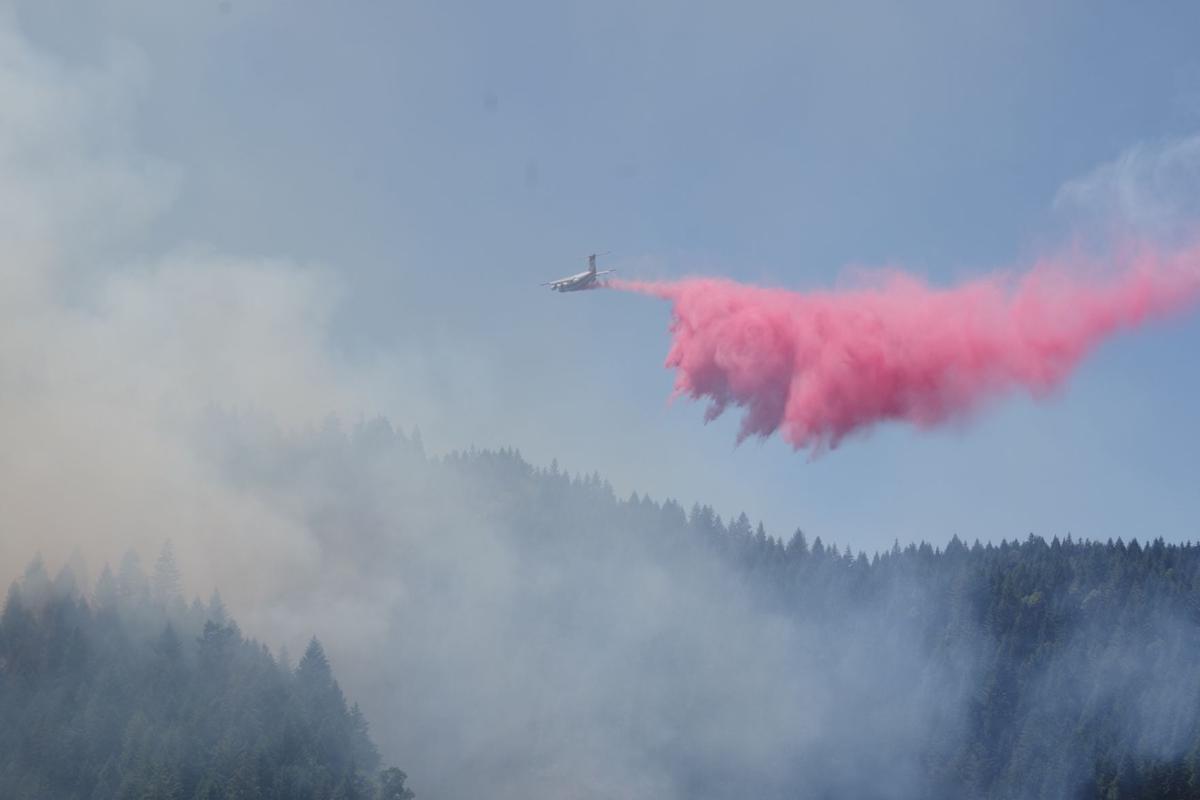 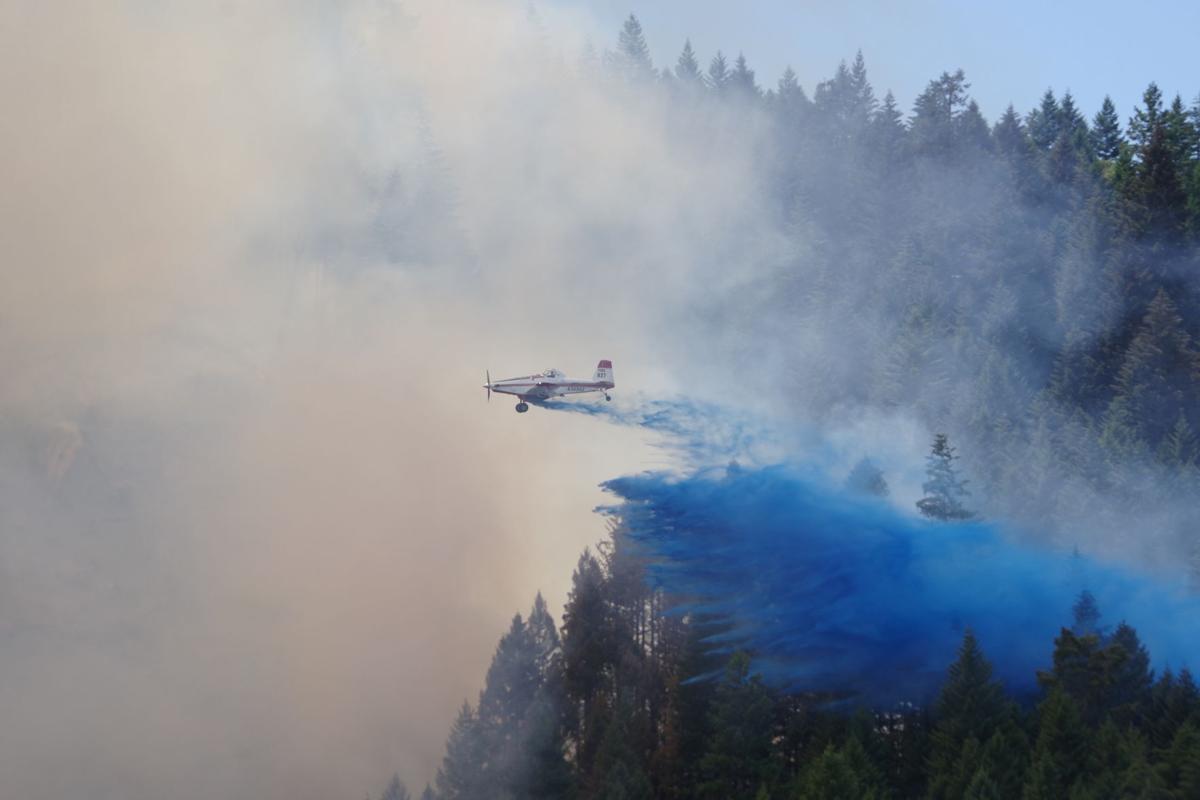 A single-engine air tanker makes a pass over a wildfire located northeast of Canyonville on Monday.

Fire crews stand on a ridge northeast of Canyonville on Monday afternoon. Crews were fighting a fire that had grown to 35 acres as of Tuesday morning.

A single-engine air tanker makes a pass over a wildfire located northeast of Canyonville on Monday.

Emergency crews had nearly completed a fire line around the Days Creek Road Fire on Monday night, with fire activity substantially dropping from earlier in the day.

Kyle Reed, the public information officer for the Douglas Forest Protective Association, said the day shift incident commander reported that the construction of a fire line and the installation of hose lays had been completed around 80% for the fire and that crews planned to expand that throughout the night.

Crews were able to complete fire line and install hose lays around the entire perimeter of the power by Tuesday morning.

Reed said Tuesday’s priority would be to construct a direct containment line against the edge of the fire.

“There is about 800 feet of indirect fire line on the northern side of the fire, meaning that there is still unburned fuel between the fire’s edge and the control line,” Reed said.

On Tuesday, 115 people were assigned to the fire to hold and improve fire lines and mop up hot spots. Two helicopters will be used as needed throughout the day.

The blaze, located 14 miles northeast of Canyonville, had grown to around 35 acres by the middle of the afternoon Monday but hadn’t grown anymore by the time overnight crews took over.

Just before 9 a.m. Tuesday the fire was still estimated at 35 acres, but more accurate mapping will be completed, as time allows, in the coming days.

Reed said that although the fire had grown to 35 acres by 4 p.m. from 20 acres early Monday afternoon, extensive resources ensured the agency’s first response was strong and swift and preemptively dampened any chances the fire had of spreading quickly.

“We hit this thing really hard right from the start,” Reed said.

Reed said approximately 85 firefighters had been assigned to fight the fire Monday, with the primary overnight focus centering on improving existing fire lines.

Their efforts were aided since four Type 2 helicopters owned by the county, along with a larger Type 1 helicopter, were at the disposal of the agency. The helicopters were drawing water from nearby ponds.

Also working on the fire were two large air tankers and a pair of single-engine air tankers.

Reed said numerous ground resources, including engines, hand crews and equipment were helping with the fire, with most working to construct fire trails around the blaze. Personnel from the Umpqua National Forest, along with the Oregon Department of Forestry, the Coos Forest Protective Association, and the Bureau of Land Management along with industrial landowners and operators, helped with suppression efforts.

The fire was initially reported at around 11 a.m. Monday. The cause of the fire remains under investigation.

Jon Mitchell is a page designer, photographer and writer for The News-Review. He can be reached at 541-957-4214, or at jmitchell@nrtoday.com.

Redeemer's pastor and his wife walk off into the sunset

Roseburg kindergartners return to the classroom

Redeemer's pastor and his wife walk off into the sunset

Roseburg kindergartners return to the classroom

Thank you to all Emergency crews that has responded, keep up the good work.