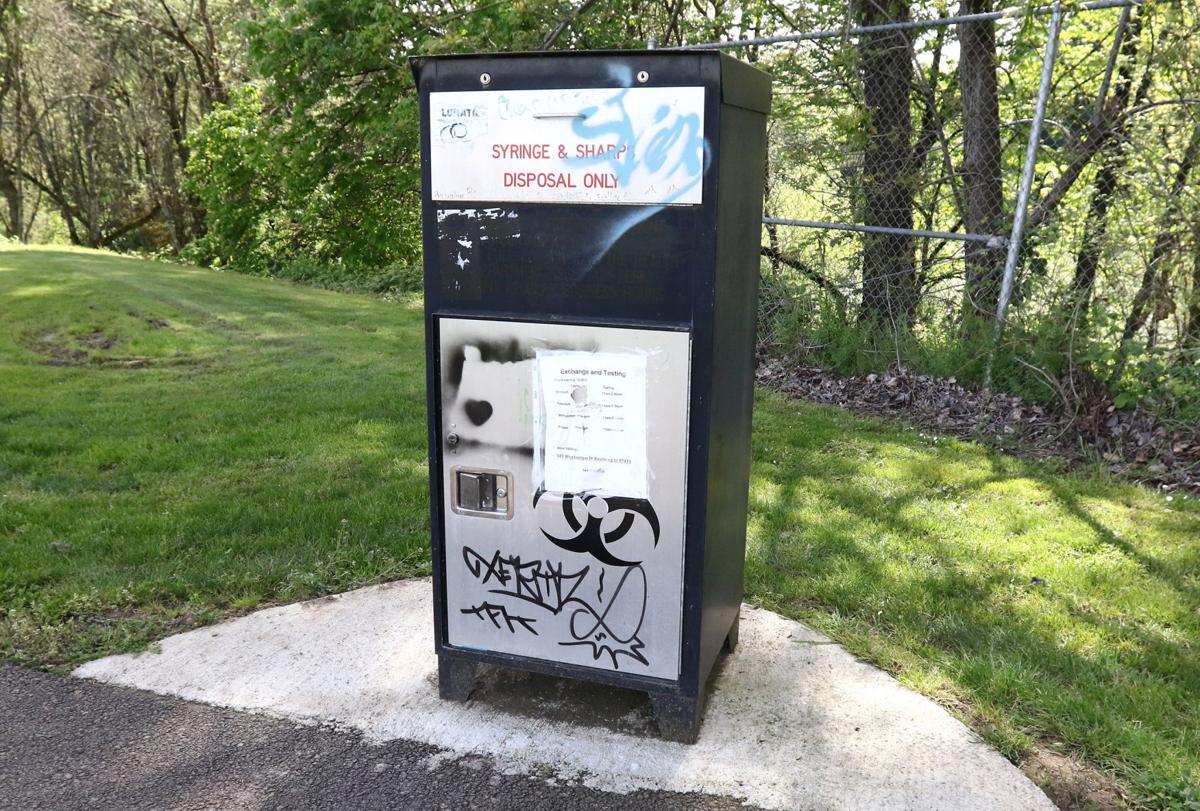 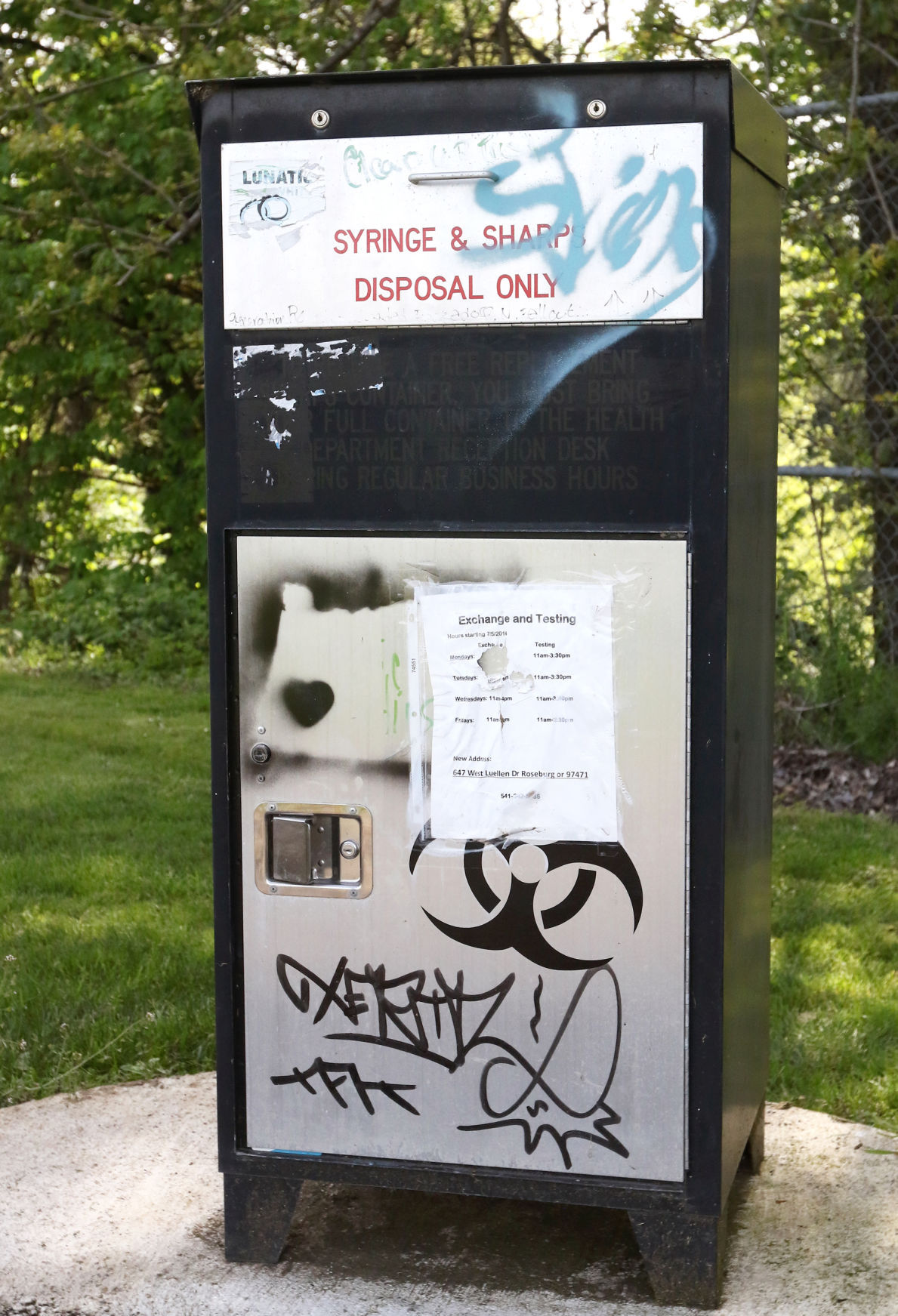 Roseburg City Councilor Ashley Hicks says she is concerned about a biohazard box at Micelli Park, fearing that children could somehow come into contact with the sharp needles within it.

A biohazard box is a metal container where people can dispose of used syringes and other hazardous waste. They are largely intended to be an option to keep people from littering parks and streets with drug paraphernalia. There is one located in Roseburg at the south end of the multi-use trail at Micelli Park.

Hicks called The News-Review on April 24 to voice her concern about the box’s location in a public park, saying that she considered it a high priority. She brought it up again at the council meeting that night. It was the second time she addressed the issue with the council.

Although the metal box is locked, Hicks said she was concerned that children could break into it.

“Is the city going to find themselves responsible for that?” she asked the council. “I want to see if other council members want to have a discussion about the lack of policy.”

The council voted to have the Parks and Recreation Commission discuss the biohazard box.

In an email to The News-Review, Colley said the parks commission will discuss the box in the near future.

On Thursday, the county health administrator, Bob Dannenhoffer, said the box is serviced by HIV Alliance, a Eugene-based nonprofit.

Two residents broached the subject at the Roseburg Parks and Recreation Commission meeting on April 19. They did not want the box removed and said they would like the city to provide other options for sharps disposal.

At the council meeting, Hicks accused Colley of working “in private” with those residents to install more boxes in public parks. Colley said he has not been working privately with anyone to install biohazard boxes.

“They didn’t want to leave it there at the Madrone site because they didn’t think it would be used,” Yandel said. “We worked with them to identify a spot where it would be useful, and we identified Micelli Park.”

That location gets a lot of foot traffic, she said, so it is accessible “to the people who need it.” There are two other boxes at the nonprofit’s Roseburg office on West Luellen Drive.

A child has never broken into one of its biohazard boxes in any of its locations across the state, Yandel said.

“We’re all concerned about children coming into contact with sharps,” she said. “The box is a good way to prevent that from happening. The alternative is people throwing them into trash cans or bushes, where children stick their hands.

I’d rather have them in a secure metal box than a trash can.”

The Roseburg Parks and Recreation Committee will discuss biohazard boxes at one of its next meetings. It holds its regular meetings at 8:15 a.m. on the first Wednesday of the month. Its meeting in May has been canceled.

The Roseburg Parks and Recreation Committee will discuss biohazard boxes at one of its next meetings. It holds its regular meetings at 8:15 a.m. on the first Wednesday of the month. Its meeting in May has been cancelled.

Residents of southeastern Roseburg have filed a petition to recall City Councilor Ashley Hicks. In a statement, the group said Hicks has faile…

Turf, lights may be coming to Fir Grove fields

Do I have a problem with women? Just those that like to throw around phrases like I can't believe you said that to a women who is self-sufficient. If a women wants to be treated as an equal she should do as good of a job as anyone else regardless of their gender. If you sued someone for a fence that was on your property that is your business but what does their gender have to do with it? If you can't compete with men on a level playing field then you aren't equal. And by the way I am female I just don't pretend to be physically equal to a man. Just like men don't pretend they can have babies. There are certain things men can do better then women and some things women can do better. That is just how life is. For example, in the military women are given easier or dumbed down versions of exercises to do (like push ups) because they aren't as physically was strong as men typically.

i am sorry mogie. she seems to just be targeting another gurl. she cant fight logic with more logic, so she is pulling the gurl card of emotion. she'll be crying crocodile tears next. again, mogie, i am sorry.

This is just shockingg to hear that our city encourages drug use! I am with the counselor that these biohazard deposits are up in our face and being shoved down our throats. This community needs to not be a drug city and we should only have nice things at our parks to look at.

This is a joke right? Nobody really hides their head in the sand. You only want to look at nice things and not reality? No MsHernandez has got to be kidding. That sounds like a little kids saying if I can't see it then it doesn't exist.

So just because it exists, we have to see it in a place meant for children? You must support showing pornography in our schools too. Pornography is a reality, so why shield our children from it, right? Or is that just in the case of illegal drug needles? Our children don't deserve exposure to either!

I am not advocating pornography for anyone. But what is offensive to you might not be offensive to me. I don't advocate pornography or drugs on the streets but if you want to do that in your home or another private home that is your business. Just like urinating outside is illegal. Who wants some guy flashing his junk in public. Pornography and drugs could be offensive to people not just children. Having a place to dispose of needles is a good thing unless you prefer to have them littered on the ground where anyone can get stuck with them. I still want to know why MsHernandez is gender biased. If a comment if good enough for a man then that same comment is good enough for a women. Unless she is implying that women are weaker and more fragile then men. I thought women wanted to be treated equal?

let us see it on the ground, in the bushes, under the benches, in the playground equipment. just the ticket for kids

I am NOT bias at all Mogie. Are you perhaps? I spent several years of my life on a ship as a captain with the responsibility of command over a crew, Women are not weak but chivalry still matters!! What decent man would disagree with that? There must be something under the surface. If you have a problem with women, you should just be open about it instead of asking me these questions, it is very unfair of you. Also I successfully sued a (male) neighbor because of a dispute over our property lines and his INVASIVE FENCE

why does chivalry matter??

the city is encouraging proper disposal of drug paraphernalia. drug use is rampant in douglas county. just read the arrest sections. my wife, infant daughter and i once spent the nite in a motel i checked under the bed the next for stuff left by my daughter as she was crawling around on the floor. i found two hypodermic syringes under the bed. you want your kids to find that stuff in the parks?

I understand your feelings on this just me. You are right to want to protect your wife and daughter. Drug use is here and pretending it doesn't exist won't make it go away. Sometimes we have to deal with unpleasant things...said but true.

This article rises several questions, such as: 1) who are the people who use the three boxes in Roseburg?, 2) how many sharps and syringes have been deposited in them since they were installed? (does anyone keep track of their use?), 3) people who need to use syringes etc. for conditions like diabetes must have better ways of disposing of them than in trees and bushes. What do they do?, 4) can someone also put out-of-date prescription meds in these boxes?, 5) what happens to the biohazard waste after collection? (I assume it might be incinerated?), 6) why does the box shown have "tagging" on it? Is there any gang-related connection with these boxes? We could use some follow-up reporting on this story.

Idiocy at it's finest. The box is locked metal, something children generally can't break into. It's a perfectly fine example of community clean up and supports a positive message of not spreading your trash around. It's good for the community, good for our children and frankly good for those who use such paraphanelia to encorage them to dispose of it properly.

I suspect her objection is more "OMG DRUGS" than anything of value or worth to the conversation.

All it takes is one vocal person to ruin something. Example: The Salvation Army offers a senior discount on purchases but because one person threw a fit and got upset because she "looked" like she would qualify The Salvation Army canlonger ask if you are interested in that discount. If you wait until the end of the transaction to ask it's too late and you are out of luck. So a big thank you to the person that screwed this up for the rest of us.

This is a good example of not being able to please everyone. No matter how good your intentions are always seems to be someone who is pissed by that.

just me had a good question is she a council member?