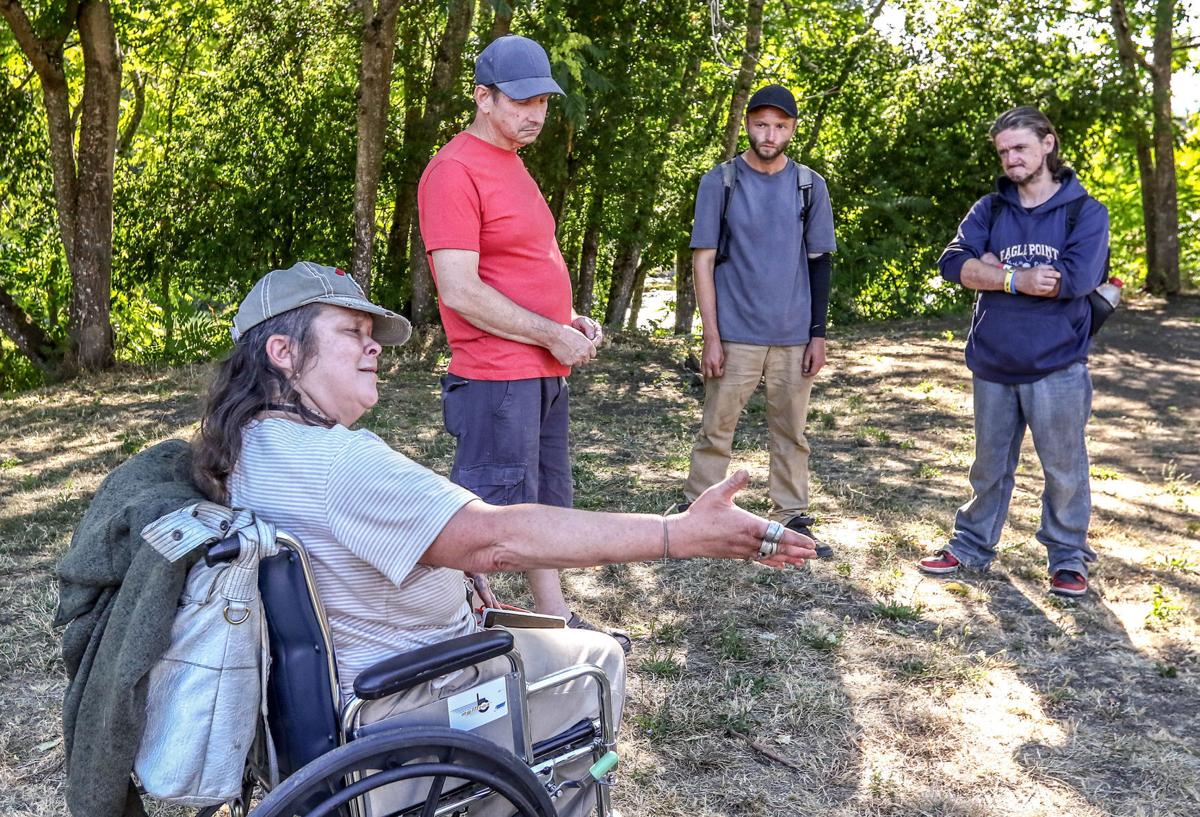 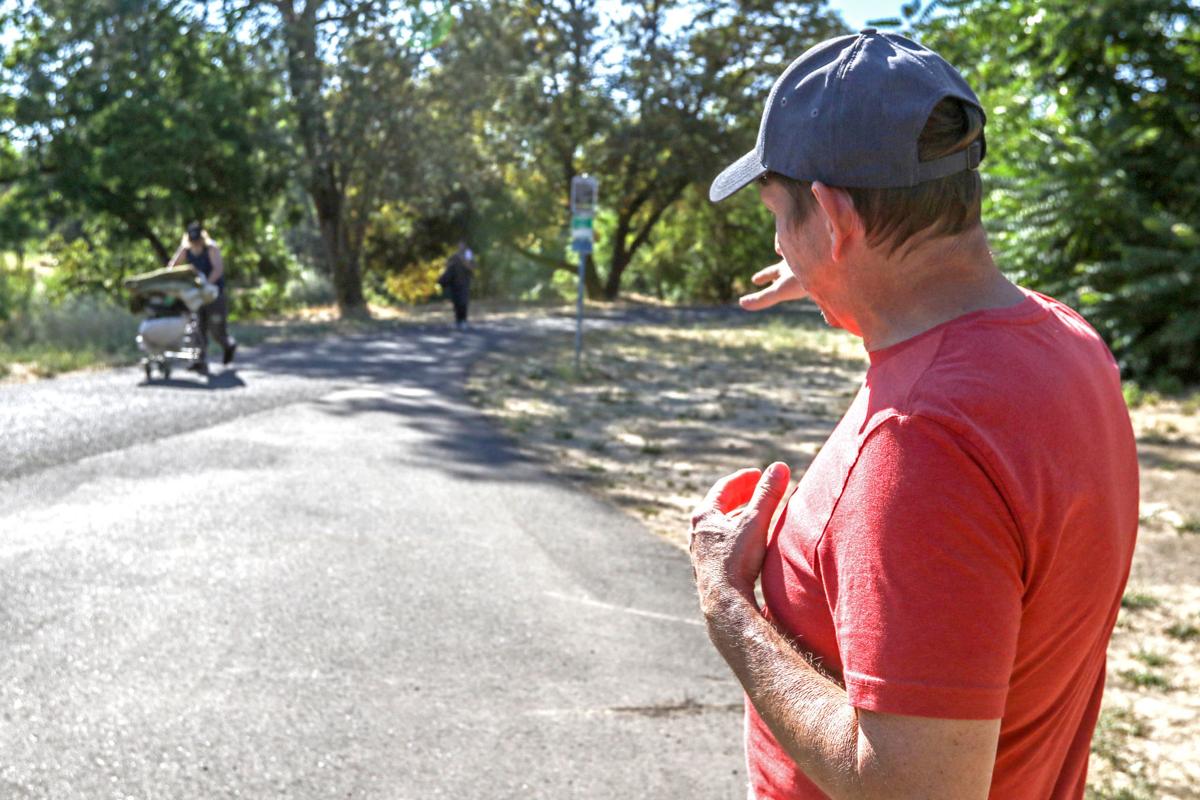 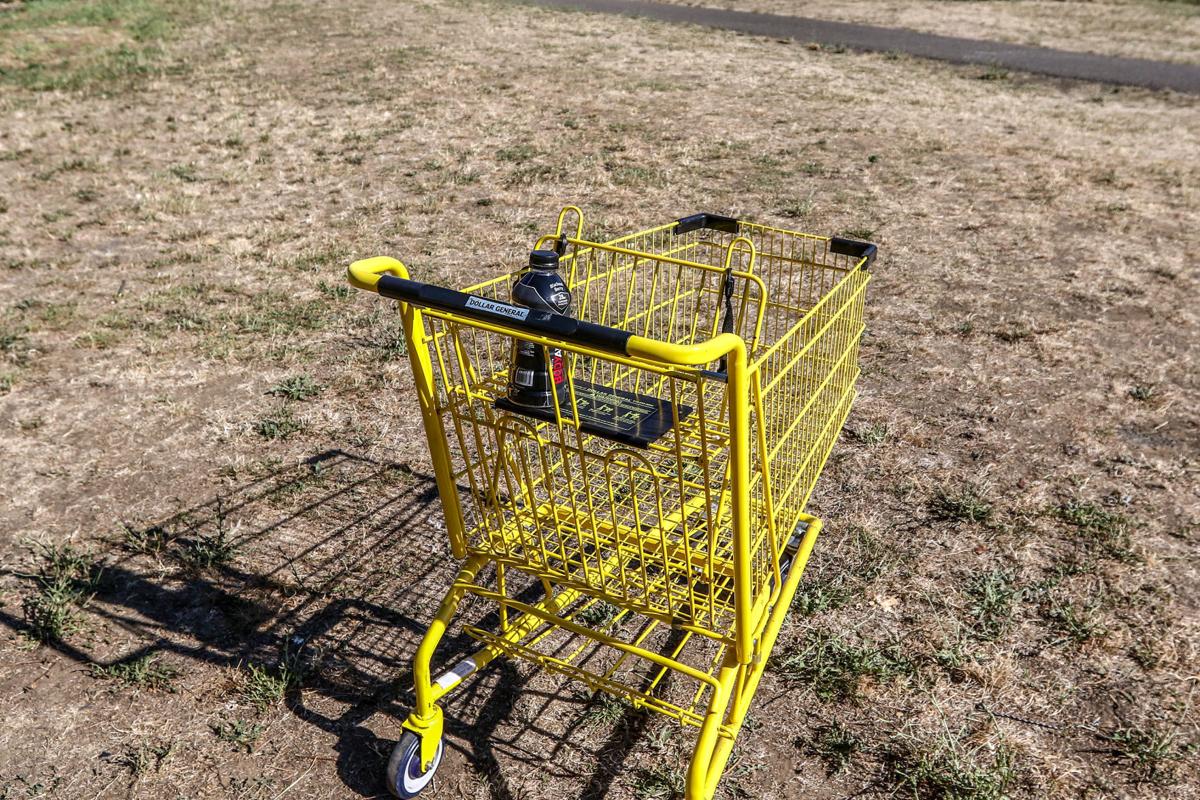 A shopping cart is one of the few visible items after Roseburg police and city officials removed litter and dismantled homeless camps at Deer Creek Park on Wednesday. 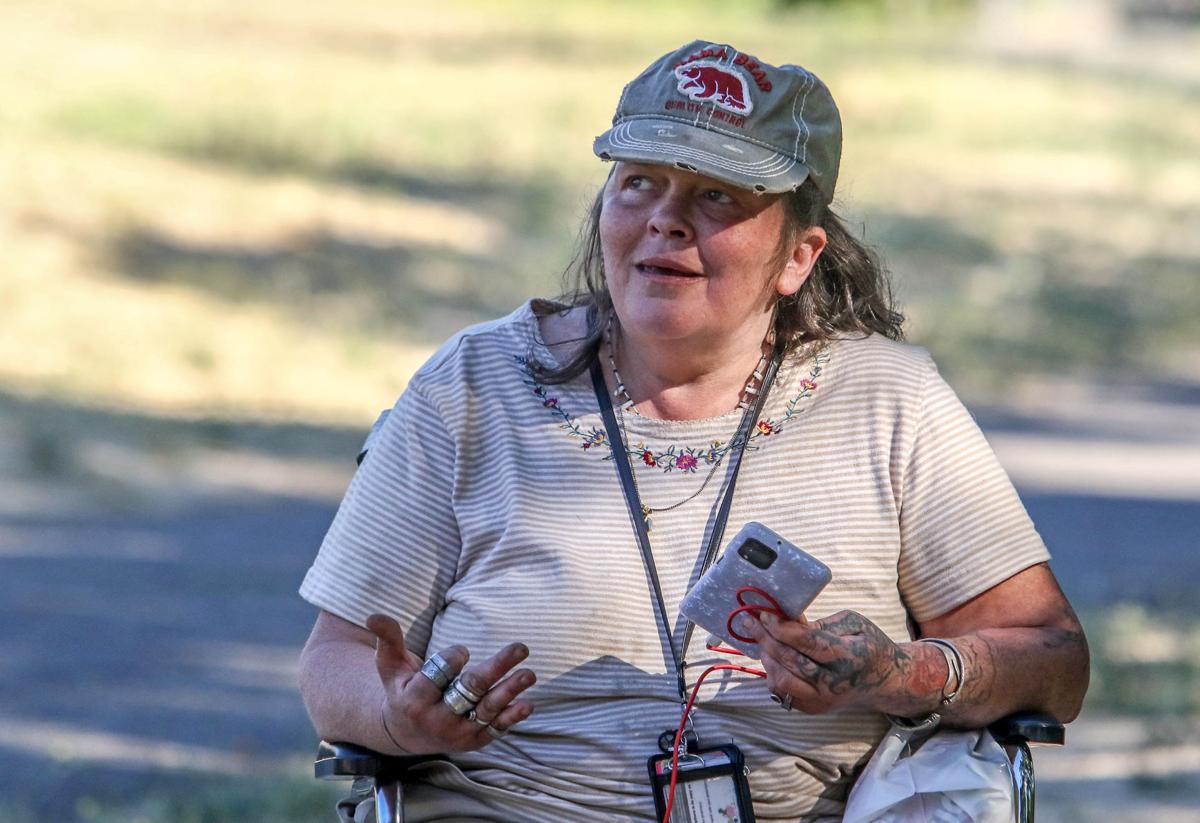 Amy Smith discusses what she witnessed after police and city officials began dismantling homeless camps at Deer Creek Park and removing people who have been living there early on Wednesday.

A shopping cart is one of the few visible items after Roseburg police and city officials removed litter and dismantled homeless camps at Deer Creek Park on Wednesday.

Amy Smith discusses what she witnessed after police and city officials began dismantling homeless camps at Deer Creek Park and removing people who have been living there early on Wednesday.

Wednesday’s cleanup began at about 7:30 a.m., according to several people who were there at the time. By the time the cleanup was finished several hours later, about two dozen camps in the area had been cleared out, displacing about 50-60 people who had been living there.

Police had distributed notices earlier in the week that the sweep was coming. Police were firm during the cleanup, said Max Stafford, an advocate for the homeless who hands out food and other items to people living in the area.

“They made it pretty clear that they were fully prepared to arrest anyone that stood in their way,” he said.

Wednesday’s cleanup follows a similar one conducted at Gaddis Park on Friday. The sweeps are apparently part of a push to remove the homeless from such encampments this summer. On Sunday, Roseburg police posted illegal camping notices at 16 sites throughout the city, according to an email from Suzanne Hurt, a spokesperson for the city.

The notices give people living in the camps 72 hours to leave.

An officer has been visiting known homeless encampments in the city for the past seven weeks, notifying people living in them that the cleanups were coming, the email said. The officer at times was accompanied by counselors from ADAPT, who would offer assistance and housing services, Hurt said in the email.

The encounters did not engender much of a response from those in the encampments, Hurt said.

“The response has been underwhelming; virtually every camper has advised they don’t want assistance,” said Roseburg Police Cheif Gary Klopfenstein in a prepared document. “ADAPT advised over the past six weeks, there has been only one person who has taken advantage of the services offered.”

Stafford and others who were there said the cleanup was chaotic, and there were several people so shook up by it that they were sobbing.

Stafford, who is on a city committee that is seeking ways to help the homeless, said he was so dismayed by Wednesday’s cleanup that he recorded a video of it, which he posted online.

The nearly three-minute-long video shows people scrambling to save what belongings they can before city workers discard them, as police stand watch. Stafford talks over the video, and describes a scene of police “ravishing the camps.”

“This is mayhem down here,” he said on the video. “Such a lack of planning and strategy for these folks. To displace the displaced is just wrong. ... Man, oh man, oh man. Lord help us have mercy on our community as these people throw away the last few items that they have.

“They have nowhere to go, they don’t know what to do with their stuff,” Stafford continued. “They’re disoriented. Crews are here throwing their stuff in the garbage as they are trying to pick through it. It seems like there could’ve been a better plan to land these folks somewhere else. ... This is just wrong in so many ways.”

By late Wednesday afternoon, the scene at the park was completely different. All the camps had been removed and the park was clean and empty, the river quietly flowing by.

A few people who had called the park home just a few hours earlier came by again to survey the situation.

Dustin Benedict said he had lived in the park for about two months and had felt relatively safe and peaceful there. That was shattered by the displacement Wednesday morning he said. And even though he and others had received notice of the cleanup, seeing it unfold was a bit of a shock, Benedict said.

“I was happy being there. I was comfortable. And it was all ripped away. It feels like we were attacked,” he said.

Amy Smith lives in the Gaddis Park area, but comes by Deer Creek Park often to talk to friends there and help out when she can. Smith, who has been homeless for seven years and has some health issues, said the cleanups not only cost her and others their home and belongings but a bit of their dignity too.

“This is like a repeat for me for the last seven years. It breaks my heart more and more every time,” she said. “It feels like abandonment again. It feels like resentment again.”

Christian Ellington agreed. He said he had lived at Deer Creek for a year-and-a-half and had developed a tight bond with many others living there. When he came back to view the scene Wednesday afternoon, he said it was hard to put his feelings into words.

“I lost everything. I lost my family.” 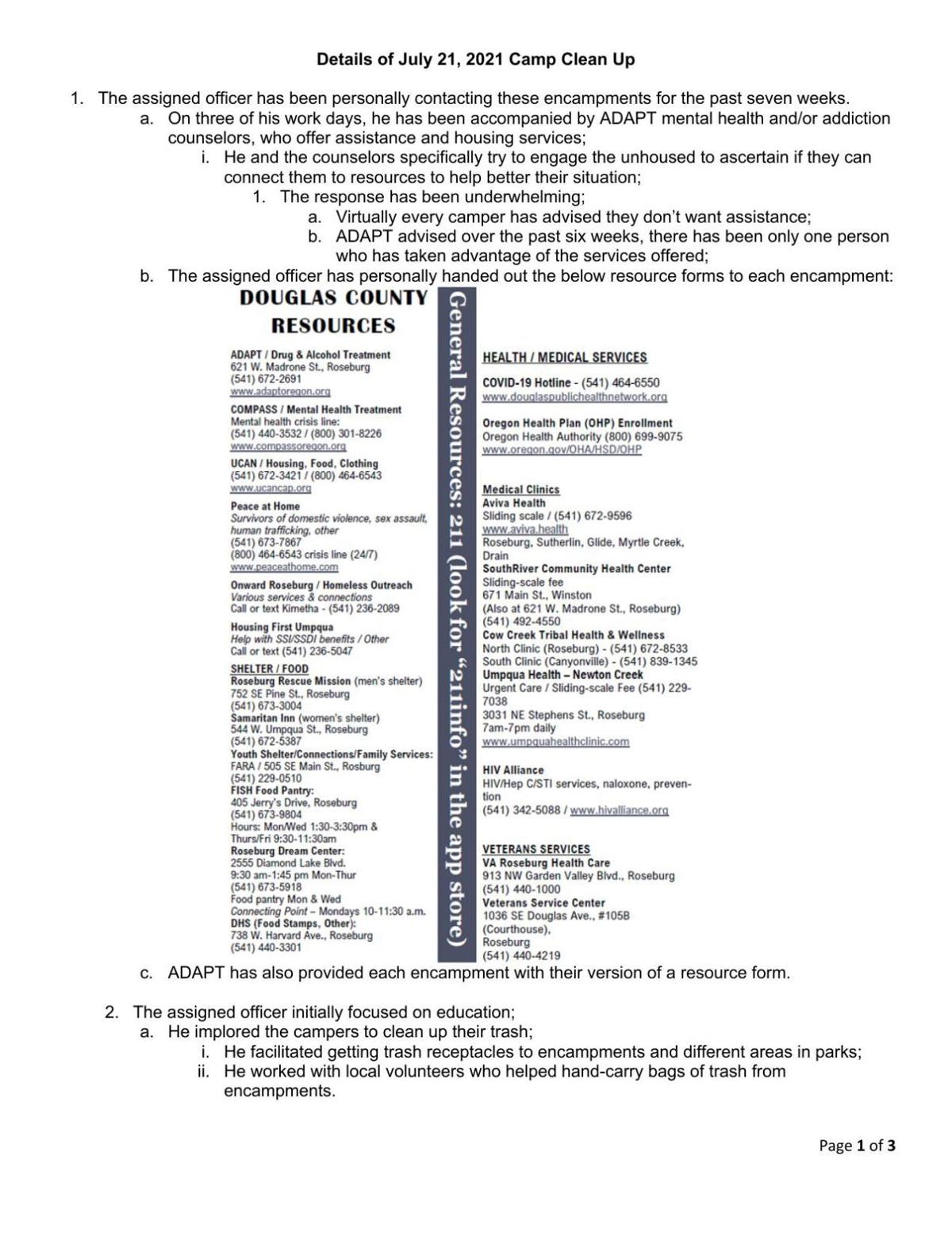 A previous version of this article mistakenly attributed a quote to City of Roseburg spokesperson Suzanne Hurt. The quote was pulled from an email written and sent by Hurt, but contained a document that was prepared by Roseburg Police Chief Gary Klopfenstein.

When 40% of Americans don't have $500 saved up in case of an emergency, how many families in this town are just a hiccup away from being in this exact same predicament? Is the economy getting better or worse? I think it's getting worse and once the federal mandate lifting evictions ends at the end of the month, you're going to see a lot more of this. I guarantee you. We need to figure out Solutions now before the true crisis hits. And that true crisis for anybody could happen in a blink of an eye

I suspect some of those who don't have $500 saved up is because they spend it at your business instead of rent, food, and other things.

One must keep in mind, there has always been a segment of every society who want "to be free" and not have anybody tell them what they can and can't do. That is the mindset of many of today's homeless and it is encouraged by all the warm hearted people who believe they are helping them by providing for their needs without them having to work or be a part of society. It's kind of like the "Field of Dreams" movie where Costner was told "Build it and they will come." Provide a free way to live without being told what to do and the homeless will come from all those places to a place where drug laws are extremely lenient, they can go to the ER when they want, food, clothing, etc. is available for free.

I agree. Some of these people are capable of working.....

The homeless in these camps were given options multiple times. Free rent on the river and in public funded parks is over. If campers were good stewards of the areas they take over people might be inclined to live and let live. Gaddis park had a great bass fishing spot. We were unable to get to the river safely. The vagrants, there trash and the "beware of dog" signs they posted prevented that. Keep in mind a Roseburg police officer was attacked by a pitbull in another encampment. Not in my backyard attitude is brought on by filth, illegal activity and complete lack of respect for nature and those around you. Its not us against homeless. Its us against that type of "tent city". How wonderful it could be if run effiently. Tents, portable washing stations for bathing, laundry and cleaning. A big mess hall filled with tables for eating. Garbage placed in cans. Policing of there area by the residents of the area.

Interesting how the sentiment of this article is pity for the homeless. People should not be living in our public parks. It is unsanitary and makes the public weary of visiting them - the public - the people who’s taxes pay for the upkeep of these natural areas. When there are encampments in our parks there is human waste and trash all over the place. This is not ok. Our kids can’t play there.

Practically every single business is hiring in Roseburg. There are more jobs than applicants. The city ought to set up a temporary shelter similar to those they’ve set up in Eugene so that the homeless can have an address, which then makes them eligible to apply for work and get their lives back on track. Many may be unwilling to do this. However, they cannot camp in parks and be a leach onto society. We have to be tough to discourage people from sloth and laziness and encourage them to get their lives together.