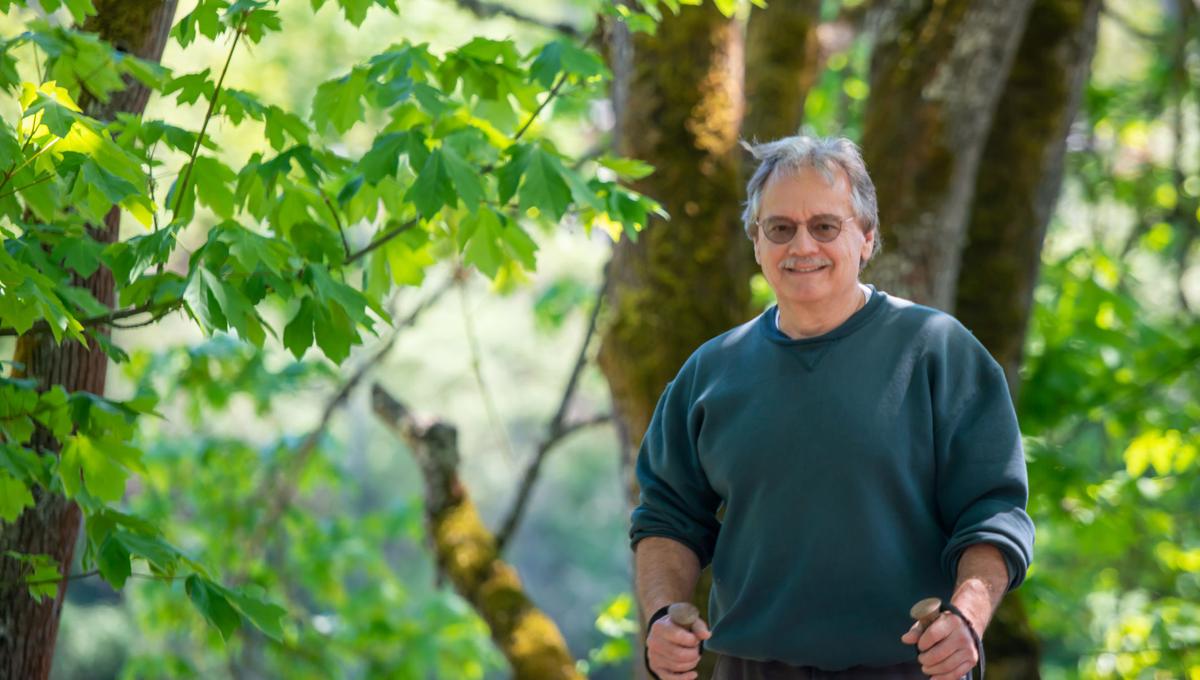 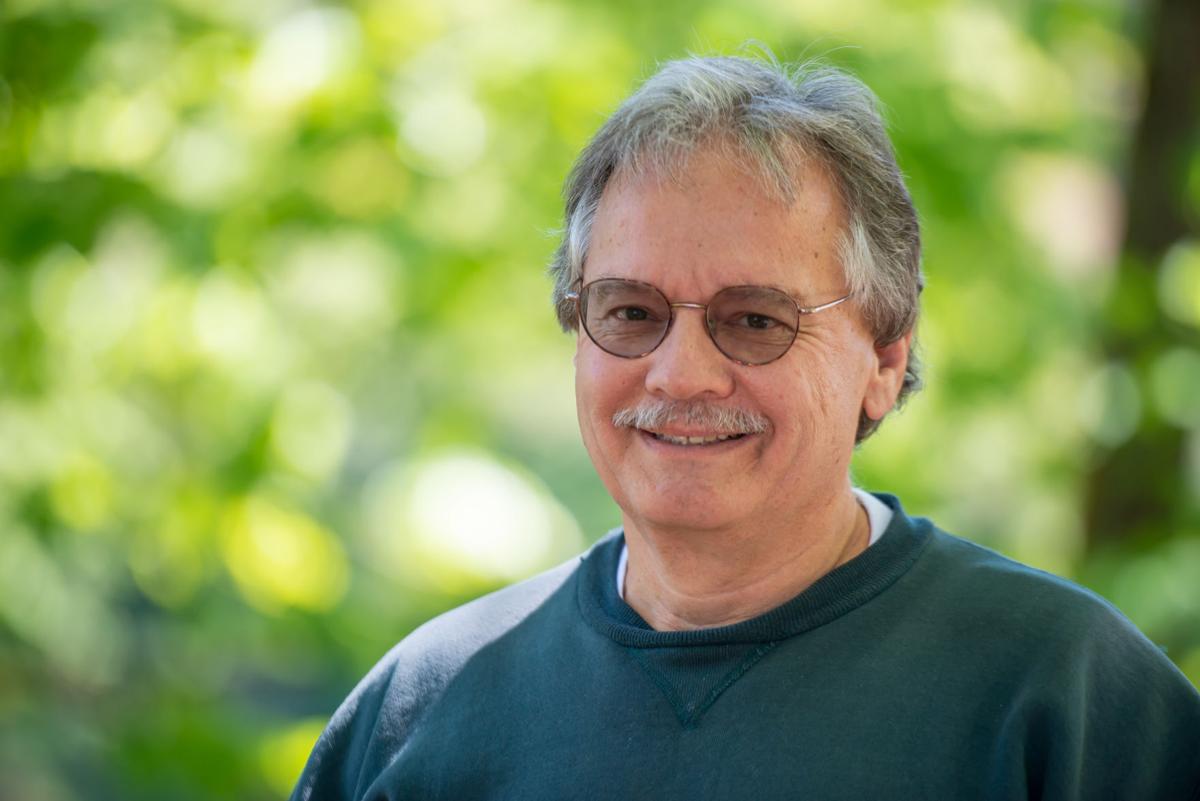 Larry Rich has been the mayor of Roseburg for 22 years. He won his first term in 1998 and hasn’t been out of the seat since. He ran unopposed in the November election. 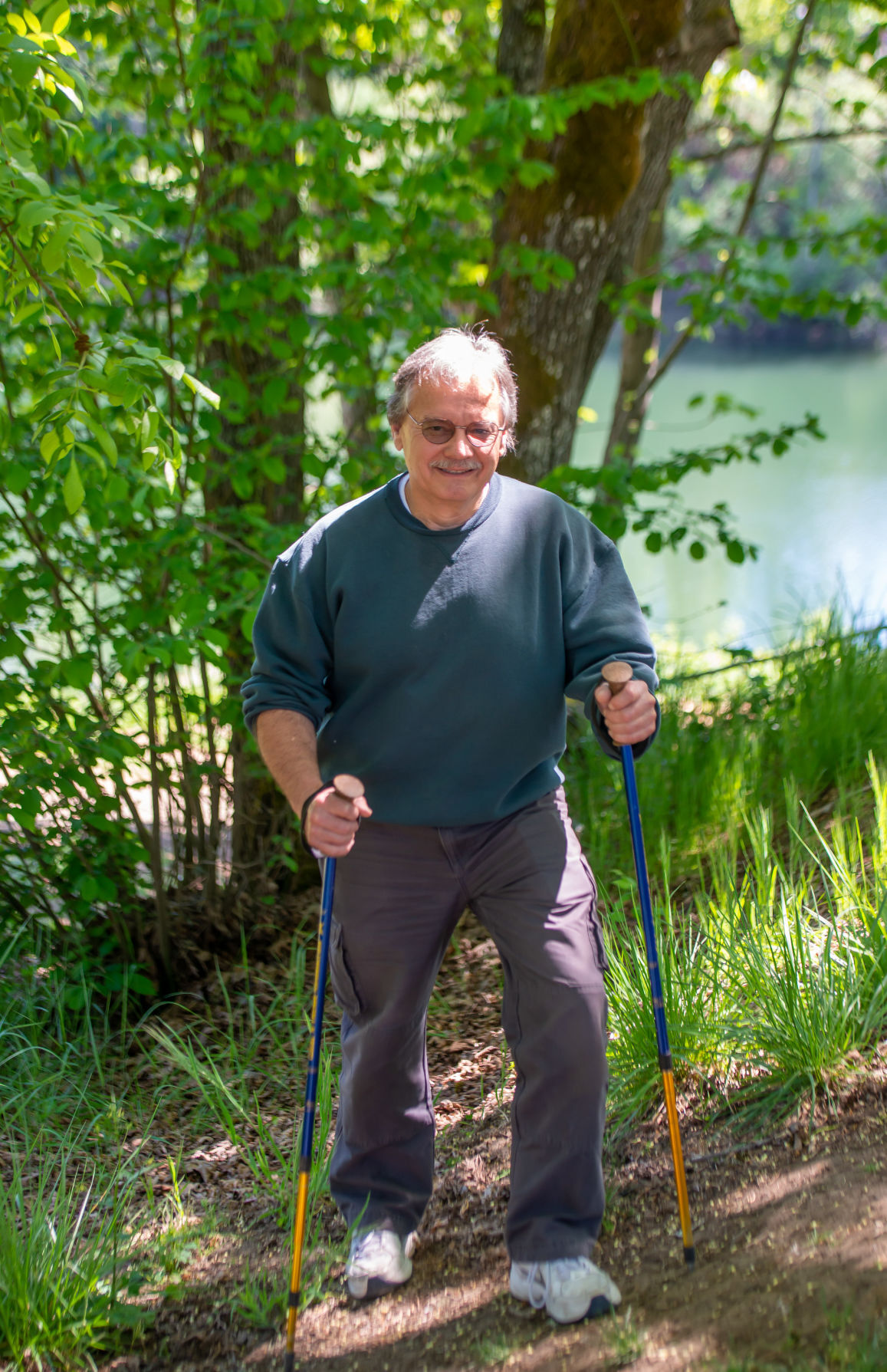 Roseburg mayor Larry Rich enjoys his opportunities to get out and hike in the woods. 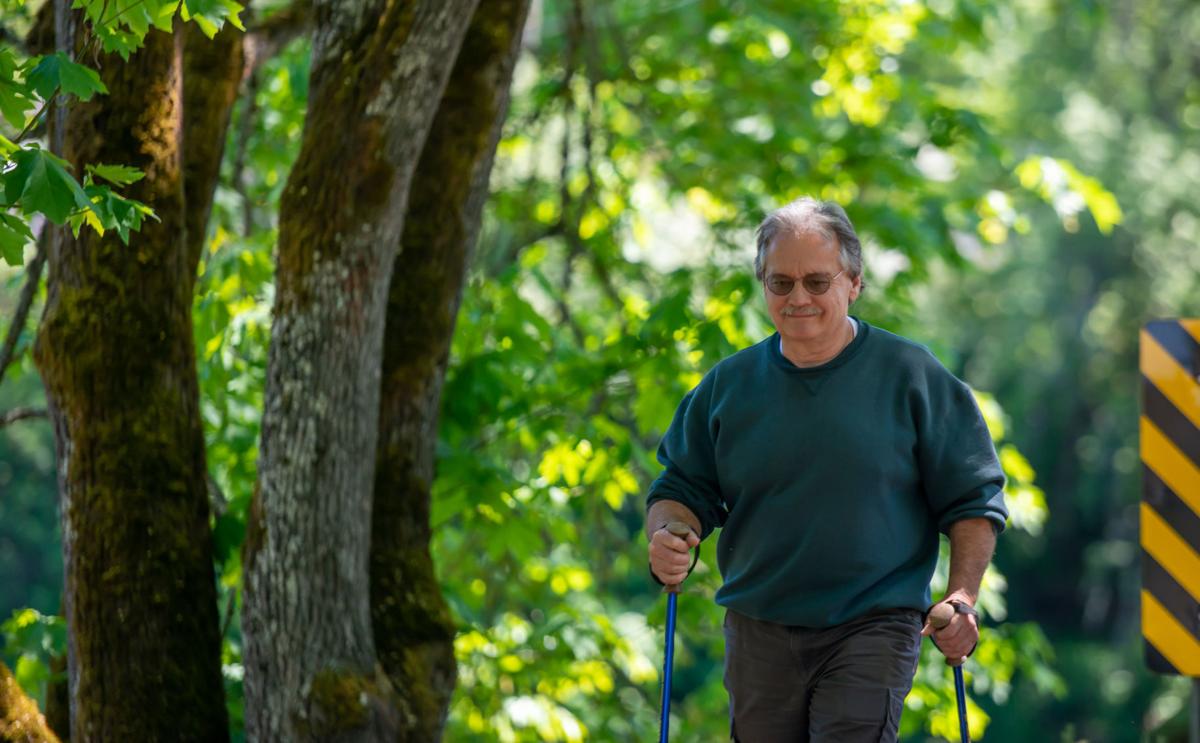 A determined hike in the woods is relaxing for Roseburg mayor Larry Rich. 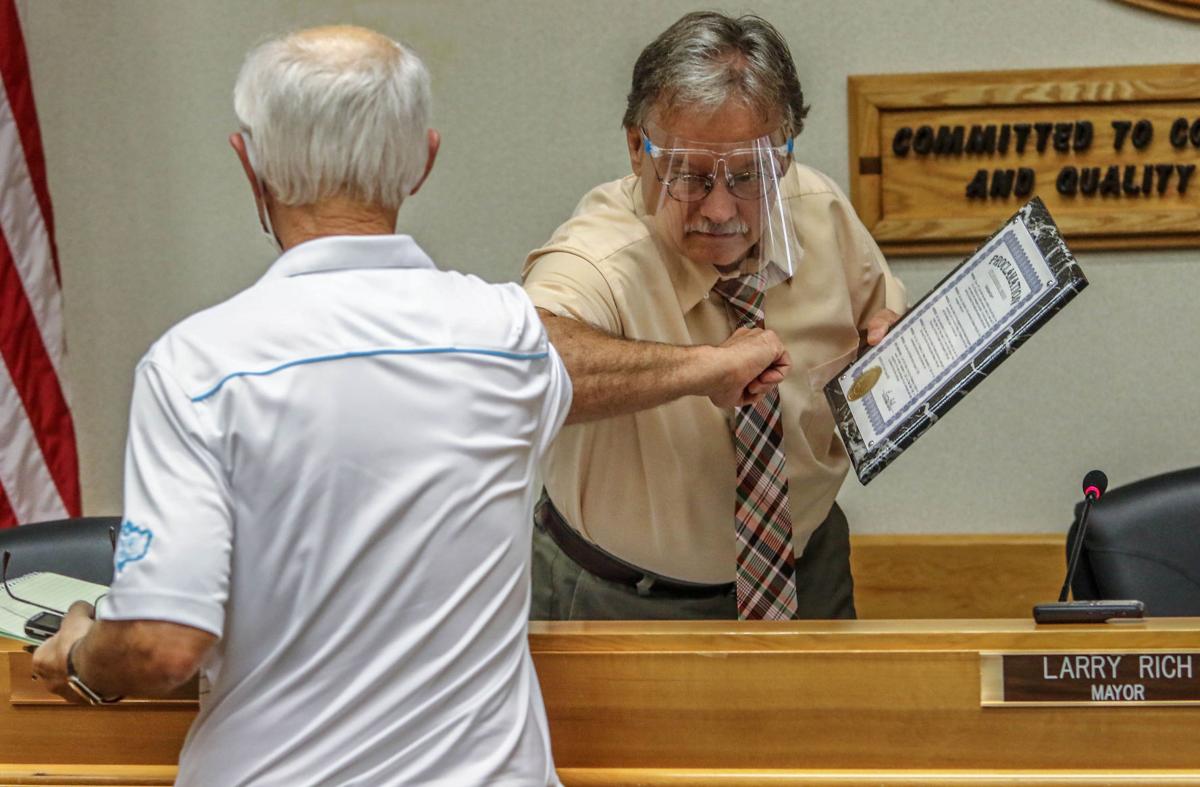 Roseburg Mayor Larry Rich greets Dan Bain with an elbow bump before presenting him with a proclamation declaring Sept. 4, 2020, as ‘Dan Bain Day.’ 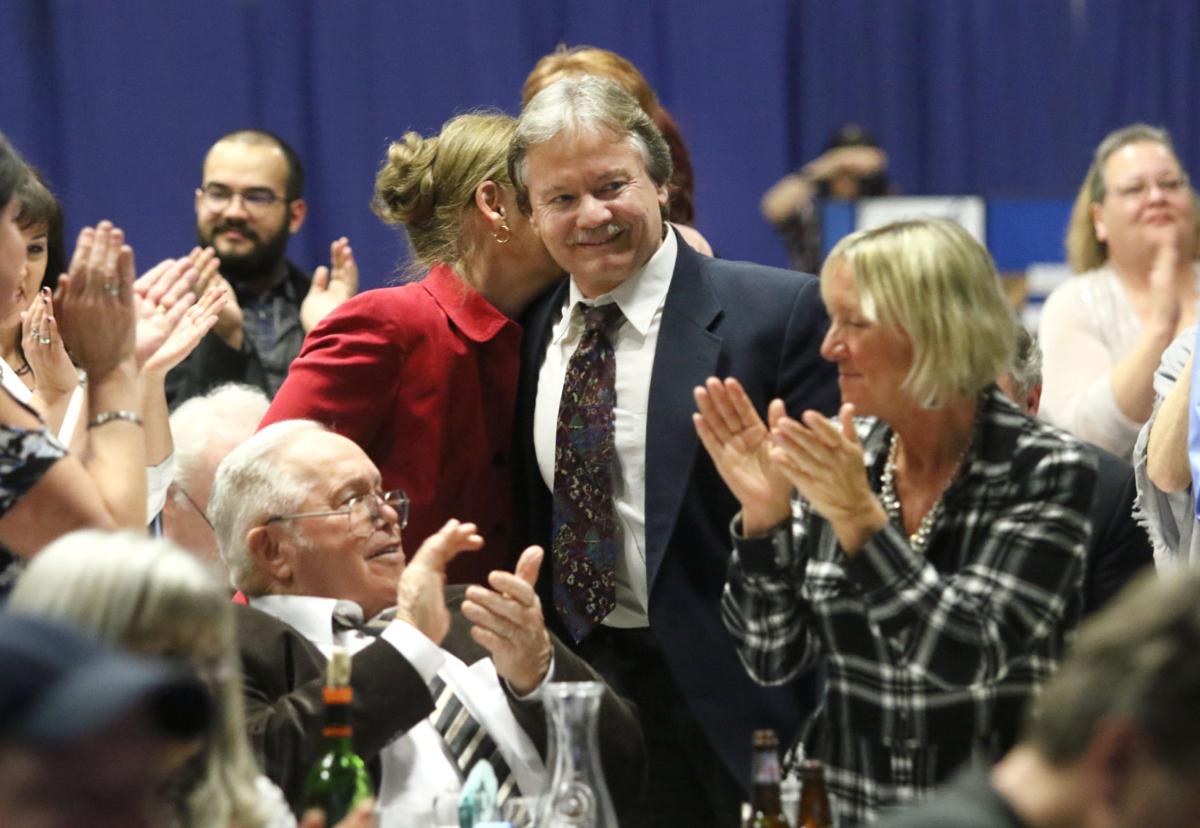 Larry Rich is greeted with a standing ovation in January 2017 after being named 2016 male First Citizen during the 63rd annual Roseburg Area Chamber of Commerce First Citizens banquet.

at the Douglas County Fairgrounds.

Larry Rich has been the mayor of Roseburg for 22 years. He won his first term in 1998 and hasn’t been out of the seat since. He ran unopposed in the November election.

Roseburg mayor Larry Rich enjoys his opportunities to get out and hike in the woods.

A determined hike in the woods is relaxing for Roseburg mayor Larry Rich.

Roseburg Mayor Larry Rich greets Dan Bain with an elbow bump before presenting him with a proclamation declaring Sept. 4, 2020, as ‘Dan Bain Day.’

Larry Rich is greeted with a standing ovation in January 2017 after being named 2016 male First Citizen during the 63rd annual Roseburg Area Chamber of Commerce First Citizens banquet.

at the Douglas County Fairgrounds.

Editor’s note: This is the second in a series of monthly profiles of the mayors of Douglas County. “Meet The Mayors” explores the men and women who occupy the most visible unpaid role in each of their respective cities.

Never again will Roseburg mayor Larry Rich show up for a flight looking like a desperado.

Some years ago, Rich and his wife handed over their passports for inspection at the Honolulu airport. The two were returning home from a trip to Australia. As Rich recalls, his wife, Alpha, went through the line with no problem. But he was forced to wait while security officials ran a check on his passport.

“My wife looked nice and well-kept,” Rich recalled. “My hair was messed up, I had on a tank top full of holes — I looked like I’d been surfing. They looked at me and thought, ‘Who’s this character?’”

Rich got his passport back from a surly man who informed him that his documents had been checked against a list of America’s most wanted fugitives.

“My wife said, ‘That’s it. You are no longer dressing like that (in airports),’” Rich said.

Temporary detention was a role switch for Rich. Before he retired in 2017 as assistant principal at Roseburg High School, part of his duties dealt with student discipline. He’s also presided over Roseburg City Council meetings since winning his first mayoral election here in 1998.

City employees who have worked with Rich agree he’s diligent and hard-working in the role. But never self-important.

Koree Tate, management assistant in the city’s administration office, said Rich handles his public duties with compassion, as when working on the problem of homelessness in Roseburg. Yet he is friendly and upbeat at ribbon cuttings, community contests, sister city gatherings and grand openings.

He’s perhaps at his most buoyant, though, on student tours of City Hall.

“He has a lot of fun with kids while they are pretending to be city councilors,” Tate said. “He’s great at corralling them when they get nervous or excited.”

Former Roseburg City Recorder Sheila Cox worked with Rich for nearly 20 years before her 2018 retirement. She described him as probably the most honest and forthright person she’s ever met.

“And I do know he loves being mayor,” Cox said. “I have never known anybody who enjoyed being mayor as much as Larry, and I’ve worked with a few.”

The only time Rich might have been less than thrilled in the role was during his first state of the city address in January 1999. He’d just been elected the previous November and had no idea what to say on the topic.

“I had to call people (before the meeting) to tell me how we were doing,” he recalled. “It was the most awkward moment ever.”

Usually, though, Rich appears to get more pleasure than frustration in the mayor’s seat. Now 65, he’s been Roseburg’s only mayor throughout the 2000s. He said one of the perks of the job is meeting people that the average citizen doesn’t get to encounter, including two U.S. presidents who came through town.

Rich seems to have a knack for thriving in most situations. He likened his RHS academic year as a nine-month stint at summer camp. At his first teaching job in La Pine, he once showed up to work on Saturday, wondering why the parking lot was empty.

Becoming an educator enabled Rich to maintain hours far more reasonable than those of his first job. He graduated from Aloha High School in 1974, then enrolled at Oregon State University. While in college, he worked for the U.S. Postal Service. His duties included stacking mail in post office boxes from 3:30-7:30 a.m.

Rich taught auto shop and driver’s education for a year in La Pine before deciding to get a master’s in math education at Oregon State University. He later earned an administrative certificate through the University of Oregon. He, therefore, has the credentials to root for the Ducks as well as the Beavers.

Rich’s introduction to public service took place in Junction City in the early 1990s. A question of eminent domain involving his property spurred him into running for city council in that town. Less than a year later, in 1993, he took the job at Roseburg High and was on the city’s planning commission for about four years before filing for mayor.

Away from his responsibilities, Rich thrives on outdoor activities — particularly on or along the North Umpqua River and its trails. He’s an avid traveler as well. One of his favorite treks was to Jerusalem. The reality of the Sea of Galilee and the Judean Desert brought biblical stories to life, he said.

“It was a shock to see what they call a desert — all the rocks, and so very hot,” he said. “It makes Arizona look like a picnic ground.”

Wherever future travels may take him, Rich likely will be happy to return to his civic duties in Roseburg. Assuming he can stay off the FBI’s radar.

Tricia Jones is a freelance journalist from Roseburg and a former employee of The News-Review.

Question: What U.S. city or state is highest on your bucket list?

Q: What’s something you no longer have that you wish you’d kept?

A: My Boy Scout patches.

Q: You can only watch one movie for the rest of your life. What is it?

Q: Name a skill or talent you have that very few people know.

A: (Preparing) income taxes. I used to have a license.

Q: What contest do you hope never to have to judge?

Q: What five words do you want in your obituary?

Larry is a good man and a dedicated public servant. Although mayor is an elected position, it is unpaid. There have been several times when the Big Money Men in the county spent thousands of dollars to get their own guy into this unpaid position. Larry easily won by a large margin. The people said no to the special interest groups and the big money. They said yes to Larry's honesty and integrity. We're lucky to have him.

How would we ever even know if someone else could do better?

That's what elections and campaigns are for -- the opportunity for the electorate to vet candidates on experience, background, education, and their ideas regarding the types of public policy they would like to implement. Just running through a bunch of new people because they might (fingers crossed?) be better seems like an awful way to govern.

Who needs Democracy when you have a dictator? There has only ever been one mayor of Roseburg in my entire life. What a joke. Term limits.

Because who needs new ideas, who needs variety in leadership, who needs to term limits? Not America. We are doing great!