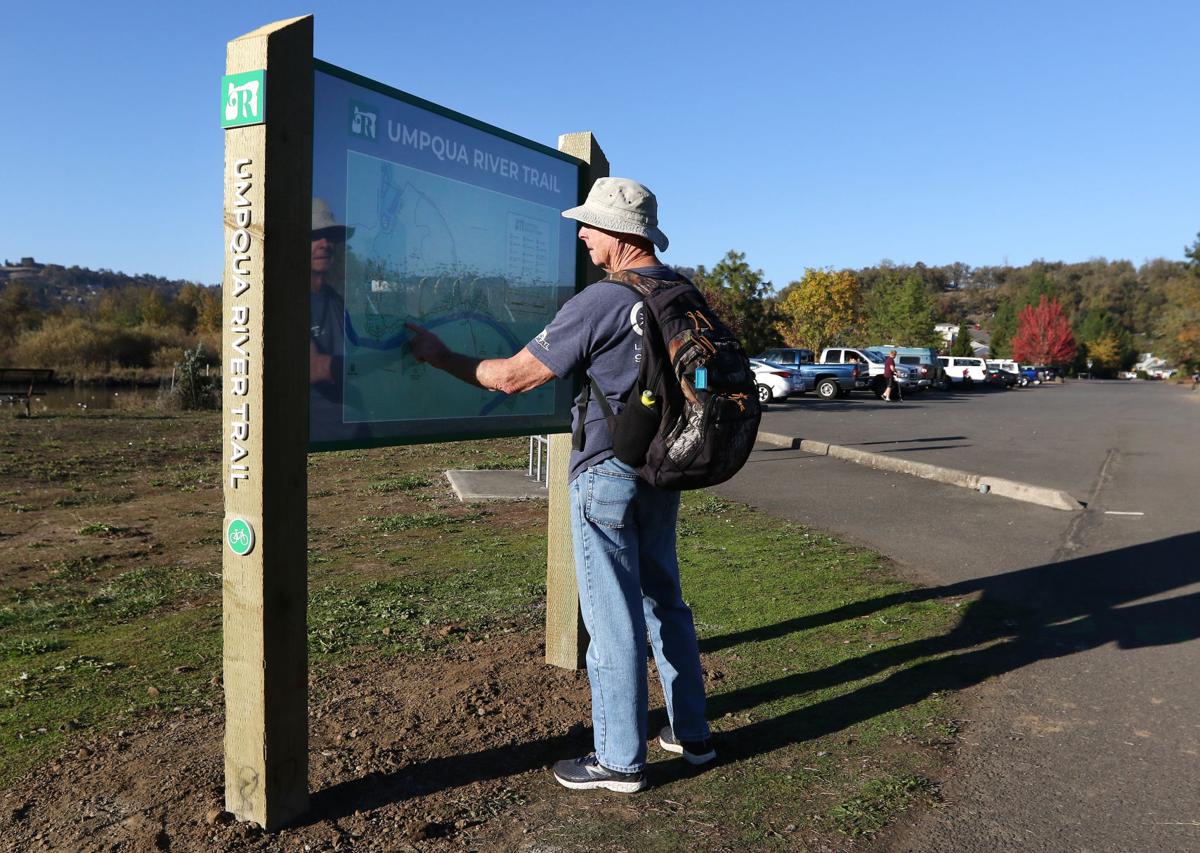 Jay Cosley, of Roseburg, checks out a sign recently installed near the duck pond in Stewart Park that depicts several trails in the area, Wednesday in Roseburg. 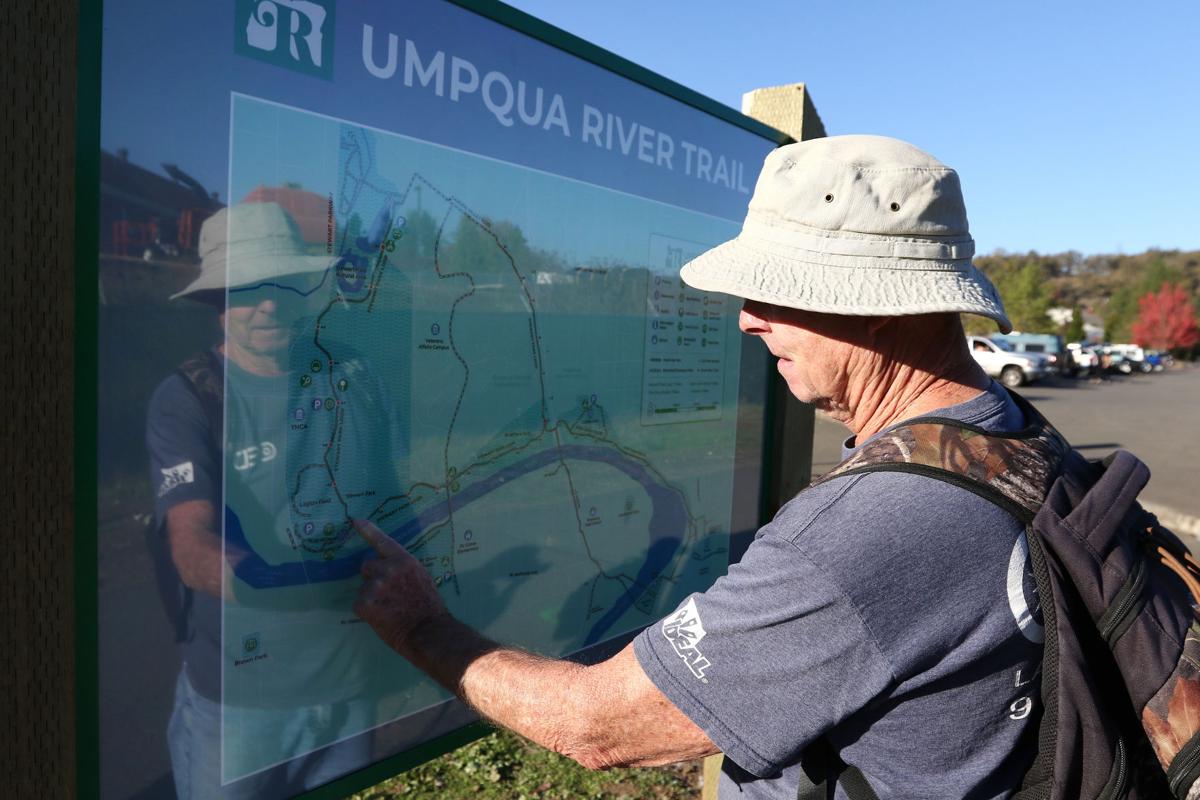 Jay Cosley of Roseburg checks out a sign recently installed near the duck pond in Stewart Park that depicts several trails in the area, Wednesday in Roseburg. 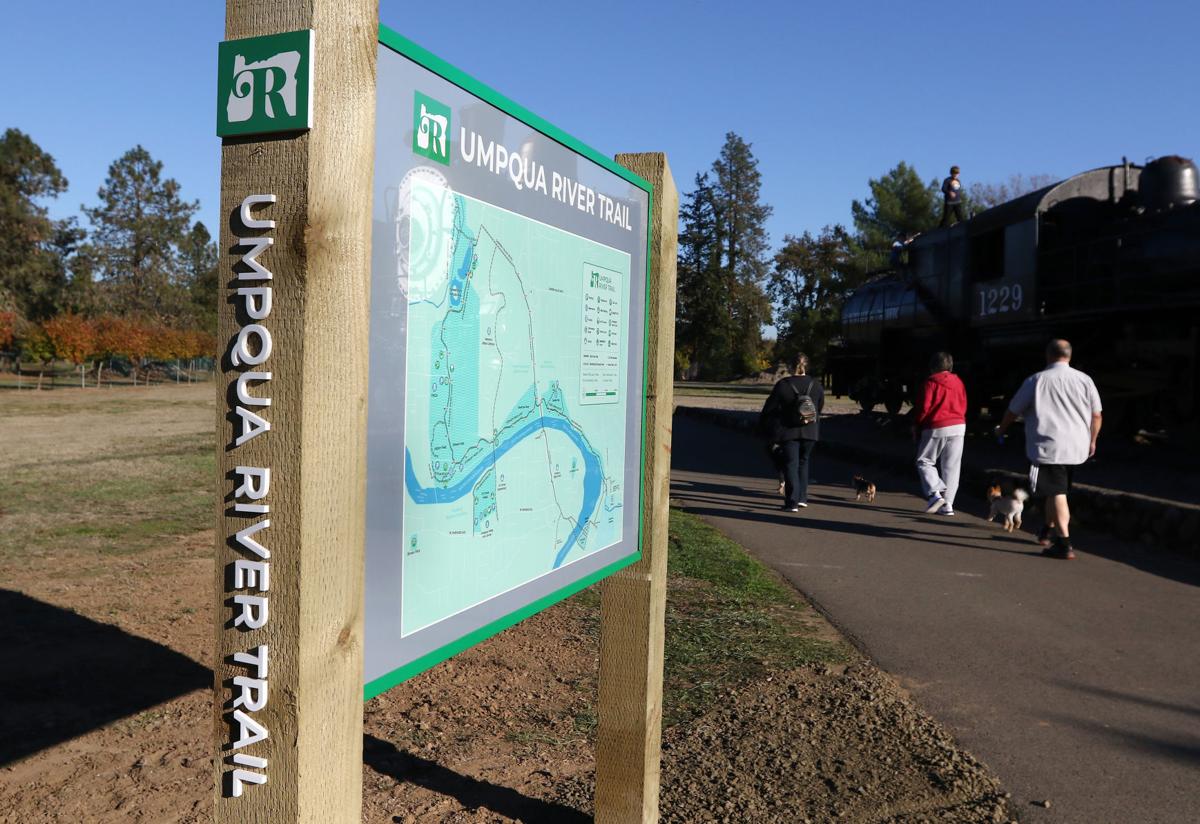 A recently erected sign in Stewart Park in Roseburg shows several trails in the area that extend into the downtown area.

Jay Cosley, of Roseburg, checks out a sign recently installed near the duck pond in Stewart Park that depicts several trails in the area, Wednesday in Roseburg.

Jay Cosley of Roseburg checks out a sign recently installed near the duck pond in Stewart Park that depicts several trails in the area, Wednesday in Roseburg.

A recently erected sign in Stewart Park in Roseburg shows several trails in the area that extend into the downtown area.

A new set of signs are going up on the multi-use path in Stewart Park to help people find their way around the park as well as the connecting pathways in the area.

The “wayfinding” signs are the result of a partnership between the City of Roseburg and Blue Zones Project in an ongoing effort to promote health and wellness throughout Roseburg. The signs are intended to promote healthy lifestyle choices, such as biking, walking, running and other recreational activities. The new signage at key intersections along the multi-use path will make it easier to navigate the various pathways that connect the park to downtown, Gaddis Park and other areas of Roseburg, according to a city news release.

The new signs are being placed at two locations in Stewart Park: next to the locomotive engine and near the natural area pond. A ribbon-cutting ceremony to commemorate the signs is scheduled for 4 p.m. Friday at the locomotive engine. Due to state requirements, social distancing measures and masks will be required to attend the event.

“Three years ago, Wayfinding was selected as the marquee project for Blue Zones Project,” said Jessica Hand, executive director for Blue Zones Project—Umpqua. “With community-driven participation at its center, an effective marquee project capitalizes on a local community’s assets, inspiration and potential. That is exactly what this wayfinding project represents. It showcases the steps that our city and community are taking to promote an active lifestyle and to highlight the wonderful landmarks and assets our city has.”

The project dates back to 2017, when Blue Zones had internal discussions about marquee project ideas. Then Blue Zones turned to the city with the idea of creating a wayfinding system in Stewart Park. Wayfinding, which is a term used to describe the process of navigating from place to place, was identified by the group as a top priority for the pathway system. Since then, city staff inventoried existing signage at the park as well as researched different signage options that could be installed.

“We have this amazing park right in the center of town but the problem is, unless you live here, it can be difficult to navigate,” Community Development Director Stuart Cowie said in the release. “While researching sign options, we had to put our tourist hats on and think in terms of branding and overall look and feel for the signs. At the end of the day, we want these signs to be functional but also embody a sense of community pride.”

For more information about the new wayfinding signage at Stewart Park, please contact the city parks and recreation division at pwd@cityofroseburg.org, or 541-492-6730.