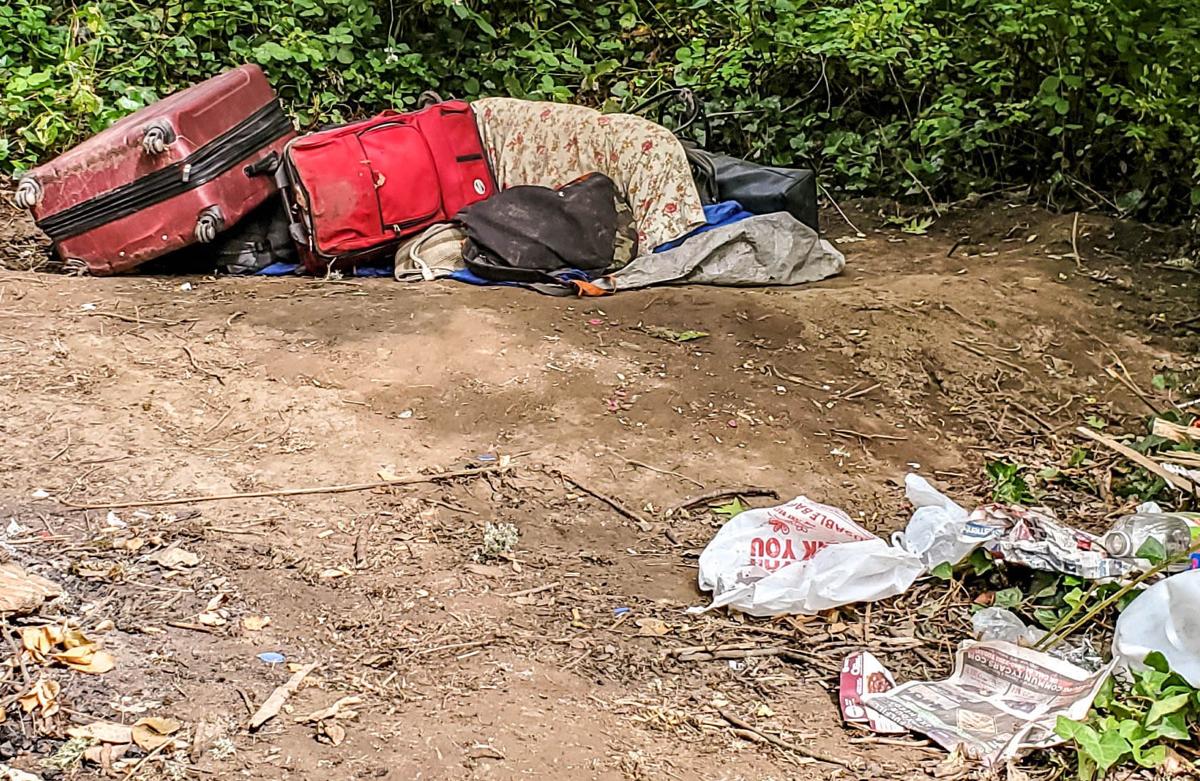 An example of some of the debris visible at Micelli Park on Monday. Roseburg City Council on Monday addressed issues with the homeless camps next to the South Umpqua River after residents of the area voiced concerns at the council’s meeting. 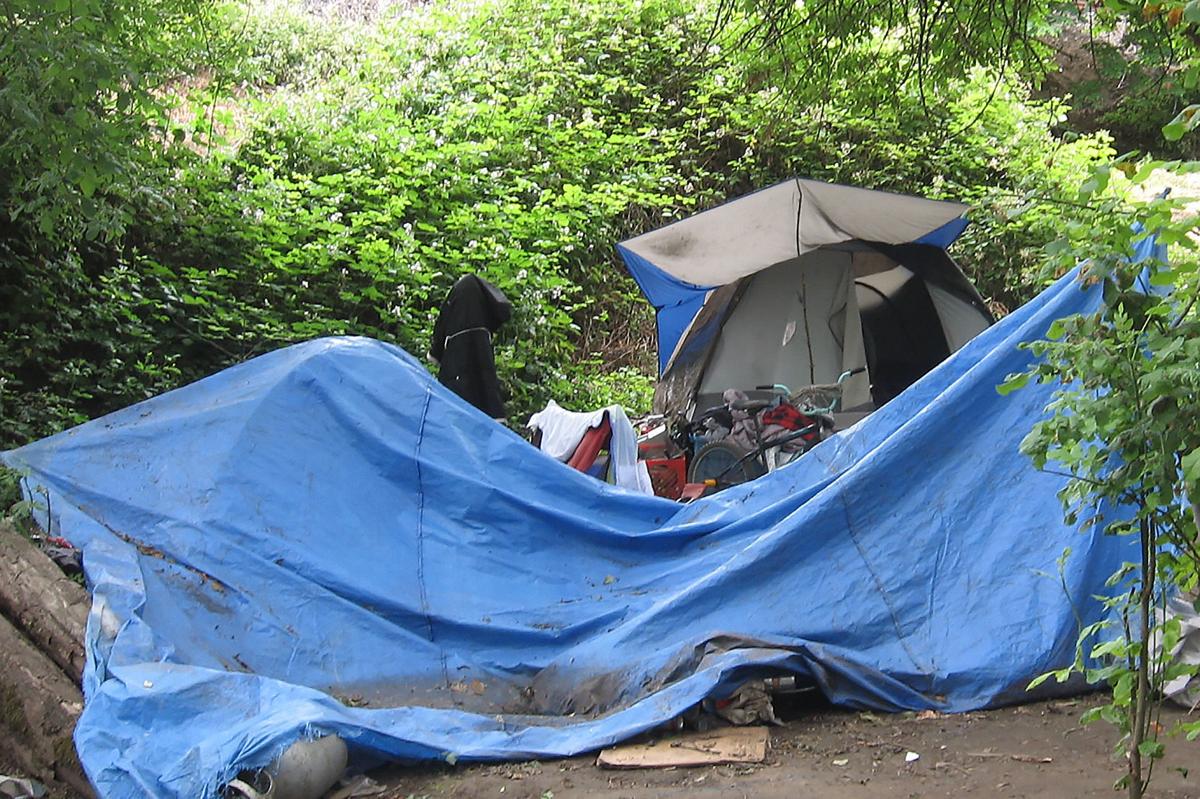 One of the homeless camps visible at Micelli Park.

An example of some of the debris visible at Micelli Park on Monday. Roseburg City Council on Monday addressed issues with the homeless camps next to the South Umpqua River after residents of the area voiced concerns at the council’s meeting.

One of the homeless camps visible at Micelli Park.

Janet Lamm addressed the Roseburg City Council with a dire message: she and her neighbors on Kendall Street near Micelli Park are tired of the homeless people camping along the South Umpqua River near their properties, which she said has persisted for years.

“It has been out of control this year,” Lamm said. “I cannot express to you the destruction, the violence, the absolute fright that I have in the middle of the night when our dogs bark and our motion lights start going on. I no longer feel safe. I am blaming the city.”

Lamm made that statement to the City Council last August. She was back before the council on June 8 and said nothing had changed. Lamm complained again about the homeless encampment in the park, telling the council that those living there are loud, do drugs in the open and pollute the nearby river.

Monday evening, Lamm attended another council discussion on homelessness. Audience participation was not allowed, so Lamm did not get a chance to speak.

Monday’s meeting followed a series of goal-setting sessions the council held last winter before approving goals to focus on for the next two years, including “Explore strategies to address issues related to unhoused individuals within the community.”

A set of action items listed under that goal included identifying the city’s role in the unhoused crisis, which was Monday’s topic. Each of the eight city councilors and Mayor Larry Rich were given time to explain their positions.

“I feel like this is a final after three-and-a-half years of studying this as a city councilor,” City Councilor Brian Prawitz said. “So it’s a big deal.”

At times, the discussion got personal.

“We’re treating our mentally ill very poorly and we’re not forcing addicted people to get into programs that will help them,” he said. “These people have lost their way or have never found their way.”

Councilor Andrea Zielinski was moved to tears as she described her frustration and sympathy as a volunteer working with the unhoused, and how great the need is in the community. She recalled one woman who was living in a motel with her boyfriend and three children, all one day away from living on the street.

Zielinski also said COVID-19 has made her realize the shortage of resources available to people in need.

“It’s really bringing to the surface the cracks in our system,” she said.

Councilor Ashley Hicks said she was born and raised in Roseburg and always intended to spend her life here. She said her family bought property in South Roseburg, built a house there, and “fell in love with the neighborhood and our community.”

Hicks opened a coffee shop on Southeast Jackson Street near Eagles Park, where a weekly feeding program for the homeless began.

She said on those days, the line would snake down Southeast Jackson Street, blocking the entrance to businesses. There was also drinking and fighting, she said.

“Those were every day occurrences downtown,” Hicks said. “Fighting like the old Wild West right in the middle of the street. Just complete craziness happening down there, lawlessness.”

Hicks said that experience, and problems associated with homeless camps near her home, were the main reasons she became a city councilor.

“I thought being in a city council position, that we could pass policy and fix it,” she said, adding that she is still waiting for meaningful action to be taken.

Several councilors suggested Roseburg look at programs in other cities that have been successful. Zielinski pointed to a program in Eureka, California, that pairs the homeless with mentors to help them get the resources and services they need.

“I think this is something that would be wonderful here in our community,” she said.

Prawitz touted a program in Walla Walla, Washington, that offers 30 Conestoga huts for the homeless. The huts cost about $1,000 each to build and are placed on city property in Walla Walla, he said.

“They are truly emergency housing, that is it,” Prawitz said. He suggested a pilot program here, starting with 10 huts, that would be built and operated by a local community organization.

Mayor Larry Rich has said he plans at least two more of these city council discussions on homelessness.

The next one is scheduled for 6 p.m. on June 29. A half-dozen agencies that work with the homeless, including Roseburg Rescue Mission, Adapt and Compass Behavioral Health, will be asked to participate, Rich said.

I see that two days ago, there was a homeless bum living on the sidewalk in a tent near the freeway entrance close to Lowe's. I wont' be long before a second and a third and a fourth. Before you know it, taxpaying citizens will be forced to step out into the street because the sidewalk is blocked by homeless bums.

You cannot build a "village" for the homeless - there would be over 1,000 more seeking refuge within the week.