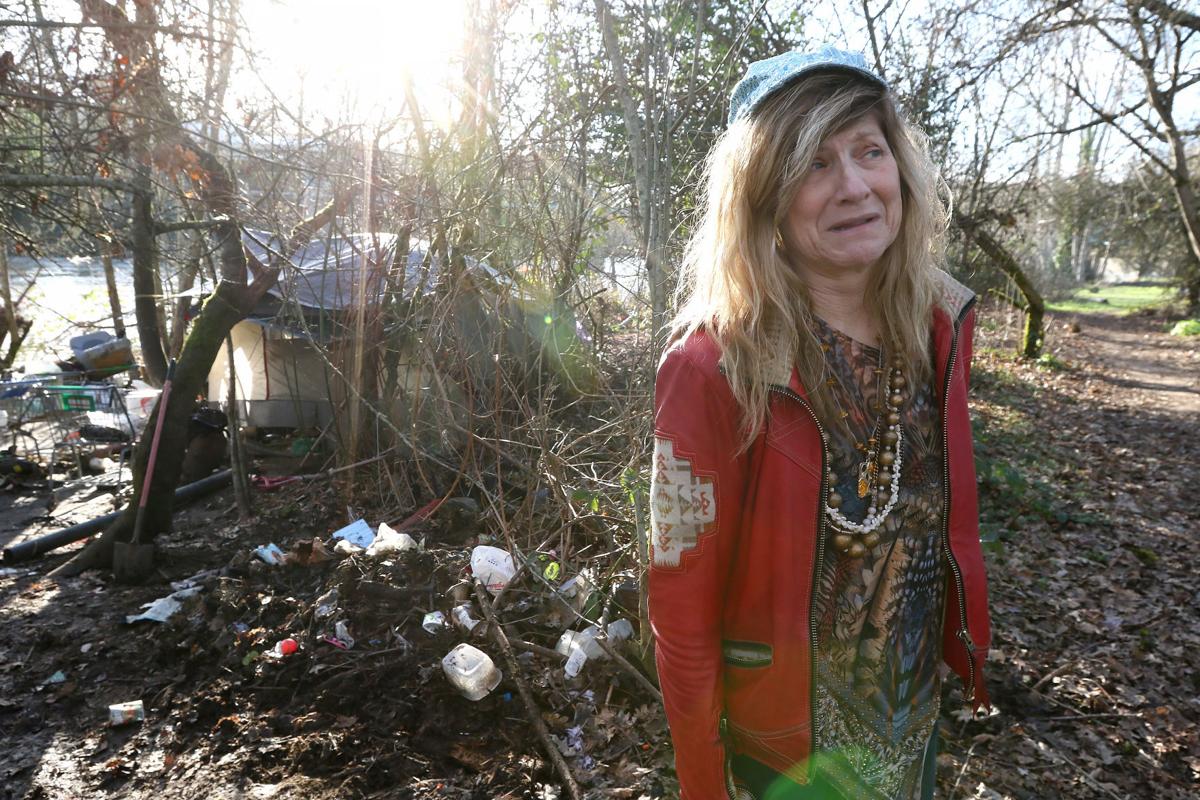 Shari Holzen-Phillips leaves a homeless camp on the bank of the South Umpqua River in Gaddis Park earlier this month. She got emotional as she talked about the lack of compassion in the world. 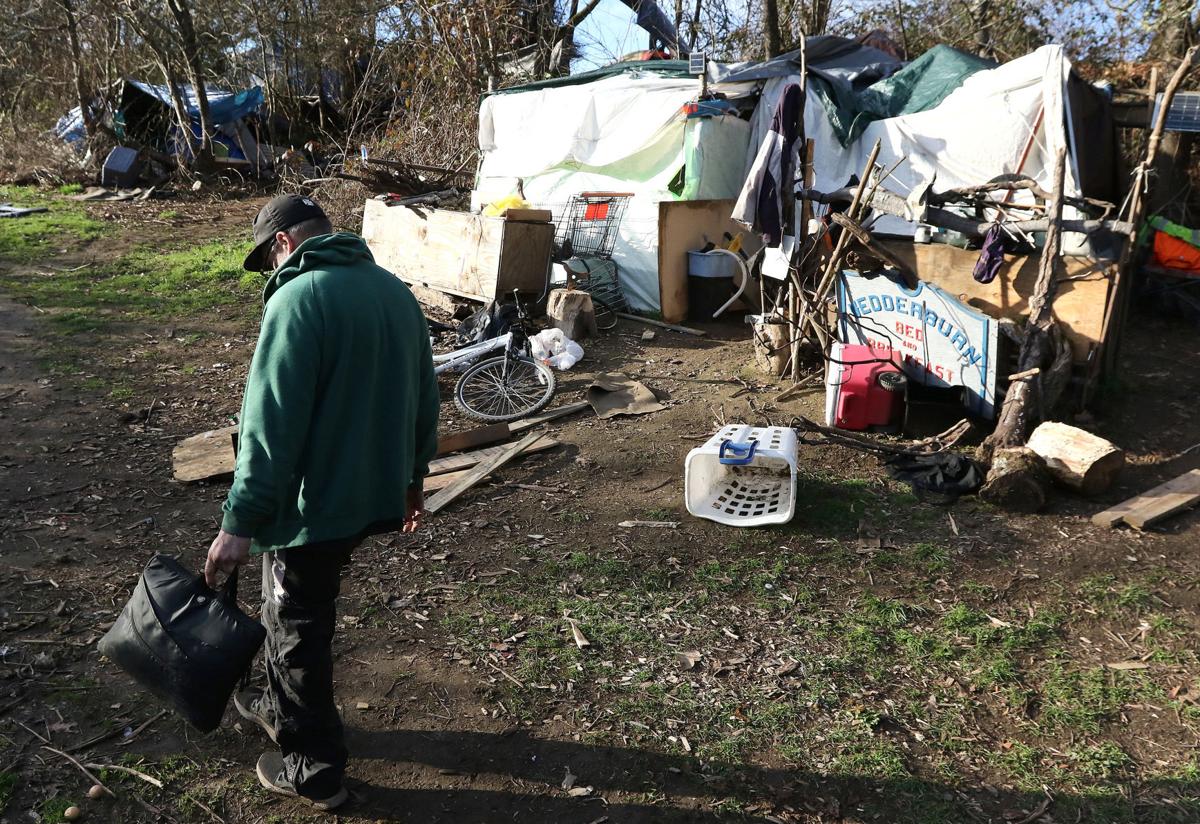 Reyn Gerber walks past a homeless camp on the bank of the South Umpqua River in Gaddis Park recently.

Shari Holzen-Phillips leaves a homeless camp on the bank of the South Umpqua River in Gaddis Park earlier this month. She got emotional as she talked about the lack of compassion in the world.

Reyn Gerber walks past a homeless camp on the bank of the South Umpqua River in Gaddis Park recently.

Where do we start?

That question was posed by Roseburg Mayor Larry Rich to members of the city’s newly formed homeless commission Monday as they met in their ongoing effort to deal with the homeless situation.

The answer? Ask for help.

With a show of thumbs up during the Zoom meeting, the group agreed to ask Rogue Retreat, a nonprofit agency in Medford, to lend its expertise here in Roseburg. City officials visited Rogue Retreat operations this past summer and were impressed by what they saw. The program includes a step housing system for homeless people that includes a camp, a shelter and a village of tiny homes.

The idea is that individuals in the program, helped by a continuum of social services, progress up the housing ladder until they eventually move into their own homes. Rogue Retreat claims that 60% of its clients eventually make it to housing independence.

On Monday, several members of the homeless commission acknowledged that they have a lot to learn about the longstanding, complex issue of homelessness.

Commission member KC Bolton, CEO of Aviva Health, said he took a tour of a homeless encampment recently and it really opened his eyes.

“I need to get a lot more educated about the actual environment in these places, versus what I’ve read,” he said.

Brent Eichman, CEO of Umpqua Health Alliance, said he met with members of Rogue Retreat and also learned a lot. Eichman said he now understands that homeless people are not a homogeneous group, and that it’s important to meet them where they are and help them develop skills to live independently.

“It was a good conversation,” Eichman said.

The commission agreed to ask Rogue Retreat to conduct a needs analysis to help it develop a roadmap for developing shelter for unhoused people. Rich has said the commission’s mandate is to create so-called “low barrier” housing for them.

It’s difficult to ascertain how many homeless people there are in the area. One homeless advocate who does outreach twice a month said there are at least 150 people living along the bike path from Micelli Park to the Stewart Park duck pond alone.

A BUMPY STARTA January 2020 survey found 845 people in the county who were identified as unhoused, including 183 under the age of 18, but those numbers are considered low. The survey for this year was canceled due to concerns over the coronavirus.

The Roseburg City Council has made the issue of homelessness a top priority and spent much of 2020 holding special workshops to discuss the matter and come up with plans to address it. One of those plans called for setting up the homeless commission.

The commission got off to a bumpy start even before its first meeting. There were complaints leveled over how its members were chosen — they were picked by Rich, with no opportunity for the general public to apply or participate in the selection process.

Betsy Cunningham, chairman of Housing First Umpqua, said Rich violated city law by closing the selection process. Cunningham and several other residents also said they would have preferred someone who had experienced homelessness or is a homeless advocate to have at least been considered for a position on the commission.

Rich said he assembled the commission that way because it is new, and the council’s goal of providing housing for the homeless requires specific skill sets, including fundraising, among the members.

In addition to Bolton and Eichman, the commission consists of Gregory Brigham, CEO of Adapt; Shaun Pritchard, executive director of Umpqua Community Action Network; Shelley Briggs Loosley, board chair of the YMCA of Douglas County; and Mike Fieldman, legislative assistant for Rep. Gary Leif, R-Roseburg and former director of UCAN.

Rich is the commission chair.

The commission held its first meeting on Jan. 25, and announced that its immediate priority was setting up a warming center so the homeless could have somewhere to go this winter when the temperatures dip below freezing.

“We need it now,” Briggs Loosley said at the meeting. “We need to be ready to act as soon as possible.”

But eight days later the commission called a special meeting, and declared that the push to open a warming center was off, and the focus instead would be on helping the homeless shelter in place. Commission members said they had learned that setting up a warming center could take a month, and housing upwards of 80 individuals in a confined space could spread COVID-19.

Now the commission is working with local agencies to hand out tents, sleeping bags, food and other items to homeless individuals who are sleeping outdoors. Everyone is also hoping for warm weather.

"Now the commission is working with local agencies to hand out tents, sleeping bags, food and other items to homeless individuals who are sleeping outdoors. Everyone is also hoping for warm weather." - Do nothing's doing their best!

So when is the city homeless commission going to have their first cleanup event?

You can't bring these items to the riverbanks and leave them behind.