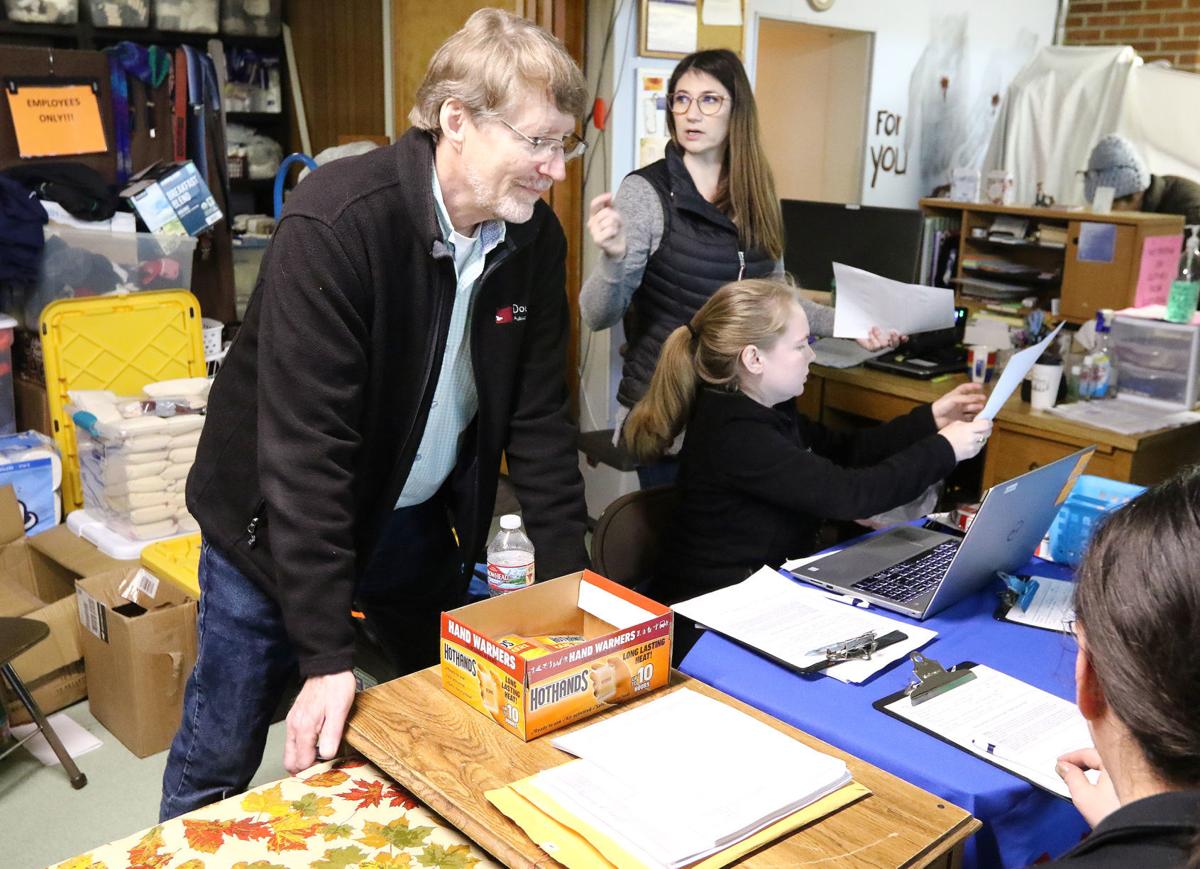 Brian Mahoney with the Douglas Public Health Network, left, Program Manager Christin Rutledge and epidemiologist Bailey Burkhalter register people for flu and hepatitis A vaccinations at the Dream Center in Roseburg on Wednesday. 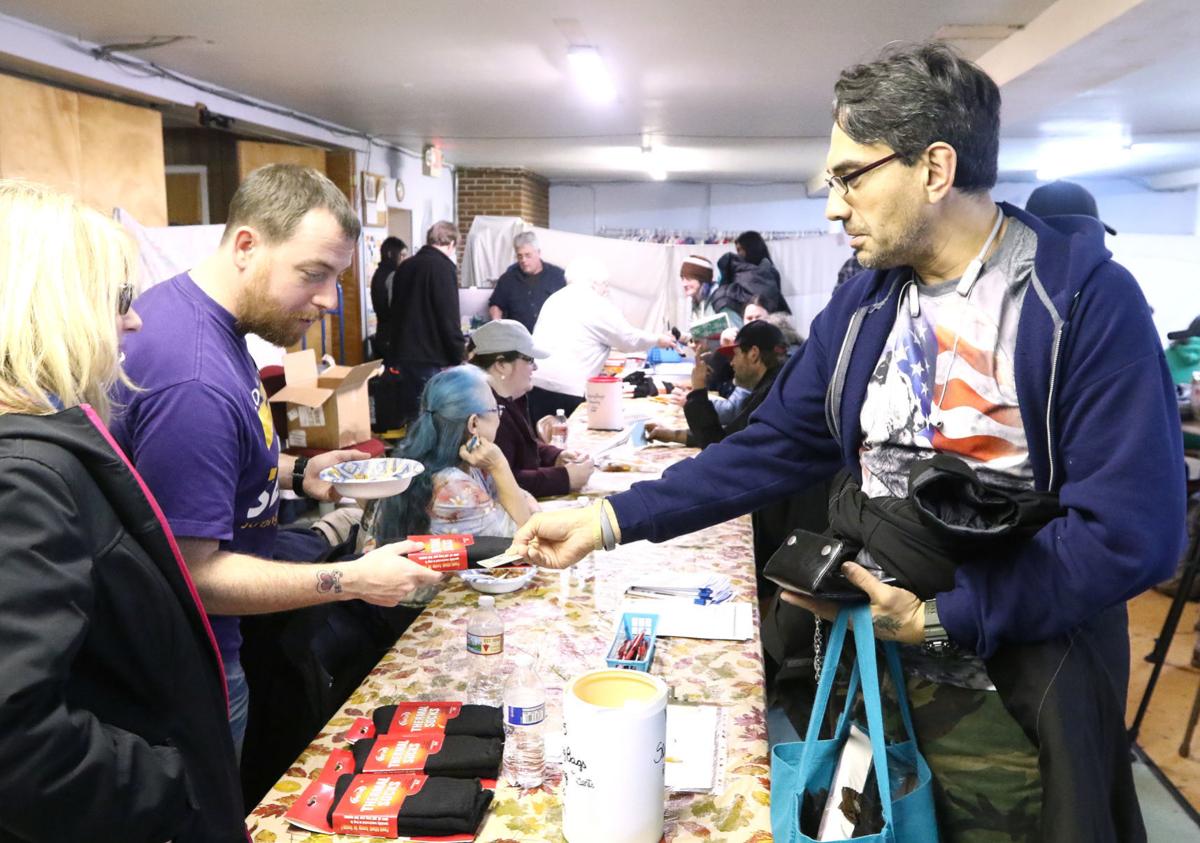 WorkSource Douglas Business and Employment Specialist Brandon VanBurger, left, speaks with Damian Kutbach during a Point in Time count at the Dream Center on Wednesday. 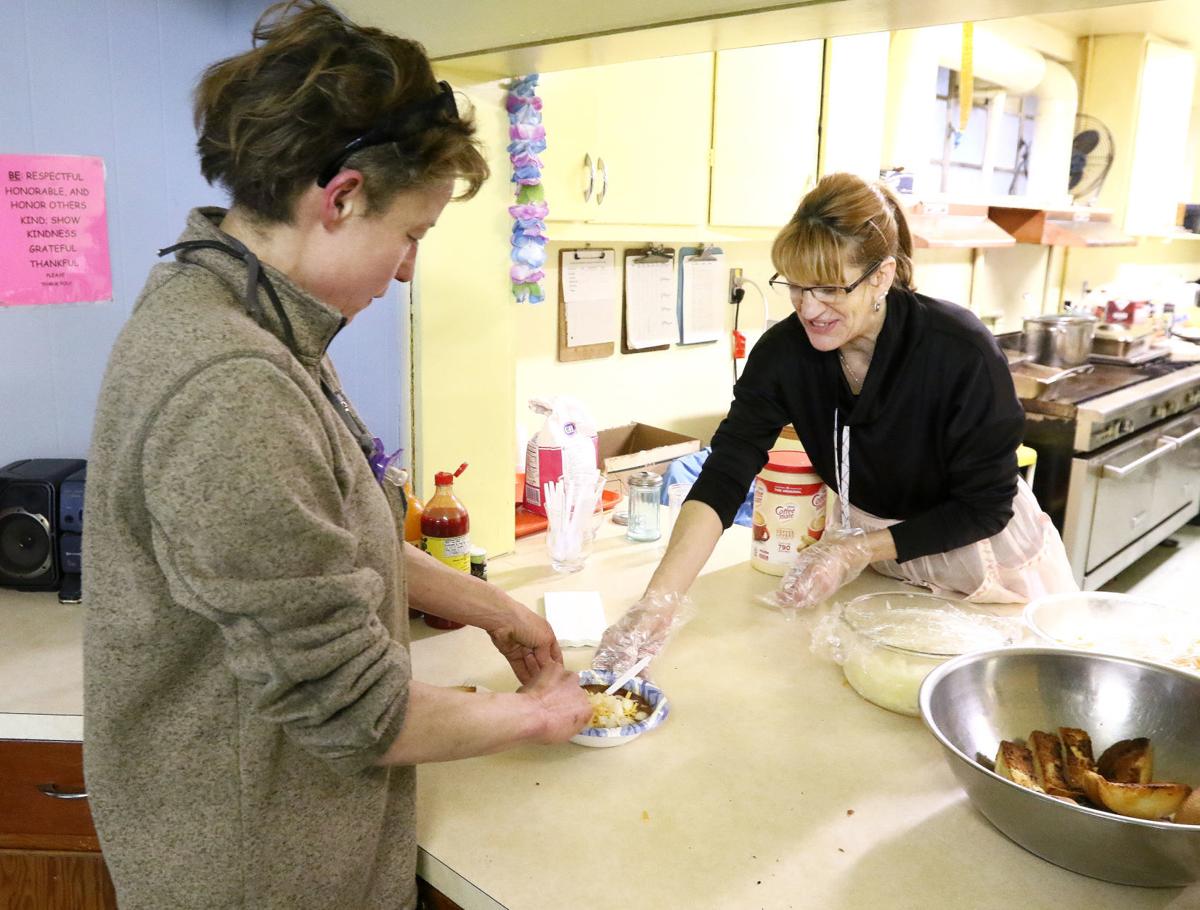 Volunteer Stefanie Taylor, right, serves a bowl of chili to Ava Standish during a Point in Time count at the Dream Center in Roseburg on Wednesday.

Brian Mahoney with the Douglas Public Health Network, left, Program Manager Christin Rutledge and epidemiologist Bailey Burkhalter register people for flu and hepatitis A vaccinations at the Dream Center in Roseburg on Wednesday.

WorkSource Douglas Business and Employment Specialist Brandon VanBurger, left, speaks with Damian Kutbach during a Point in Time count at the Dream Center on Wednesday.

Volunteer Stefanie Taylor, right, serves a bowl of chili to Ava Standish during a Point in Time count at the Dream Center in Roseburg on Wednesday.

Janis Marie Rose won’t be among those tallied in Wednesday’s Point in Time homeless count. It took place a week too late for her.

Rose, 41, was homeless for more than a decade and frequented the Roseburg Dream Center. Workers there say living on the streets and a drug addiction took a heavy toll on Rose, who often would nap under a table at the Center. Yet in quiet moments, they say, Rose would talk about her deep love for her teenage son and how she cherished the occasional visits from her mother.

Rose died last Tuesday. She was found under a bridge near the Denny’s Restaurant on West Harvard Avenue — the same Denny’s where Rose would meet her son to give him money from her monthly government check.

“It’s just a shame you can have people die on the streets of Roseburg,” said Tim Edmondson, director at the Dream Center, adding that Rose was the third client from the center to die in the past year.

On Wednesday, Edmondson spearheaded the annual homeless count and survey. The survey is important for a variety of reasons, including the information it provides about the local homeless community and its ties to potential funding.

The survey originates from the Department of Housing and Urban Development, and includes questions about veteran status, mental and physical disabilities, alcohol and drug abuse, HIV and AIDS, domestic violence, time without permanent housing and cause for leaving last living arrangement.

The survey is a combined effort between HUD and local organizations to get an estimate of the number of homeless people in the area, which then helps organizations requesting federal funding to help address the needs of the community.

The United Community Action Network was the lead agency for the Douglas County count. The Roseburg Dream Center, in the basement of the First Baptist Church at 813 SE Lane Ave., was the main location for the count.

One major focus was on high school students, Edmondson said, as advocates worked with officials at the schools to identify students who may be couch-surfing.

“We have a lot of high school kids in this area that really don’t have a home,” he said.

Advocates also went out into the community to identify areas where homeless people may be camping, sleeping in cars, or finding other temporary accommodations. The outreach teams then went back to those sites to include those people in the count, Edmondson said.

“Most of these people are just people in need,” he said. “They got down so low they just need help getting up.”

Last year’s count found 542 people in the county considered homeless, about evenly split between men and women. About 20% of those people were considered chronically homeless.

More than a dozen agencies were involved in the count, including the HIV Alliance, Wings of Love, Battered Persons Advocacy, Roseburg Rescue Mission, UCAN Head Start, Casa de Belen, Samaritan Inn and the Housing Authority of Douglas County. Several agencies had representatives providing services to people who participated, including WorkSource Douglas, the Department of Human Services and the Roseburg VA Medical Center.

A CONTENTIOUS ISSUEThe issue of homelessness has been at the forefront in the community and for government officials in Roseburg and Douglas County.

Last fall, Douglas County Commissioner Chris Boice was the driving force behind the installation of a small homeless shelter set up in September across from the Douglas County Courthouse. Boice said he had been inspired to put up the shelter after hearing complaints from county staff about homeless people sleeping, littering and defecating on the courthouse grounds.

The shelter included a carport, trash can, picnic table and portable toilet, and was billed as a pilot project to see if a larger campground might be created for the homeless. But the project put the county government at odds with the city government, which wasn’t enthusiastic about the idea.

The shelter was removed in early December after city officials said it violated zoning laws.

The Roseburg City Council recently settled on a half dozen goals to address over the next two years, and the issue of homelessness was identified as the top priority on the list. City officials are also working toward opening a sobering center as a way to address the large number of homeless who have repeated run-ins with law enforcement.

The issue has also caused a good deal of acrimony within city government. Several city councilors have expressed frustration over what they see as the slow pace of activity by the city on addressing homelessness.

And just this week, several members of the City Council criticized Councilor Ashley Hicks, who has been advocating for the city to look at setting up a homeless shelter on city-owned land north of the Roseburg Airport.

That effort prompted residents of a senior mobile home park near that city-owned land to call and send emails to city officials expressing their opposition to any such homeless shelter in their neighborhood. About a dozen of those residents attended Monday’s City Council meeting to further show their opposition to Hicks’ proposal.

Hicks’ public advocacy of the proposed homeless shelter — she has repeatedly posted on social media about the shelter — and the ensuing reaction of the mobile home park residents, prompted a backlash from others on the council.

Councilor Brian Prawitz suggested that Hicks be censured for her actions, and Mayor Larry Rich said he thought Hicks should not be allowed to travel on behalf of the city.

Rich and the council are mulling over what to do, if anything, to discipline Hicks for her social media comments.

At the Roseburg Dream Center on Wednesday, Edmondson and others had more immediate concerns to grapple with. From mid-morning to early afternoon the Center was a buzz of activity, with about 80 people taking part in the survey. They were fed biscuits and gravy for breakfast, and chili and potatoes, topped with cheese and onions, for lunch.

Center volunteer Sandie Petty was helping with the count when she took a moment to reflect on Janis Marie Rose. The two had grown close over the past year, with Petty picking out donated clothes to give to Rose and even lending her money, which Petty said Rose always paid back.

Petty said she remembers the last time she saw Rose, which was the last day of her life. Rose was hungry, so Petty drove her to McDonalds, where Rose had a strawberry shake. Petty said she still gets emotional when she thinks about Rose, her tortured life, her last moments.

“She was a lonely soul.”

I have said for years that people who cannot take care of themselves, need to be in a care facility. It is not kind to let them "be free" to be victims of crimes, the elements, etc. To me, it is not infringing on their rights to make sure they have food, shelter, medical and other needs met; but too many think it takes away their rights.

The City of Eugene's web page has a link describing their Opportunity Village for the homeless that has been operating successfully since 2012, see https://www.eugene-or.gov/3705/Opportunity-Village. Our County could establish one in the far corner of the fairgrounds property by I-5, and there is a walking path along I-5 back to Harvard. All that would have to be done is build the huts and a common building for washing laundry and bathing, then fence it. with community volunteers and agencies support. Many towns large and small pay the homeless to pick up trash using grant money they or other places like churches apply for to pay for it. It's a win win situation compared to what we have now. There are a lot of stories in the news about making it happen and getting grant money. Here is one from Newsweek https://www.newsweek.com/homeless-paid-clean-streets-texas-786311 There is no reason our city and county here can't do the same and start it now because its only going to get worse. If the county considered putting a motel out there years ago they should consider using a small portion for a homeless area now before our town in totally ruined by in influx of people living on the street. Or dying under the bridge as happened recently.

Anyone who believes that allowing homeless people to live on the streets is better for them and society than forceably removing them is only making the homeless situation in Roseburg WORSE.