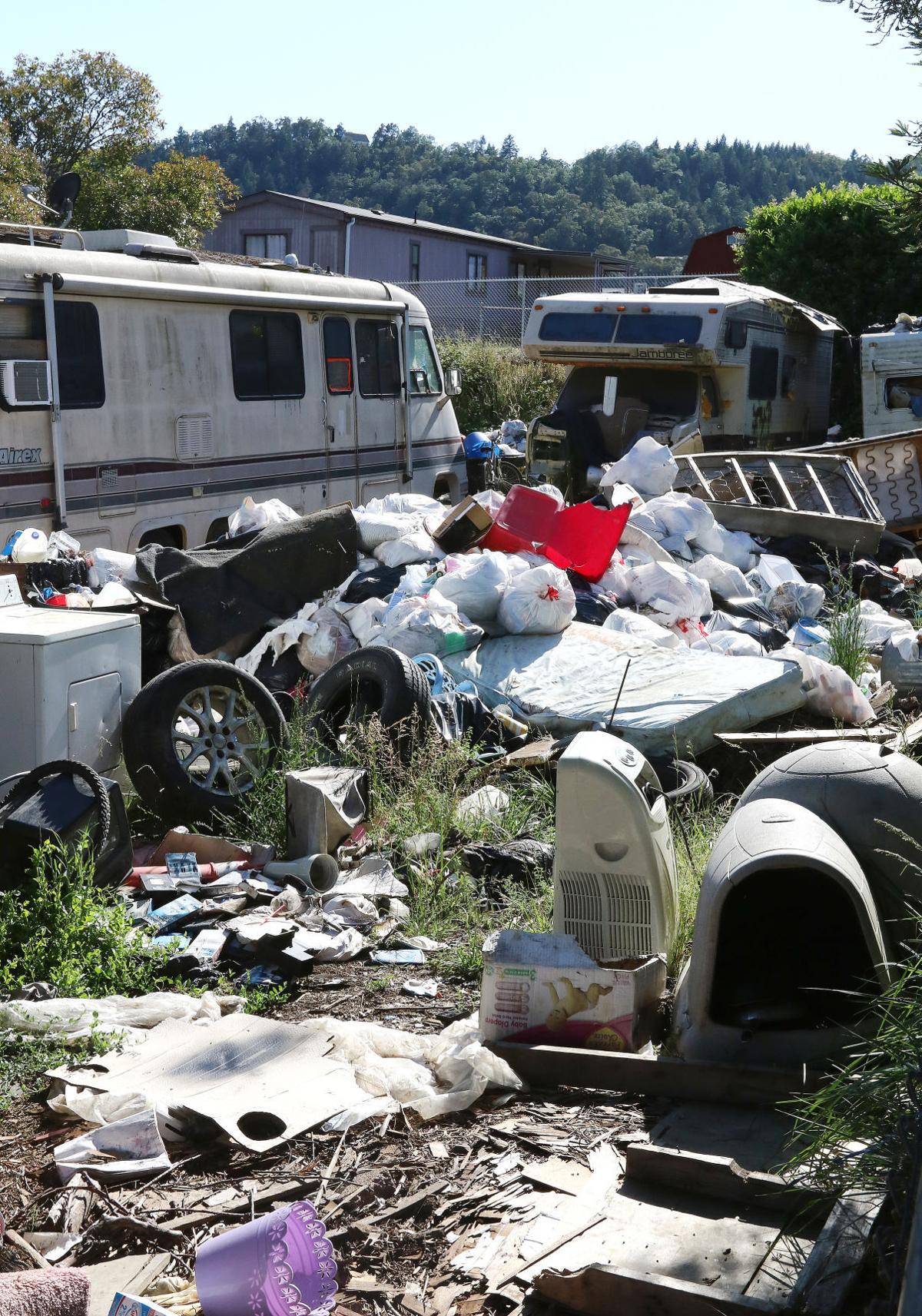 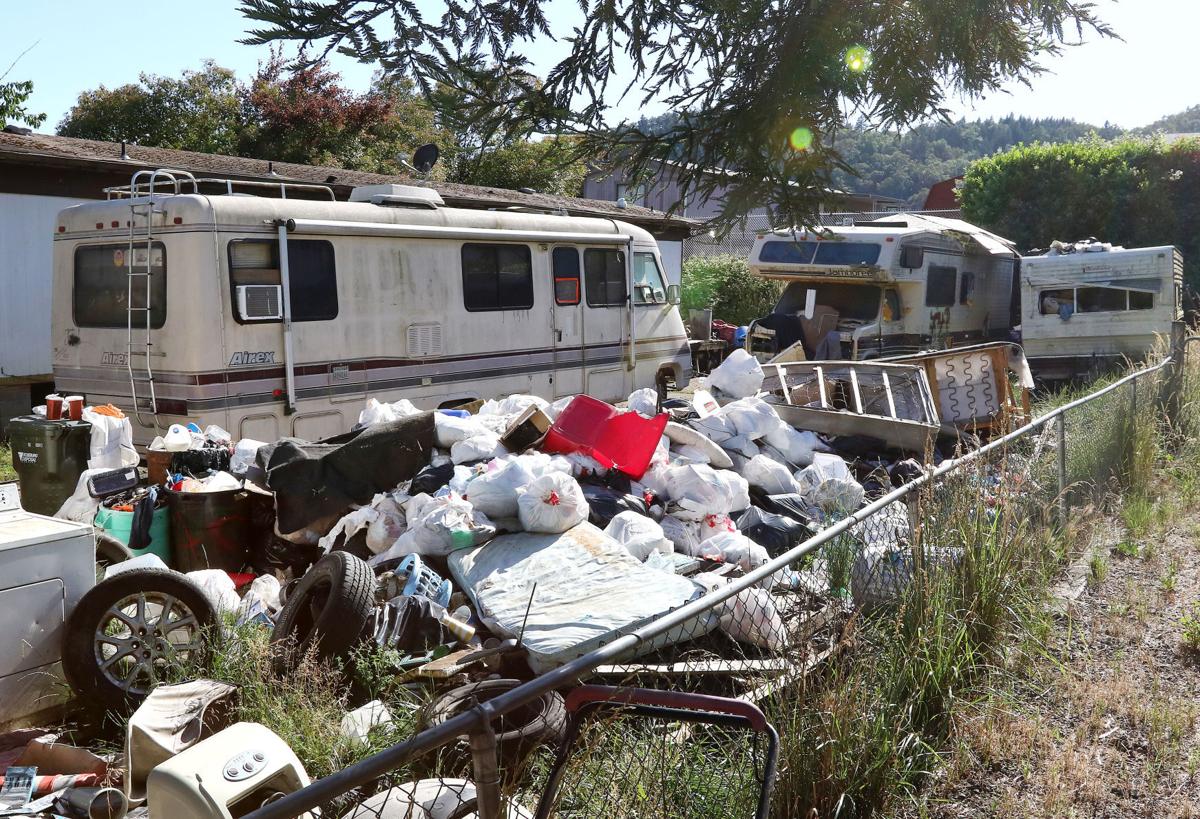 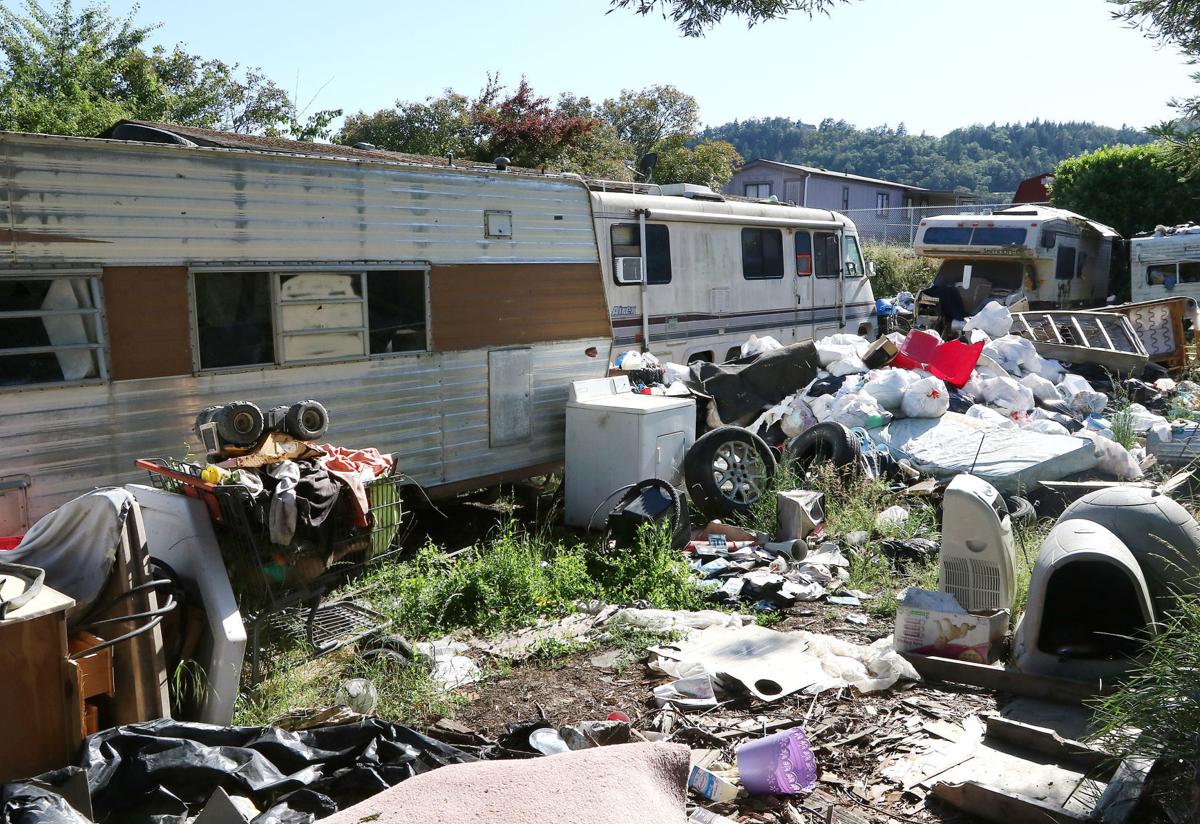 Discarded items piled up in the yard of a home at 3780 Joseph Street in Roseburg in this file photo taken in June. 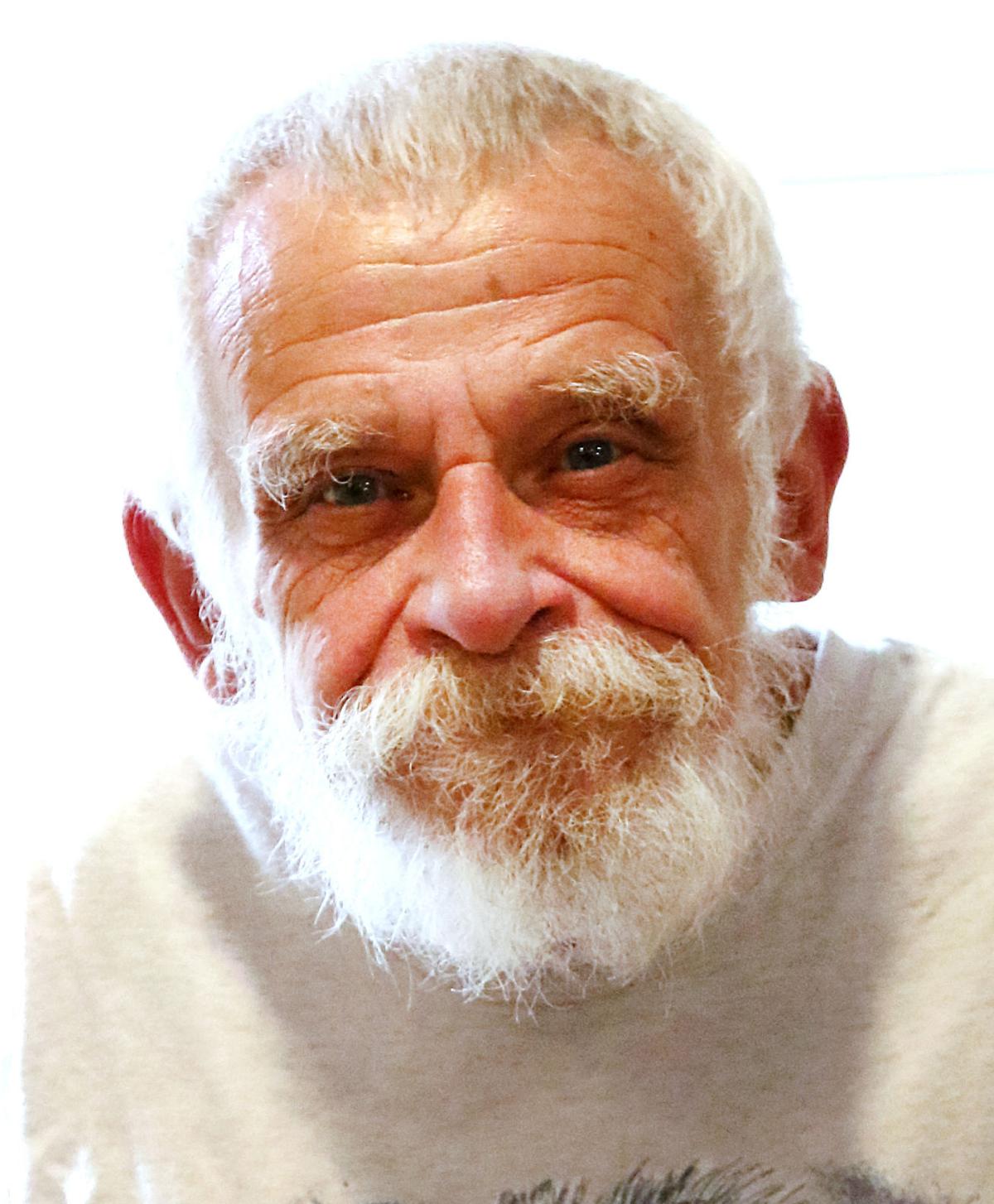 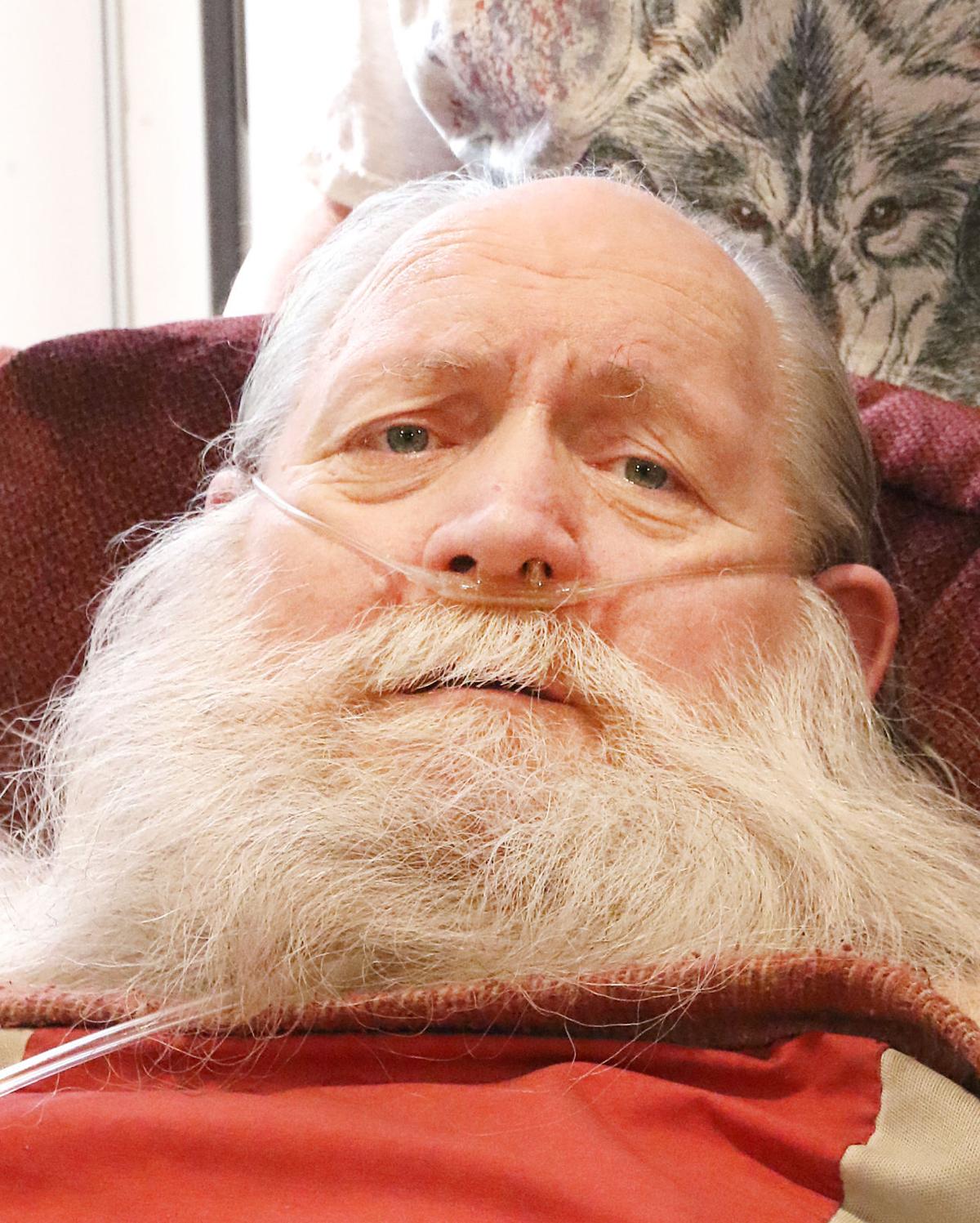 A view of the property at 3780 Joseph St. in North Roseburg before it received a cleanup.

A view of the property at 3780 Joseph St. in North Roseburg.

Some of the trash at 3780 Joseph St. in North Roseburg.

Discarded items piled up in the yard of a home at 3780 Joseph Street in Roseburg in this file photo taken in June.

A view of the property at 3780 Joseph St. in North Roseburg before it received a cleanup.

A view of the property at 3780 Joseph St. in North Roseburg.

Some of the trash at 3780 Joseph St. in North Roseburg.

Some of the neighbors are fed up with the mess at 3780 Joseph Street in North Roseburg.

They say the property has garbage piled up outside and several campers where people seem to be living.

Roger LaBranche, a retired nurse, has lived in the neighborhood since 1979 and Jim Marshall, a retired school maintenance technician, moved in during the 1990s. The couple married five years ago, and said the problems at 3780 Joseph Street started about three and a half years ago.

They have begun to feel, Marshall said, like they live across the street from an annex of the dump.

“Right now you can see mice running around in various places,” LaBranche said.

“And the smell that comes from over there,” Marshall added.

“The roses covered it for a while, but there’s kind of this under smell underneath the roses going on,” LaBranche said.

Dennis Grissom, a UPS driver who lives next door to 3780 Joseph Street, said there are three motor homes and two camp trailers on the property and it’s hard to tell who’s living there at any one time.

The garbage is waist high and 30 feet long and it stinks, Grissom said.

“They just walk out of the motor home and throw their garbage out,” he said.

The city of Roseburg and Douglas County governments have identified the property as a nuisance and are taking steps to remedy the situation.

Nuisance properties take a while to clear up, but this one involves an extra challenge due to its location, said Douglas County Commissioner Tom Kress.

It’s on a block that feels like it’s part of the city but isn’t. It’s outside city limits but inside the city’s urban growth boundary. That means part of the problem has to be addressed by the city, and part by the county.

The jurisdictional issues are so complex, in fact, that the city and county governments have signed a special intergovernmental agreement, or IGA, to deal specifically with the issues at 3780 Joseph.

“We’re all working together trying to get it done,” Kress said.

The county will take charge of getting rid of the trash, after which the city will arrange for the campers to be towed to the county landfill.

The county will then have to break down the campers and dispose of the parts. The Freon and some of the metals have to be separated out because they can’t just be deposited into the landfill.

The campers can’t be pulled out of there until the trash is cleared, but they need to be removed soon afterward because if they aren’t the trash will likely pile up again, he said.

The property is in an area zoned for light industrial, though the residential neighborhood is grandfathered in. Having one unoccupied camper parked next to a home is OK on such a property, but having several occupied campers violates the zoning laws.

“They’re essentially using the property as a campground,” he said.

The complaint said the property “has the appearance of an open air garbage dump.”

According to court documents, the court found in the county’s favor and ordered the Jordans to clean up the mess.

When the property didn’t get cleaned up as the court ordered, Steven Jordan was charged with contempt of court. A hearing in that case is scheduled for June 28.

Kress said unfortunately this isn’t the only property creating a similar level of nuisance in the county.

“I’ve been working on those fairly aggressively ever since I got here,” said Kress, who was elected in 2018. “There’s quite a few of them and it’s quite a process to get them cleaned up.”

One memorable property, on the site of a former Curtin store, caused the neighbors quite a bit of distress before the county was able to get an order to go onto the property and clean it up, he said.

Closer to Roseburg, the county is attempting to address a nuisance property owned by a person with a hoarding disorder, Kress said.

Kress explained the hope with these kinds of properties is that owners will take action to fix the problem.

“If we can get everybody in compliance, in other words, not an eyesore for everybody and not a health hazard, then that’s the real goal,” he said.

But that doesn’t always happen.

In some cases, property owners have disappeared or even sold the property after the county has brought a nuisance claim against them, creating extra hassles.

There appears to be an end in sight for the troubles on Joseph Street.

For Marshall and LaBranche, though, it feels like an unbearable wait.

“We haven’t slept normal in gosh I don’t know how long,” LaBranche said.

Both are in their 70s and have health issues.

“Really we should only be concerned with that, but instead we’ve got this mess over there to contend with too,” LaBranche said.

Grissom is sick of it too.

“It’s embarrassing to come home, it’s disgusting and I get to smell the garbage,” he said.

Kress said he feels bad for the neighbors.

“Nobody should have to live under that kind of shadow,” he said.

Taking out the trash: Messy property on Joseph Street gets a cleanup

On Monday, the garbage piled up between campers at 3780 Joseph St. was 30 feet long, waist high, and it smelled.

So if Ive read this correctly. KRES has since 2018 has Cleaned up 1 other nuisance property. As he proclaims He's on this.? Another example of the Poor Quality of Elected Officials here in Douglas County.

I pick up 5th wheels and travel trailers

Rv...let me know...I repair and fix them

There's a bunch of houses in green that need cleaned up. A whole trailer park needs bulldozed in my opinion. LOL

A heads up to the neighbors. When the cleanup starts, all those rats, mice and rodents are headed to your house. That's right, they'll all need a new home.

lol... A bright note to cheer the neighborhood up, eh. Yay!, they're cleaning it up - ohhhhh. WalMart will sell out of traps. Or: https://www.acehardware.com/departments/lawn-and-garden/insect-and-animal-control/animal-traps/7766181?store=15837&gclid=EAIaIQobChMI_eDI-Nef8QIVufvjBx0suQZ2EAQYBSABEgJLlPD_BwE&gclsrc=aw.ds

Where or who do we contact at the county level to raise awareness of other properties needing actions? I see one glaring example on Carnes Rd. in Green that needs attention.