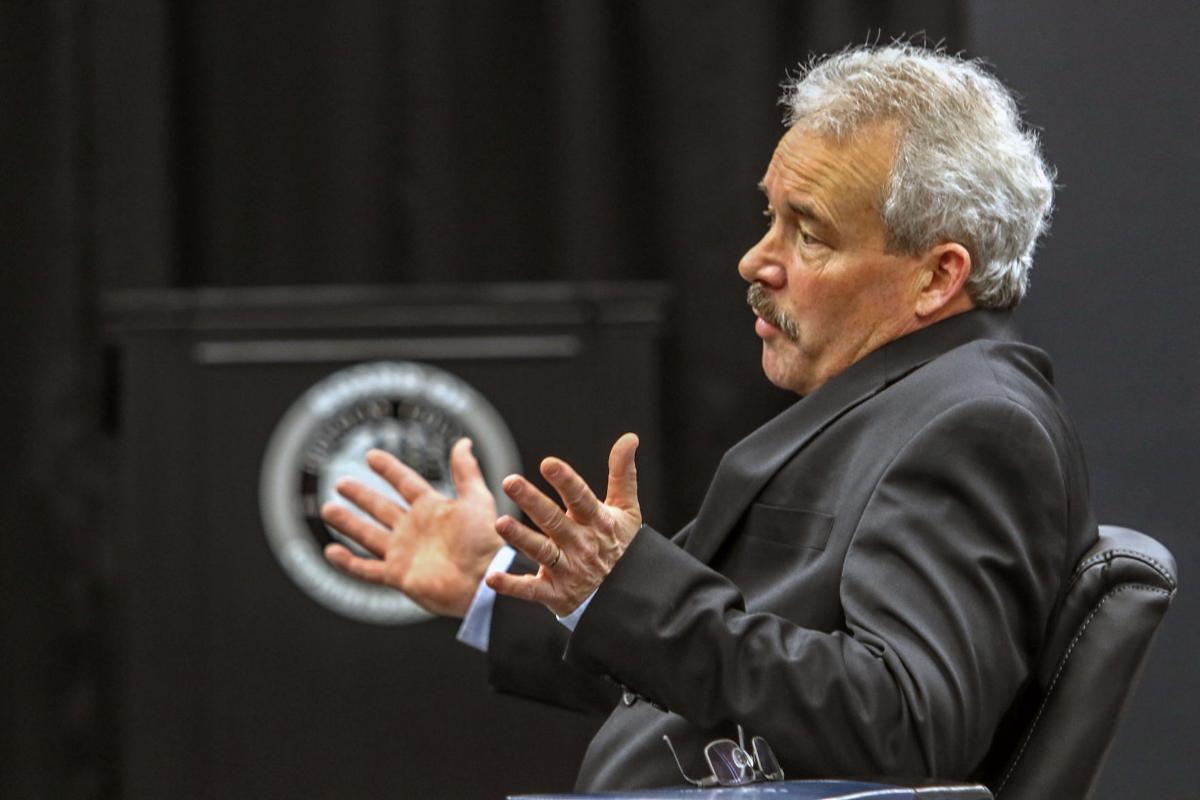 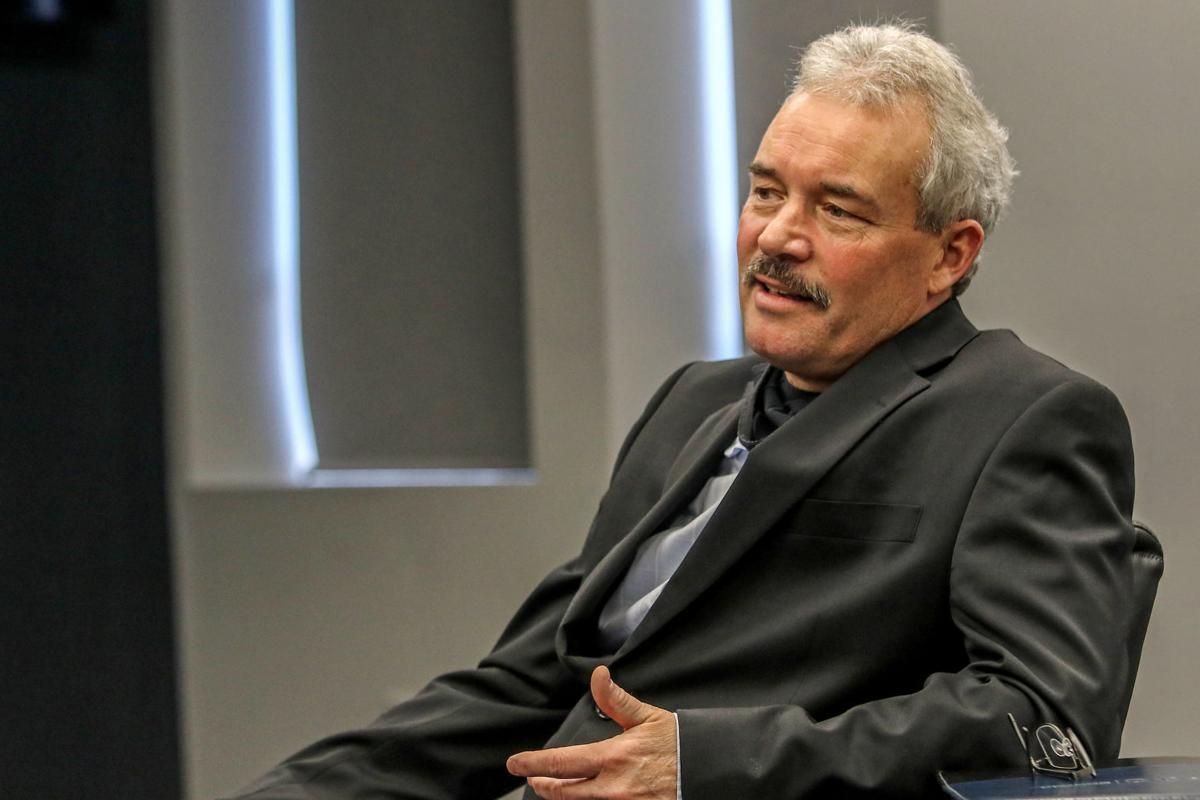 Douglas County Commissioner Tom Kress answers questions in the Douglas County Courthouse earlier this week. Kress is perhaps the least known of the three county commisssioners — and he likes it that way. 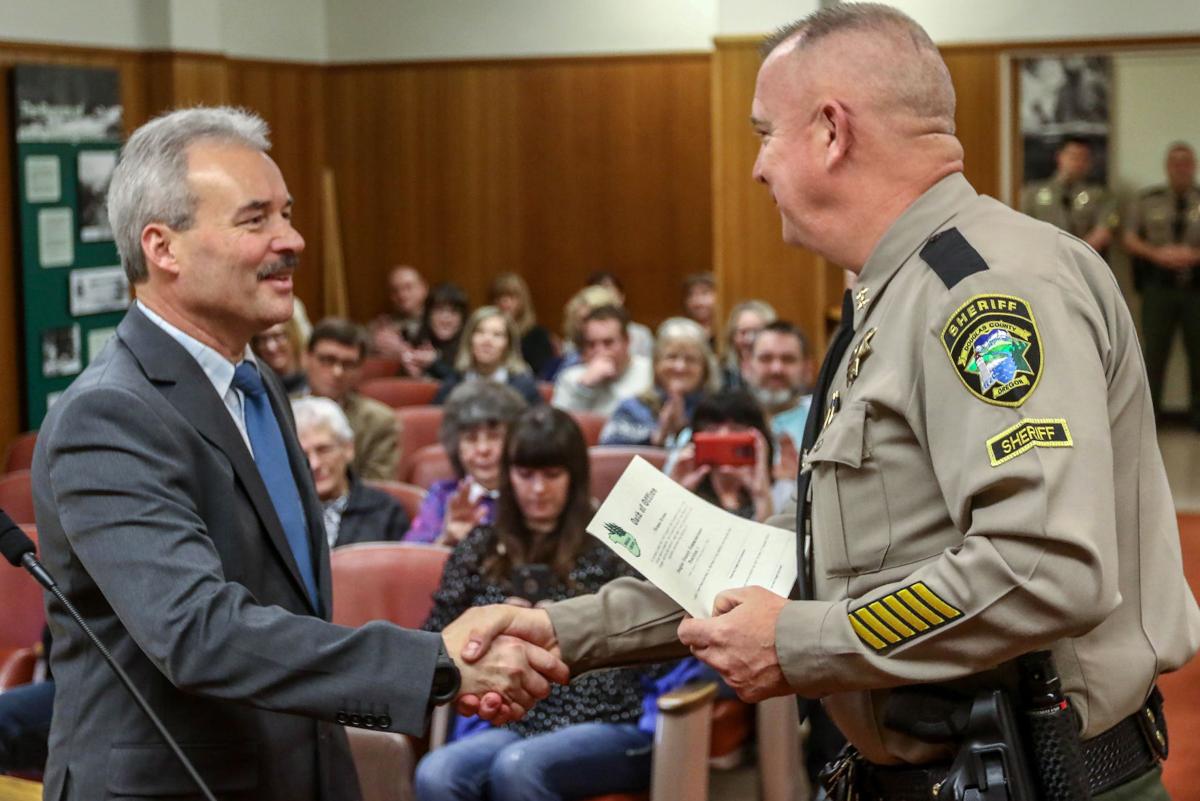 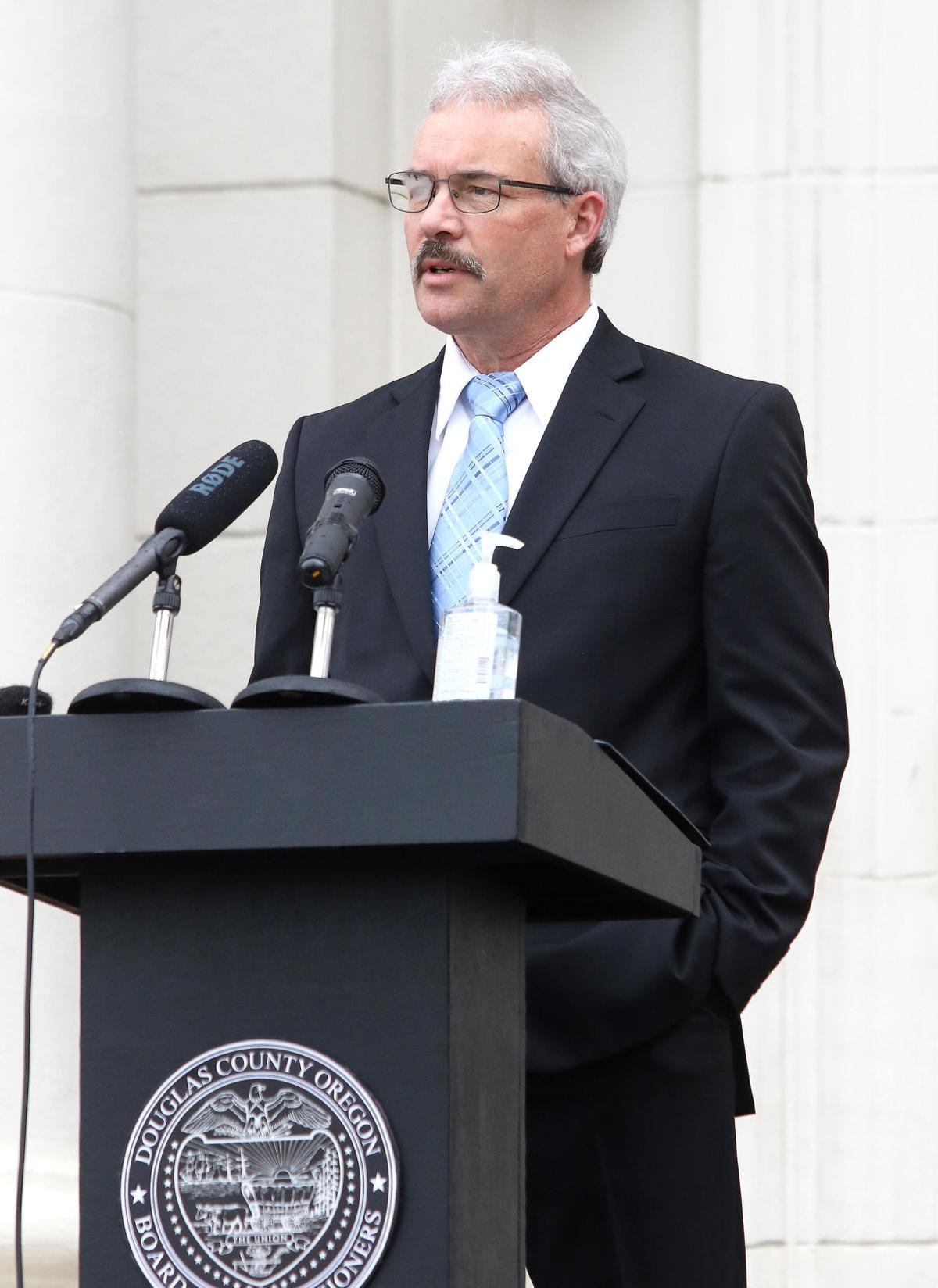 Douglas County Commissioner Tom Kress answers questions in the Douglas County Courthouse earlier this week. Kress is perhaps the least known of the three county commisssioners — and he likes it that way.

Tom Kress, chosen this month to chair the Douglas County Board of Commissioners, is perhaps the least known of the three county commissioners.

And he likes it that way.

“I’m pretty comfortable being behind the scenes,” he said.

Kress is the owner of Waldron’s Outdoor Sports in Roseburg. He joined the commission in 2019, filling the spot that Gary Leif had held before being chosen to represent House District 2 in the state Legislature.

Since he’s been in office, the county has faced three emergencies — the “snowmageddon” storm of 2019, the Archie Creek Fire and COVID-19 — but county spokesperson Tamara Howell said Kress has remained a calm and steady presence at the Douglas County Courthouse.

While the other commissioners have specialized in more visible — and sometimes controversial — issues like timber laws, COVID-19 response and economic development, Kress has preferred to focus on two areas with which he has lots of experience: money management and customer service.

Kress grew up in Roseburg and said he’s lived and worked in Douglas County for nearly all his life. He married a local woman, Sasha Kress, who is from Glide. They were married in the courtyard of the courthouse by then-county clerk Doris Wadsworth and raised three kids in town. Two have become foresters, and one is a nurse.

After attending the University of Oregon, he returned home and worked with his father Leonard Kress at the family’s auto parts store, Kress Backen Auto Supply, until 2000. By that time, it had become a seven-store chain and they sold it to the Carquest Auto Parts corporation.

For a year, Kress and his family moved to Georgetown, Kentucky to work for Carquest’s Lexington, Kentucky office as a finance director.

But Kress worried that if his kids would graduate there they’d want to remain.

So he and family friends, John and David Backen, who had also been partners in the auto parts store, purchased Waldron’s Outdoor Sports in 2001 and the Kress family returned home.

Kress said he likes having an outdoor sports business even more than the auto parts business because it’s still working retail, which he enjoys, and because he loves outdoor sports like hiking, biking, canoeing, kayaking and archery.

“Sporting goods is all about making somebody’s adventure better,” he said.

He said it was his love for Douglas County that drew him to the commissioner position.

He could see that the county was in financial trouble and thought he could help.

“I actually like working with numbers and Excel spreadsheets and financial statements. I take a pretty deep dive into everybody’s budget and we get right down to the weeds,” he said.

Kress oversees the solid waste department, which has dealt with shifting Department of Enviromental Quality requirements that can have big budget impacts.

Landfill closing costs of the future, for example, have to be saved for today. An administrative rule change midstream this fiscal year changed the county’s mandatory annual contribution from $450,000 to $1.2 million.

“That’s a horrible hit to us,” Kress said.

Kress is also overseeing a number of improvement projects, including financing major capital expenses for a landfill leachate treatment facility and stormwater runoff projects. And he’s worked to bring glass and can recycling back.

“The financial cliff that this county was looking at a few years ago, while it still looms there our glide slope is much flatter than it was,” he said.

With his business background, Kress said he’s focused on the idea that the county can provide good customer service.

After more than 100 homes were destroyed by the Archie Creek Fire, Kress asked staff members to research ahead of time and be ready for the planning permits and reassessments that would inevitably follow, for example.

But even on ordinary days, people coming in seeking planning permits or other assistance from the county should be valued and treated like customers, he said.

“I think the staff has really warmed up to that. I think people naturally want to be that way. They want to be friendly,” he said.

“My motto in our departments is how do we say yes, yes we can do that,” he said.

Kress is the only commissioner you could call a successful businessman. Didn't file for bankruptcy when he could have, didn't make a living gouging unsuspecting freeway travelers stopping for gas. Not shooting off his mouth to get attention. Clearly the smartest of these three commissioners.

Mr. Kress, you need to be the one who monitors and/or leads the new Homeless Commission. Producing homeless bodies is not good customer service. It needs to be addressed immediately.

If its necessary for a County Commissioner to straighten out a County's finances, what does that say about the County's Finance Department dedicated and paid to do exactly that?

Wow. You are such a condescending twit whenever it has anything to do with the Commissioners. I've given up on responding to your repeated lies, half-truths, and crazy COVID theories. You clearly have more time on your hand to proffer your hate disguised as citizen concern than I do to respond. The County's finance department has received numerous recognitions by third party auditing teams for its excellence. If you had bothered to read the article, you would see that Kress was referring to declining revenue streams and increased fiscal burdens due to changing regulatory requirements. None of those things have to do with the quality of work performed or the expertise in the County's finance department. I guess your insults are now extending beyond the Board and to the County workforce as well.

NJ, are you afraid of the truth, like Mike? Another conspiracy theorist, maybe?? I applaud the clarity and detailed explanation by Ghost. Sure beats Mikes nonsense.

You and your constant name calling. If you had bothered to read the article, you would see Kress said, “I actually like working with numbers and Excel spreadsheets and financial statements. I take a pretty deep dive into EVERYBODY'S budget and we get right down to the weeds.”

How does the quote you cite state or even imply that Kress is straightening out the County's finances because the finance department isn't doing their job? Its just one more in a long line of crazy assumptions based on a biased and blind hate. You are your own version of a QAnon conspiracy theorist. Also, for someone who dishes out a lot of vitriol - you sure have some thin skin.