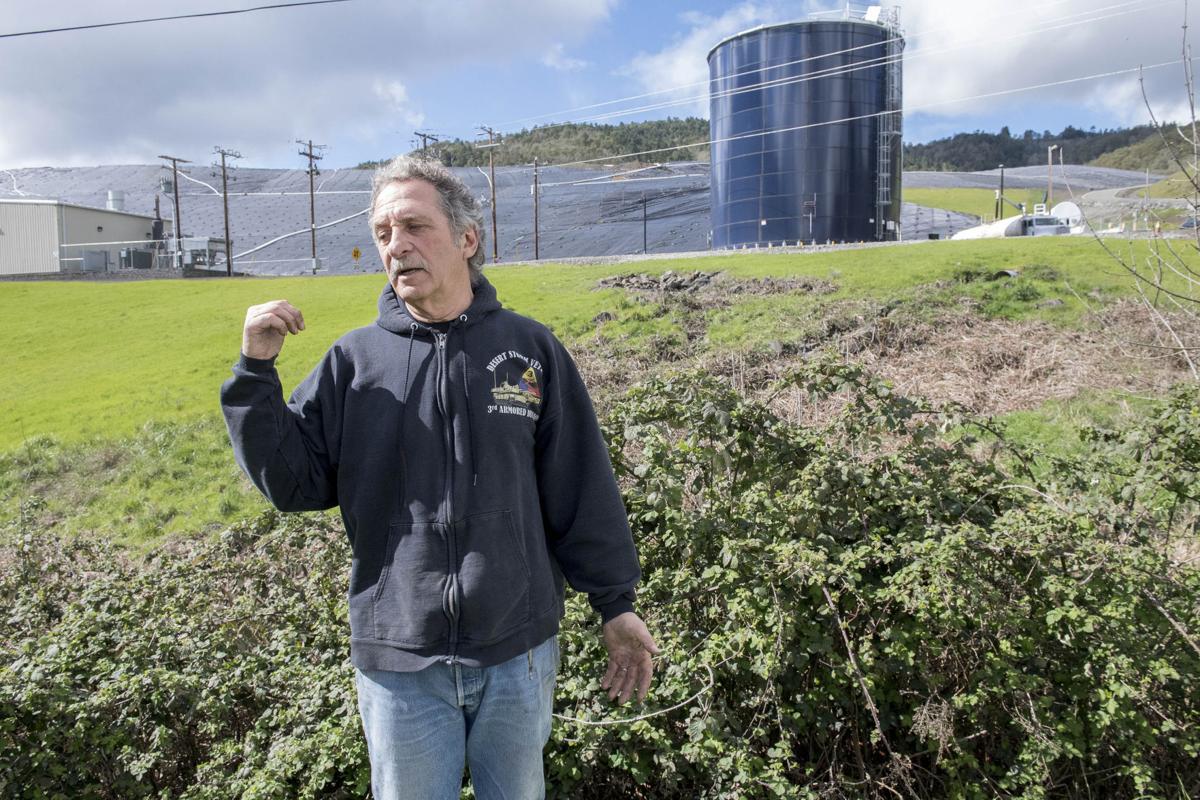 Victor Petrucci stands on his property with the Douglas County landfill behind him. Petrucci alleged leachate from the landfill leaks onto his property during heavy rains. 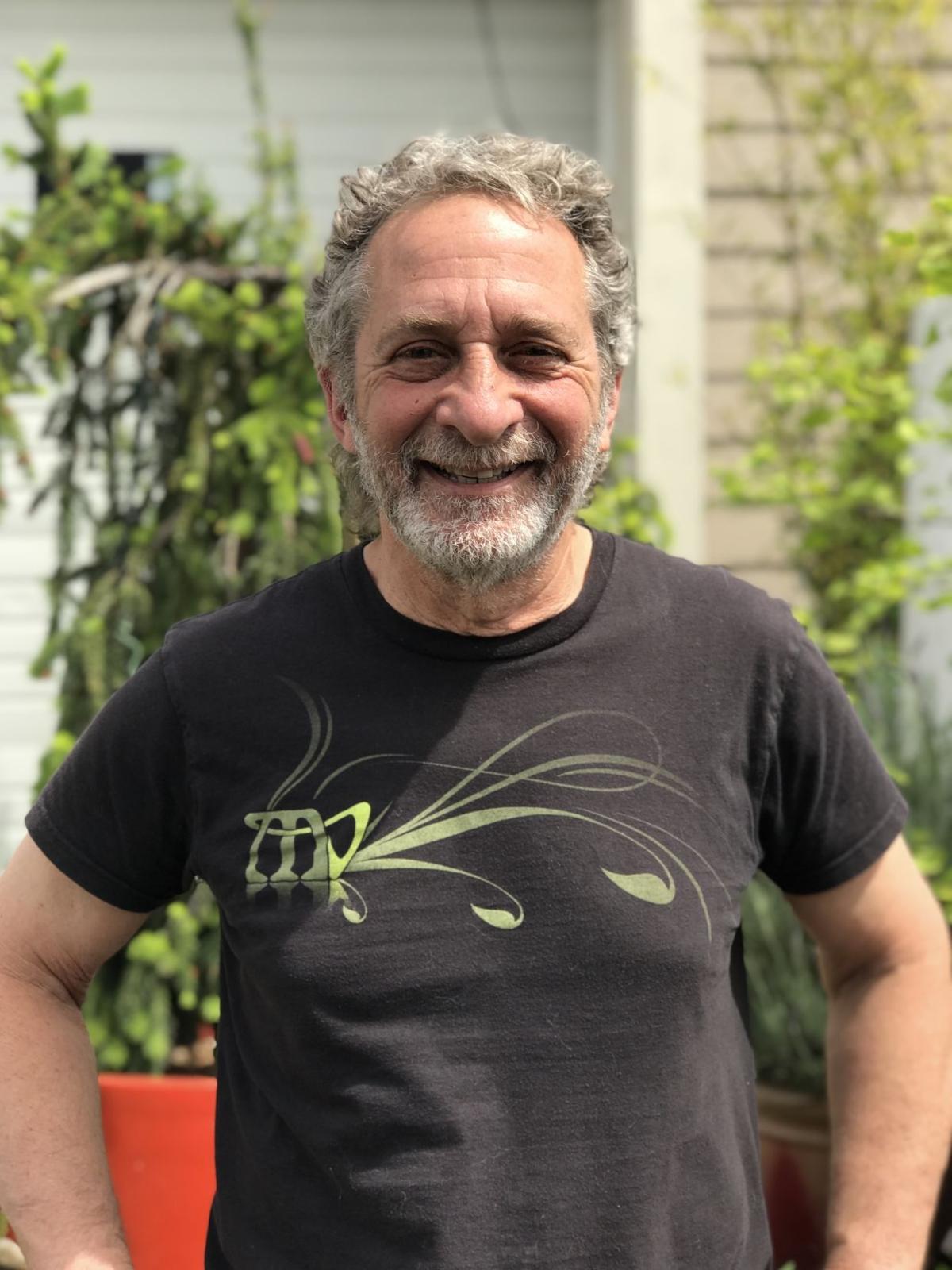 Victor Petrucci’s business Monster Vintage is selling the property to the county for $309,000, according to county documents. Last week the Douglas County commissioners delegated the authority to Commissioner Tom Kress to sign closing documents and have a check cut.

Petrucci’s earlier battle with the county involved his allegation that leachate was escaping the landfill and pouring into a creek that runs through his property.

County officials said there had been a leachate leak in March 2017 following the failure of a pump during heavy rains, but the problem was quickly corrected. A DEQ investigator visited the site twice in April 2018 and found no evidence of ongoing leachate spillage.

During the course of the dispute, Petrucci was charged with burglary, illegal interception of communications and second-degree criminal mischief for allegedly damaging an air conditioner at the county’s solid waste department office and placing a listening device to illegally record conversations of county employees. He had argued he was acting in the public interest. Petrucci was also charged with trespassing on county property in a separate incident.

Ultimately Petrucci negotiated a plea bargain, pleading guilty to second-degree burglary, and the other charges were all dropped.

Petrucci also made an unsuccessful bid in 2018 for the county commissioner seat held by Tim Freeman.

Petrucci did not return calls seeking comment about the sale of his property.

The piece of property Petrucci is selling to the county sits right in the middle of two pieces of county-owned property, one holding the Douglas County Landfill and the other holding the transfer station where customers drop off their trash.

“Strategically, considering the type of operation that we have up there, it makes sense for us to manage our neighboring property,” Douglas County Commissioner Chris Boice said Tuesday.

“We have the transfer station down below and the landfill up above and then this awkward different land ownership in between,” he said.

Boice said the piece the county’s buying will be useful for two future projects.

The first will be a leachate pretreatment facility.

Boice said the county hopes to build a facility that makes leachate not just compliant with regulations, but better than what’s required.

“It’s going to make it easier on the wastewater treatment plants that we use in order to treat the leachate that comes out,” he said.

The Douglas County Public Works Department has already begun working with engineers on that project.

The second future project will be to create a staging area for collecting and transporting trash to be hauled to out-of-county sites.

One day, the landfill will be full and have to be closed down. At that point, the county will likely begin hauling trash brought to the transfer stations to landfills in other counties.

Some private trash hauling companies already take some of the garbage they collect to landfills in other counties.

When they do, they pay a fee to the county to help cover the eventual cost of the Douglas County Landfill’s closure.

Boice said there’s room on the site they’re buying from Petrucci for both projects.

Petrucci has had the land up for sale for a couple of years. Boice said the price was high, but the property was worth it to the county so it could control the entire area rather than having a neighbor own one piece in the middle of the other two.

“I wish we could have paid a little bit less, but real estate prices are what they are right now, and we paid a lot less than he had it listed for, so that’s good,” Boice said.

Don't you love the idea of transporting our solid waste to other counties? You know all the costs will trickle down to US.

Good for the county. Landfill leachate is a monster problem.

The Commissioners are in a tough spot, caught between international and national failures to design products for full life cycles, and rapacious consumers with little sense of personal responsibility or desire not to foul our nest. (And who would, some at least, just as soon burn mattresses in the woods.) I'm going to make a dump/recycling run today; I expect to see in the bins an empire of thoughtlessness.