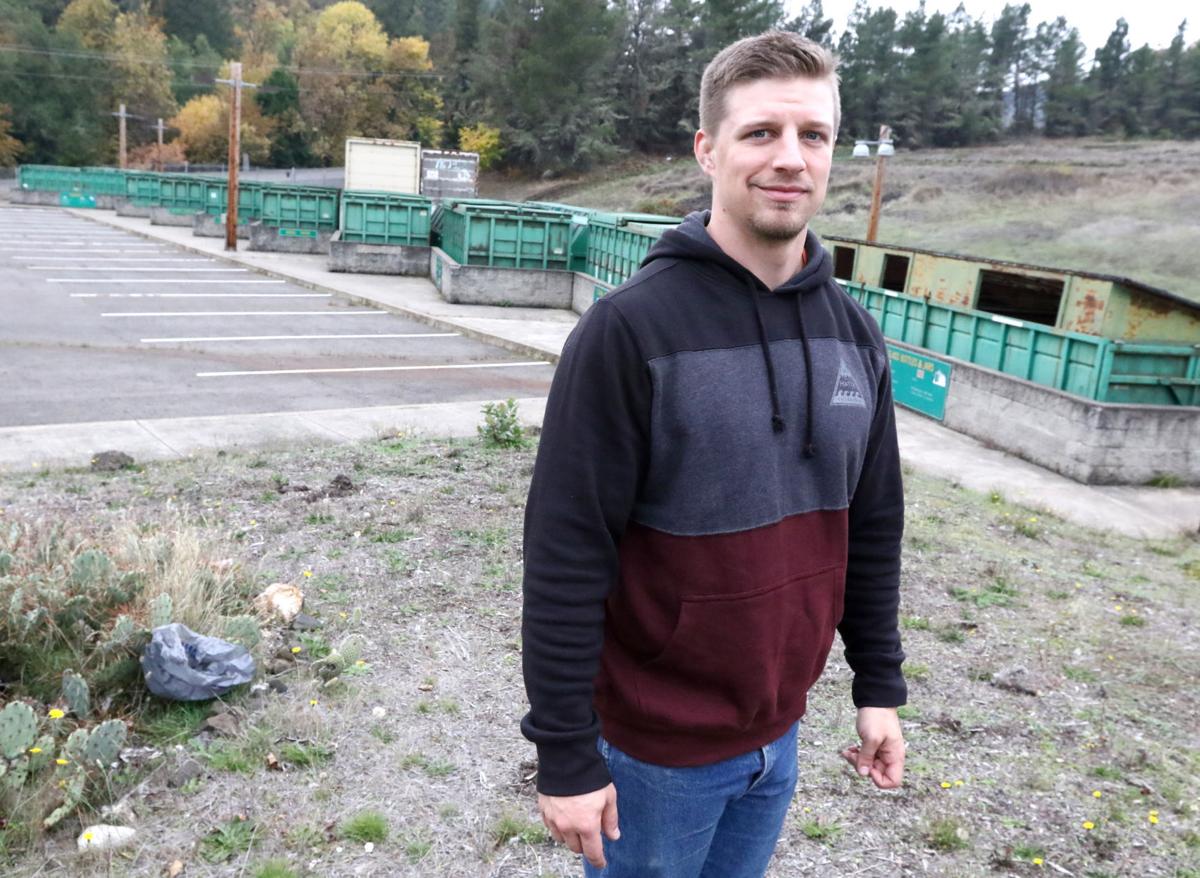 Douglas County Solid Waste Manager Gabe Forrester appears in this file photo from 2019. The county has begun recycling glass and other materials, free of charge.

Douglas County has now returned to glass recycling, with bins designed to take bottles and jars.

Douglas County Solid Waste Manager Gabe Forrester appears in this file photo from 2019. The county has begun recycling glass and other materials, free of charge.

Douglas County has now returned to glass recycling, with bins designed to take bottles and jars.

The bulk of the county’s recycling program, like most across the region, came to a sudden halt in May 2018. That’s when China, the major market for West Coast recycling programs, stopped taking in America’s trash. It cited problems caused by the dirty plastic recyclables that Americans kept sending them.

The county doesn’t have a solution yet for plastics but it has found one for glass.

Douglas County Solid Waste Manager Gabe Forrester said the glass is being repurposed by the solid waste department itself.

The glass is crushed at the landfill and then used as an aggregate substitute. The crushed glass is a good substitute for gravel as a filtration layer for the vaults that collect landfill leachate, the liquid that seeps to the bottom of landfills. The glass will help remove heavy metals and sludge before the leachate is shipped out for treatment.

The crushed glass is also being used as a foundation layer underneath roads and when constructing ditches and dikes.

Forrester said he heard about similar re-purposing programs in Italy and Germany and then found it was being done in some American solid waste programs as well.

The Roseburg transfer station next to the Douglas County landfill is taking glass recyclables now, as are the county’s transfer stations at Reedsport, Myrtle Creek, Oakland, Glide, Yoncalla and Canyonville.

The recycling bins are designed for depositing bottles or jars one at a time through holes sized for those items. The recyclables should be clean and free of caps or metal lids. They should not be placed into the bins in plastic bags.

The recycling service is free of charge.

Forrester said recycling is a huge part of the solid waste industry that needs to be brought up to par.

“That’s my number one focus right now is source separating materials and finding better ways to dispose of them, environmentally safe ways,” he said.

The new glass recycling program will save some landfill space, but it’s not the biggest problem, Forrester said.

“Glass is a small portion of the landfill. Most of it is plastics, which is the big recycle business that went away with China not taking recyclables any more,” he said.

Forrester said plastics recycling remains a tough one to solve. He anticipates the next successful recycling comeback will be with cardboard.

He said what he needs next is a facility where the cardboard can be baled.

The cardboard would likely be hauled to Eugene and then recycled into more cardboard boxing or paper products.

Forrester also said he wants to work on recycling food waste, another big filler in the landfill that could be repurposed for local agriculture.

Glass isn’t the only material you can recycle at the landfill now, though. The county’s still accepting tin and aluminum cans, scrap metal, oil and batteries.

Forrester said he believes members of the public want to recycle more. The county just needs to figure out how to facilitate it. As the county began phasing in the new glass recycling program over the past month, he said he’s received thank you letters and phone calls from county residents, and even been stopped on the street.

“It’s pretty good feedback and they’re excited to see what’s going to come in the future as well,” he said.

It would be most useful if, when articles were updated, that notes to that effect be posted at the end of the article. It would be particularly helpful in cases such as this, where the changes are critical to the public's understanding and decisions.

Paper/no paper labels might be a go/no go inflection point for most people.

Problem labels. We fill the kitchen sink with hot, soapy water and use it to wash down the counter tops. stove, fridge, microwave, cupboards, etc. Then if I have any pans or dishes that need soaking to release gunk, I put them in the same water with all my empty jars and bottles with paper labels. After a soak, the gunk releases and the labels come right off. It takes only a few minutes to remove most labels that way. There are a few products that stick labels on with super adhesive, but about 90 percent come right off. If the glass still looks grubby, it goes in the dishwasher with other dishes and comes out clean. Many labels will release if you just put hot water in the jar or bottle and wait a few minutes to unloosen the adhesive. It's only a few minutes extra work.

China's refusal to take American Plastic was a Direct Result of that orange dudes Tariff BS. Which never got resolved. Along with everything else he put his hands on.

China announced on August 16th 2017 that it would be banning 24 kinds of solid waste. On March 22nd 2018 President Trump signed a memorandum instructing the United States Trade Representative to apply tariffs to $50 Billion of Chinese goods. Your statement that the Chinese import ban was because of Trump's tariffs is impossible because Trump didn't introduce tariffs until after China banned solid waste imports. Therefore your statement earned Four Pinocchios! [beam] P.S. Why do y'all always have to bring up skin color? "I have a dream that my four little children will one day live in a nation where they will not be judged by the color of their skin, but by the content of their character."

On January 23, 2017, three days after becoming president, Trump introduced his economic strategy of "putting America first" by withdrawing the United States from the Trans-Pacific Partnership and threatened tariffs on goods from all countries. It wasn't until January 23, 2018, that Trump announced 30% tariffs on solar panels and 20% tariffs on wash machines supplied by China. On March 1, 2018, Trump announced 25% tariff on steel and a 10% tariff on aluminum imports. In a tweet the next day, Trump asserted, "Trade wars are good, and easy to win."

On March 23, 2018, The United States asked China not to implement a ban on imports of scrap materials. The dispute over scrap came amid increased concerns of a full-blown trade war between the United States and China. This came the same day Trump signed a memorandum targeting up to $60 billion in Chinese goods with additional tariffs.

Sparked by an impending trade war, China announced their first reductions in recyle material imports in 2017, halting the import of four categories of solid waste, including scrap plastics. By mid-2018, in response to the trade war, China said that it would stop companies from importing solid waste (unrecyclable, often toxic and hazardous waste) by December 2020. Claiming Trump’s trade war with China had nothing to do with China’s 2020 ban on recycle imports is simplistic.

Mike, thanks for doing the research on that. I knew Willie's info wasn't correct, but didn't have the time to fact-check right then, so [thumbup] to you.

Willie, you get 4 Michelle Obama-style Side Eyes for trivial MLK reference on first day of BHM in order to defend chronically bad orange make-up job.

In two filings registered with the World Trade Organization on Tuesday, China signaled its intent to forbid 24 kinds of solid wastes by the end of 2017.

It proposes adoption of the measures effective September 1st, 2017.

“By the end of 2017, China will forbid the import of 4 classes, 24 kinds of solid wastes, including plastics waste from living sources, vanadium slag, unsorted waste paper and waste textile materials,” according to one of the filings.

Mike you are quoting a post hoc fallacy which states that since event Y followed event X, event Y must have been caused by event X.

This is according to the actual WTO filing. Now if you believe Reuters and Forbes are more accurate then the WTO and the WTO misinterpreted the filing they received directly from China then let me know and I'll update my books...

Willie, I am perfectly happy to have Trump judged by the content of his character.

When they say "no paper," does that mean no paper labels on the jar or bottle? If so, 90% of my glass will continue going to the dump.

Mike: understood (see my earlier comment). What I can do, if that is what it means, is that I could leave the glass in a seasonally wet ditch beside the house, and peel off labels. It still is a nuisance and is a barrier to responsible behavior.

Does that mean there is a "requirement" to remove labels. I haven't read that anywhere yet.

Occasionally I run into a cellophane-like label that is glued onto the glass so hard it won't soak off. Those go into the landfill. Otherwise, when I have dishwater in the sink I plop glass jars in and leave them till the labels soak loose.

Where does it say no paper?

Awe I see, someone made a mistake and have since edited the article.

I don't understand Douglas County's problem with glass. Last month I went to Medford and dropped off all the glass I didn't want to throw in the dump for a long time. I had no problem with the glass being taken. It wasn't even at a transfer site. why did Jackson County have a plan and site for glass but Douglas County didn't?

smedleyb: as I understand it, Eugene never stopped recycling glass, and a friend here took a load of my glass north a few months ago, and said they were actually paying a dime a piece for non-deposit containers. They were also accepting plastic. Right now, I have about a cubic yard of each ready to recycle when I can. There was also recycling of slick (magazine) paper, other paper, and cardboard in Sutherlin a few months ago.

As far as I know, this info is not available on Douglas County e-gov website

I'm glad for this. But the requirement to remove labels is a huge barrier; it's costly in terms of water and time. Is the paper (and sometimes a bit plasticizer) really a problem? It would be nice to get answers here, so each of us needn't call.