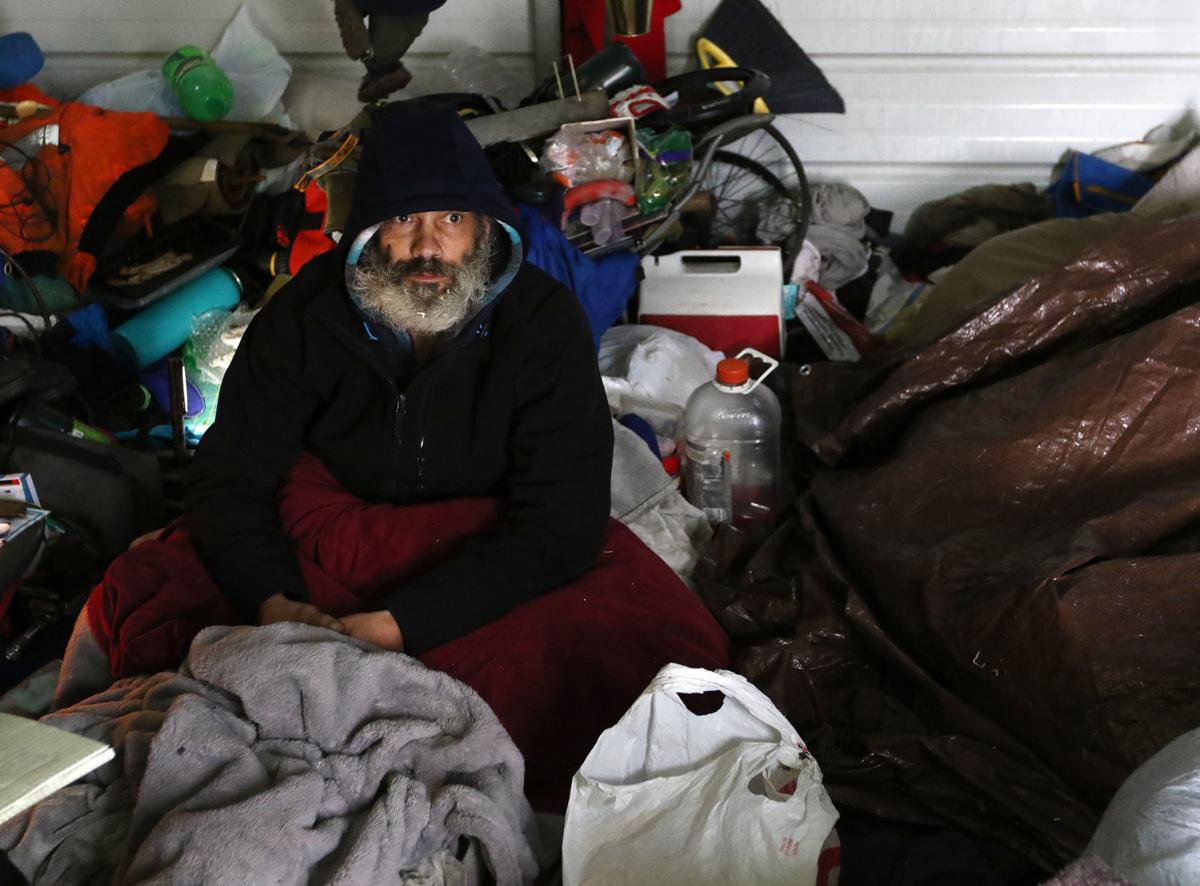 Martin Solinger utilizes a shelter area set up on Southeast Fowler Street near the Roseburg Public Library on Wednesday. The shelter will be removed on Dec. 2. 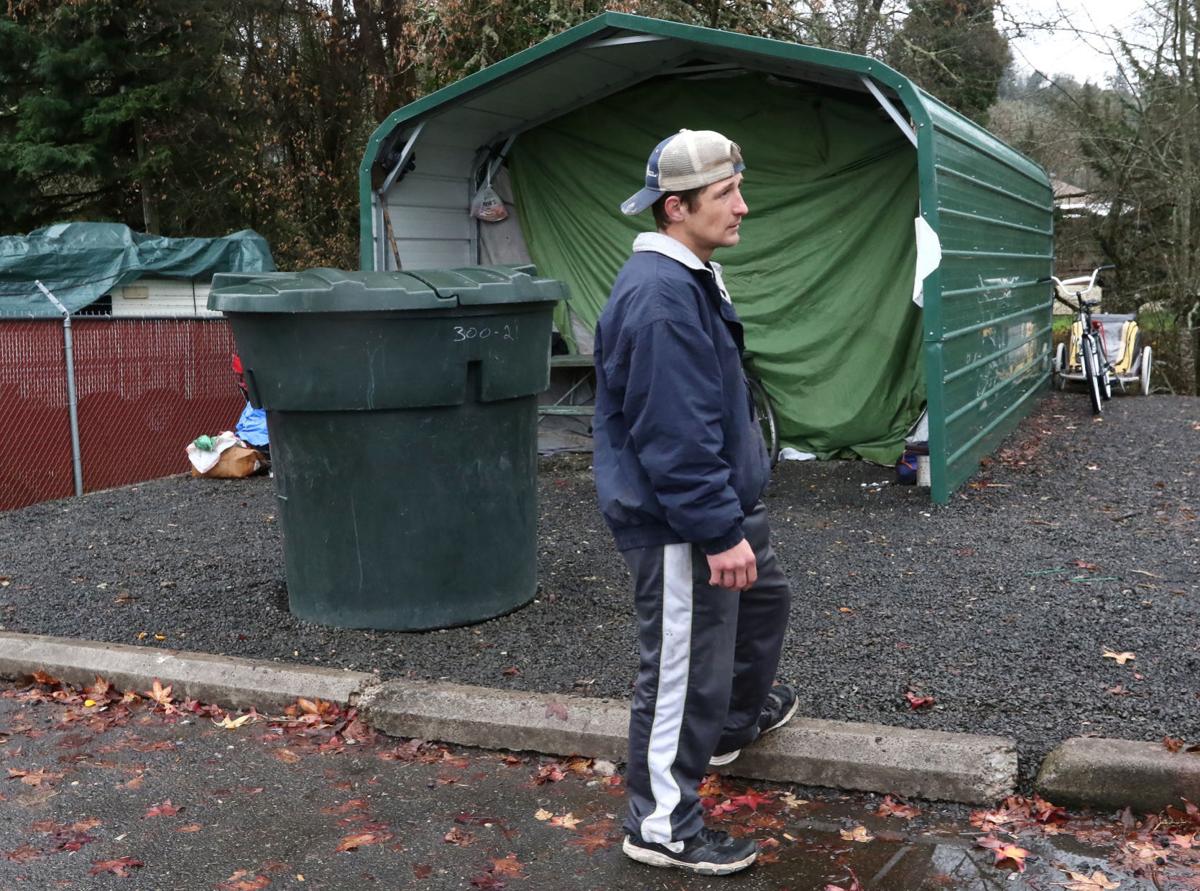 Jeremy Harmon stops by a shelter area set up on Southeast Fowler Street near the Roseburg Public Library to visit friends. The shelter will be removed on Dec. 2.

Martin Solinger utilizes a shelter area set up on Southeast Fowler Street near the Roseburg Public Library on Wednesday. The shelter will be removed on Dec. 2.

Jeremy Harmon stops by a shelter area set up on Southeast Fowler Street near the Roseburg Public Library to visit friends. The shelter will be removed on Dec. 2.

Homeless men and women huddled together for warmth inside sleeping bags underneath the carport shelter across from the Douglas County Courthouse Wednesday afternoon. They were packed together so tightly and burrowed in so deep it was hard to determine an exact number.

It was 39 degrees. Overnight, the temperature had dropped below freezing.

For many, the week of Thanksgiving is a time of warmth and abundance. For these folks, it’s the time they were given notice to clear off. Monday the shelter will be taken down.

Martin Solinger, a homeless man who’s been staying there, said the news they would be kicked out right after Thanksgiving weekend was disappointing.

“They were bummed out, but what can we do,” he said.

The decision came after county officials, who had put up the shelter, determined the city wasn’t going to allow them a permit to keep it there, according to Douglas County Commissioner Chris Boice.

He was motivated to set up the shelter in September because homeless people had been sleeping and defecating on the courthouse premises.

The shelter solved those problems, but the city had a problem with campers sleeping there. Police frequently visited the shelter and ticketed campers there for sleeping. Boice said the county didn’t need a permit to put up a rain shelter, but when people began sleeping and camping there a permit was sought. After determining that no such permit would be forthcoming, the county decided it will remove the shelter, he said. Shelter residents were notified last Monday.

Solinger was sitting on the floor of the shelter, the only one upright when a reporter arrived. He has emerged as an informal leader for those who have stayed at the shelter over the past three months.

He’s originally from Coos Bay but moved to Roseburg a year ago. He has been homeless for eight years, and he was kicked out of the Roseburg Rescue Mission so his options are limited.

Solinger said he’ll have no choice but to go back to camping outside somewhere. He said he’s not too surprised.

“I didn’t figure it was going to last very long,” he said.

Solinger thinks part of the reason the shelter’s being pulled down is because of the clutter that’s accumulated there. But he thinks that’s natural considering that around a dozen people have been staying there.

“This many people in one area is going to be a lot of stuff obviously,” he said.

He said he stepped up to take care of the place, which made it difficult to do the job search he’d planned to do this fall.

“Sitting here taking care of this place I didn’t have a lot of time to look for work. There were things I needed to do and nobody else stepped up,” he said.

Jeremy Harmon said he hasn’t been staying at the shelter but he’s homeless too and he has friends there. He had planned to help them put up some insulation to keep the place warmer before learning that it was going to be taken down. Harmon has lived in Roseburg most of his life but said there’s nowhere for people like him to stay.

“I thought where are they going to go. If we have to move out of town it doesn’t make sense. It’s like we’re being exiled,” he said.

Alexis, who asked that we not use her last name, was buried deep under a sleeping bag but emerged to talk about her situation. She was also born and raised in Roseburg and said she had her own house and a nice car until two months ago when she lost her job.

She said she has a tent but she doesn’t know where she’ll go next. She won’t go to Samaritan Inn because she can’t bring her dog there.

She said people are usually more generous this time of year. Not this time.

“They don’t usually take things away from you at the holidays. It’s kind of a crappy time to do that. You’d think they’d leave it up until it’s warmer and then figure out something else to do,” she said.

State to send fewer inmates to Douglas County Jail, a move that could slash jail budget by $1 million and put more criminals on the streets

People have the right to live the lives they live. However...if you''re living your life on the streets, bumming money, committing crime, defecating and urinating on the public streets and sidewalks...YOU ARE A MENACE TO YOURSELF AND THE PUBLIC. The public should not have to endure such safety hazards. Time to commit the homeless to those facilities which can best help them and prevent them from returning to the streets.

What do you mean...”not sure what to do?”?? You’ll get your act together...quit the drugs and alcohol... and make better life choices. Get a job and be productive. It’s as simple as that!! The choice is your...quit being a burden on society and more importantly...on yourself. 😉

Those who are born or raised here could be provided for if government would provide the bus ticket and a reasonable resettlement fee to ship the others back to California, New York, and the places which provided them the bus ticket to come here.

“They were bummed out..." How appropriate a phrase. Time to get the bums off the streets of Roseburg. They are both a public health and a public safety problem.

I think that if everyone went and shat on the court house steps and the city hall steps just 1 day a month.... I BET that they would find a solution to the homeless problem asap.... for the first time ever I agreed with a boice decision and I will give him credit for least boice tried.... I will give him that.... but for larry rich and the city council to not give out or expedite a permit for this structure is 1000% abondmanol in so many ways!

I guess our city hall and county building deserves all the shiiiiot it gets. 💯