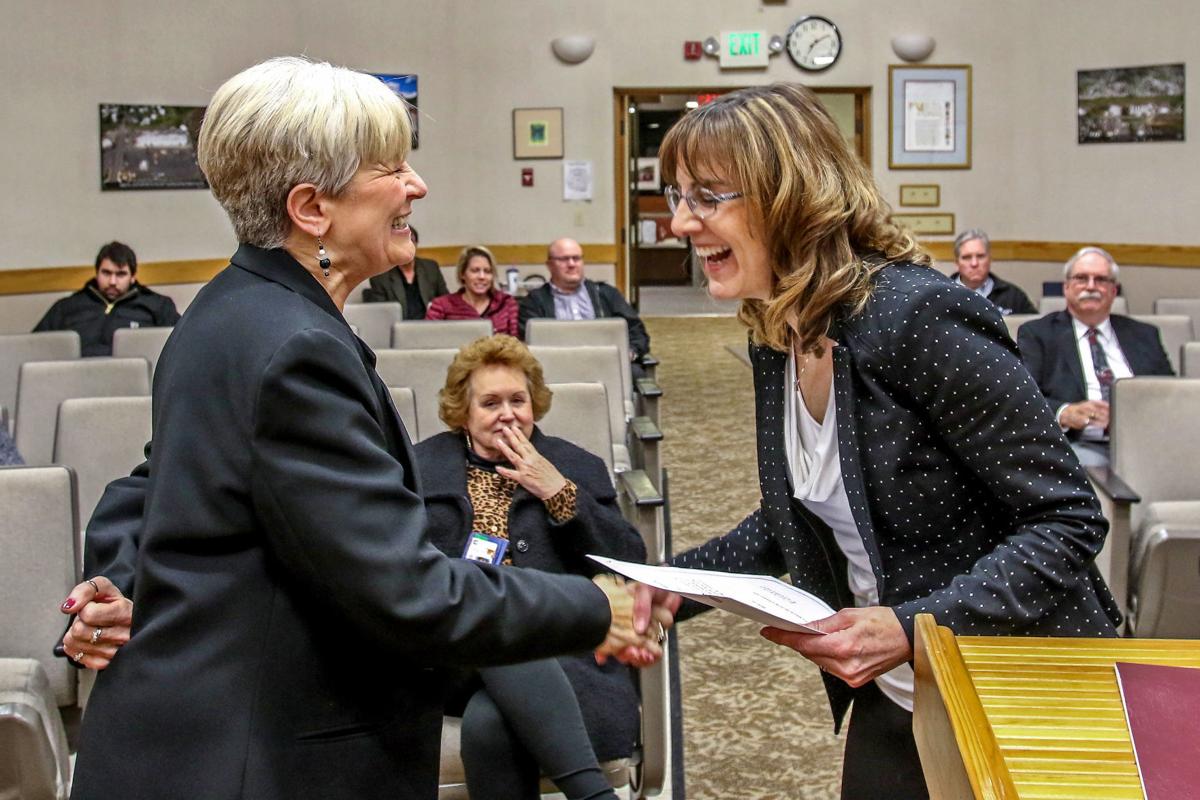 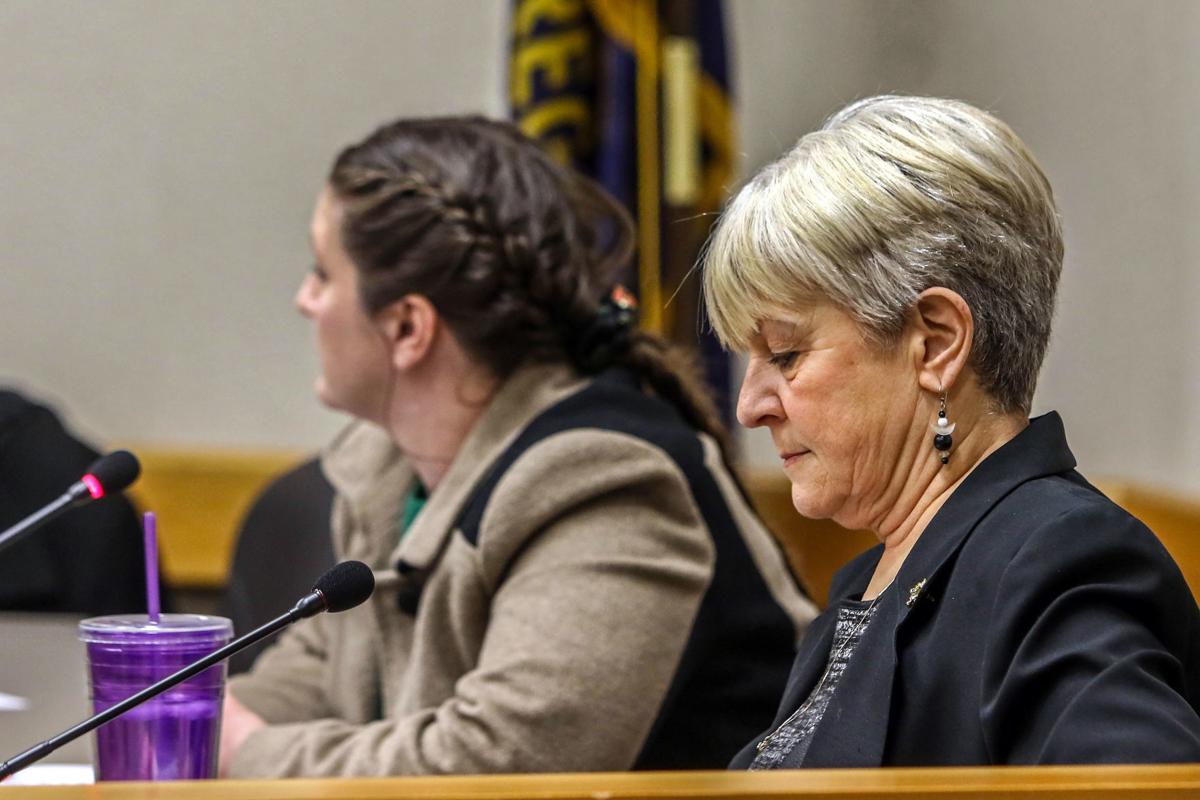 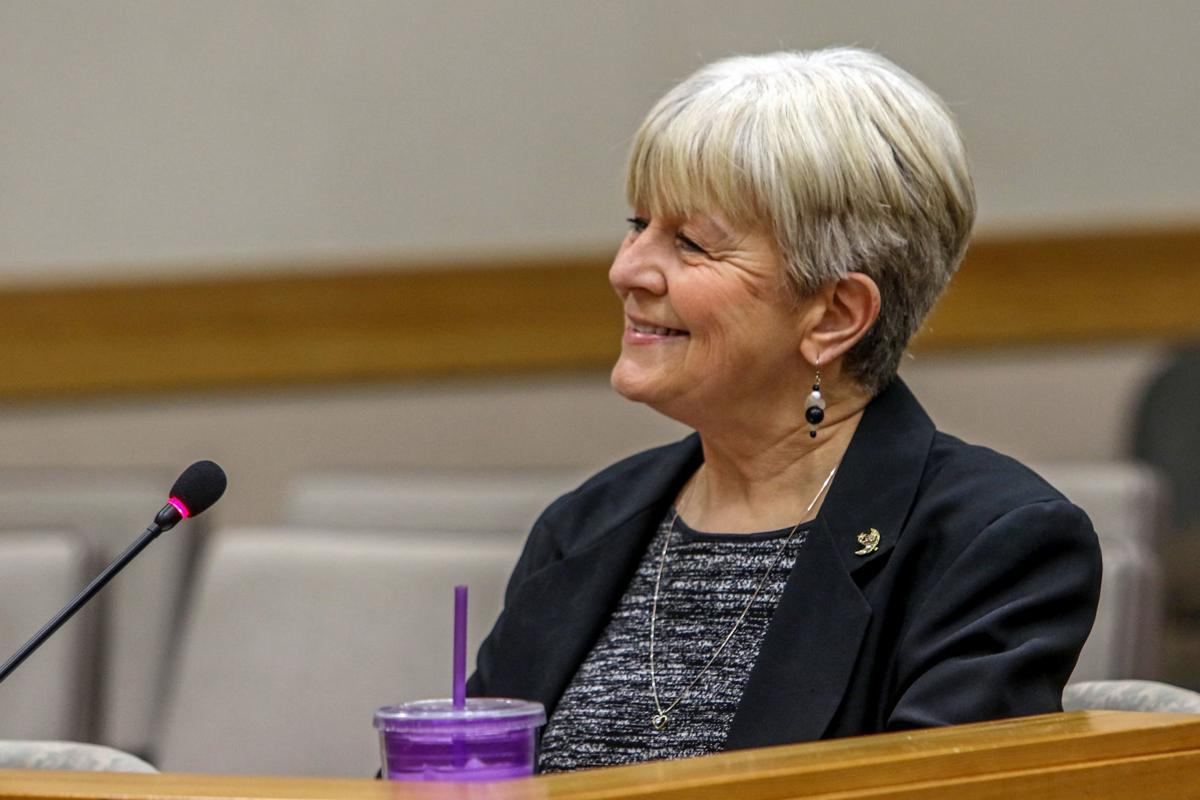 Former Roseburg city recorder Sheila Cox listens to a question during an interview in the city council chambers Monday. Cox and Jeffrey Weller were each interviewed by members of the Roseburg City Council during a special meeting. 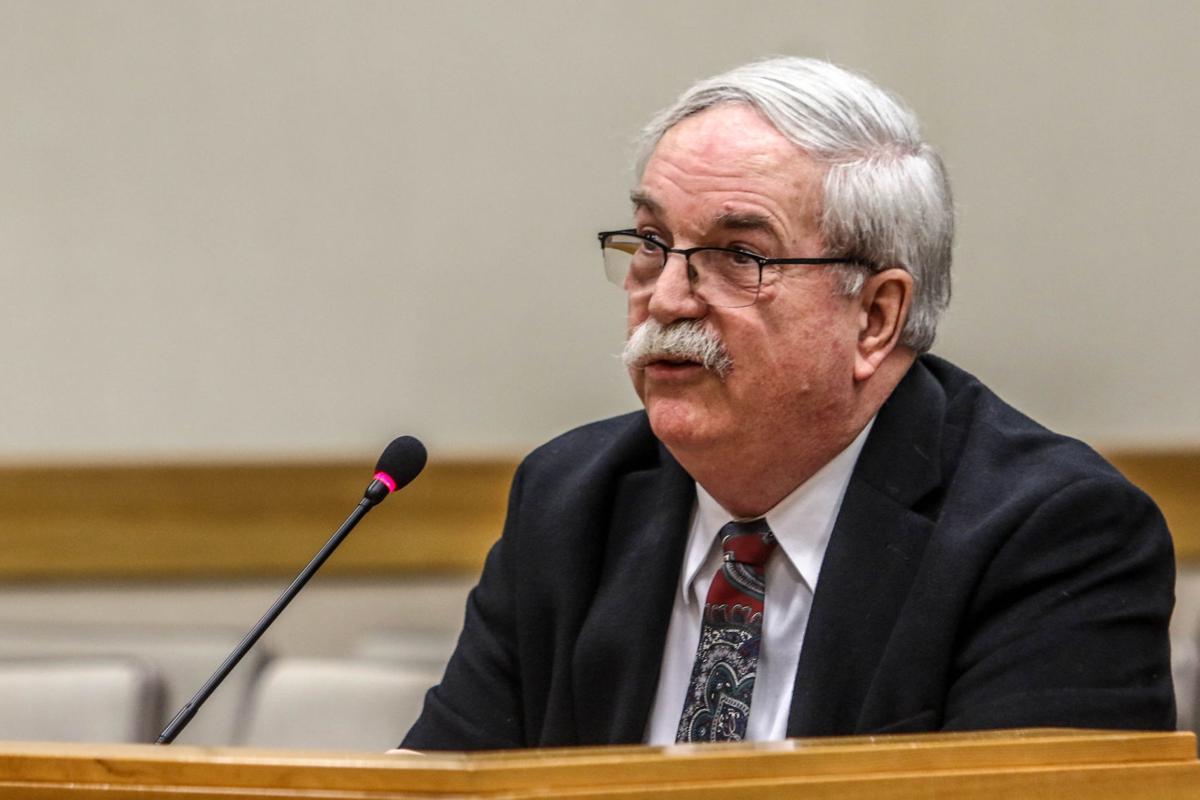 Jeffrey Weller responds to a question during an interview in the city council chambers Monday. Weller and Sheila Cox were interviewed to be considered for the seat in Ward 2, Position 1, formerly held by Tom Ryan.

Former Roseburg city recorder Sheila Cox listens to a question during an interview in the city council chambers Monday. Cox and Jeffrey Weller were each interviewed by members of the Roseburg City Council during a special meeting.

Jeffrey Weller responds to a question during an interview in the city council chambers Monday. Weller and Sheila Cox were interviewed to be considered for the seat in Ward 2, Position 1, formerly held by Tom Ryan.

That’s the makeup of the Roseburg City Council following the appointment Monday of Sheila Cox, a familiar face at City Hall. Cox will take over the vacant Ward 2 Position 1 seat.

Cox, who served as Roseburg City Recorder for nearly 30 years before retiring in 2018, was appointed Monday evening to serve on the council through Dec. 31, 2020. She replaces Tom Ryan, who abruptly announced his resignation in December after serving on the council for nearly 20 years, and with three years left on his term.

The Ward 2 Position 1 seat will be on the November general election ballot, and the winner will serve through Dec. 31, 2022.

Cox was chosen over Jeffrey Weller, a self-employed certified public accountant with nearly 50 years of experience. A third candidate, Ashley Taylor, had applied, but pulled her application before Monday’s selection process.

That process entailed Cox and Weller being interviewed separately by the council.

“Well, everybody here knows me by name,” Cox said as she introduced herself to the council. “I’m Sheila Cox.”

Cox touted her experience as city recorder, which included two stints as acting city manager. Cox joined the city of Roseburg as city recorder in 1988 and served through her retirement in the spring of 2018.

“That period of time gave me a really good understanding of what it takes to be part of a great team,” she told the council Monday.

Cox said she hadn’t planned on being a public official after her retirement, but when Ryan resigned “that left a void in the city.” Cox realized she lived in the same ward as Ryan, and began to think about applying for his seat.

“I decided to step up and give back to the community. City government is the core of the community,“ Cox said. “Being with the city for 30 years, that kind of gets in your system.”

Weller said he was a team player whose experience as a CPA would benefit the council.

“The description of a CPA carries with it a very strong code of ethics,” he said.

Weller also said he would bring “a fresh, unbiased set of eyes to the post.”

In the end, the council went with Cox’s experience.

“Well, it’s not every day that someone applies for a city council seat that has the experience Sheila does,” Councilor Brian Prawitz said.

Councilor Andrea Zielinski said she was surprised and happy that Cox applied for the seat.

“Actually, when I saw her name I was like, ‘What are you thinking? Why would she want to come back?’” Zielinski said. “But I’m so glad you do.”

Cox was sworn in by City Recorder Amy Sowa, who replaced Cox following her retirement. Sowa said being able to swear Cox in was a special moment for her.

“I’m excited to be doing this because I’ve known Sheila for many, many years in the recorder’s office,” Sowa said.

After being sworn in Cox took her seat on the dais, bringing the council back to eight members — and it is believed the first time six of them have been women, city officials said.

The city council recently completed a series of discussions to set goals for the next two years. Those goals included taking a more active role in economic development, addressing the shortage of housing in the city, especially affordable housing, and perhaps the most overriding issue identified — looking for ways to ease the amount of homeless people who congregate in the city.

The council is also dealing with some internal discord. At its last meeting on Jan. 27, Councilor Brian Prawitz suggested fellow Councilor Ashley Hicks be censured and Rich floated the idea of restricting her travel for what they considered her role in unnecessarily stirring up a senior mobile home park by suggesting a homeless shelter be put nearby.

Hicks said she did nothing wrong by advocating for the shelter on her personal Facebook page, and appeared to downplay the concerns of the mobile home park residents by pointing out that they live in the county and therefore are not her constituents.

Rich has said the council will likely take up the matter of discipline for Hicks at its next meeting, scheduled for Feb. 24.

In Other ActionIn other action Monday, the city council also: