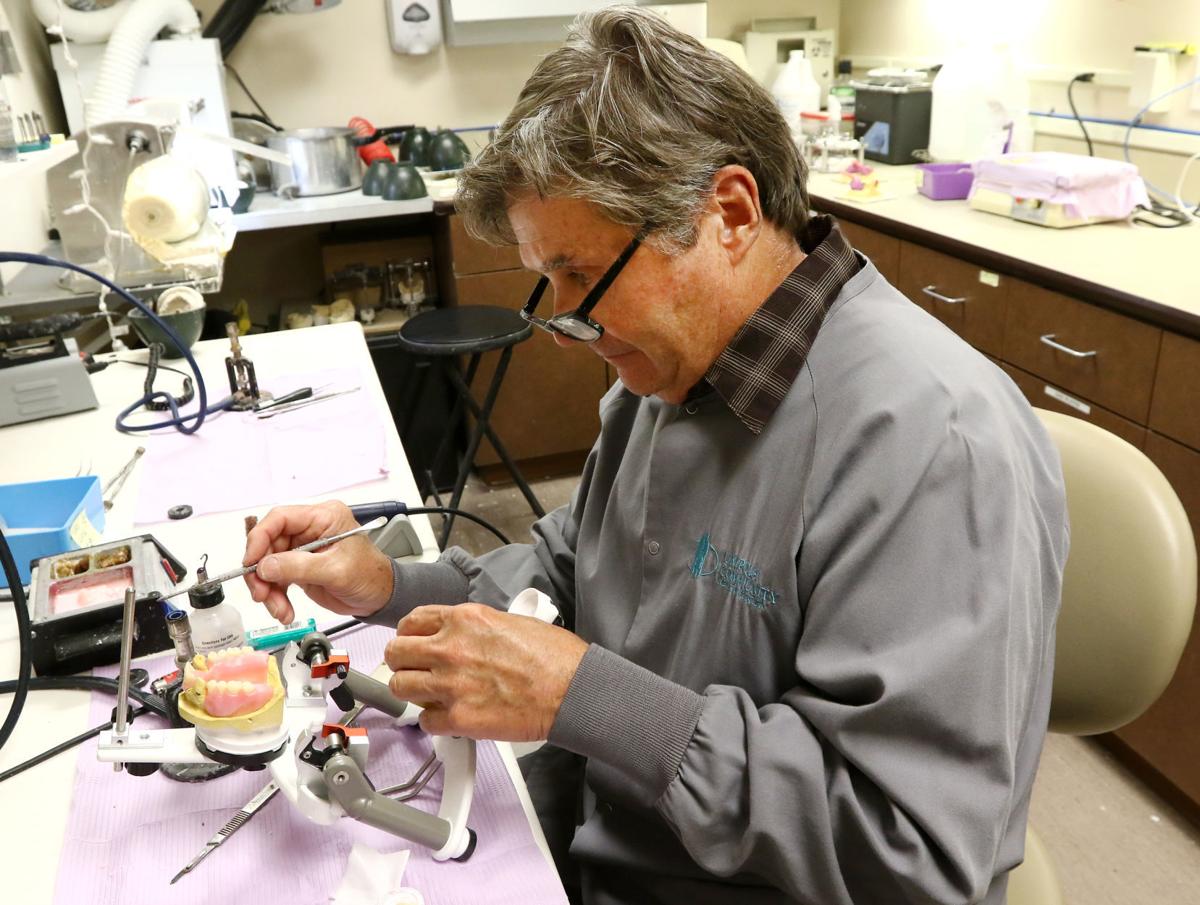 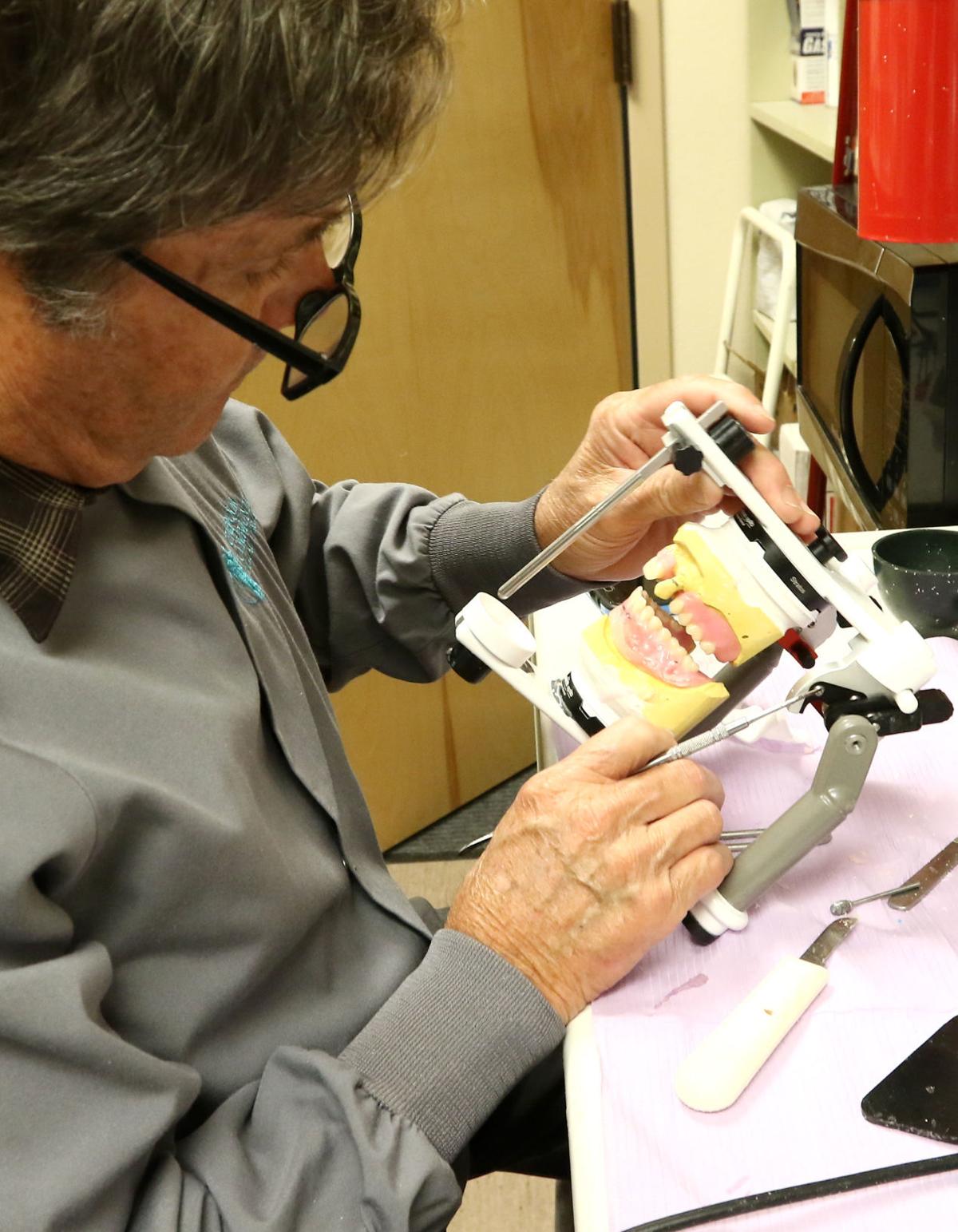 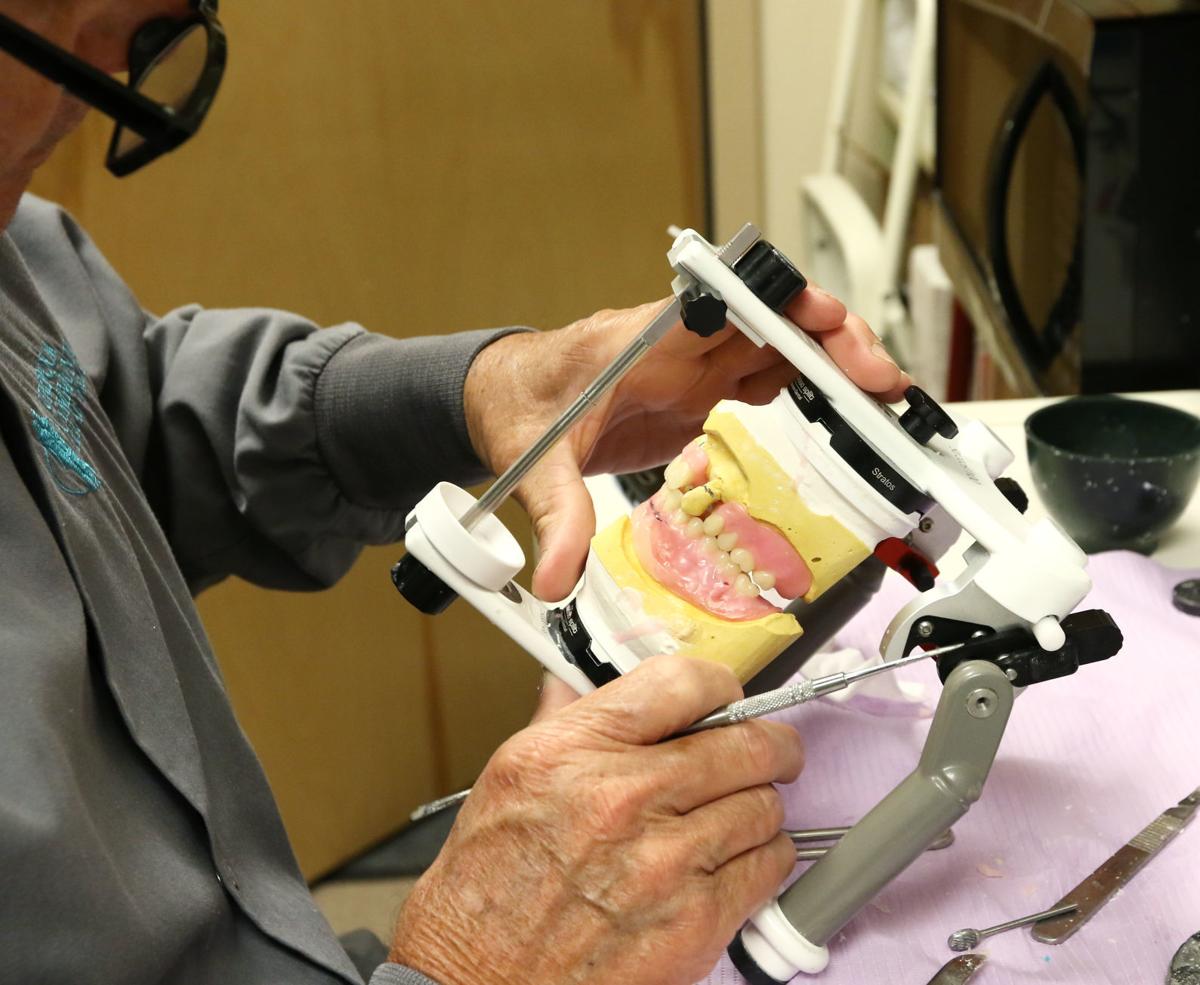 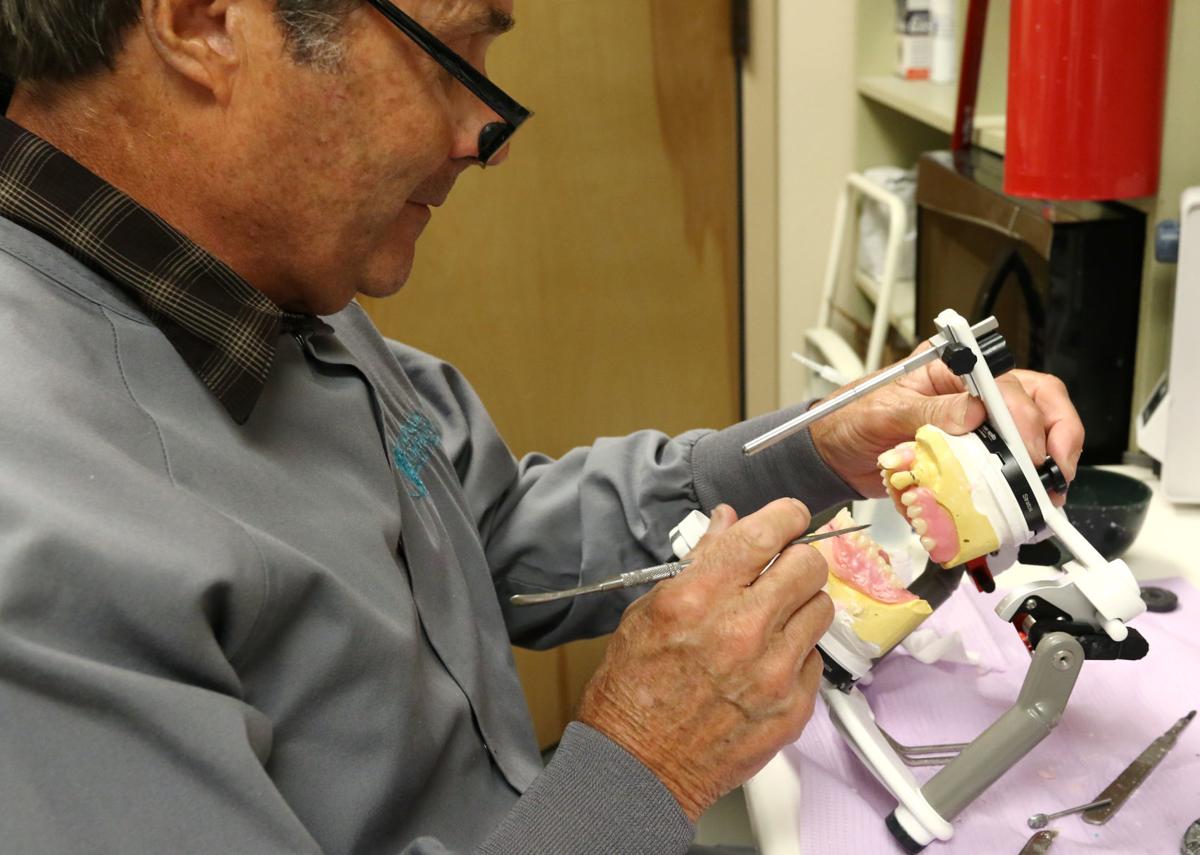 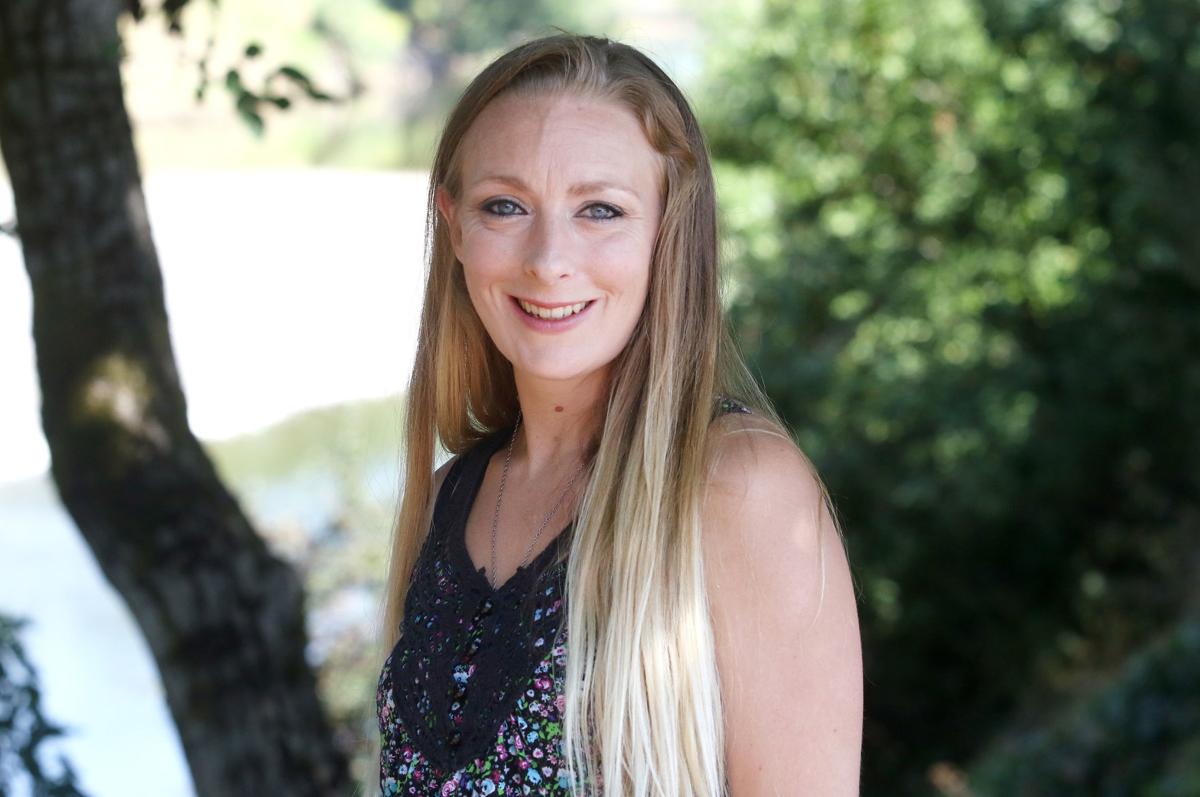 Alecia Piroy shows off her new smile on Aug. 6 after two years of denture work at Umpqua Community Health Center. She has been sober for two years and is turning her life around after an addiction to methamphetamine ruined her teeth and kept her from any sort of consistency.

Alecia Piroy shows off her new smile on Aug. 6 after two years of denture work at Umpqua Community Health Center. She has been sober for two years and is turning her life around after an addiction to methamphetamine ruined her teeth and kept her from any sort of consistency.

Alecia Piroy never really loved her smile, but liked it even less during and after a period of addiction to methamphetamine. When her father died two years ago, she decided it was time for a change.

When the denturist at Umpqua Community Health Center’s dental clinic handed her a mirror to see her new teeth this month, she didn’t believe it was still her.

“I hardly even recognize myself in the mirror,” Piroy said. “I don’t even know how to smile yet. I was amazed. I had to pull the mirror back and make sure that it was really my teeth on my face I was looking at. I was in awe. It was beautiful.”

She’s one of about 2,600 patients in less than four years who came through the clinic to get new dentures and partials.

It took the 34-year-old about two years to get the dentures finished because she missed a few appointments early on and realized patients were scheduled months out due to the demand.

“It was so time-consuming because — I was under the impression it was because half of Douglas County were getting their teeth done.”

According to a 2020 threat assessment from the Oregon-Idaho High Intensity Traffic Area, the availability of meth remains the area’s greatest drug threat. Using the drug can lead to severe health consequences, including stroke and permanent brain damage. In addition, meth use has been shown to have a devastating effect on dental health.

Robert Briseno, chief medical dental officer for the clinic, said the wait used to be even worse before he brought on denturist Robert Schroeder from Jackson County four years ago. Schroeder drives up to the clinic twice a week to see patients.

“The backload is just horrendous,” Briseno said. “We need more rooms, we need more denturists and we need the funds to cover the deficit that that creates.”

As a nonprofit Federally Qualified Health Center, the clinic is required by the Health Resources and Services Administration to offer services on a sliding-fee scale, which allows patients in need to get services for a minor fee or free. It is the only place in Douglas County that provides dentures on a sliding scale because of the federal status.

“We have opportunities to get grants which makes this possible,” Briseno said.

Briseno said he has seen a significant change in the number of young people coming in who need dentures because they lost their teeth to the side effects of methamphetamine addiction; meth eats the body from the inside out as well as causes dehydration that prevents saliva from protecting teeth from acid and decay.

“The biggest problem that we’re facing is that there’s an epidemic of people, mostly young people, that are needing dentures because of their methamphetamine use,” Briseno said. “In years gone by, these people weren’t being served at all. They get dentures when they have no hope of saving their own teeth. It’s not supposed to be that way. It’s just a sign of the times. Everything is on fast forward.”

Briseno said Douglas, Jackson and Josephine counties “pretty much lead the state in meth use.”

Briseno joined the clinic about four years ago and quickly realized the clinic needed to do more for denture patients. He said he’d never put dentures on a patient under 50 years old before coming to the clinic, but now there’s “no hint of catching up” on the demand for dentures.

“I recognized that we had a deficit,” Briseno said. “We weren’t doing dentures efficiently and honestly, some of them weren’t very good either. The first few months, we were absolutely overwhelmed. We were underwater. Our denturist was seeing 30 people a day. That’s a lot of denture patients.”

The clinic has 9 dentists, only two of whom work full time, and one denturist. The clinic added a lab just for dentures two years ago and constantly has 140 to 150 denture molds being prepared between the main office and the lab.

Piroy was a stay-at-home wife and mother for the last 10 years. Two years ago, her father died and she decided it was time to get sober, leave a bad relationship and get back on her own feet. She said his death was the turning point that propelled her to go all-in on turning her life around.

Briseno said a lot of patients who come through the clinic with “meth mouth” have a hard time finding employment because of their teeth. Piroy is proud to be two years sober and is looking for work so she can provide for herself and her three children.