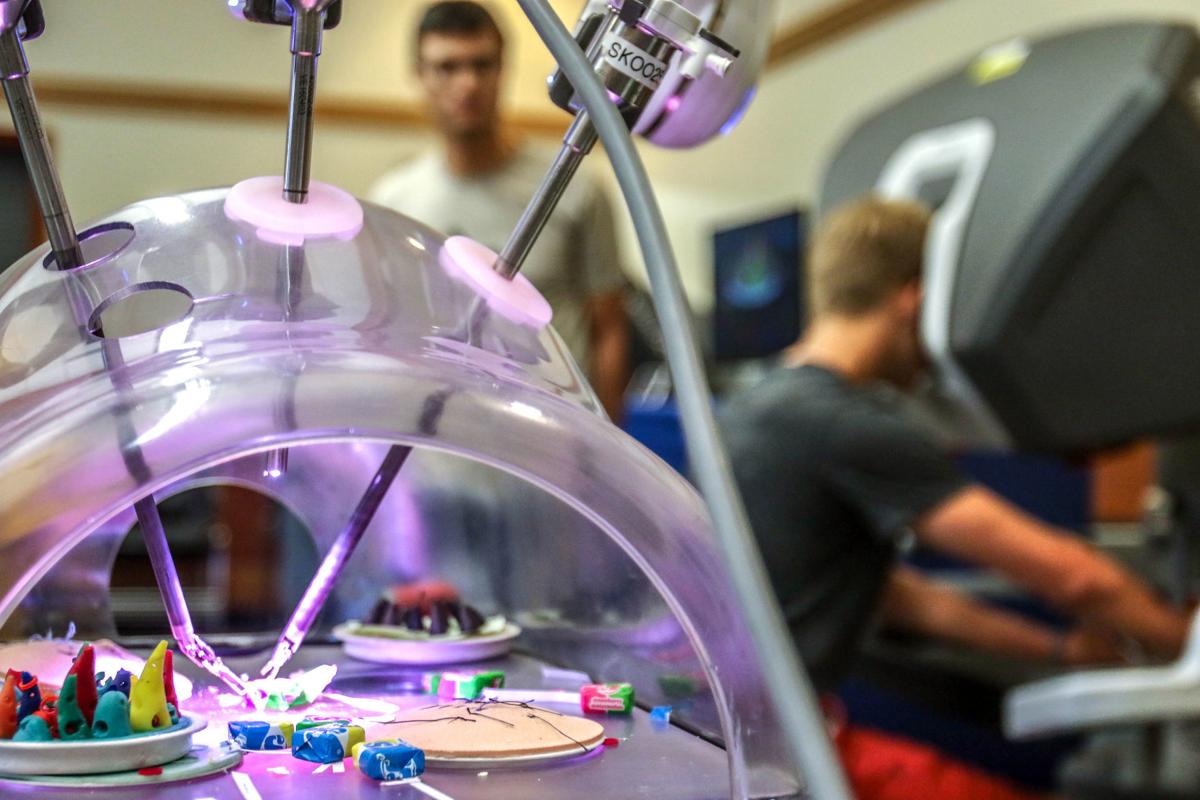 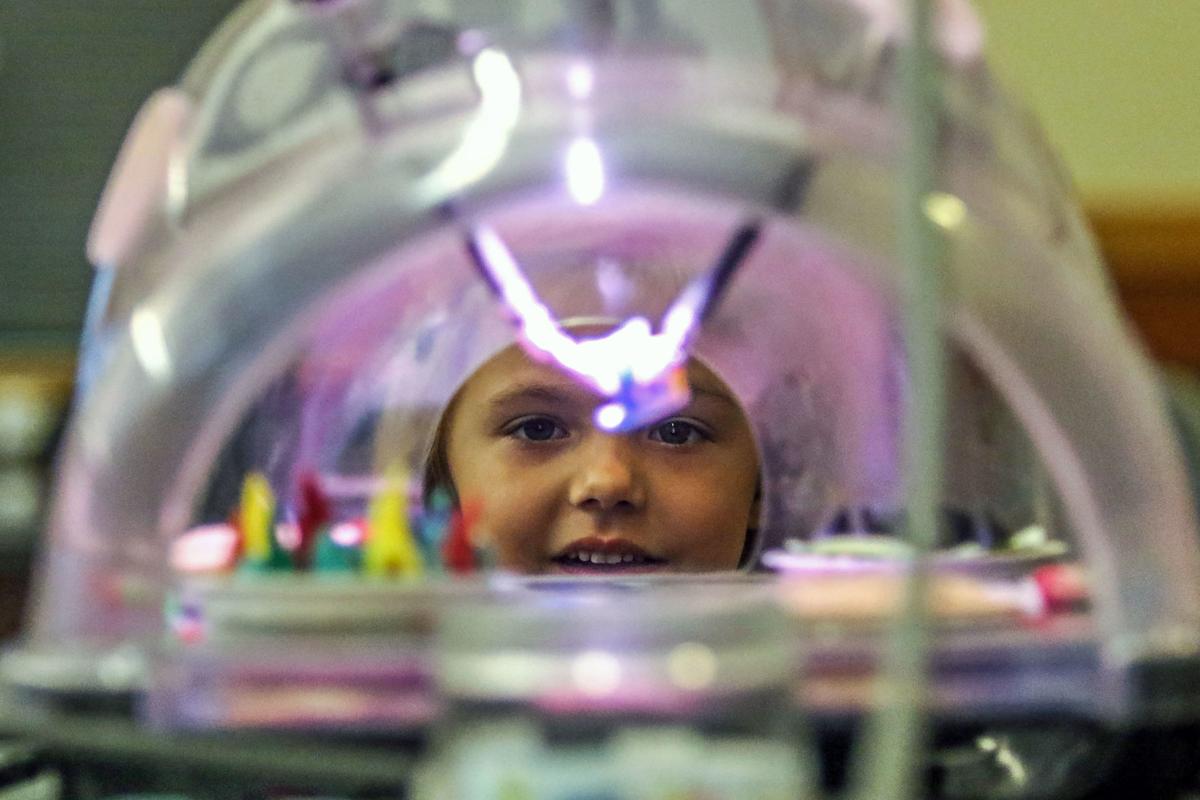 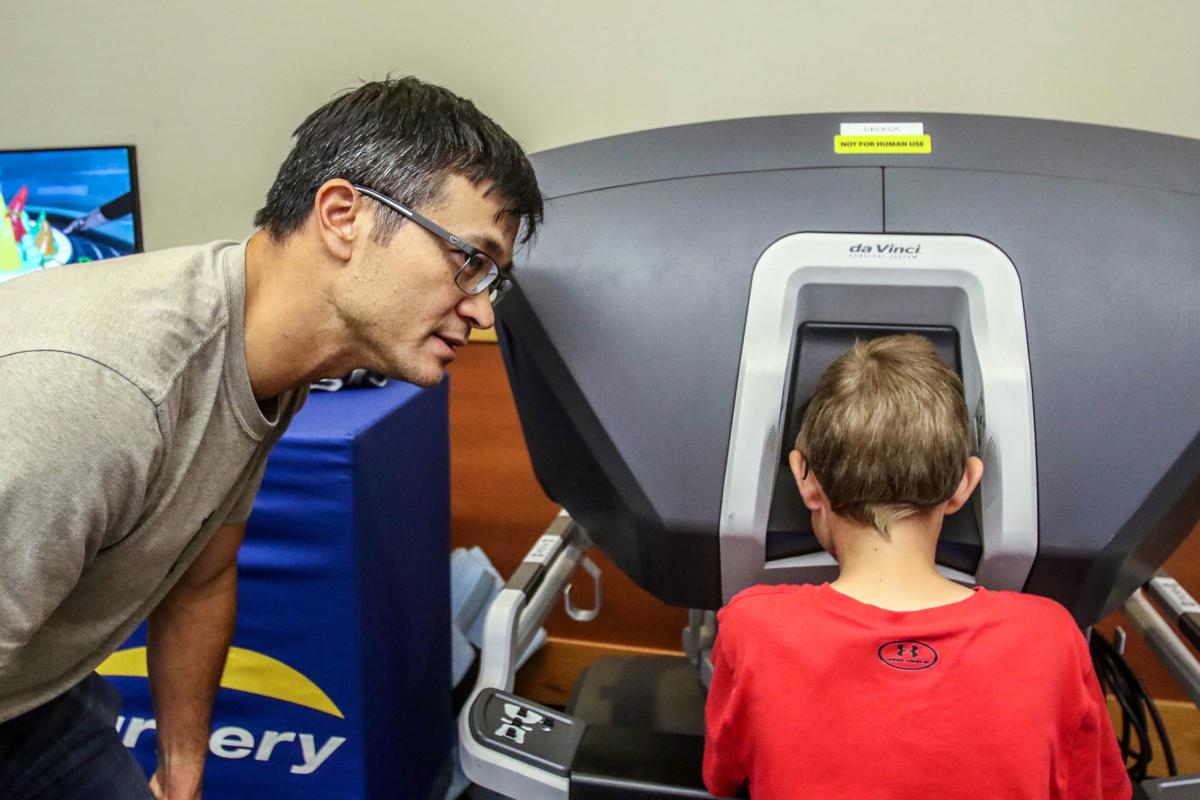 Dr. Mark Donovan, left, one of two robotics surgeons at Chi Mercy Medical Center, watches a young participant peer through a console while operating robotic arms during a demonstration at the Roseburg Public Library on Saturday. 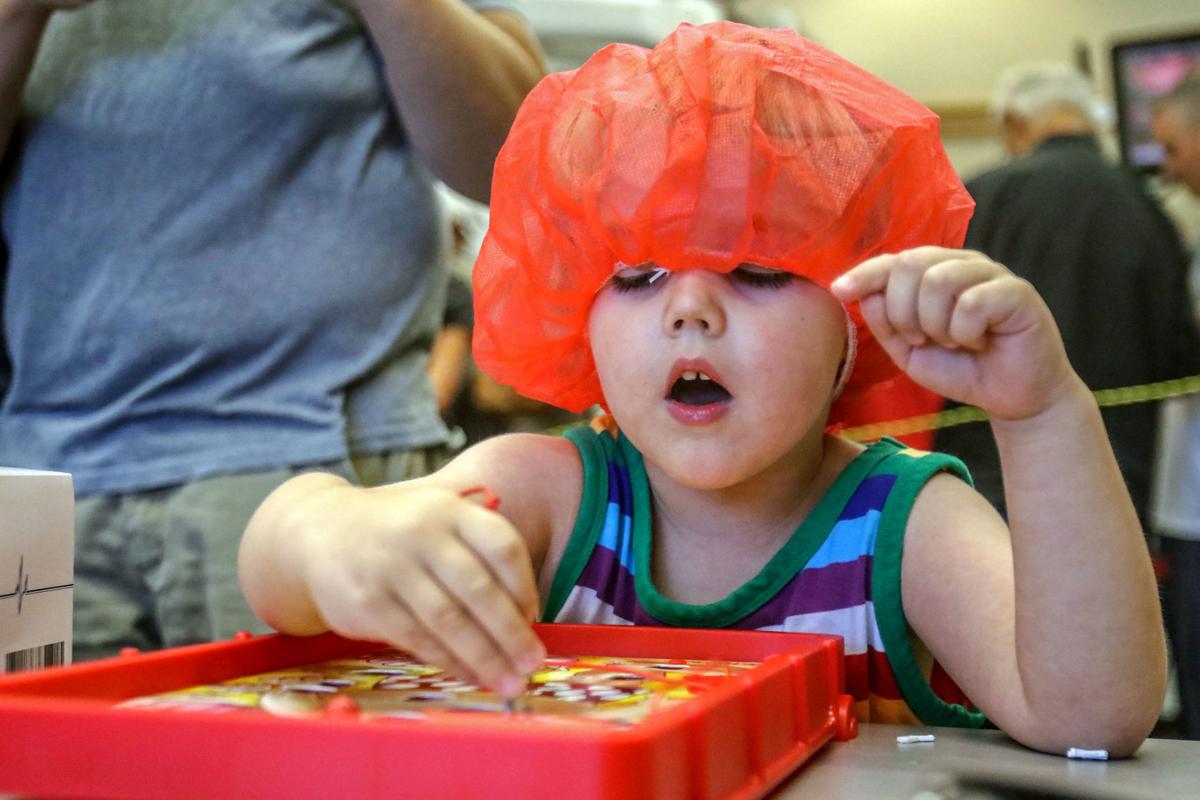 Oliver Denley, 4, plays a game of Operation while wearing surgical garb during a demonstration of robotic surgery at the Roseburg Public Library on Saturday.

Dr. Mark Donovan, left, one of two robotics surgeons at Chi Mercy Medical Center, watches a young participant peer through a console while operating robotic arms during a demonstration at the Roseburg Public Library on Saturday.

Oliver Denley, 4, plays a game of Operation while wearing surgical garb during a demonstration of robotic surgery at the Roseburg Public Library on Saturday.

With the help of some Starburst candy, kids and adults got a taste of robotic surgery Saturday at the Roseburg Public Library.

Healthcare professionals from CHI Mercy Medical Center, in partnership with Intuitive Surgical, showed off the cutting edge technology available for surgery patients since 2017 at the hospital.

Except for a nostalgic game of Operation available for young people, no operations were actually performed during the demonstration. But participants young and old lined up for a chance to peer through a window and operate the robotic arms of the da Vinci Surgical System with the help of its remote camera. The tasks were to move small objects, including Starburst candy. Once they mastered that, people were challenged to unwrap the candy by only using the robotic arms.

Lindsee Van Slyke, a registered nurse and the robotics coordinator at Mercy, said the technology is used to perform minimally invasive surgery with the surgeon in complete control. Because the incisions are small, there is less risk of blood loss and less scarring from the operation.

“The advantage is we want more people to have less invasive surgery because it decreases your length of stay in the hospital, pain scores are lower, (and) patients are happier because you have little tiny ports as opposed to a big open site,” she said. “It has just kind of revolutionized surgical procedures.”

“Ergonomically, it’s better for him. The surgeon that operates eight hours a day is going to be less fatigued, and it has the tremor control,” she said. “There are doctors that say the robot has allowed them to extend their practice by five years.”

“There are a lot of surgeons (who are) allowed to extend their career because the robot is doing a lot of the physical work,” said Dr. Mark Donovan, one of two surgeons trained on the robotic surgery equipment. The other is Dr. Brent Soder.

Donovan said the surgeries are much less invasive and offer a lot quicker recovery for the patient, and it allows him the opportunity to do a lot of surgeries that he otherwise wouldn’t be able to do locally.

“It makes it easier for me to see and I have more precise control when I’m picking up an organ or manipulating some tissue, or taking out a tumor or whatever it is I need to do,” Donovan said. “Patients can go home — sometimes the same day, depending on the surgery. The wounds are smaller so there is less risk of infection or big scars, and faster recovery is the benefit to the patient.”

The robot has a high-definition 3D camera that shows good visual depth, and it gets 10 times optical zoom. The instruments have a greater range of movement than human hands.

Van Slyke said the kids who have grown up with electronic technology, pick up the technique easily.

“These kids get on here and just take off because they’ve spent so much time on video consoles their spacial awareness is insane and they think in terms of technology and don’t think it’s weird that you’re separate a little bit from the patient” Van Slyke said. “The kids love it, they couldn’t wait to get on there.”

Melrose Elementary School fifth grader Gabriel Allen tried his hand at operating the robot, but he didn’t know it was for operating on people.

“I thought it was just for the Star Wars game, I like it,” he said. “It was like a video game.”

Randy Hubbard, the operating room manager at Mercy is sold on robotics.

“It’s expensive, but for your patients, there’s a lot less pain, a lot less narcotics, people get home a lot quicker and less bleeding,” Hubbard said.

He said Mercy was very fortunate to get Van Slyke, the program coordinator, from a hospital in Dallas, Texas, where she already had experience with robot surgery.

“She had a world of knowledge already, so for her and for us, everything just fell into place,” Hubbard said.

“It did require a lot of training, in the beginning, to get it up and going and it’s not cheap, but it’s a great asset to our community,” Van Slyke said. “It’s the same level of care that you get in any bigger city, and it has come to our city, so it’s vital that we have it to stay competitive and offer our people the best care.”