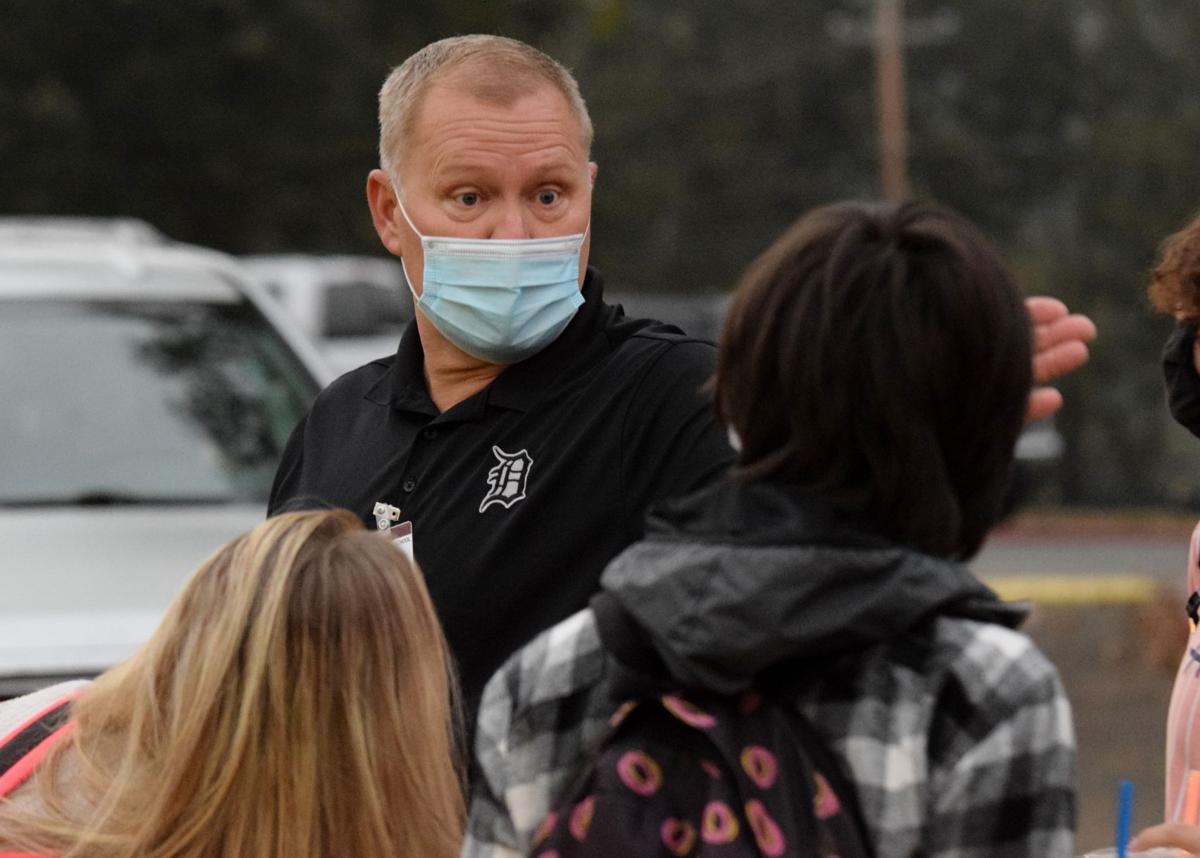 Douglas High School Principal Craig Anderson directs students to their first class during the second day of in-person school the morning of Oct. 6 in Winston. 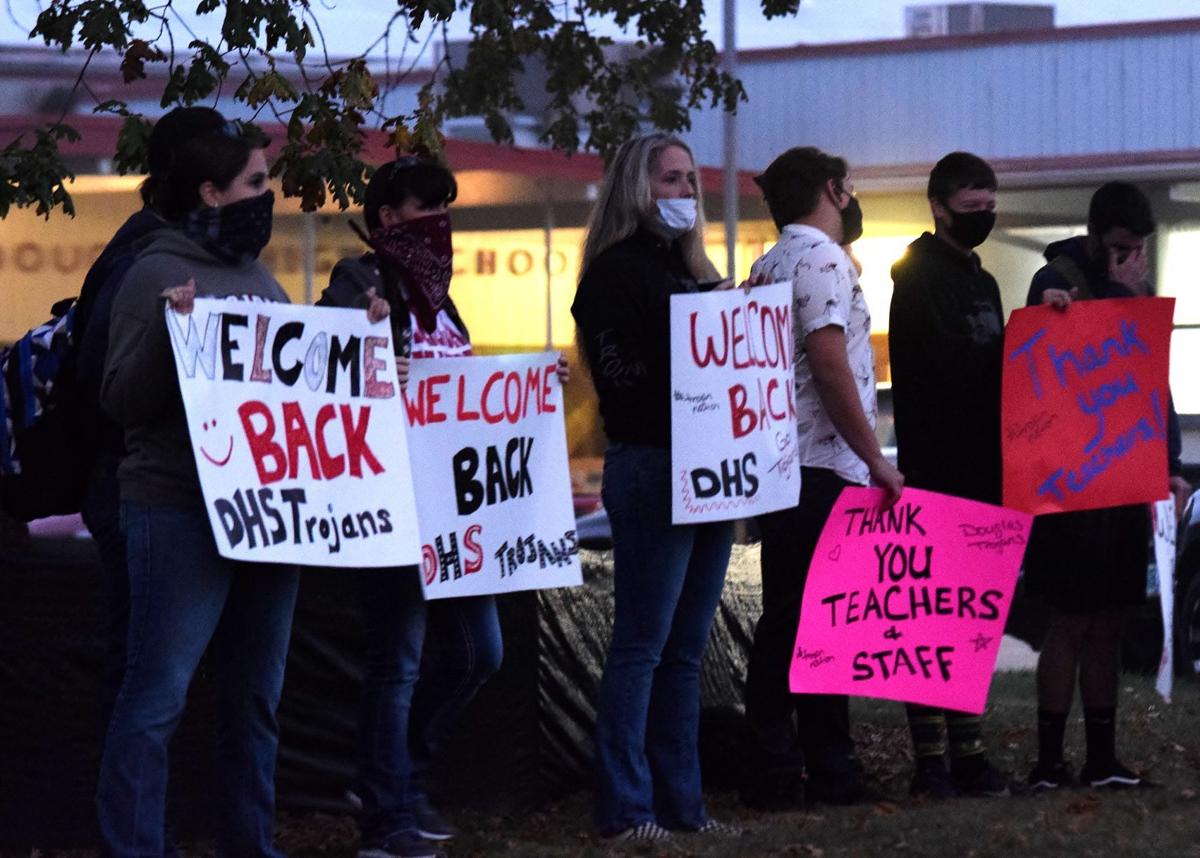 Parents and friends of Douglas High School students hold signs to greet students coming in for their second day of in-person school on Oct. 6 in Winston.

Douglas High School Principal Craig Anderson directs students to their first class during the second day of in-person school the morning of Oct. 6 in Winston.

Parents and friends of Douglas High School students hold signs to greet students coming in for their second day of in-person school on Oct. 6 in Winston.

Requests for substitute teachers, filed by staff at Douglas High School, show the impact a positive COVID-19 test had on teachers at the school in Winston.

On Oct. 20, Douglas High School reported that a student had tested positive for COVID-19, and the following day the school was closed due to staffing issues, a continuing problem for the Winston-Dillard School District.

The school district released public records to The News-Review, but superintendent Kevin Miller did not answer any additional questions or reply to an email asking for an interview.

The day after the COVID-19 diagnosis, a Wednesday, school was canceled as the district said seven staff members were asked to quarantine and an additional six staff members were unavailable for work. The Douglas Education Service District, which provides substitute teachers for most public schools in Douglas County, was unable to fill all of the positions within the short timeframe, which resulted in the canceling of school and extra-curricular activities.

Douglas Education Service District Superintendent Michael Lasher wrote in an email that requests for substitutes were likely filed so late Tuesday or early Wednesday that the majority of substitutes did not see the opening.

“When it probably appeared to the district that they wouldn’t get enough openings filled, they closed school that day,” Lasher said. “The same thing might happen in other acute cases, e.g. where there is a stomach flu outbreak and suddenly a district finds that they don’t have enough healthy teachers and substitutes to operate the next day.”

By Thursday, school was back in session with about half of the classes taught by substitutes or taken over by other teachers at the school.

A substitute was requested each day because of a resignation, and another teacher was on sick leave for the entire week — even before the coronavirus was a factor at the school.

The school district itself released a statement that seven staff members — including six teachers — had to quarantine. It is not clear who the seventh staff member was or why a substitute was not requested.

Six teachers who were not required to quarantine also called in sick following the COVID-19 diagnosis. A day later, four called in sick. This included a teacher who had been sick prior to the student’s diagnosis.

Two of those staff members, Darren Polamalu and Jason Tingle, were out on sick leave on both days and wrote in their notes to the substitutes that the school district was not meeting state guidance and that a student had tested positive at the school.

Lasher said that neither of those positions were filled by substitutes.

Polamalu said he was not feeling well on the days he requested a substitute and that he added the note to inform a potential substitute of the COVID-19 case at the school.

“My subs are generally retired teachers and therefore at a higher risk. I wanted them to know what the circumstances are, so they know what they step into,” Polamalu said.

He added that he suffers from high blood pressure, which elevated when he found out about the positive coronavirus results from the student.

“Heart disease runs in my family and I didn’t want to take my chances,” Polamalu said.

Prior to the official start of in-person learning, on Oct. 1, approximately half the staff members at Douglas High School called in sick for a freshmen orientation, effectively canceling the orientation.

At the time, the school did not meet the state metrics for reopening. However, by Oct. 4 the school district was granted an exception by the Oregon Department of Education that allowed the high school to begin offering in-person classes under certain guidelines.

On average, 275 students attended Douglas High School during that week, or 84.6% of the overall student population.

Douglas High School Principal Craig Anderson said during an Oct. 14 school board meeting that there were 140-150 students on campus each day.

The school also offers students and families the chance to participate in school only via online means.

“Some families have decided that in-person learning works for them while others have decided that going to online distance learning is their best fit,” Anderson wrote in the school district’s fall newsletter. “This means that we at (Douglas Alternative High School) have welcomed more than 100 students from Douglas High School to complete their online distance learning education. These students are using the E2020 Edgenuity platform and have made some great progress this first quarter.”

E2020 Edgenuity is an online learning platform for kindergarten through 12th grade, where teachers can post curriculum and students can turn in schoolwork.

Winston-Dillard School District Superintendent Kevin Miller expressed multiple times that he was happy students were able to return to school.

“This year it is beyond great to have our students and staff back for the new school year,” Miller wrote in the fall newsletter. “I say this because we know many school districts in our state cannot currently offer in-person services and we are lucky to be able to do so. Certainly, the pandemic has affected us all and will apparently continue to do so as we approach winter.”

But while students were given the option of returning to in-person learning or continuing virtual learning, staff were not provided with that option.

The middle school, which offers courses for seventh and eighth grade, was able to open under a remote, rural and small school exception a week before the high school. A staggered approach to reopening the schools within the district that had been previously determined by the school board.

“Our school board has had to work through many difficult decisions in the past several months,” Miller wrote. “They all deserve our gratitude for their efforts and for keeping a ‘kids first’ focus while performing their important work.”

But keeping the kids first focus, meant that the school district lost a counselor at Winston Middle School and a Spanish teacher at Douglas High School resigned as a direct result of the school district’s reopening plan. There were additional resignations as well, but no reasons for resignation were given.

During an Oct. 14 board meeting, board member Curt Stookey said, “Maybe we can stop some resignations of teachers, maybe with a bit more talking with the board and teachers, the community.”

To which board chair Lorna Quimby replied, “I tried and it didn’t work.”

Miller said he would continue to work on it, but that retaining personnel had been a challenge for years.

The school district was able to hire six employees in August, including two new staff members at Douglas High School.

The U.S. reported 132,450 new coronavirus cases today, by far the highest number ever.

The U.S. reported over 10 million cases and over 240,000 deaths from coronavirus today.

The world will surpass 50 million cases and 1.25 million deaths from coronavirus tomorrow.

The virus did not simply disappear after the election.

Today’s press release from our hypocrite Commissioners now states, “Our local businesses have been hit hard already this year, don’t be the reason the authorities sideline your favorite restaurant or bar for the remainder of the season.” Considering the NUMEROUS actions our County Commissioners have taken to oppose previous coronavirus restrictions and encourage non-compliance, it is extremely hypocritical on their part to NOW point their collective fingers at residents for being the “reason the authorities” are forced to implement stricter coronavirus mandates. All along, our Commissioners COULD have been part of the solution but chose to be one of our county’s biggest problems.

The 94 coronavirus cases over the past two weeks represent a RECORD HIGH case rate of 84.7 today for Douglas County. The school re-opening metric is a maximum of 50.

The six counties surrounding Douglas County reported 153 new coronavirus cases today and a RECORD HIGH 699 cases and 6 deaths over the past week.