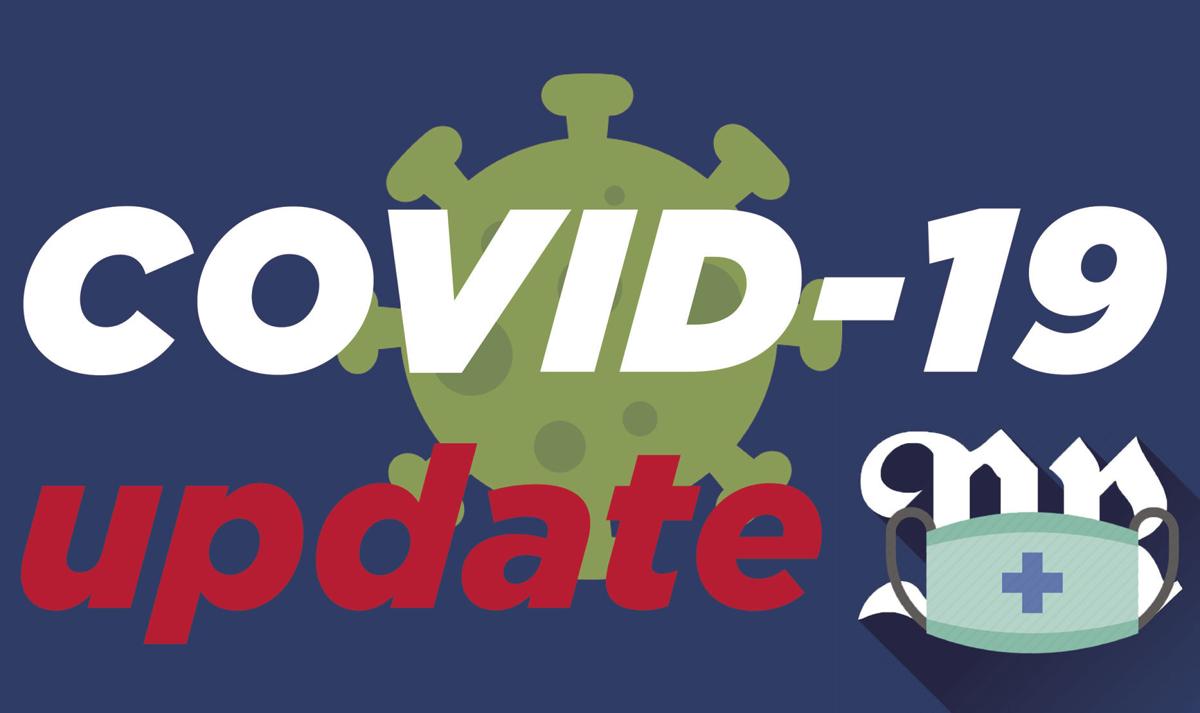 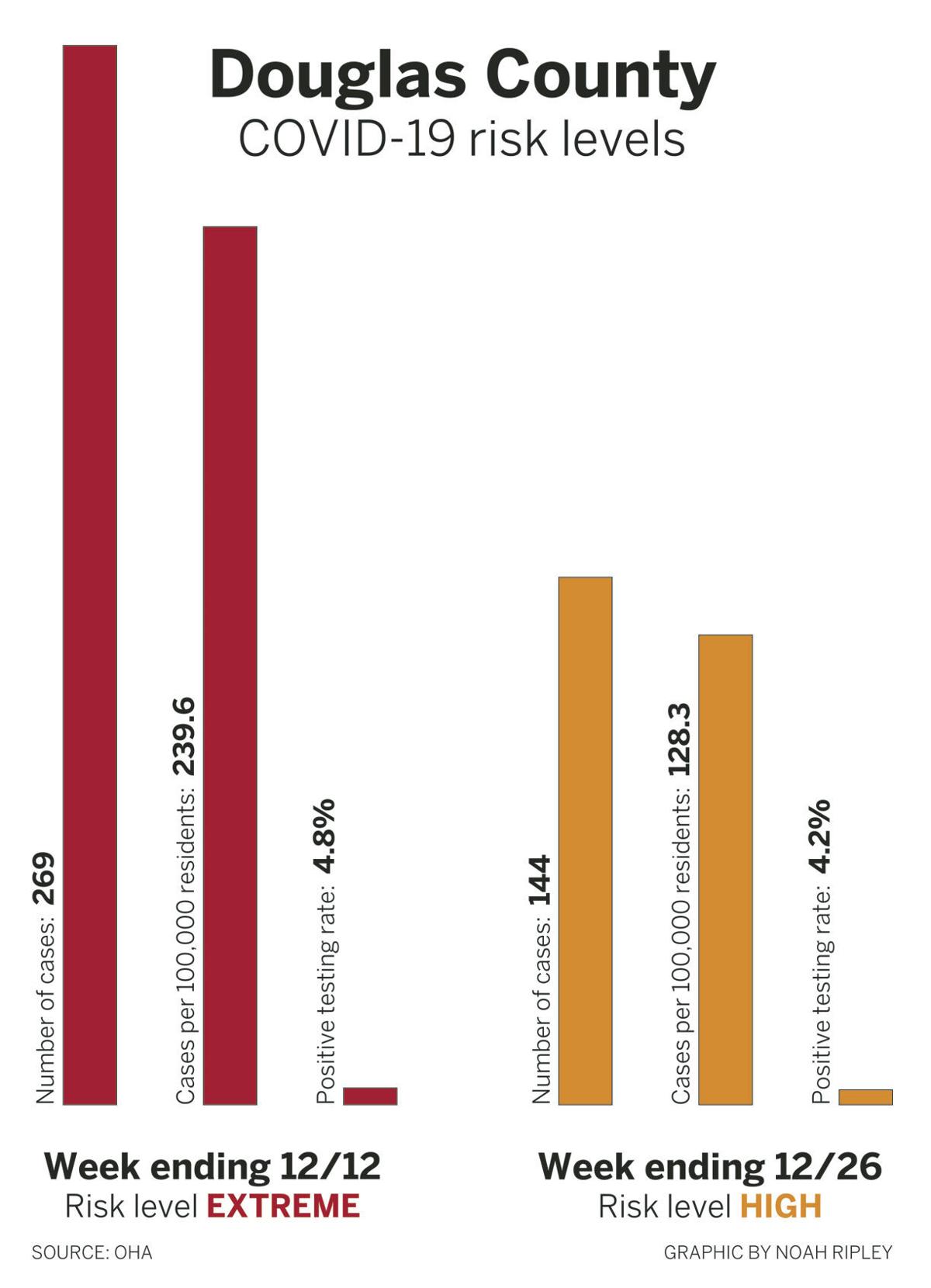 Gov. Kate Brown announced Tuesday that Douglas County will be allowed to ease some restrictions for businesses and other facilities beginning New Year’s Day.

The county is one of five that has been dropped from extreme risk to high risk, the second highest of four possible levels.

“We want to thank our residents and businesses for following the recommended guidelines and for making good decisions in order for our communities to start opening back up,” the Douglas County COVID-19 Response Team said in a press release Tuesday.

Here are some of the changes that can take place beginning Jan. 1:

• Restaurants and bars will be allowed to open for limited indoor dining.

• Theaters and museums can reopen.

• Indoor and outdoor businesses, services and activities will be able to include more people at a time.

A 61-year-old man who was diagnosed with COVID-19 Nov. 30 and died Dec. 12. The death was Douglas County’s 38th since the pandemic’s beginning.

“If we work together, we will see more counties begin to lower their COVID-19 risk levels,” she said in a press release. “If communities let down their guard too early, we could see our hard-won progress unravel just as quickly.”

The new risk level will be in place through Jan. 14, and county risk levels will be revisited every two weeks.

Seven counties in Eastern Oregon will be at an even lower risk level, while 24 of Oregon’s 36 counties will remain in the extreme risk category at the beginning of the year.

In other news, the Douglas Public Health Network reports it is supporting 104 people with COVID-19 who are in isolation and another 329 people who have been in contact with an infected person and are in quarantine.

Ten county residents are hospitalized with the illness, nine locally and one out of the area.

The Oregon Health Authority said 4,356 vaccine doses were administered statewide Tuesday, bringing the total number of first doses statewide to 25,972. All the vaccinations so far have been at hospitals and long-term care facilities.

The state reported Douglas County has vaccinated 214 people so far.

OHA says douglas county has received 1595 vaccines in last 9-14 days. So what is the reason why we have only vaccinated 313 people as of yesterday?

Don't ask our County Commissioners. They've abdicated their duty to protect the county resident's health to some unknown entity. Their website says "don't call us" about vaccine issues. But if you need a loan for your business, give them a call.

Since receiving the vaccine, Douglas County has had 4 days when zero doses were administered. Unlike most other counties, doses don't get administered on weekends and holidays in Douglas County. So, we are looking at few doses put in arms over the next week.

Since the Douglas County Public Health Network and our County Commissioners don't want to be involved in saving resident's lives, I suggest contacting one of your mask wearing Representative or Senator for answers.

All of this is according to the Oregon Health Authority vaccination dashboard.

Below are the number of people who have been vaccinated in the 6 counties surrounding Douglas County as of today. Only Jackson and Lane Counties have greater populations than Douglas County.

Only 6 counties in Oregon have vaccinated a lower % of their residents than Douglas County. Most of those counties don't have their own hospitals.

Right! This county is so lackadaisical it's criminal. This is a national emergency-where's the sense of urgency.

Mary Ann On Gilligan’s Island dies of Covid-19. There may be a few of you around who still remember watching Gilligan's Island every day after school.

The Commissioners Response Team reported 140 coronavirus cases over the past two weeks which calculates to a 14-day case rate of 124.7 today for Douglas County, which is less than the case rate of 200 required for in-dining restaurants, bars, theaters and health clubs to reopen.

Forgot to say, thank you to carisa cegavske for her good reporting on local corona virus information. It is very helpful. I called my dr and they did not know anything about vaccine roll out & referred me to mercy who did not know anything who referred me to health department who could only give me state information, not local distribution plan. Come on guys, we've known for months this vaccine was coming.

Cjb, the following info was published on the county commissioners/DPHN daily report within the last hour. It is not satisfying when it comes to our questions.

We continue to receive calls and requests for more information on the availability of the COVID-19 vaccine. We wanted to remind citizens US Center for Disease Control (CDC) and then our state health authority, OHA are in charge of distributing, prioritizing and establishing the guidelines for the release of the COVID vaccines. The CDC started the process of distributing vaccines earlier this month to phase one – healthcare workers and care facility workers, and is working with state health authorities to initiate the next phases. Douglas Public Health Network, Mercy Medical Center, Aviva, the COVID Hotline or the Douglas County COVID Response Team are not in charge of the COVID vaccine distribution process. We too are awaiting more information from the CDC, and the Oregon Health Authority, about the release of the next phase of COVID vaccinations. It’s important to note that the recommendations for vaccine distribution that are being proposed by the CDC are also up for interpretation by state health authorities, who have the authority to modify the distribution lists. Information on how and when the next phases of COVID vaccines will be approved and distributed is still forthcoming. In the meantime, we encourage you not to call us, instead log onto the CDC website or the OHA website, for the latest updates and information on the status of vaccination distributions."

mworden, thanks. TL/DR version is, I think, "Don't call us. We'll call you." And our rollout might be as awful as Florida's. Would that it were done as well as Illinois'!

According to Moderna, their COVID-19 vaccine remains stable at 2° to 8°C (36° to 46°F), the temperature of a standard home or medical refrigerator, for 30 days. And Pfizer says its vaccine, which needs to be kept at minus 70 degrees Celsius, can last in a specialty freezer for up to six months. At the current rate of vaccinations, I worry that some of this precious vaccine may go bad before it's used.

13 people tested positive today in Douglas County. It will be horrible if one of those people dies from the virus while the cure is sitting unused in our local hospital refrigerators because our leaders can't get their act together.

I'm 80 yrs old with underlying health condition in category 1b hopefully for the vaccine. I'm anxious due to lack of information about when will it be my turn, do i have to stand in line with people who don't where a mask, will someone notify me. Dr. Dannenhoffer's facebook reports, i understand are extremely informative. I'm not on facebook & don't believe in it. Is there some other way for him to communicate to public at large, say thru a column in the newspaper to help us it thru next few months. Biden just said at the rate these vaccines are rolling out it will take 10 yrs. Even if we don't know the dates, please at least tell us the distribution plan. Drive thru feels safest to me.

Other than prioritzing who gets the shot, it appears there is NO plan and almost zero communication locally. Other than knowing where the vaccine is going, every state, county and local hospital is administering it differently. We've known this vaccine was coming for months and almost zero thought by the science guys has been put into making it a reality. The lack of leadership at every level of government is absolutely astounding. Based on Douglas County's rate of inoculation over the past two weeks, it will take 41 years for every resident in Douglas County to receive their two doses.

I'm with you and was hoping the vaccine could be administered like the flu shot at drive-thru locations. However, I'm not reading about any drive-thru vaccinations anywhere, probably because of onerous documentation requirements and because there have been rare reports of serious allergic reactions to the vaccine.

I do hope that the situation in the county is getting better; however, there is such a lag in testing, reporting, and disease evolution, that all we know is that some weeks ago, community transmission dipped a bit. I mean, the latest reported death occurred eighteen days ago, and is just now reported; he was diagnosed a full month ago, and we don't know how long before that that he was infected, sick, infectious, and had the test obtained. It would not be unreasonable to think that we are looking backwards in time about six weeks to when that person was infected.

If we are not flying blind, we at least have a beam in our eye. Not a mote.

This is excellent news, despite what some people may say. Hopefully the decline in cases continues and the kids can get back to some type of in person school by the end of January.

Douglas County residents really need to ask themselves why our Douglas County Public Health Network continues to ignore CDC testing guidance. DPHN advises people (below link) who have been in direct contact with someone who tested positive for COVID-19 to “WAIT” and NOT get tested unless they develop symptoms.

Back to the original question; why does DPHN continue to advise AGAINST testing direct contacts? Chances are it is because our County Supervisors DON’T wish to identify more coronavirus cases that would impede their political agenda to reopen all businesses in Douglas County. Testing direct contacts would assuredly identify more coronavirus cases in the county. Failing to identify those increased cases terminates contact tracing and endangers the health of Douglas County residents. Our County Commissioners know that but choose reopening businesses over residents health.

I have a family member who has tested positive for coronavirus. Like half of Americans, she has underlying health conditions that make her prognosis not good. It has bothered me from the beginning that our County Commissioners, despite what they claim, have demonstrated from the beginning that they care more for the welfare of Douglas County businesses than they care for the people who elected them into their positions of leadership.