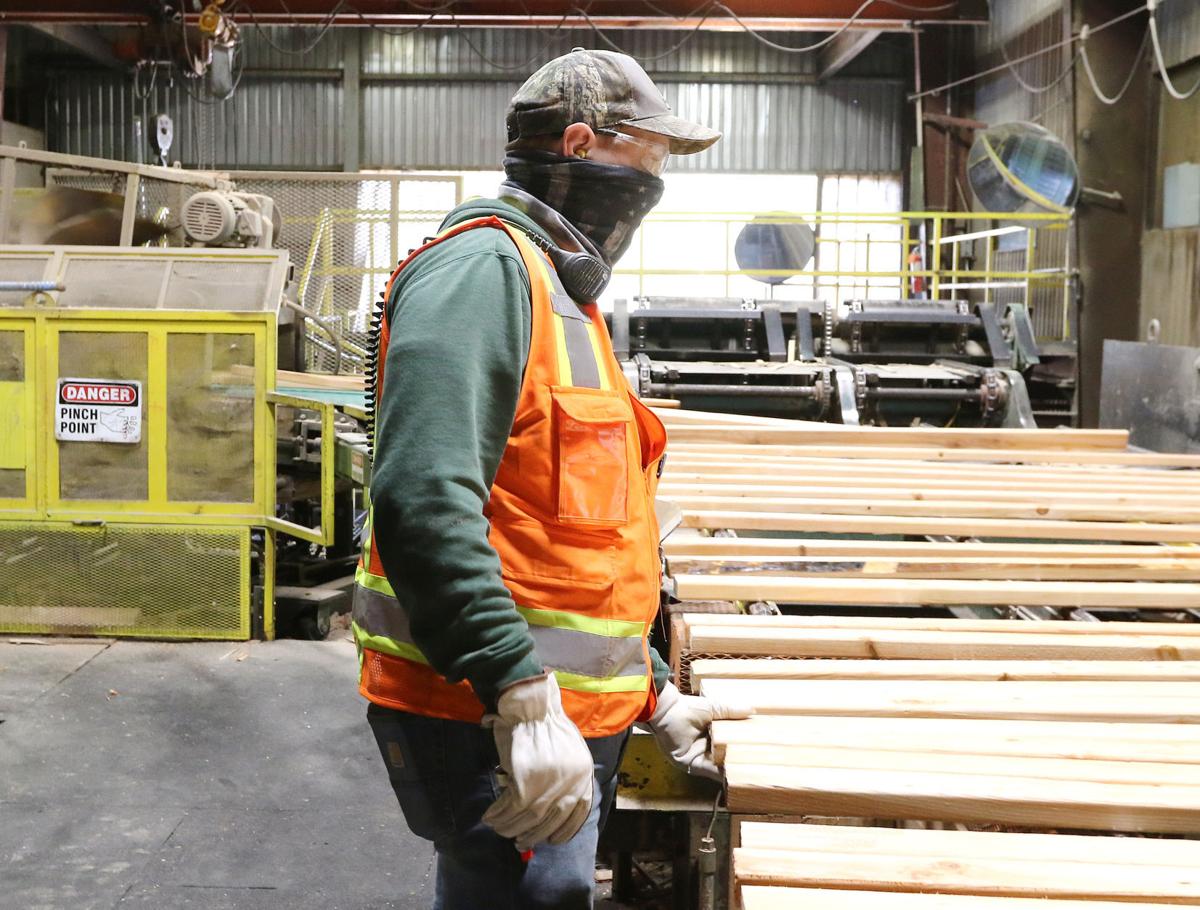 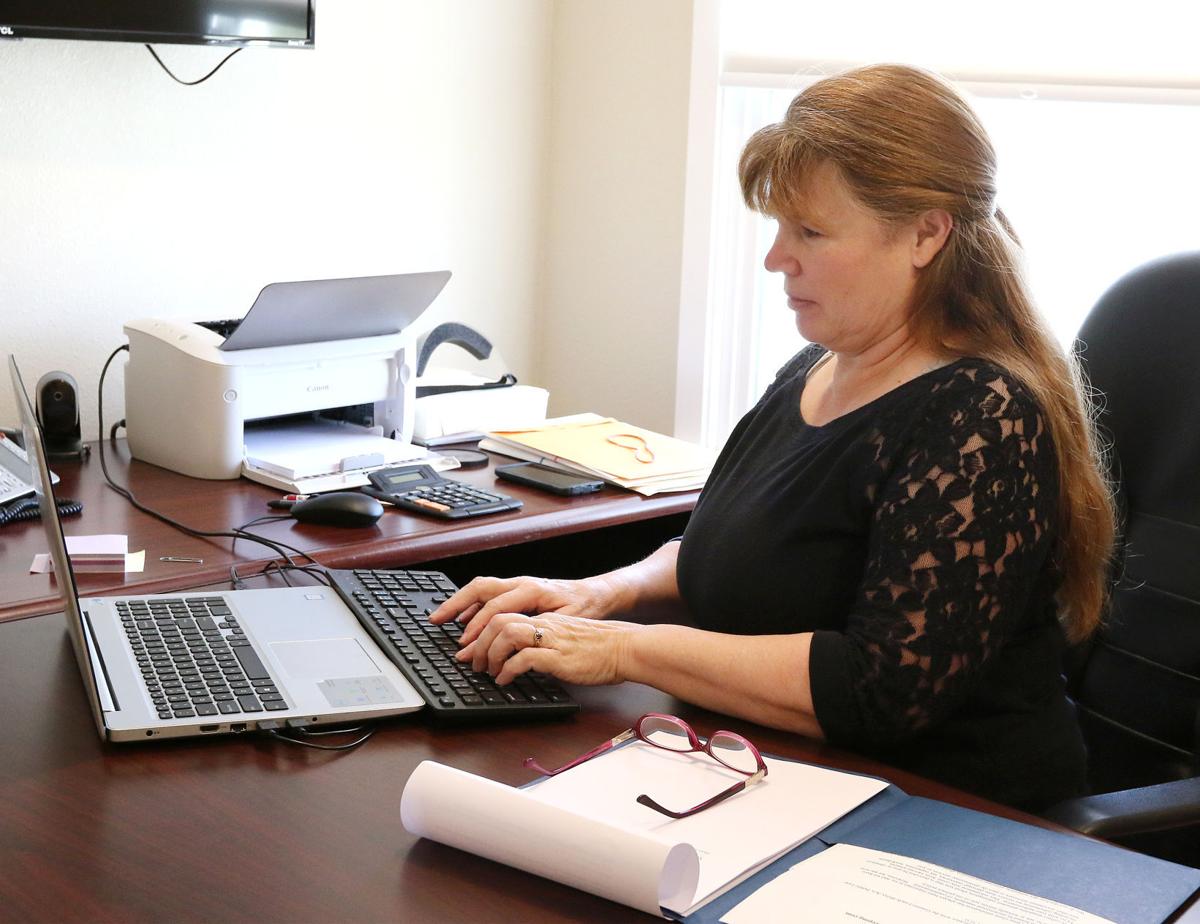 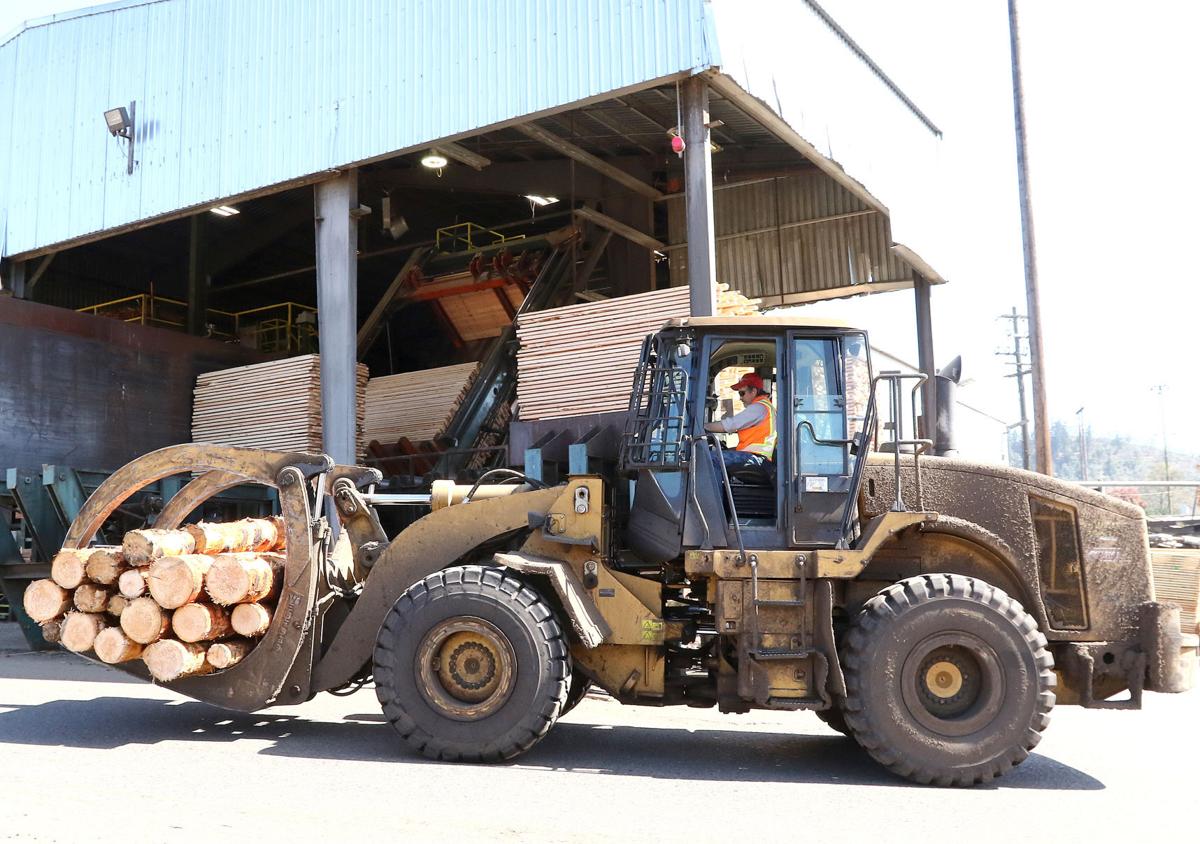 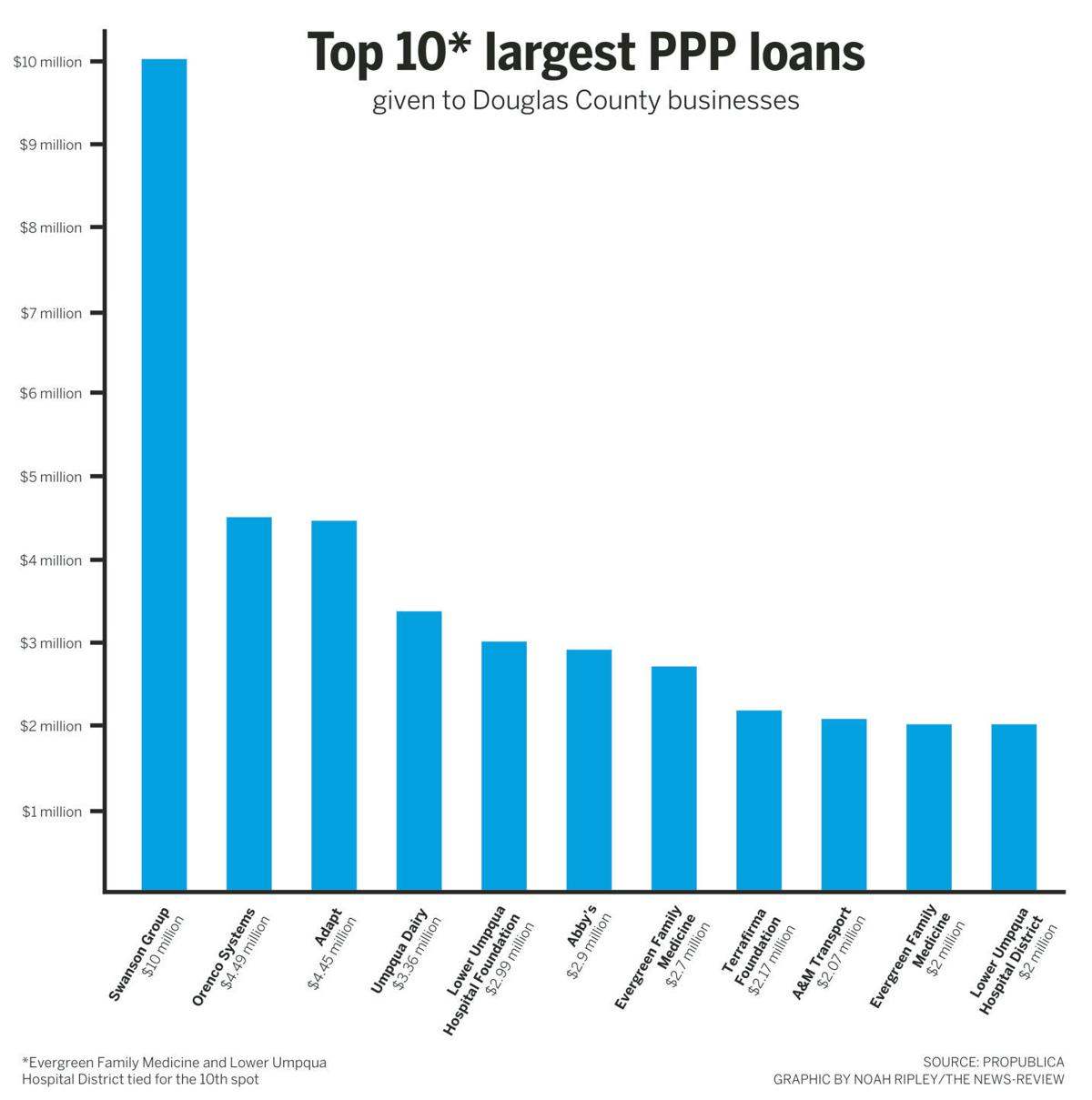 A total of 332 loans of at least $100,000 and many other loans for smaller amounts went to local businesses.

The biggest loan for a local business was for the maximum $10 million, received by Swanson Group. CEO and President Steve Swanson said that money allowed the business to reopen its Glendale plywood mill, which had closed when demand shut down in the early days of the pandemic.

The smallest PPP loan given in the county, for $188, went to Roseburg Tax and Bookkeeping.

Businesses applied for the loans through participating banks. If they met the criteria, their loans were then submitted to the federal Small Business Administration for approval. More than half the money, 60%, must be used directly for payroll. The rest could be used either for payroll or on rent or utilities. The point of the loan is to keep people employed and prevent businesses from closing, which would eliminate those jobs altogether.

Loans can be forgiven if employers meet certain criteria, according to the Small Business Administration, including not laying off any employees for a period ranging from eight to 24 weeks depending on the loan.

Some businesses received more than one loan. For example, Evergreen Family Medicine placed among the top 10 loans twice, in seventh place with a $2,696,900 loan and tied for tenth place with another $2 million loan.

The bulk of the loans went to businesses in the two Roseburg zip codes but even the county’s small towns raked in some dollars to help pay workers’ checks through the pandemic.

Elkton businesses received 18 PPP loans, the biggest to Double S Log for $208,259. In eight of the county’s 12 cities, the biggest loans went to timber industry recipients.

Huffman Wright Logging Co. received the biggest loans in both Canyonville and Myrtle Creek, with the two loans adding to just under $2 million.

Health care organizations also received some big loans. In addition to Evergreen, Adapt in Roseburg placed in the top 10 countywide. It received $4,448,400. So did Lower Umpqua Hospital Foundation in Reedsport, which received $2,995,100.

Top 10 recipients included Orenco Systems in Sutherlin, Umpqua Dairy Products in Roseburg, Abby’s in Roseburg, Terrafirma Foundation Repair in Roseburg and A&M Transport in Glendale. The loans for these businesses ranged from $2 to $4.5 million.

Swanson said all of the money Swanson Group received from the loan was used to pay the salaries for rank and file employees.

“As soon as we were certain of the loan, we rehired every single person that had been laid off at Glendale plywood and put them back to work in early May,” he said.

The company has 250 employees in Glendale and another 150 at its Roseburg stud mill. It has another 300 employees in Springfield.

When the pandemic hit, all of Swanson’s business “came grinding to a halt,” he said.

“We couldn’t get a plywood order for the conventional plywood that we make,” he said.

That’s why they shut the Glendale plywood mill down.

With the paycheck protection loan, they were able to restart and make more product.

In the bigger picture, thanks to the PPP program, many people were able to retain their jobs. A lot of them were working at home now, and they started looking around and realizing they wanted to improve their living spaces.

“There was a significant surge in do it yourself projects,” Swanson said.

And the big box stores like Lowe’s began ordering plywood. Eventually the housing market ticked up too as people living in apartments and condos decided they’d like to buy a home.

“That has created a significant surge in demand for forest products,” he said.

So the PPP program not only made it possible for Swanson employees to get back to work creating the product, it helped boost the demand so they had someplace to sell the products they’d made, Swanson said.

“The loan was key to our survival,” he said.

At the other end of the scale is Trina Shrum, owner of Roseburg Tax and Bookkeeping, who received the smallest PPP loan of $188.

Shrum had been working at a local accounting firm and decided to hang out her own shingle on Jan. 1, 2020.

Hindsight being, well, 2020, that turned out to be a perilous time to start a business. Two months later, the first local COVID-19 case would be diagnosed.

“I just thought, you know what, I don’t know what’s going to happen. So I’m going to go ahead and apply, and that’s what they sent me,” she said.

Like Swanson, she got her loan through Wells Fargo Bank. It was approved in May 2020.

Shrum operates a one-person business. With the loan, she was able to pay a little rent and pay the payroll tax when she temporarily hired her husband to answer calls.

This year, Shrum said she has more clients than she had before she went out on her own.

“I guess I’m a very optimistic person, so just having clients come in to meet with me and do their taxes number one was great. I probably could have gotten more if I had advertised and we didn’t have COVID, but for me it turned out fine,” she said.

Some loans went to restaurants that have suffered economic losses due to months of closed dining rooms and limited occupancy requirements.

Before the pandemic, business was going really well for Sam Gross, owner of the Logger’s Tap House pizza restaurant in Roseburg. So well that he was working on an expansion into Winston.

It’s pretty easy for customers to wrap their minds around the idea of takeout for pizza, so business has continued through the pandemic. But the mandated closure of the 200-seat dining room for many months, along with limited occupancy rules when the dining room has been allowed to open, has hurt.

People spend more money when they dine in, buying extras like drinks and desserts, Gross said.

Early in the pandemic, Gross had to lay off about half of his 45 employees. When the first loan came through, he was able to bring everyone back.

Gross applied for and received two PPP loans through Readycap Lending. Both loans were forgiven after he submitted documentation showing the money had all been used for payroll, he said.

Gross said he used 100% of the money on payroll.

The two loans combined are almost equal to the amount of 2020’s losses.

With limited occupancy now allowed, he said he has lines outside the door of people waiting for seats inside.

Then there’s the question of growth. No one’s in business to remain at status quo, he said.

If he hadn’t had the PPP funding to pay his payroll, he would have had to scrap the Winston expansion plan. Now, he’s moving forward with that project and plans to open in Winston in May.

Thank you Mike for reporting on information that our “professional” press should be reporting. Looks like it’s up to citizen journalists to keep us informed.

Citizens Against Tyranny are hypocrites! There is no other way to get around it. On the other hand glad to hear Swansons is up again in Glendale with the help of this social program.

[thumbup][thumbup]Mike, really appreciate your posts. It is great that you bring to light the companies that are there to receive help. So many are deserving of a boost but sadly there are also those greedy companies that gripe about socialism and then are first in line with both hands open to receive, receive, receive. We know who the hypocrites are!

On average, businesses who applied twice for PPP money, received over $18,000 per employee claimed.

Let’s be more specific about the PPP money received by only Douglas County businesses:

1. 1,227 Douglas County businesses received a total of $148,449,390 PPP money in year 2020. At least 128 of those businesses applied for a second PPP payment in year 2021 and have received an additional $24,185,330. There are probably many more businesses that received their second payment in February and March this year but it hasn’t yet been reflected in the reporting database.

5. Senator Dallas Heard’s business address received 2020 payments totaling $255,313 for four different businesses with the same address and has received an additional 2021 payment of $38,650 for one business so far. This does not include his real estate agent sister Lindsey Heard who received two payments totaling $18,810.

6. Loggers Tap House owner Sam Gross received a PPP payment of $181,800 on April 14, 2020 for the 24 employees he claimed. After announcing he was opening another Loggers location in Winston, Mr. Gross applied for and received a second PPP payment of $253,982 on February 2, 2021, but this time claimed 45 employees on his application.

7. Citizens for Tyranny fundraiser Backside Brewery received a PPP payment of $52,500 on April 28, 2020 for the 16 employees claimed. After announcing the opening of another Backside Brewery in Sutherlin, owners KC and Savannah McKillip applied for and received a second PPP payment of $39,177 on February 4, 2021, but this time claimed 25 employees on their application.

8. Omitted from the top 10 recipients list (probably because they are a huge N-R advertiser) was Citizens for Tyranny supporter and Myrtle Creek’s Ireland Trucking Company which filed six different PPP applications in 2020 all using the same business address and received six payments totaling $1,593,100 for the 205 employees they claimed.

9. Citizens for Tyranny Board Member Casey’s Family Restaurant received a PPP payment of $123,600 for the 23 employees claimed, despite being fined $5,000 for defying coronavirus restrictions.

11. Seven of eleven Citizens for Tyranny Board Members received PPP payments totaling $369,199. Seventeen other businesses that are listed as supporters of Citizens for Tyranny received PPP payments totaling $4,269,234. All of these businesses accepted large PPP coronavirus stimulus payments from the government, yet resisted and/or defied every coronavirus restriction imposed by that same government. What a bunch of hypocrites.

13. Contrary to the article, Huffman and Wright Logging Company received two payments totaling $2,058,348 (not under $2 million) for their 97 employees claimed.

Thanks Mike. There are those who don't hesitate to take advantage of "free money" from the Federal government believing their public tyranny is safe from being exposed as the most hypocritical. I'll post again that everyone should go read the Citizens Against Tyranny declaration. Clearly, all the folks you mentioned couldn't be more hypocritical: https://kcby.com/news/local/gallery/citizens-against-tyranny-claim-rights-are-being-infringed-on-by

Thank you for taking the time to resource and report 'the rest of the story', Mike.