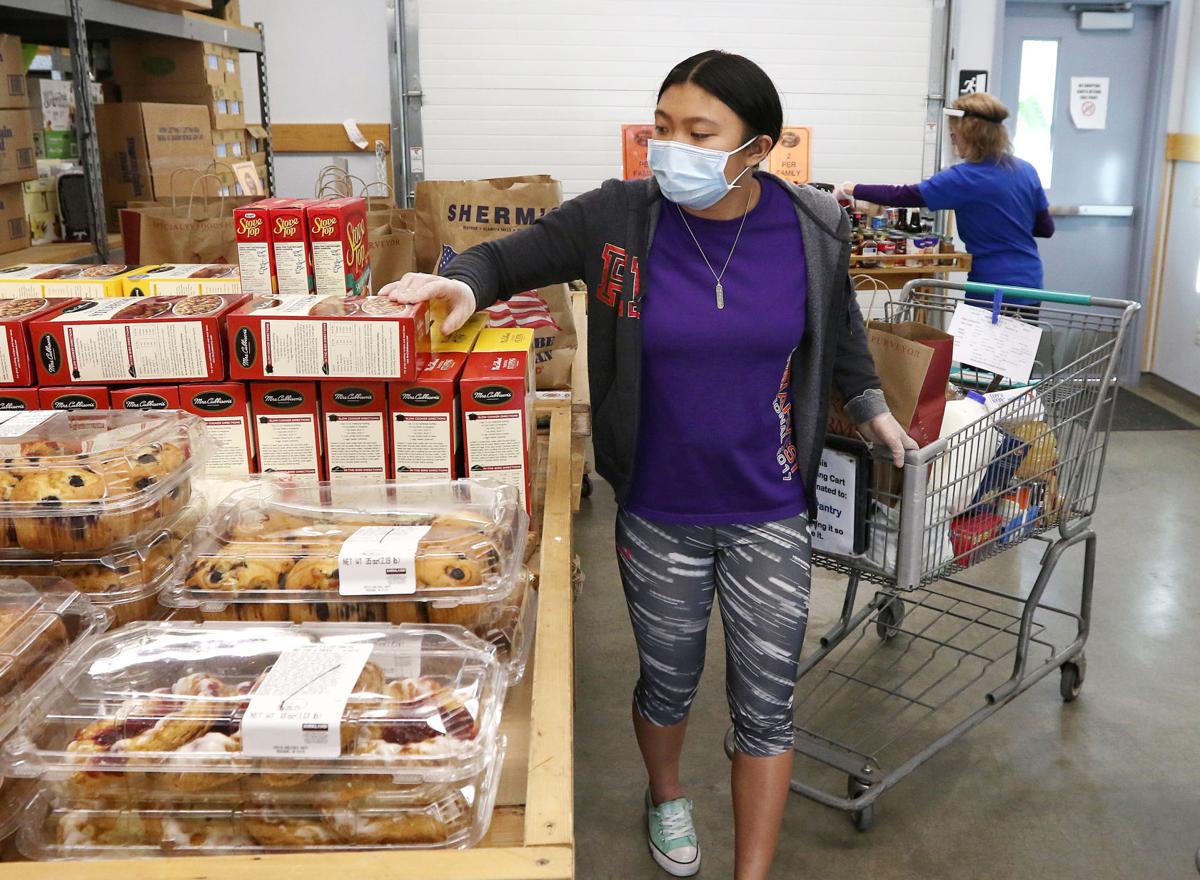 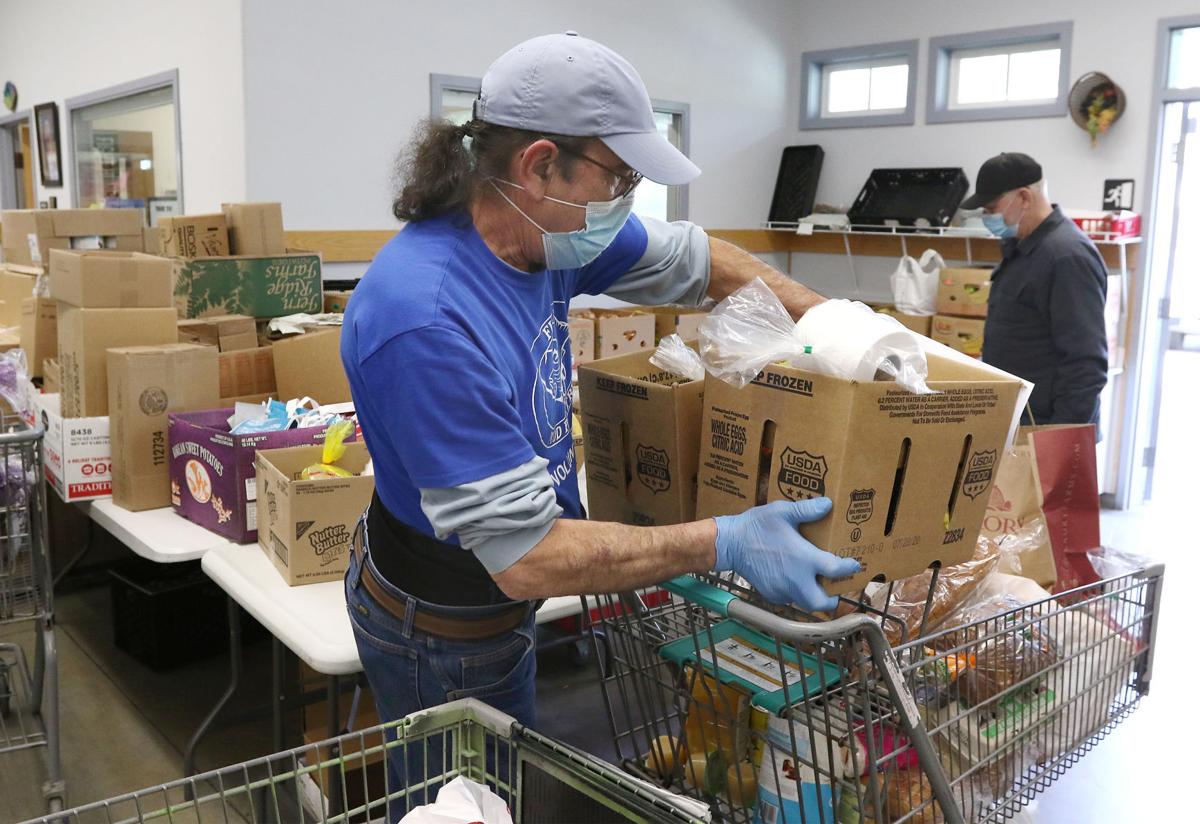 Volunteer Jeff Havener organizes food for a visitor at FISH Food Pantry on Wednesday in Roseburg. Although some areas have seen big runs on pantries during the coronavirus pandemic, that hasn’t been the case in Douglas County, where shelves are burdened with dietary options. 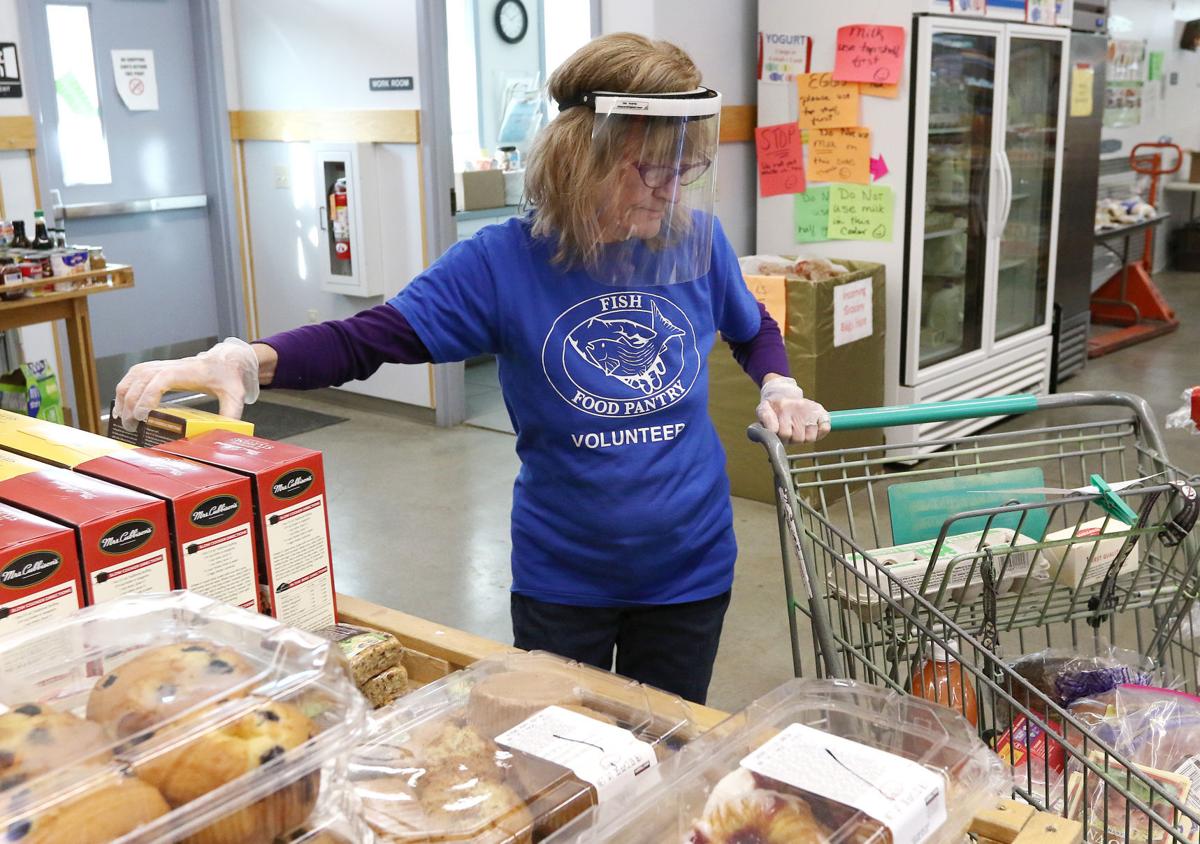 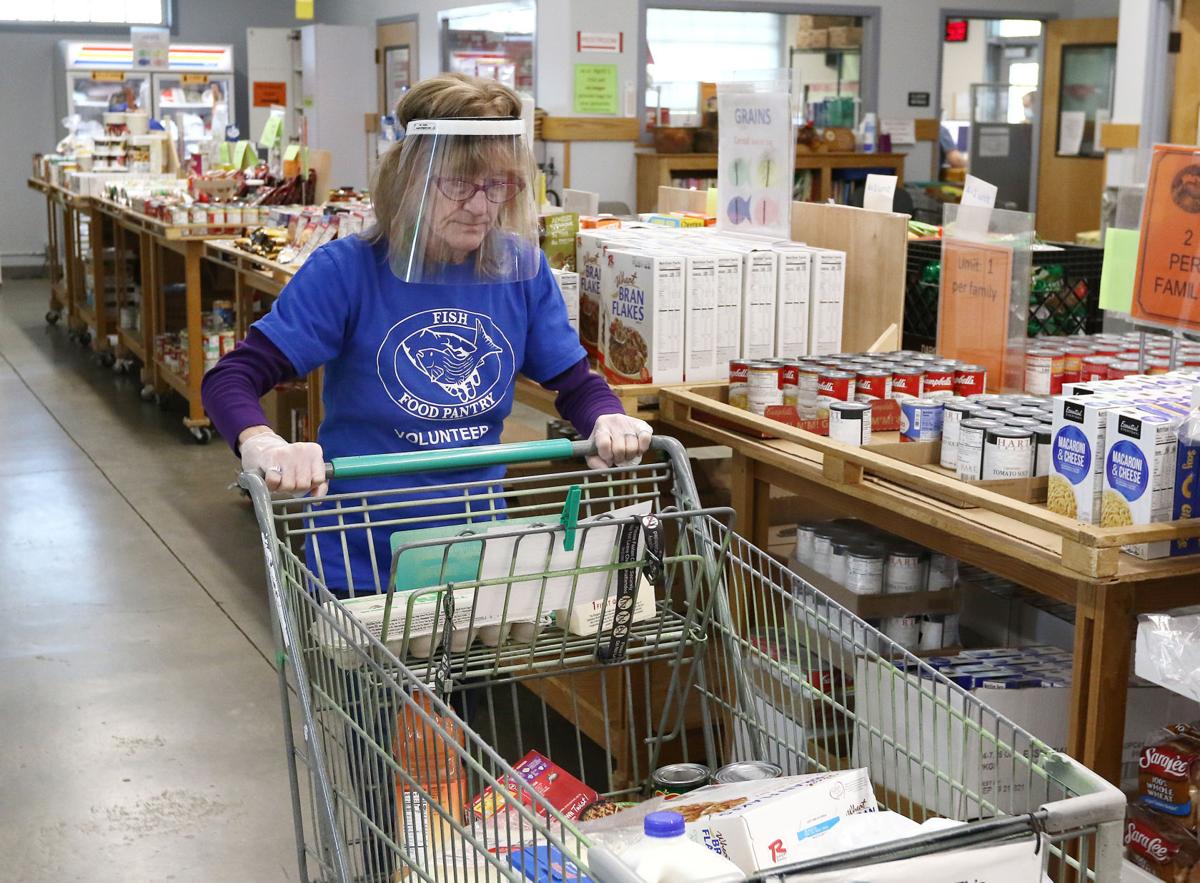 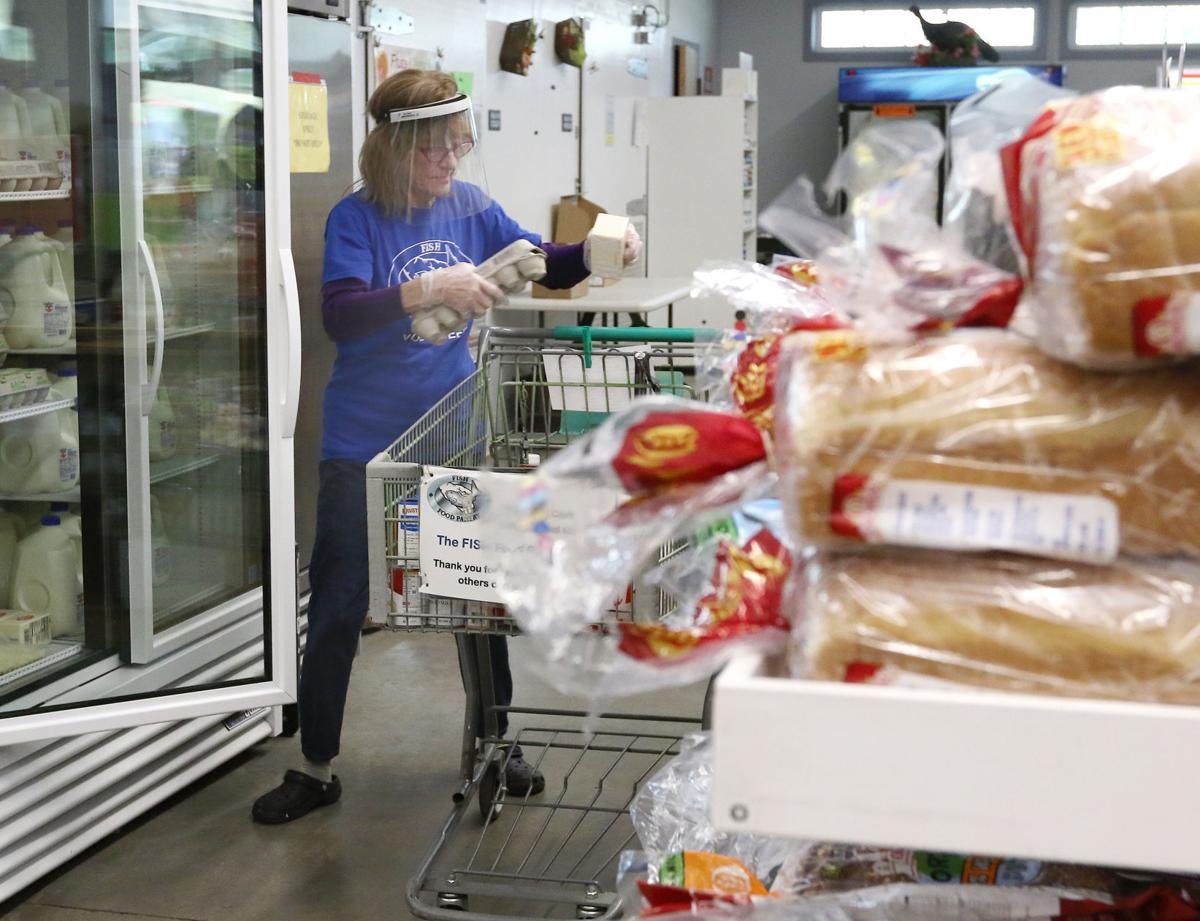 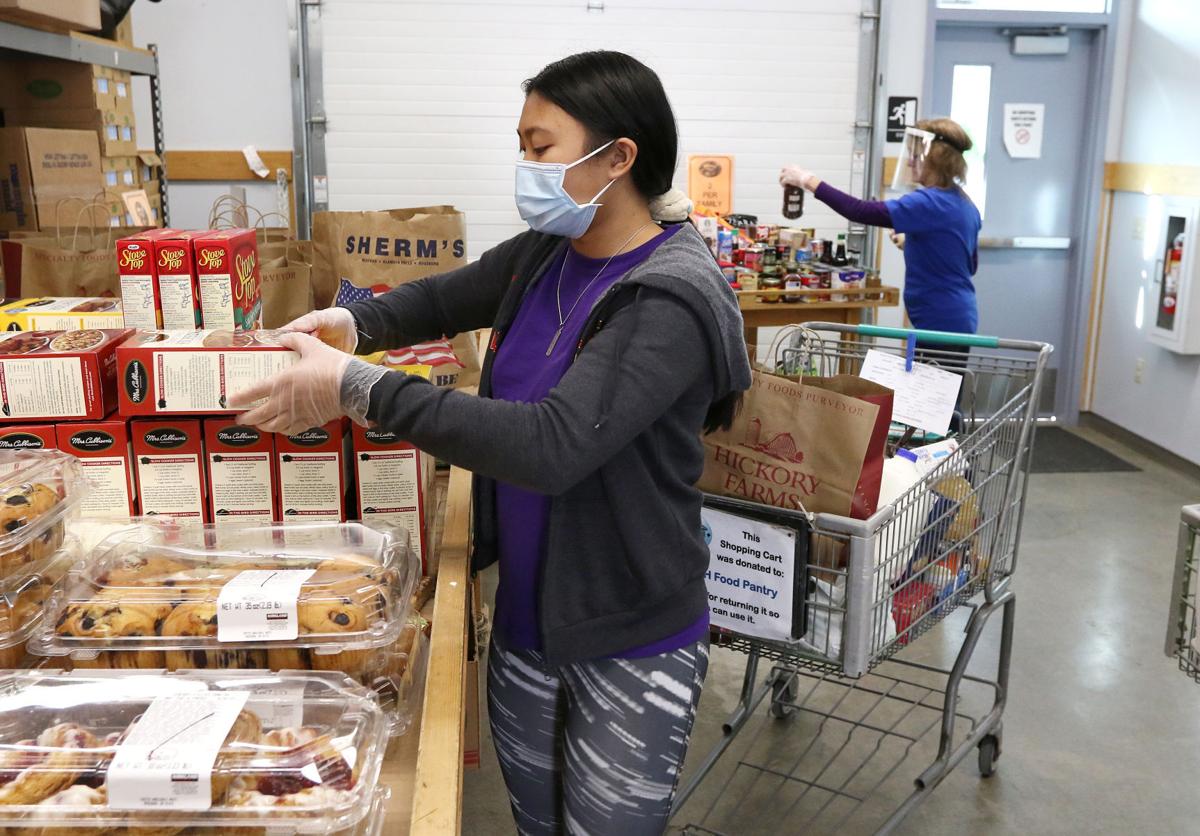 Volunteer Jeff Havener organizes food for a visitor at FISH Food Pantry on Wednesday in Roseburg. Although some areas have seen big runs on pantries during the coronavirus pandemic, that hasn’t been the case in Douglas County, where shelves are burdened with dietary options.

The FISH Food Pantry in Roseburg is bursting with donated food, but it’s having trouble giving it all away.

While the need has dropped at FISH, it’s remained flat overall across most food pantries in the county, said Sarah McGregor, manager of Feeding Umpqua, a program of the United Community Action Network that operates a food bank supplying food to those pantries.

“There’s so many places where food insecurity has been high and there’s been like this run on food pantries, and here we’re fairly stable,” she said. “We’re pretty much exactly where we would be at this time of year.”

And it means that the county has about a 14.7% level of food insecurity.

“I don’t want people to think there’s not a need because it didn’t go crazy with COVID. It’s still over 15,000 people a month are getting emergency food. It’s not like it’s not a big deal because COVID didn’t knock it out of the park,” McGregor said.

McGregor said she suspects the stable demand may be due to the increase in federal help for those struggling during the pandemic. Supplemental Nutrition Assistance Program benefits have been boosted and unemployment and other benefits have also been available.

“One of the best ways to fight hunger is to advocate for people to get SNAP benefits if they need more money for food,” McGregor said.

Rent payments have also been deferred, and that may be another reason why people haven’t been rushing to the food pantries. But that has McGregor worried for the long term.

Eventually, she said, that rent’s going to have to be paid and people could really be in trouble. The spike food pantries are not seeing now might turn up when the rent comes due.

“We’re kind of waiting for the other shoe to drop here,” she said.

Another factor could be that the tourism industry accounts for a relatively small portion of Douglas County jobs, McGregor said. It’s those jobs that have been hardest hit during the pandemic.

Those who work on farms, at lumber mills or at health care jobs are still working.

FISH Food Pantry Executive Director Kim Jasper said many people don’t want to rely on the food pantry system if they have money to go out and buy their own food.

The pantry usually sees a minimum of 1,800 families each month and it’s barely hitting 300 a month now.

“It’s a dramatic change,” she said.

But Jasper said people with a history of needing extra assistance should continue to go there and save their money for emergencies and rent.

“We have so much food to give. We have so many donations that are coming in. People want to help,” she said.

Jasper also wonders if some of the dip in demand comes from fears about COVID-19.

She said the pantry has adapted for the pandemic. Instead of grocery style shopping, clients are waiting outside and being served one at a time. They’re asked what they need and the food is packed for them and brought out.

Jasper also worries about what happens when people suddenly have to pay the rent they’ve been putting off.

“I’m certain it’s going to hit and we are going to get slammed,” she said.

One exception to the overall decrease in need has been in the four rural communities served by the mobile pantry, the Outpost, operated by Feeding Umpqua. It served 290 people in Elkton, Days Creek, Camas Valley and Diamond Lake in December, up from 161 a year ago.

But the most dramatic exception to the rule has been Reedsport, where Project Blessing Food Pantry in Reedsport has seen a spike in need throughout the pandemic.

Project Blessing Executive Director Susan Martin said the pantry has seen a 38% increase in need that’s held throughout the pandemic.

“So I mean it’s not just up a little bit. It’s up a significant amount for us,” she said.

She believes the difference is that many jobs in Reedsport are in the tourism industry, which has faced a combination of shutdowns and decreased demand during the pandemic.

The pantry serves between 1,800 and 2,000 people a year in an area between the county borders near the coast and inland to Scottsburg, an area with 18 to 20% food insecurity. About one third of those customers come only once a year.

Project Blessing uses a different model for delivering food to their clients than most pantries. It’s based on the idea that the amount of food available to fill the need is abundant and their job is to supply that food and let clients take what they need. There’s no limit on how many times a family can come to the pantry, or how much they take.

In 2020, with a pandemic raging, the pantry distributed an additional 65,000 pounds of food.

The food comes from food banks and also from the extra food that grocery stores can’t sell and would otherwise throw out.

The pantry has continued to innovate during the pandemic. In addition to adding social distancing, cleaning protocols and temperature checks at the pantry, it now has new ways to assist people in need.

Now people unable to secure transportation can use Dial-a-Ride to get to the pantry. People with mobility challenges can get food delivered.

The pantry has also worked with Douglas Public Health Network to ensure that people quarantining in the Reedsport area are receiving the food they need.

Martin doesn’t expect the demand for food at her pantry to decrease any time soon.

“We are preparing for another year of this,” she said.

From what I understand this has been an issue pretty soon the change in food stamps. Many people who got very few SNAP benefits were probably supplementing their food budget by going to a food pantry. When they went up to the full amount allowed for your household size, the money like resources available for food could have increased by hundreds of dollars. This would remove the need to rely upon other food sources.

This seems to be in stark contrast to some other areas. So the simple answer is probably not the full picture regarding why.

Some low income families have been getting and influx of food benefit on SNAP.