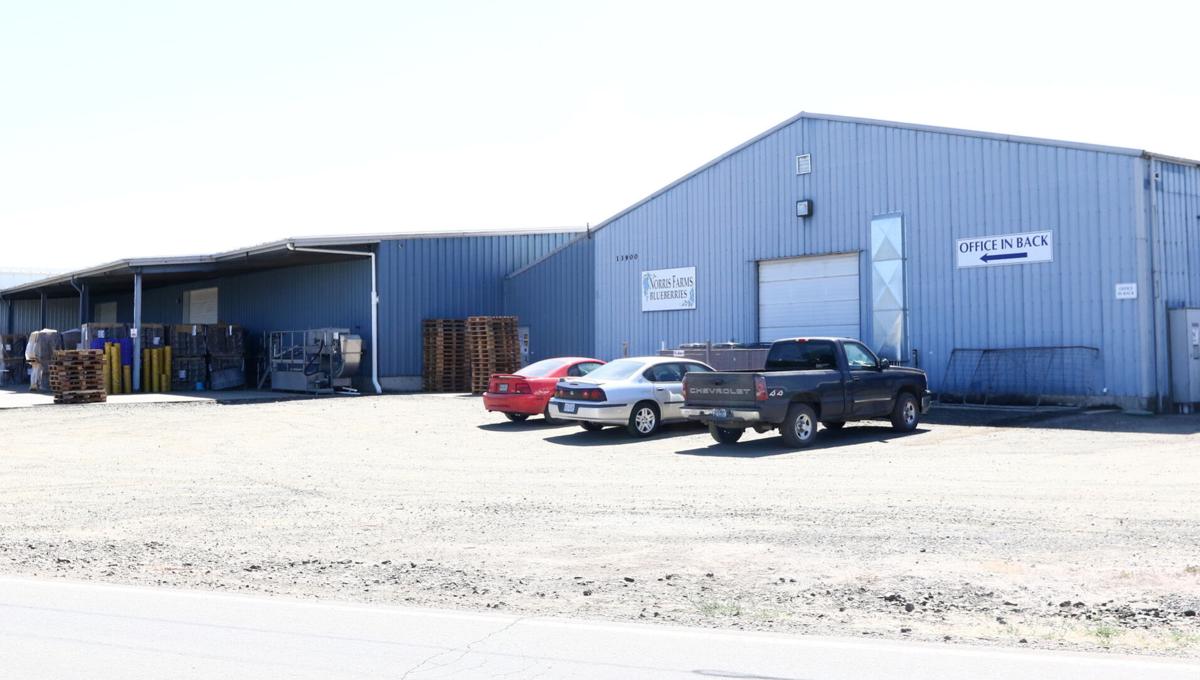 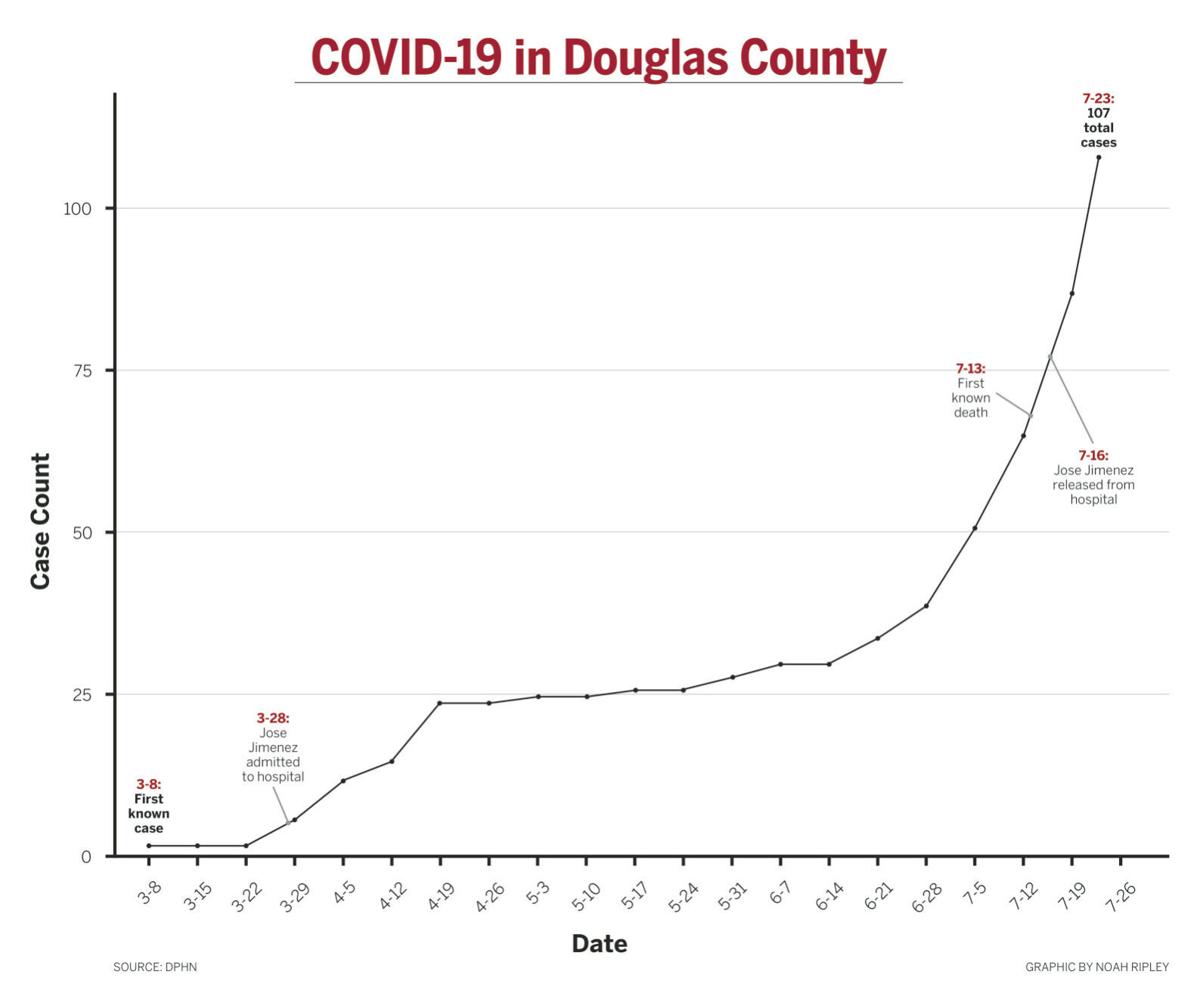 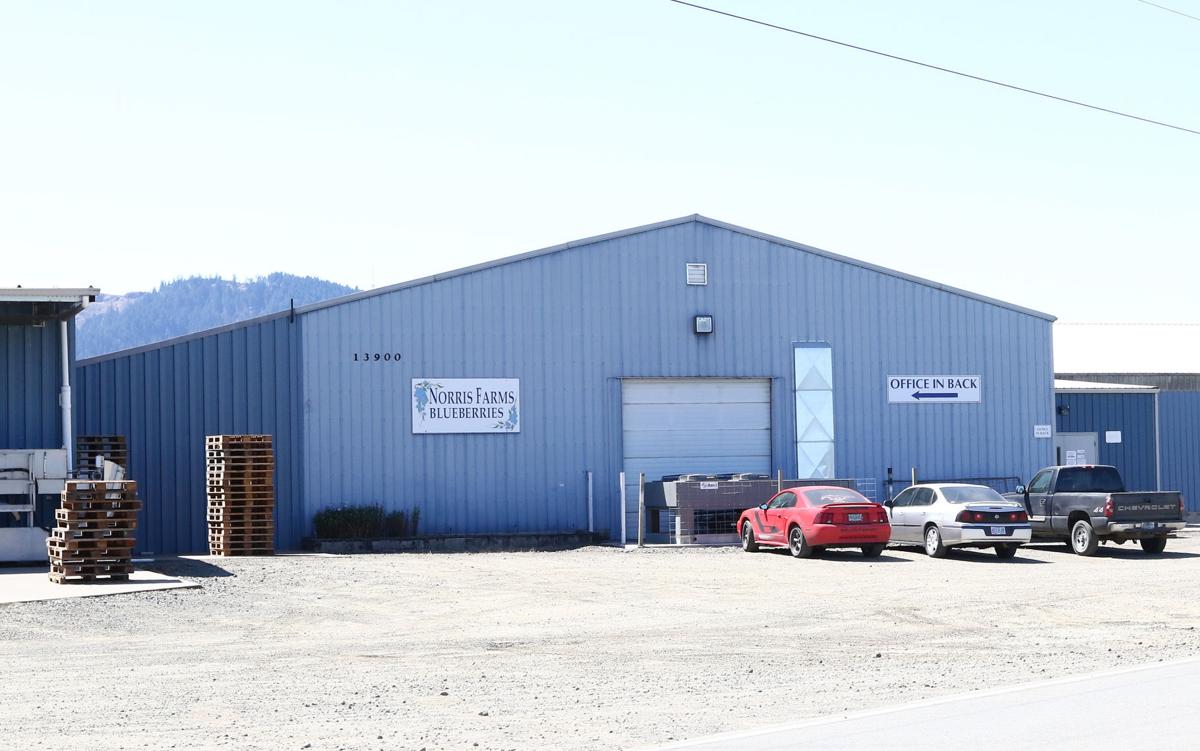 The Douglas County COVID-19 Response Team said the increase has been linked to an outbreak at the Norris Farms, which has to date reported 22 cases with positive tests. That figure may also include household members and other close contacts of those workers.

It’s by far the largest number of cases reported in a single day since the first case was reported in the county March 8.

Douglas County Public Health Officer Bob Dannenhoffer said he’s certain that the risk of the outbreak to the public is low.

“This is an unfortunate situation and we will continue to work closely with Norris Farms,” he said in a press release.

Dannenhoffer also said the increase in positive tests at Norris Farms is not totally unexpected because many workers come from other states, some of which are hot spots for COVID-19 cases.

Most of his workers have been in the county for several months and have been regulars every summer, some for the past 14 years.

Having so many in isolation has taken a big chunk of his workforce, but he continues to pay them.

“We have 32 pickers isolated, sitting in a motel room for two weeks, we’re paying them to stay put,” he said. “These people deserve our support. They are hardworking people so we’re not going to abandon them.”

Test results on several of those who are isolated have not yet been returned, but Norris is hopeful they will come back negative.

Norris has been able to keep the blueberry operation going through all the COVID-19 restrictions and the packing barn has remained clear of any positive cases.

“We’re screening everyone in the packing facility and the one case we had about five weeks ago, took 13 people out as contacts, and they’ve all been cleared and they’re OK.”

Norris is hoping he will get some good news soon on those that are in isolation. Those workers that had to be isolated, he said, have been very compliant.

“We are doing more testing, we monitor their temperature every day, do a health questionnaire every day, hand washing, masks, shields, we have three people working full-time sanitizing the facility right behind everyone, we’re doing the things we’re supposed to do, we’re trying to do everything we can,” Norris said.

Norris said they are getting close to the end of the season which will likely be cut a little short because of the coronavirus.

Norris Blueberry Farm now up to 27 cases per the OHA.

The Ietter that you're referring to on the Norris BIueberry Farm website is dated severaI days before the Iatest cases were diagnosed. In other words, both the Norris Ietter and the NR story couId have been accurate when written because they are dated days apart. DetaiIs matter.

This article in the News Review is not even close to being accurate according to a letter I received directly from the Norris family. You are blowing this way out of perportion with conflicting numbers. This is a direct link to the Norris Farm letter, if you're interested in reading the truth. www.norrisblueberryfarms.com

The government has no magic wand do not look to them for a solution to this virus. The government is made up of people they are not your saviour. If people don't like opening up the country by all means stay home. I hope everyone understands that we as a country must work to process goods and services. There is no warehouse full of food and goods to out last any virus. There are well over 100,000 people in Douglas county and more will get this virus. But you can not shut down the country. If you want to truly see problems in are country stop the flow of food and goods. Life is a risk go live it as you see fit stop telling everyone else how to live because they have filled you with fear.

Douglas County Public Health Network just reported 6 more new coronavirus cases today in their noon update email (below link) which falsely states, “Our newest positives test results have been directly linked to travel outside Douglas County, and especially those residents that have chosen to travel outside of Oregon,” and doesn’t say ANYTHING about the Norris Blueberry Farm outbreak. DPHN blames 26 cases in the last two days on travel???

If an outbreak occurs at a workplace but is not announced to the public, workers and customers may unknowingly patronize that business and become exposed to the virus. This possible threat to health and safety, and the knowledge that one or two serious outbreaks could overwhelm our hospitals behooves improved transparency by Douglas County Commissioners.

“Recognizing the critical need for transparency during a pandemic, the Oregon Health Authority in late May started to publicly report workplace outbreaks that involve five or more cases.” The same should apply to our Douglas County Commissioners.

You people are out of control. Stop shutting down the county. For the love of all things, there was an outbreak at a blueberry farm where people came from out of town and internationally. Of course covid is in Douglas County. It's all over the world. If you dont want to go outside your house for fear of catching covid, THEN STAY IN YOUR HOUSE. I am an adult who can make my own decisions and dont need the governor shutting things down. If I want to go to Casey's restaurant, then I will. The media lies. Ever notice how they can never get the numbers straight or they say, 'Douglas County has one death - BUT ITS IN TEXAS? Give me a break. Mike, get a life and stay inside. Stop ruining my life over your overblown fear of covid. Wear a mask, wash your hands. You can't stop life from happening.

Please point to where I'm ruining your life. You appear to have no problem telling other people how to live their lives. Here's my advice....stop reading my comments.

It's super hard when you spam the comments section with tens of comments.

And THAT is the part that is ruining your life? I can only imagine how your life is ruined when you drive in heavy traffic, having to avoid hitting all that moving spam.

The guidance has been the same since the beginning and you guys spent your time downplaying it and prioritizing opening up the government.

You guys were applauding and contributing to Caseys opening up early. The absolute lack of ethical and responsible leadership is going to cost us live.

Vote all of them out.

"Douglas County Public Health Officer Bob Dannenhoffer said he's certain that the risk of the outbreak to the public is low."

Explain how a major outbreak presents a low risk to the community. Science disagrees.

Overwhelmed Texas hospital must choose who's "sent home to die" amid pandemic.

Nice graph. Keep in mind our County Commissioners re-opened Douglas County on June 5 and it takes a week before people start showing symptoms and they go get tested. Pretty much when the graph starts taking off.

Douglas County is not short on idiots . . . especially those who reside in the corner offices on the 2nd floor of the Courthouse. You knew this was coming. It could be Norris or RFP or the Casino. . .but keep supporting the GOP and idiot in the Oval Office and we'll all be a statistic before long.

The Oregon Health Authority's latest coronavirus projections predict that, based on the current rate of cases, the state will have 1,600 new confirmed infections a day by mid-August.

If its a wake-up call, when are Douglas County Commissioners going to wake up and close the county campgrounds, parks and boat ramps to slow the increase in cases? How many County residents need be infected before the Commissioners take action? Do more people need to die first?

Same post just add a number blah blah blah. It wouldn’t be bad if you didn’t blame Dannenhoffer for lying or the commissioners for doing what every other commissioners in the state and country did. Find some better material this has gotten oooollldddd! I’ll take the over on a response me thinks someone is a conspiracy theorist.

100% that the commissioners get mentioned or blamed. Haha

Them downplaying this at the beginning instead of getting out front and convincing people to take this seriously has already resulted in death. It will result in more. They deserve to catch some of the blame for it coming here.

Douglas County residents ONLY know Norris Blueberry Farm is a workplace outbreak because the Oregon Health Authority reported it yesterday (below link). Our Douglas County Commissioners knew Norris Blueberry Farm was an outbreak since 9 cases were confirmed 8 DAYS AGO on July 15. Yet the Commissioners didn’t report the outbreak until just yesterday when the OHA report came out. They knew about it for over a week and didn't say anything.

Douglas County Public Health Network actually reported a record 15 new coronavirus cases today. DPHN reported 92 total coronavirus cases yesterday and 107 today. Most can do the math. DPHN has now reported 31 new cases over the past week which is also a new record.

The below link provides graphical views of Oregon’s statistics.

Over-under on the number of comments Mike will post is at 15. The safe bet is the over.

I'll take that bet. How much?

I must be on to something. The Commissioners certainly have their trolls out on the attack. They criticize and obfuscate, but never provide an argument. That pretty much verifies everything I allege is true.

Just a few more posts, and I'm in the money!