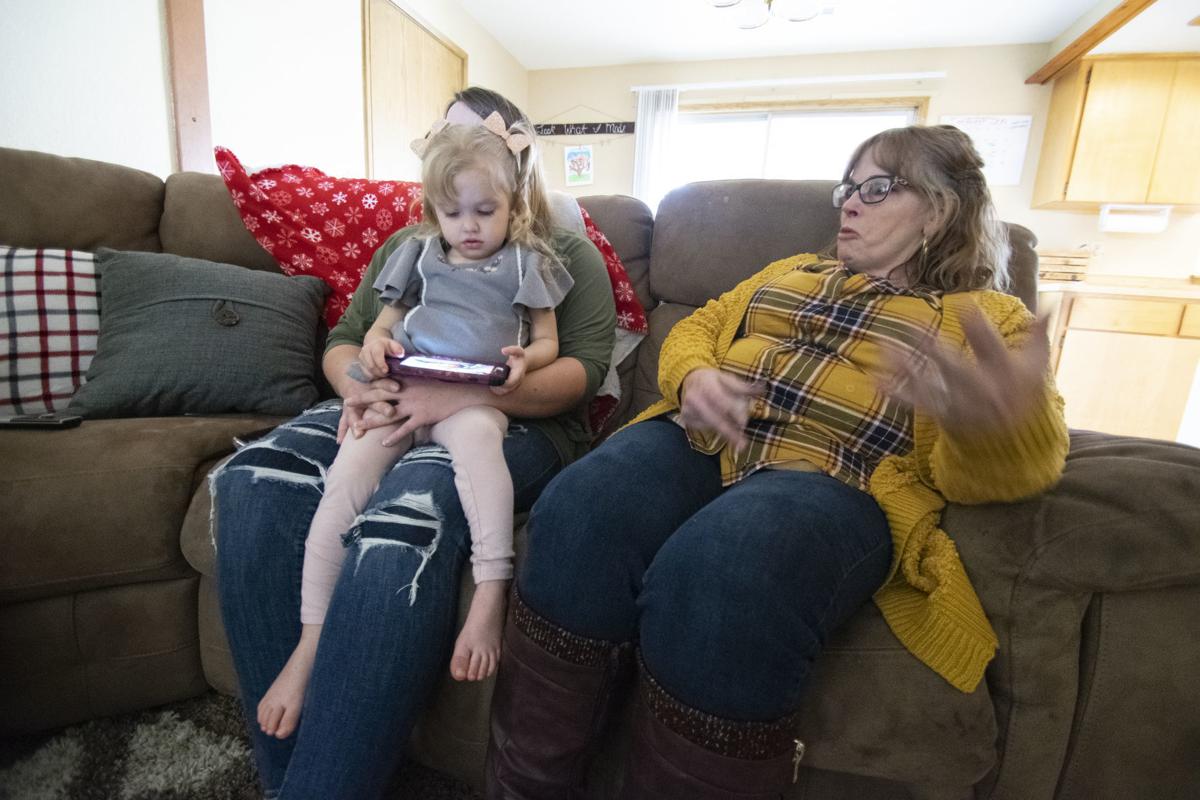 Cathy Sanders talks about her granddaughter, Elizabeth Woods, as she sits on the lap of her mother, Holly Sanders, this past week in Winston. 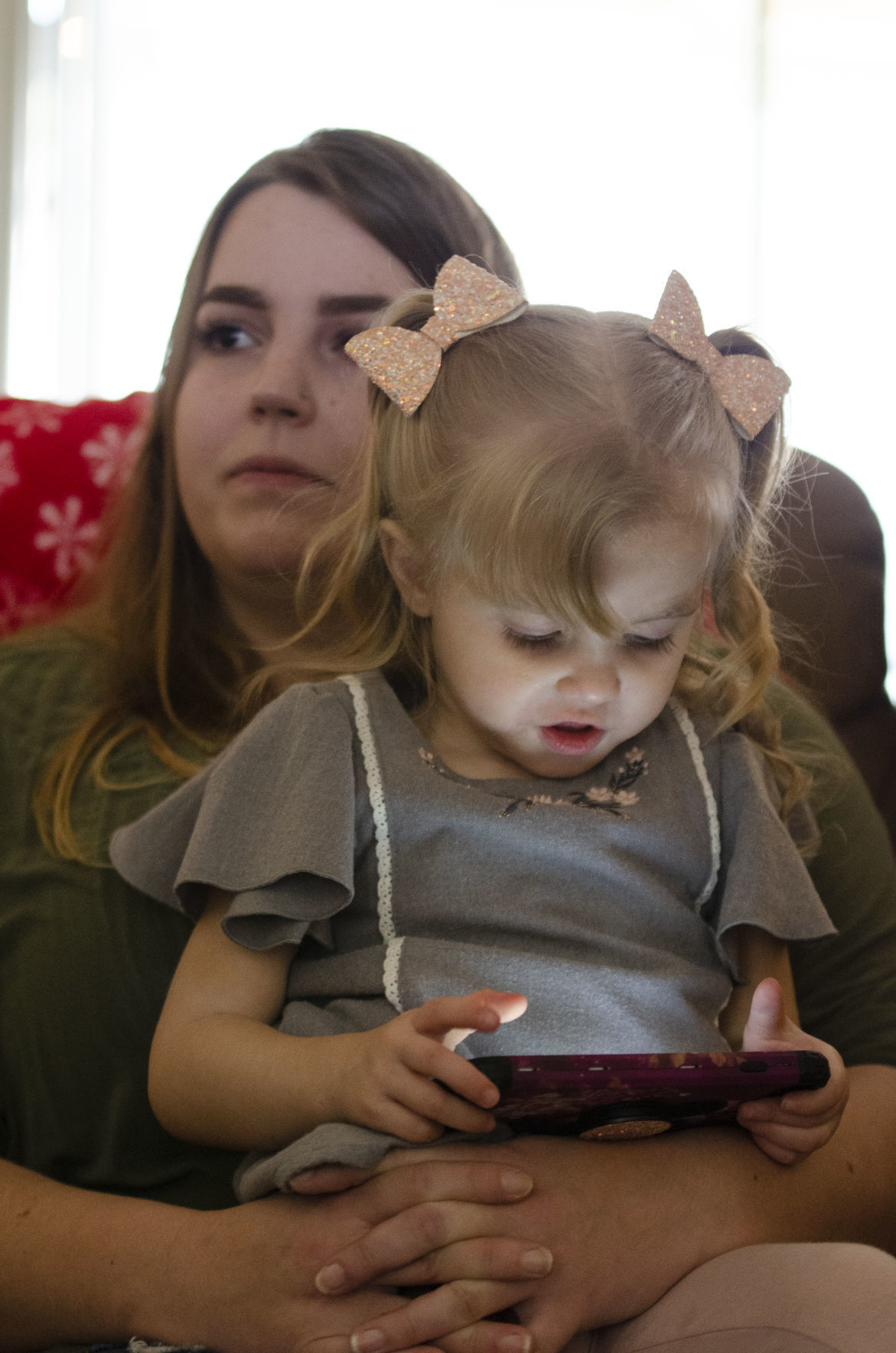 Elizabeth Woods plays a game on a mobile device while sitting on the lap of her mother, Holly Sanders, this past week at their home in Winston. Woods has been diagnosed with an inoperable brain tumor. 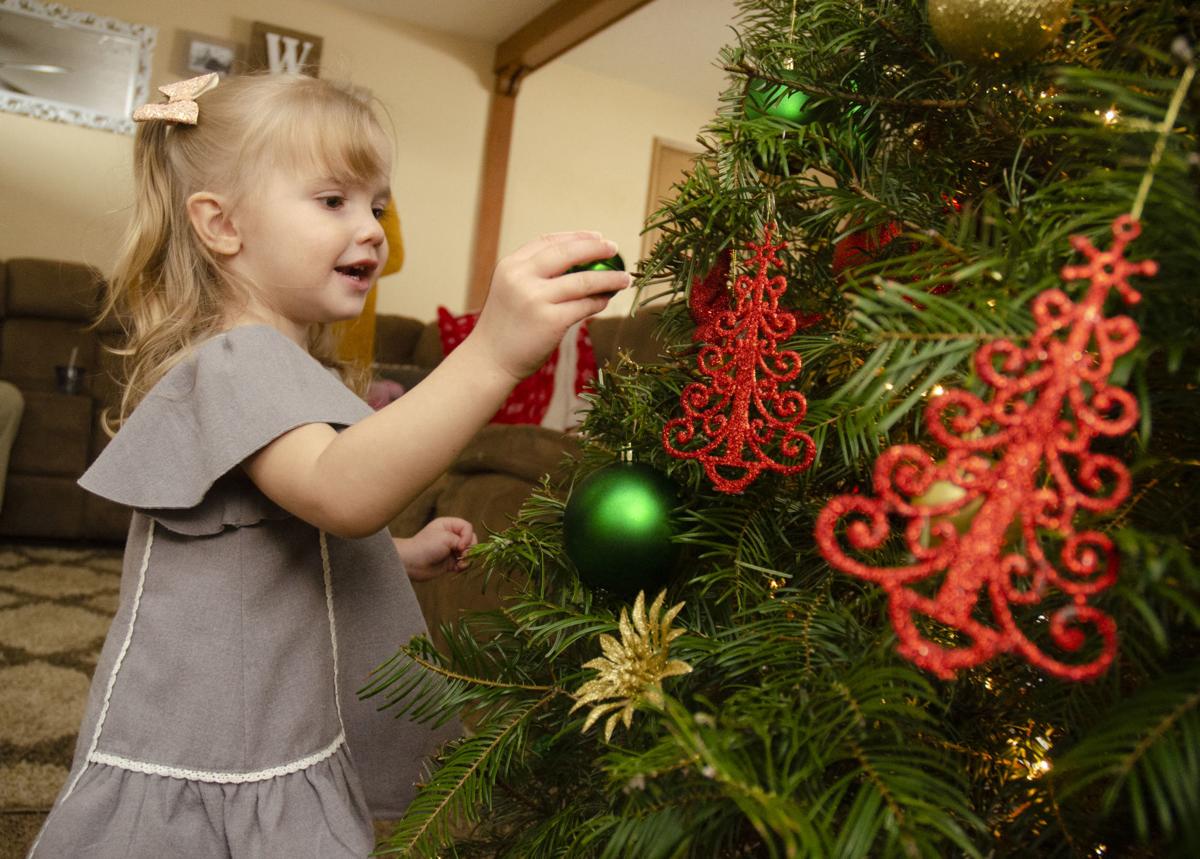 Elizabeth Woods, 2, puts an ornament on her family’s Christmas tree at their home in Winston on Wednesday. Woods has an inoperable brain tumor, which forces her family to make weekly drives to Portland for chemotherapy treatments. 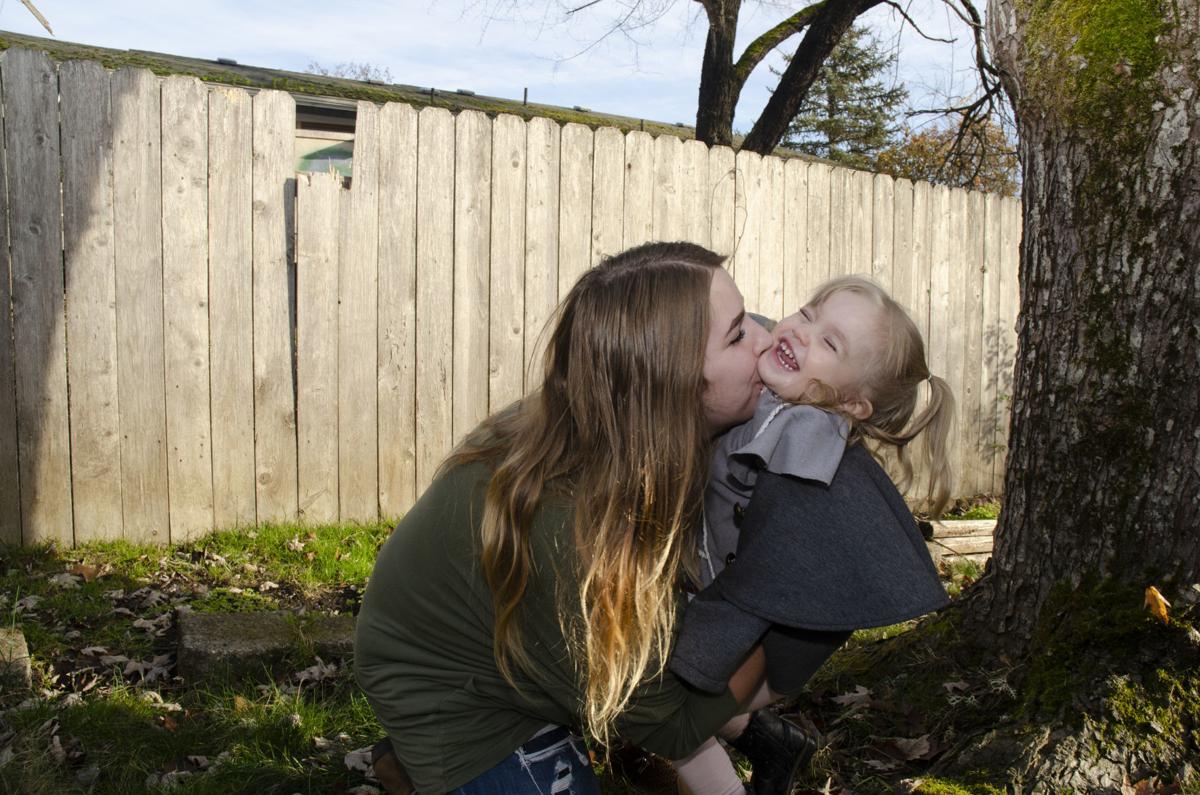 Holly Sanders takes time to play with her daughter, 2-year-old Elizabeth Woods, in the back yard of their home in Winston this past week. Woods has a rare brain tumor that is inoperable, leaving her family to make weekly drives to Portland for chemotherapy treatments.

Cathy Sanders talks about her granddaughter, Elizabeth Woods, as she sits on the lap of her mother, Holly Sanders, this past week in Winston.

Elizabeth Woods plays a game on a mobile device while sitting on the lap of her mother, Holly Sanders, this past week at their home in Winston. Woods has been diagnosed with an inoperable brain tumor.

Elizabeth Woods, 2, puts an ornament on her family’s Christmas tree at their home in Winston on Wednesday. Woods has an inoperable brain tumor, which forces her family to make weekly drives to Portland for chemotherapy treatments.

Holly Sanders takes time to play with her daughter, 2-year-old Elizabeth Woods, in the back yard of their home in Winston this past week. Woods has a rare brain tumor that is inoperable, leaving her family to make weekly drives to Portland for chemotherapy treatments.

Ganglioglioma is very rare, but 2-year-old Elizabeth Woods, of Winston, was diagnosed in April with an inoperable, low-grade ganglioglioma tumor. Because of its location on the brain, doctors can’t operate on it, so Elizabeth has to go to Portland once a week for chemotherapy.

That’s pretty tough on a 2 year old, but other than favoring her left side and having a hard time vocalizing her words, you wouldn’t notice anything was wrong with the bouncy, energetic and active toddler. And that was part of the problem in getting the tumor diagnosed.

When Elizabeth was 6 months old, her mother Holly Sanders, 23, of Winston, was seeing signs that something was amiss. At 3 months old, Elizabeth been life-flighted to Doernbecher Children’s Hospital in Portland, after she was diagnosed at Mercy Medical Center in Roseburg for a possible tumor in her neck. Mercy contacted Doernbecher, but doctors at Doernbecher wouldn’t do any imaging. They told the family that Elizabeth had cerebral palsy and it wouldn’t show up on the MRI until she was 2 years old.

“Because they were confident enough that it was not a tumor, they didn’t scan her,” said Elizabeth’s grandmother, Cathy Sanders. “Mercy was the first one that ever said tumor.”

But the doctors at Doernbecher didn’t agree and stood firmly with their diagnosis of cerebral palsy. Holly Sanders and her husband Hunter Woods started taking Elizabeth to different doctors and got several different opinions. One doctor thought one leg was longer than the other and that was causing her balance problem. Another thought she had gas.

“Everybody kept giving me a different answer and I didn’t want to stop,” Holly Sanders said.

So finally Elizabeth got an MRI in April, three months before her second birthday, and it only happened then because of a mix-up. Doctors wanted to wait until October to do the scan, but there was a glitch in scheduling and Elizabeth got in earlier in late March.

Doctors were stunned at what they found.

“The neurologist from Doernbecher called me, panicking, saying we needed to drive to Portland the next morning, and that she (Elizabeth) had a tumor and and she had maybe five years to live,” Holly Sanders said. “I didn’t understand anything he told me after that, I apparently blacked out.”

The parents had been expecting to hear about the cerebral palsy diagnosis, but instead were jolted by news of a life-threatening brain tumor.

The doctors told them the tumor is deep in the thalamus area of the brain that controls the motor functions and one of the issues is that the tumor is so deep that just a small portion sticks out of the thamalus, so doctors have not been able to obtain a good biopsy to find out what kind of cells might be in the tumor and that makes it tougher to treat.

“Doernbecher’s is not wanting to perform surgery (on the tumor) because they believe it will paralyze her if they try to do surgery,” Holly Sanders said.

So the chemotherapy treatment is being used and Elizabeth will be on chemo for a year, then off for six months and then go back on for a year. The treatment will continue until she reaches an age where they can safely do radiation.

“They don’t like to do it under five because it’s too much for their little bodies,” Holly Sanders said.

Most of the time, people don’t even realize anything is wrong with Elizabeth, but occasionally she will experience bursts of pain.

“When she’s in pain she screams, and I was in Fred Meyer one time when she screamed,” Holly Sanders said. “This lady walked up to me and asked if I was abusing my child, so I started crying and both of us were crying and it was a mess.”

“But they really don’t know,” Cathy Sanders said. “Right now they’re just going to keep her on chemo which means we’ll have to keep making those trips to Portland for years.”

The family has sent a referral to St. Jude’s Children’s Hospital in Memphis, Tennessee, to see if Elizabeth is eligible for one of their clinical studies in hopes that they can give a better treatment than chemo for the next several years.

Even if the treatments are successful, the family is worried about the long term effects on Elizabeth. The chemo causes insomnia, and that makes it tough for her mother who works at night in a care facility in Sutherlin.

Financially, it’s been a strain for the family.

“It’s tough, some of her medications, we have to pay for out of pocket,” Holly Sanders said. “And there’s the travel expenses and when she’s sick you have to miss work, it’s been a big adjustment.”

Elizabeth continues to be an active 2 year old and even learns some sign language online watching YouTube videos so she is improving her communication skills even though the tumor has slowed her speech development. She does physical therapy and occupational therapy once a week in Roseburg.

The family is just thankful the tumor was finally found even though it took longer than they had hoped.

“It’s always in the back of my mind what would have happened if they would’ve found it earlier,” Cathy Sanders said.

Meanwhile they’re hoping that the chemo will have an effect and start shrinking the tumor. So far it hasn’t.

A GoFundMe account has been set up to help the family with some of the mounting expenses: https://www.gofundme.com/f/Elizabethsfight1.

A just, compassionate society would have universal coverage, single payer. Go Fund Me is not a health care plan. See pnhp.org and hcao.org.