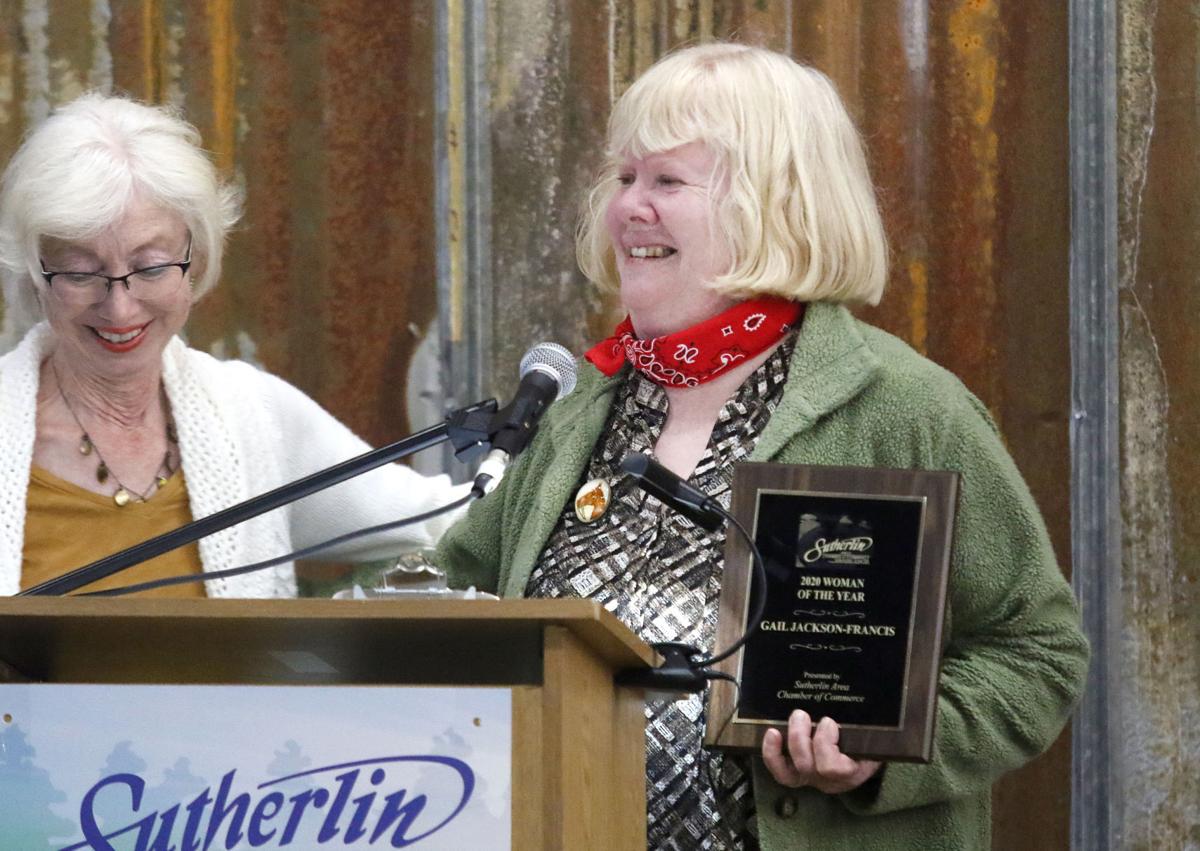 Gail Jackson-Francis, right, accepts the award for Woman of the Year during the 65th annual Sutherlin First Citizens Awards Banquet organized by the Sutherlin Chamber of Commerce in Oakland on Saturday. 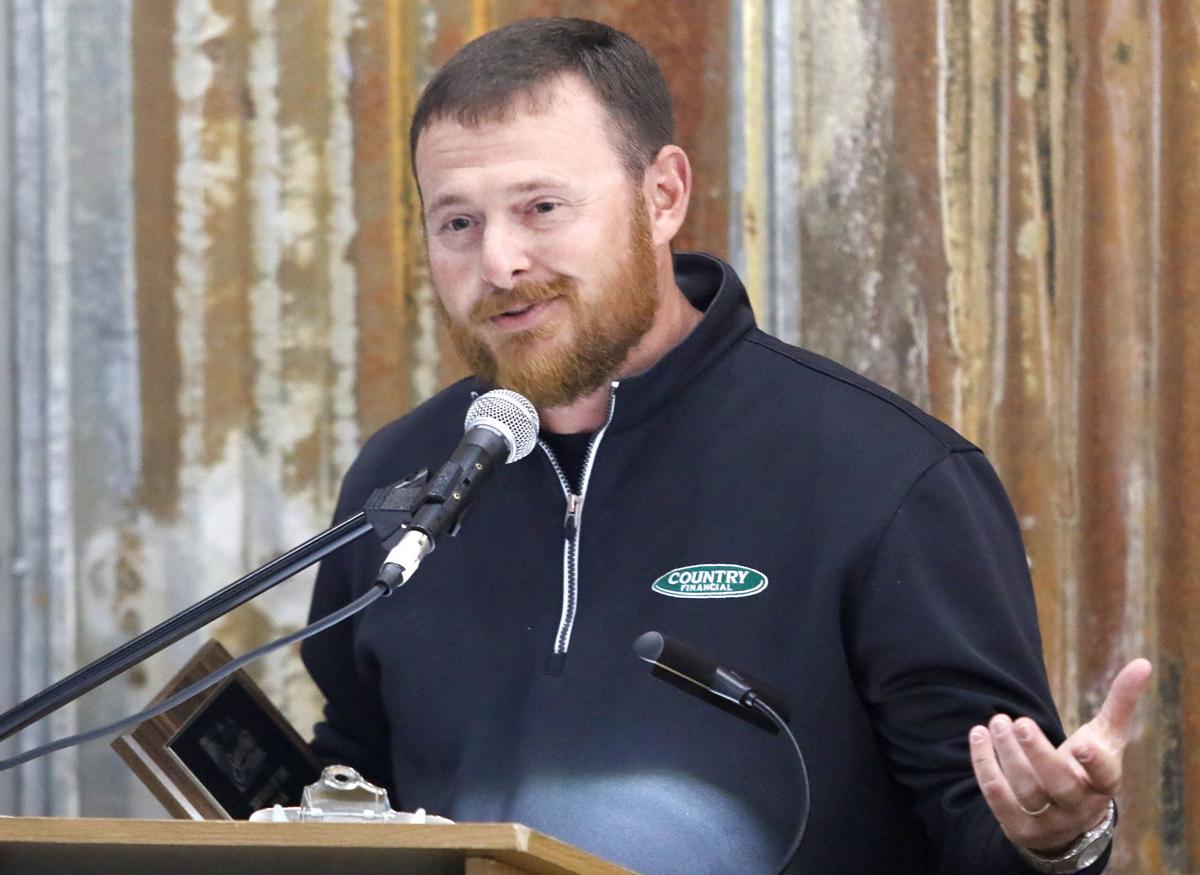 JR Guthrie accepts the award for Man of the Year during the 65th annual Sutherlin First Citizens Awards Banquet organized by the Sutherlin Chamber of Commerce in Oakland on Saturday.

Gail Jackson-Francis, right, accepts the award for Woman of the Year during the 65th annual Sutherlin First Citizens Awards Banquet organized by the Sutherlin Chamber of Commerce in Oakland on Saturday.

JR Guthrie accepts the award for Man of the Year during the 65th annual Sutherlin First Citizens Awards Banquet organized by the Sutherlin Chamber of Commerce in Oakland on Saturday.

Gail Jackson-Francis and JR Guthrie were honored Saturday night as the Sutherlin Area Chamber of Commerce and Visitors Center 2020 Woman and Man of the Year.

The chamber’s annual honors were held at Spire Mountain Cellars in Oakland, with nearly 100 in attendance.

Jackson-Francis was honored for her work in the community as a whole, but primarily for her work in helping spearhead the St. Francis Community Kitchen, which provides meals for those in need.

“This has been an amazing year,” she said. “It was so cool having the kitchen nominated, too. Especially this year. You just have to keep getting up and going for it.”

Guthrie was presented by 2019 Man of the Year honoree Rick De Young, who called the 42-year-old Douglas County native “a pretty young guy” in the Sutherlin service organization circle.

“He brings a lot of energy to every project he volunteers to do,” De Young said. “He has my sincerest respect.”

“I look around the room, I look around our community and I don’t know if I really deserve this,” Guthrie said, who also volunteers with youth agricultural efforts. “I just love to see people help people, and we have a community that does that.”

Earlier in the evening, Jackson-Francis joined Theresa Kirkpatrick at the podium as they accepted the Inspirational Leader award on behalf of the St. Francis Community Kitchen and its volunteers.

“This staff of community kitchen volunteers ... we’ve been doing it for 17 years,” Kirkpatrick said. “It’s not just for the homeless, but anybody in the community who really, really needs a hot meal.”

Kirkpatrick said that amid the closures and confusion caused by the coronavirus pandemic, the St. Francis Community Kitchen and its crew chose to press on.

“We couldn’t do it without each other,” Kirkpatrick said. “This group of volunteers said, ‘We’re not going to stop. We can’t stop feeding the people who need it.’”

The award for Outstanding Service was bestowed upon Jim and Beth Houseman, whose years of hard work have transformed Ford’s Pond — once destined to languish as a treated water storage area — into a multi-use, family-friendly recreation area mere miles outside the Sutherlin city limits.

“Since the creation of the Friends of Ford’s Pond nonprofit in 2014, they have lead the effort in fundraising through numerous campaigns and grant applications,” Chamber Executive Director Tracy Martz said in honoring the Housemans. “If you have not taken a drive by Ford’s Pond lately, I highly encourage you to take that turn onto Church Road and simply see for yourself the amazing development that is underway.”

Unfortunately, the Housemans were not able to accept their award in person. Joe Keady accepted on their behalf.

“Can you imagine trying to run a tech department during COVID?” Sutherlin School District Superintendent Terry Prestianni said while honoring Carrillo. “We relied on him a lot.”

Prestianni said when he asked Carrillo how he was going to set up the technology for distance learning, Carrillo replied, “We’re not using Zoom!”

Adam Sarnoski, owner of signage company Cooper Creek Creative, was honored as the Outstanding Business for 2020. In addition to being responsible for some of the more outstanding business signage in downtown Sutherlin, Sarnoski also was the designer of the brilliantly lit Christmas trees which illuminated Sutherlin’s Central Park before a freak windstorm caused severe damage to the tallest in the display.