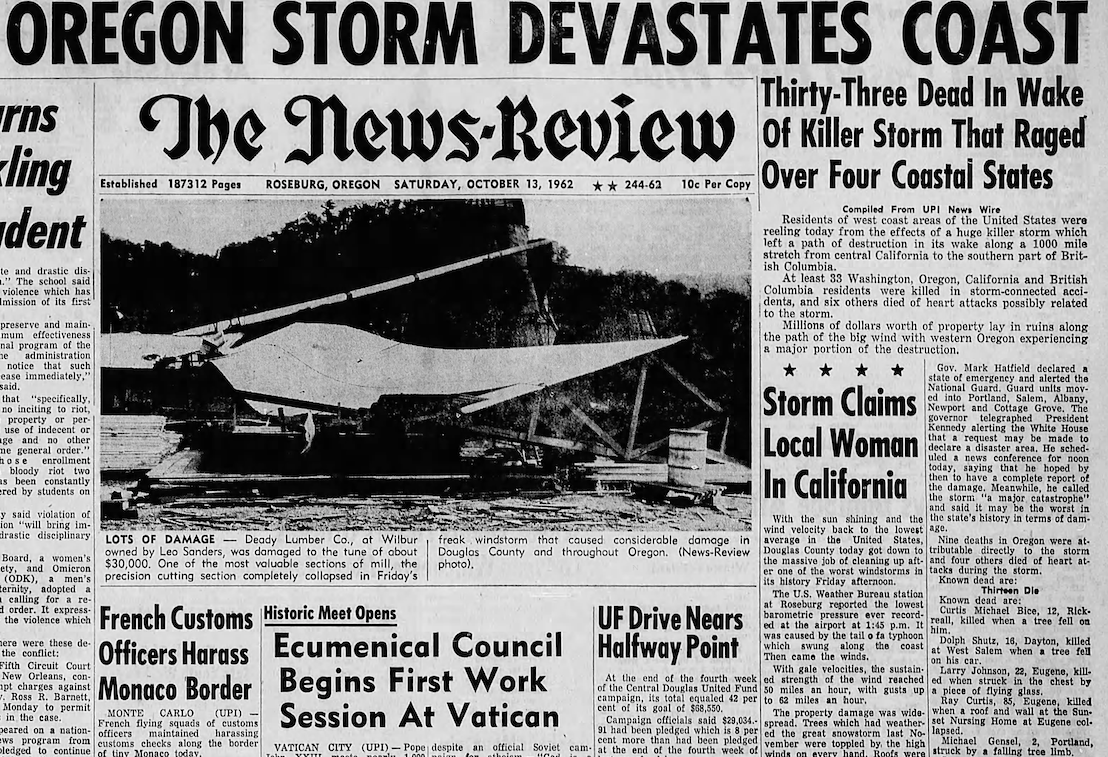 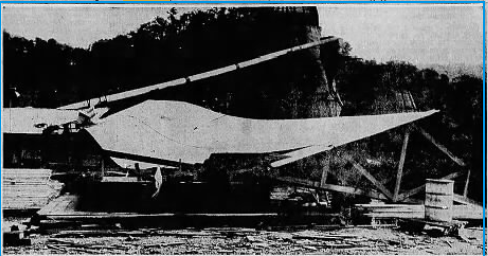 Deady Lumber Co. in Wilbur had its roof collapse in the Columbus Day Storm of 1962. 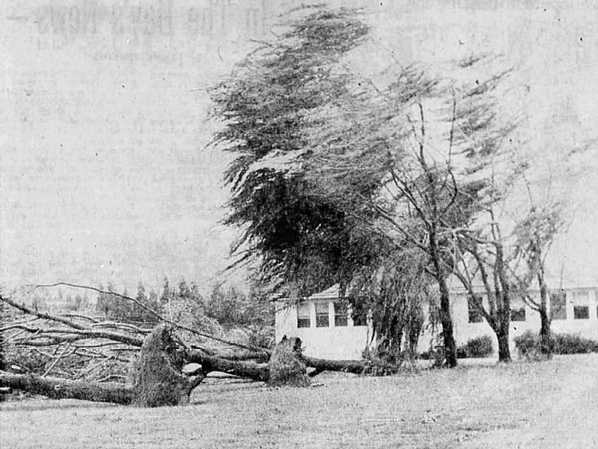 High winds kicked out trees standing in front of the Douglas Community Hospital during the storm in 1962. 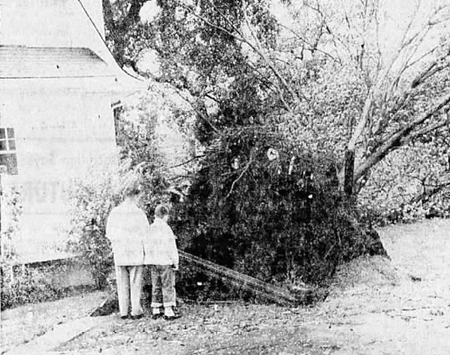 Family members eye damage from the storm in 1962.

Deady Lumber Co. in Wilbur had its roof collapse in the Columbus Day Storm of 1962.

High winds kicked out trees standing in front of the Douglas Community Hospital during the storm in 1962.

Family members eye damage from the storm in 1962.

Kathleen Cason was a fourth grade student at Myrtle Creek Elementary School when the Columbus Day Storm ripped through Douglas County on Oct. 12, 1962.

She was headed down the hallway when she saw the winds blow off the doors to the playground outside. School was closed right away and the buses took kids home.

Cason was allowed to go home with a friend who lived on Clarks Branch Road. On the way, she saw branches blowing around on the freeway. That night, the winds kept roaring and they could hear trees falling.

“It sounded like the world was coming to an end,” she said.

Cason remembers that night she and Roberta Long spotted a bear looking at them, and they huddled under the covers for the rest of the night.

The next day, they got up to find branches on the woodshed and an injured porcupine inside. When her mom came to pick her up and take her home, she saw that the wind had blown off the roof of their prune dryer and set it beside the building.

“When I got home, my mom said well there’s a nice surprise waiting for you in the yard,” she said.

The Columbus Day Storm started with Typhoon Frieda, and hit the West Coast of Oregon, Washington, California and British Columbia. On the Oregon Coast, wind speeds were recorded as high as 120 miles per hour.

The power went out and roofs and trees toppled as high winds swept through Douglas County.

The following day, The News-Review reported 33 dead across the region, including 13 in Oregon. Four of those Oregon deaths were heart attacks possibly related to the storm, but the rest were directly attributed to the storm, with many involving being struck by fallen trees.

Roseburg resident Nellie Cooper, 63, was the lone county resident to die. She was killed while sitting in a station wagon parked along Highway 101 in Orrick, California, 40 miles north of Eureka. High winds blew down a redwood tree, which fell on and crushed the car. Her husband Ralph Cooper had stepped out of the car and survived.

Several people were injured by falling trees in Douglas County during the storm. There were power outages around the county.

Many homes, businesses, cars and even an airplane were damaged in the high winds, many by windblown trees falling on them.

Part of the Deady Lumber Company mill in Wilbur collapsed, and part of the roof of Benson School in Roseburg came off. Aluminum roofing at the Glendale Stud Mill blew across the street and broke windows in the Day Supply Store, and the Myrtle Creek swimming pool building was flattened.

Local residents who remember the storm said it was characterized by mostly dry, but very heavy winds.

Cora McKinney was a student at Joseph Lane Junior High School, where all the students were herded into the gymnasium and told the buses were coming to take them home.

The walk home from the bus stop was difficult.

She said she also remembered visiting the state Capitol afterward.

“I remember just, I don’t know, so many huge, huge trees were uprooted and the roots were all laying above the ground. We just don’t have things like that ever,” she said.

“They were everywhere, the grounds at the Capitol were just covered with trees that were uprooted,” she said.

Larry McKinney, Cora’s husband, recalled a friend told him he was working cleaning up a campground on the Smith River between Drain and Reedsport during the storm.

“He said the debris was blowing out of the trees on the ridges and blowing about a half mile straight out before it started to fall. That’s how intense the wind was. He said trees were just falling on the ridge tops right and left,” he said.

Doug Robertson was a freshman at the University of Oregon and was in McClure Hall when the winds began.

“I will never forget the sound. We had never heard anything like that before. It was like a jet plane at very low altitude, except it didn’t come and go. It was like it hovered. It was really loud,” he said.

“Of course we didn’t really know what was going on, except obviously an extraordinary weather event,” he said.

Everyone had to remain inside, but when they got out they saw that the storm damage was devastating, he said. Just as at the Capitol, many big trees were entirely uprooted on campus.

“At the university, the buildings weren’t terribly impacted as I recall, but it took some time obviously to clean it up. It was a big deal,” he said.

Penny Perse was at home in North Roseburg with her baby.

“The wind blew and the wind blew, that’s for sure. It looked like the tree in our front yard was going to fall into the front window,” she said.

Her tree’s roots came up too. In the end, the tree and the window were saved after a group of men tied the tree down, though it never really grew straight again.

Darlene Swearingen was shopping in Roseburg when the storm started and decided to head back to her home about 15 miles outside of Elkton.

She recalls how weird the Umpqua River looked.

“When you looked at the water it would just be peaked in the middle. I never quite figured all that out, it looked like the wind was just blowing it into a big wave,” she said.

Swearingen’s sister Donna Kobbe of Elkton was living in Aloha at the time. Part of the roofing of her home was torn off and the power went out.

“I had washed the diapers and put them in the dryer but I hadn’t dried them yet,” she said.

It was hard to replace the roofing, she recalled, because the demand was so high after the storm.

Emily Blakely was a high school sophomore in Toledo, Oregon, about 6 miles from the coast. She recalled rain with the winds there and said her father had her digging a trench around the house.

“I remember the wind. We just had a small house so it was pretty scary. Then of course, trees and branches flying around,” she said.

The aftermath looked pretty similar to that of the 2019 ‘Snowmageddon’ storm, she said.

The ‘60s were a tough decade for storms. Many of those who spoke to The News-Review also remembered the Christmas flood of 1964 that happened two years afterward.

Jack Rountree of Roseburg recalled his parents were flooded out at their home in Myrtle Creek during the ‘64 flood. They owned a trailer park near the South Umpqua River and his mother called him to say the water was all around the house and raising a foot an hour. His dad didn’t want to leave the house.

As he drove down there, the water was about as high as his pickup’s floorboards. He had to wade through waist-deep water to get to the house.

“The water was within inches of coming into the floor at that time, so I convinced my dad it was time to leave,” he said.

Before the night was over, the flood had washed out the windows in the home.

“It was a pretty devastating thing for our family at that time,” he said.