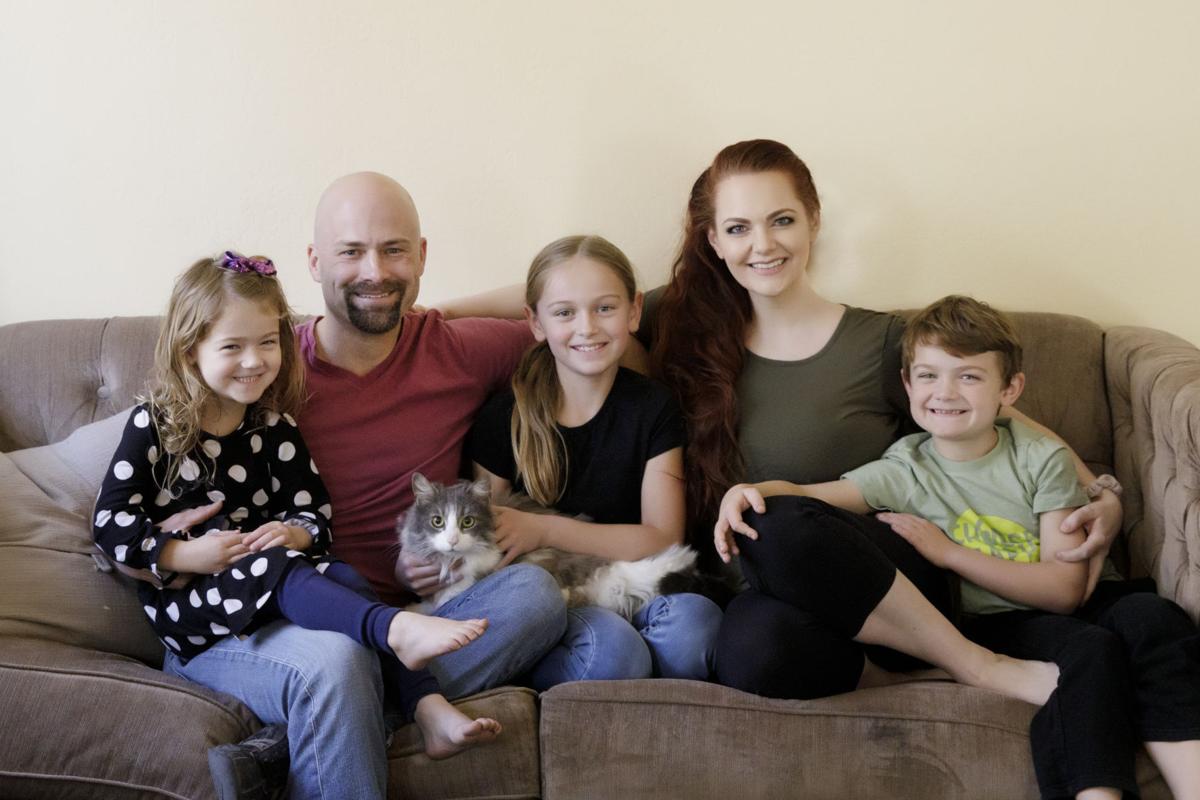 Lexi, back home with her family in Gilbert, Arizona, after a harrowing visit to Douglas County. From left are Violet, Andy, Maxine, Lizzy and Everett McMillan. 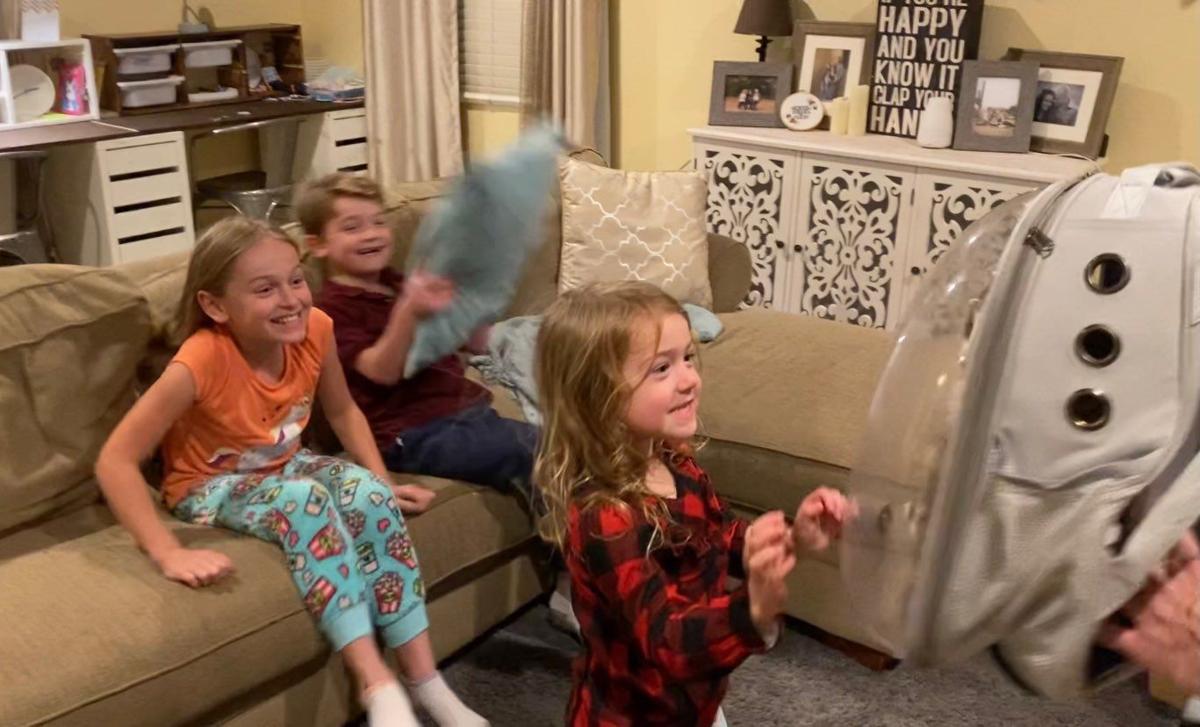 From left, Maxine, Everett and Violet McMillan of Gilbert, Arizona see Lexi for the first time in January. Their parents kept the cat’s safe return, after she was lost on a Douglas County camping trip this summer, a secret until this moment. 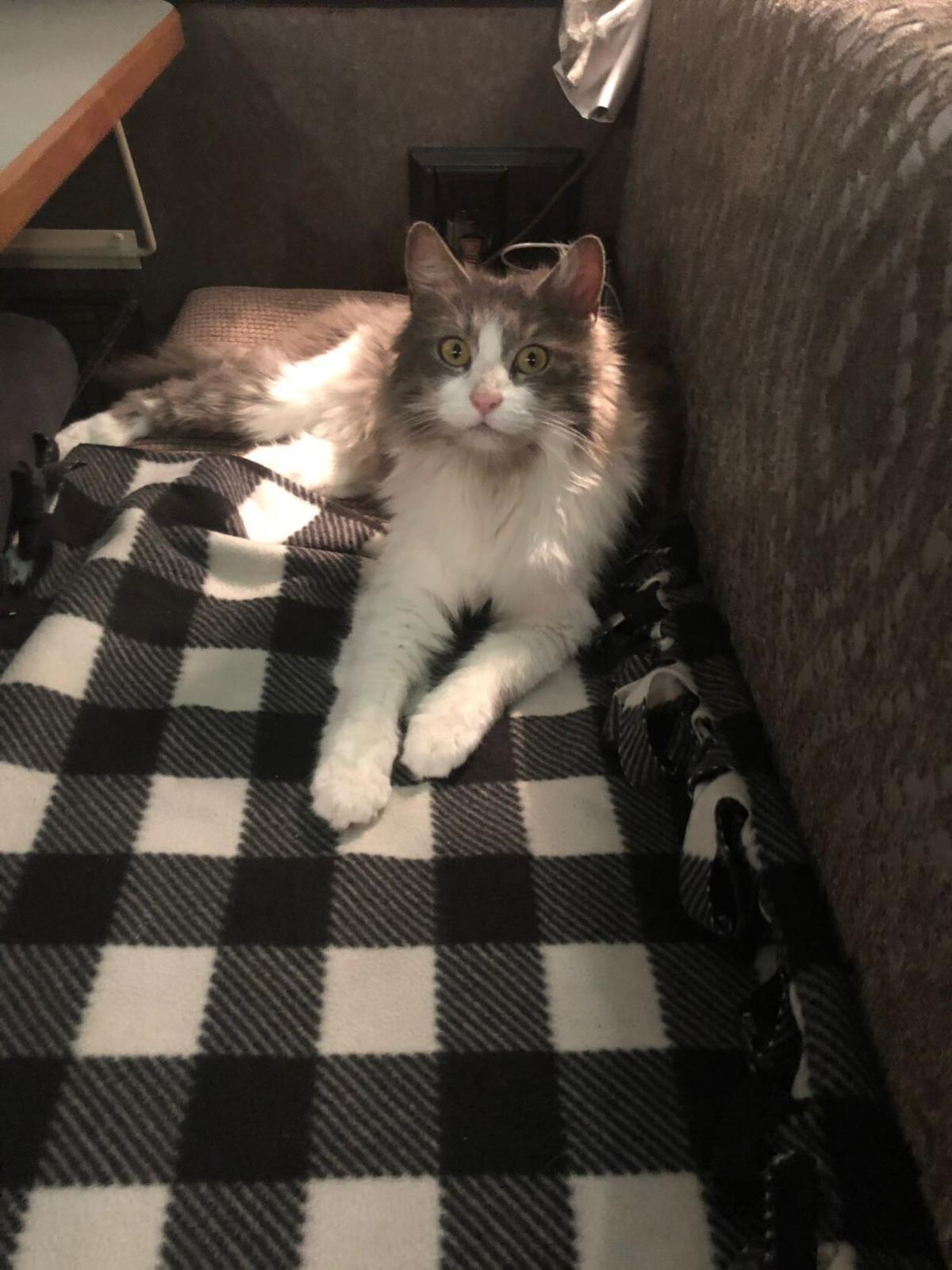 Lexi reclines in the camper of Janice Quist in January, finally on her way home to Arizona after she was lost during a Douglas County camping trip in August. 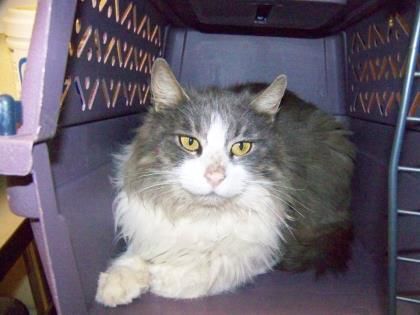 Lexi, an ordinary house cat from Arizona, was lost on a Douglas County camping trip in August. After being lost for months and found by Chris Southwick of Glide, she was returned to her family in January. 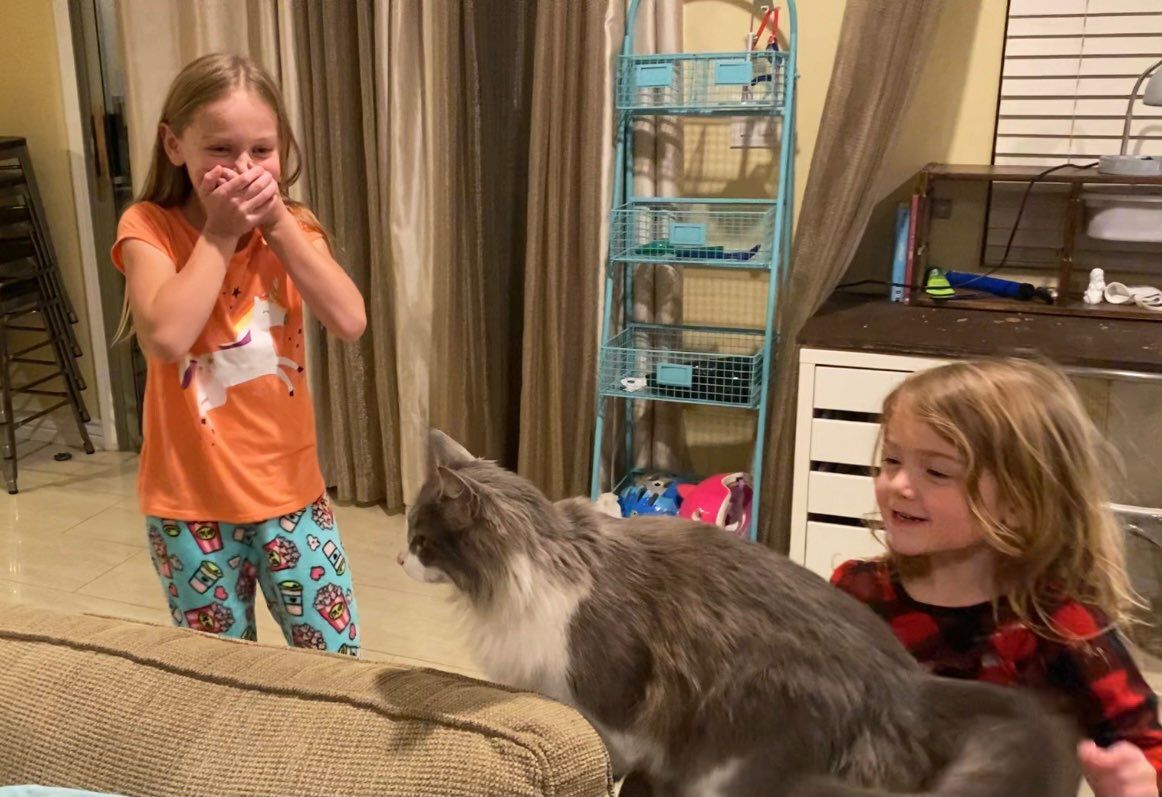 Lexi, back home with her family in Gilbert, Arizona, after a harrowing visit to Douglas County. From left are Violet, Andy, Maxine, Lizzy and Everett McMillan.

From left, Maxine, Everett and Violet McMillan of Gilbert, Arizona see Lexi for the first time in January. Their parents kept the cat’s safe return, after she was lost on a Douglas County camping trip this summer, a secret until this moment.

Lexi reclines in the camper of Janice Quist in January, finally on her way home to Arizona after she was lost during a Douglas County camping trip in August.

Lexi, an ordinary house cat from Arizona, was lost on a Douglas County camping trip in August. After being lost for months and found by Chris Southwick of Glide, she was returned to her family in January.

Lexi is an ordinary house cat who, as far as her family knew, didn’t even know how to hunt.

So when the McMillan family of Gilbert, Arizona, lost her at Thielsen Forest Campground about 6 miles from Diamond Lake in August, they feared she wouldn’t make it.

But somehow, this little gray-and-white, long-haired cat survived a grueling autumn in the wild. In September, she came within one mile of a raging wildfire that devastated the area. By November, she was clinging to life through a heavy snowstorm.

But this month, she was returned to her family in Arizona thanks to the actions of concerned citizens who stepped in to help a cat in need.

Lizzy McMillan said Lexi’s a good traveler — she walks on a leash, rides in a backpack and happily stays in a camper — but she escaped while the adults were distracted. They were hopping in and out of the truck while attempting to execute a 45-point turn to pull their travel trailer out of a campsite that was just too small for it.

Lexi’s people noticed the cat was missing a few miles down the road and returned to look for her, staying an extra day in hopes of finding her.

But they had no luck.

McMillan said they didn’t think their pet would survive.

“God love her, she is a sweet cat, but she is terrible at being a cat,” she said. “One time we had a mouse in our old house and she was not even interested.”

But Lexi had one thing going for her. Her family had a microchip implanted when she had been spayed.

More on that in a minute.

Exactly what Lexi did during the rest of August and September is unknown. But by late October, Oregon Department of Transportation workers based at the Lemolo maintenance shop off Highway 138 East about a mile away were reporting having seen a stray cat in the area. She was first spotted about a mile from the shop, 2 miles from where she was lost, and later on the shop’s grounds.

Among his other duties, Oregon Department of Transportation maintenance crew member Chris Southwick is one of the people who runs those snowplows that keep the highway open in the winter.

Southwick said he and other employees who work at the Lemolo shop started bringing food for the cat they knew was out there somewhere, but it never seemed to eat anything.

Then one day around Thanksgiving, Southwick saw tracks in the snow at the station — fresh cat tracks.

The tracks wandered off toward the corner of the yard where several pieces of equipment were parked. The tracks ended at a truck.

“So we opened up the hood of the truck that was there, and there it was sitting on top of the engine trying to get warm. So I grabbed it,” he said.

The cat was so weak and hungry she couldn’t run away.

So Southwick brought her inside and gave her some food.

When his shift was over, he took Lexi to his Glide home. She rode on his lap.

“It kinda let out a sigh and went limp and passed out, it was that tired,” he said.

For the next three days Lexi did little but sleep, waking only to eat and drink. Finally, she got healthy enough to come out and wander around the house.

Lexi — who Southwick was calling “Snowy” at the time — fit in well with his family and its two cats, two dogs, chickens and fish.

But Southwick thought about how sad his kids would be if it had been their cat who was lost.

And he wondered if she might have a microchip that would identify the cat’s owners. So he took Lexi to Saving Grace Pet Adoption Center to find out.

She did have a chip, and so the next leg of Lexi’s journey was about to begin.

Then they began reaching out to see if anyone was headed to Arizona.

Saving Grace volunteer Janice Quist, as it turns out, winters each year in Surprise, Arizona, about an hour from Gilbert, where the McMillans live.

Quist wasn’t leaving until early January, though, so while Lexi waited, she was foster housed with volunteer Michael Hall, Winterholer said.

She said it was fun to be part of this family reunion.

“That’s what we’re here for. Those are the stories that make everything worth it,” she said.

Lexi traveled out of Oregon the same way she’d traveled to it — in a camper.

“She was so good the whole way down in our motor home. She was obviously used to traveling,” Quist said.

Along the way, she had yet another companion, the Quists’ 13-pound Havanese dog.

Quist said the dog was more skittish of Lexi than she was of him.

Once they arrived in Surprise, Lizzy McMillan’s husband, Andy McMillan, drove down to pick up Lexi.

He put the cat into a clear cat backpack and hauled her out for the last leg of her journey.

There was yet another surprise in store for Lexi, though.

In the months since they lost Lexi, the family had moved to a new home.

The people were the same, the furniture was the same, but it was a different place.

Waiting at home, completely unaware that Lexi had been found, were three children.

Maxine McMillan, 10, had received Lexi as her fifth birthday present.

She and her brother Everett, 7, and sister Violet, 4, were not told the cat had been found and was on her way.

Lizzy McMillan explained they feared it would be doubly devastating for them if the cat were to be lost again on the way.

It was the hardest secret they’d ever had to keep from them, she said.

The kids’ reaction when they first saw Lexi, brought in inside the backpack, was priceless.

“The kids just went ballistic. They were so excited and couldn’t believe that she had been found,” Lizzy McMillan said.