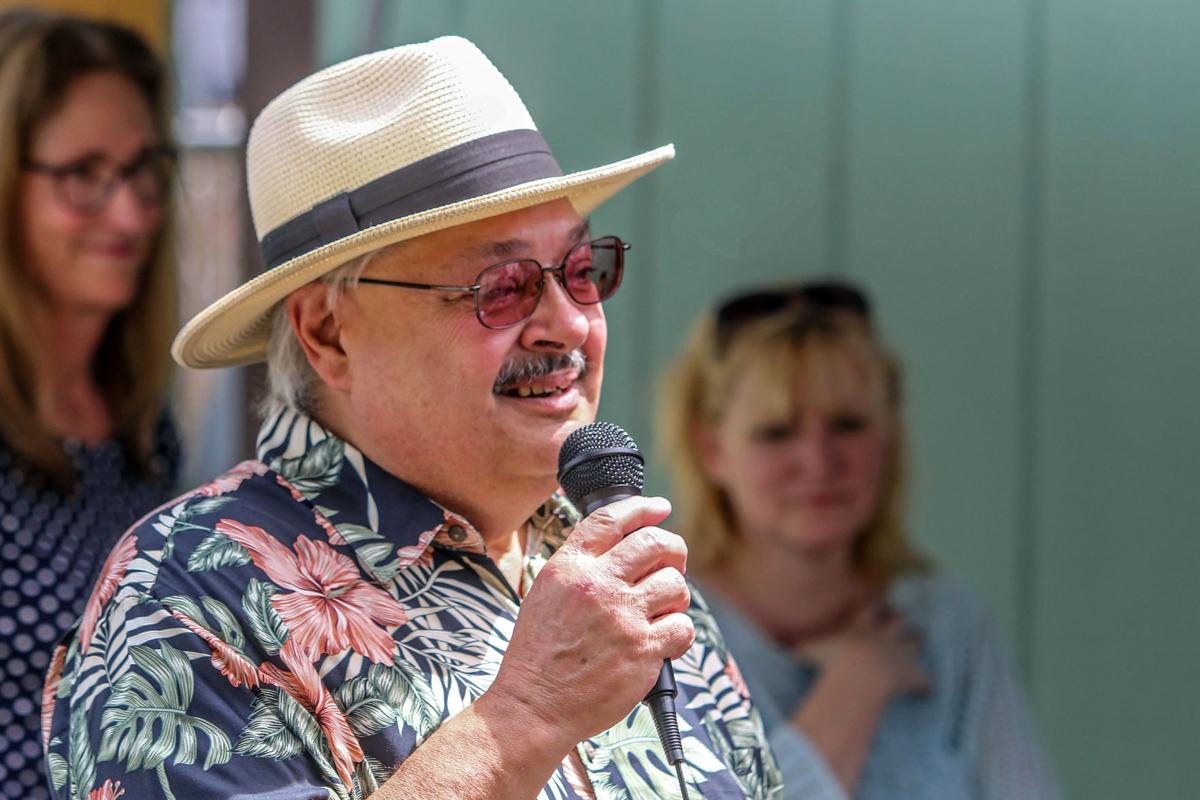 Gary Williams, former interim director for the YMCA of Douglas County, addresses the crowd during a retirement party for himself and outgoing Business Office Manager Stephanie Nesbitt at the Roseburg YMCA on Friday. 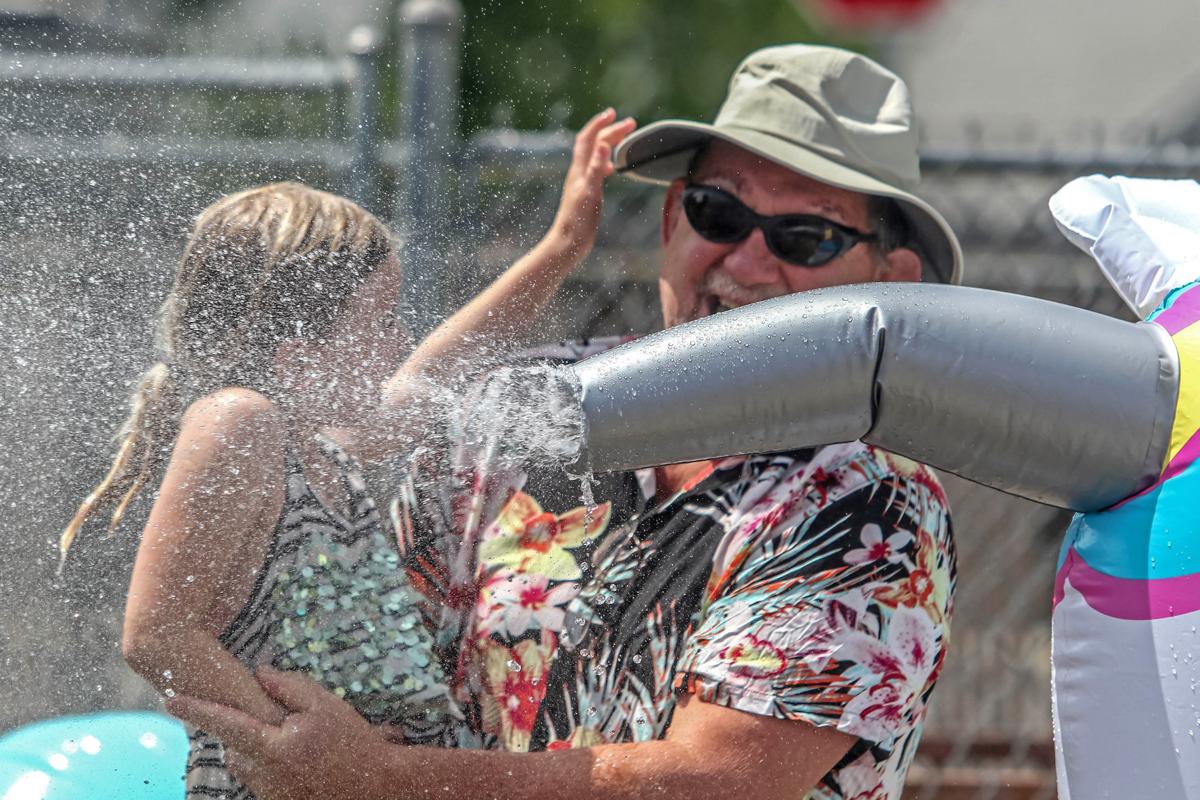 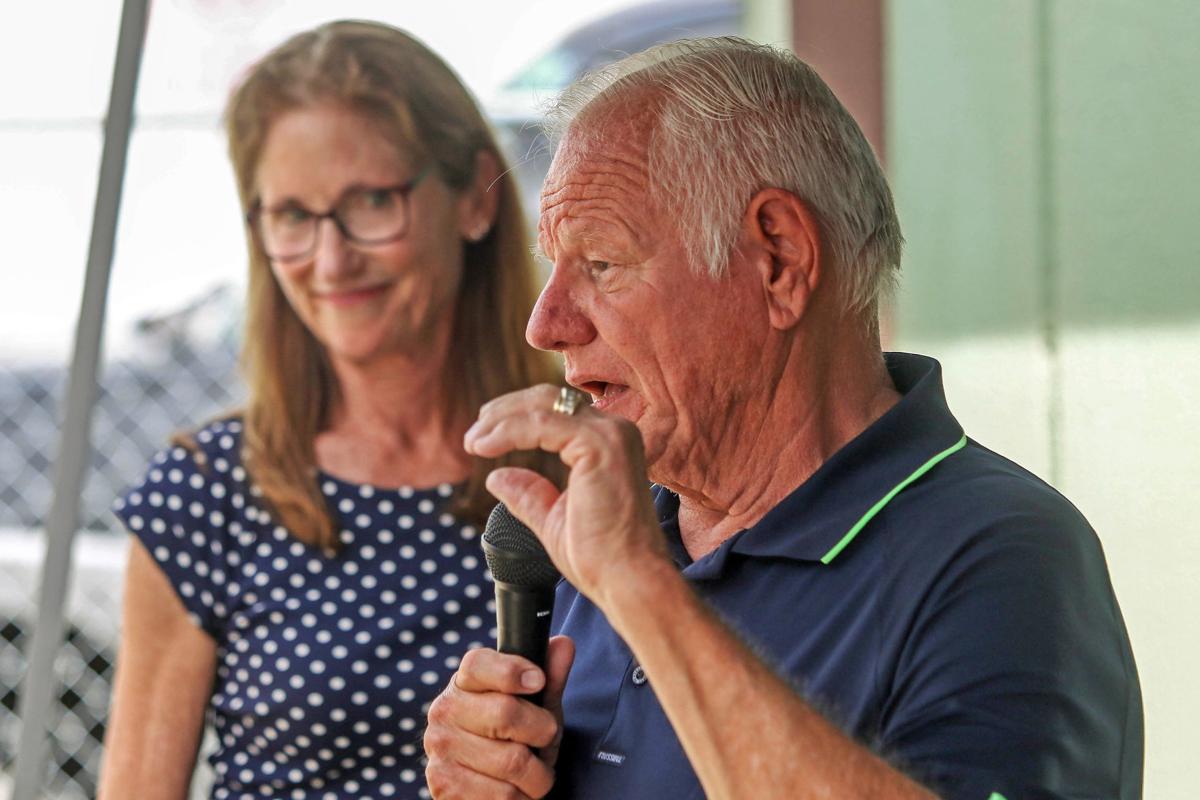 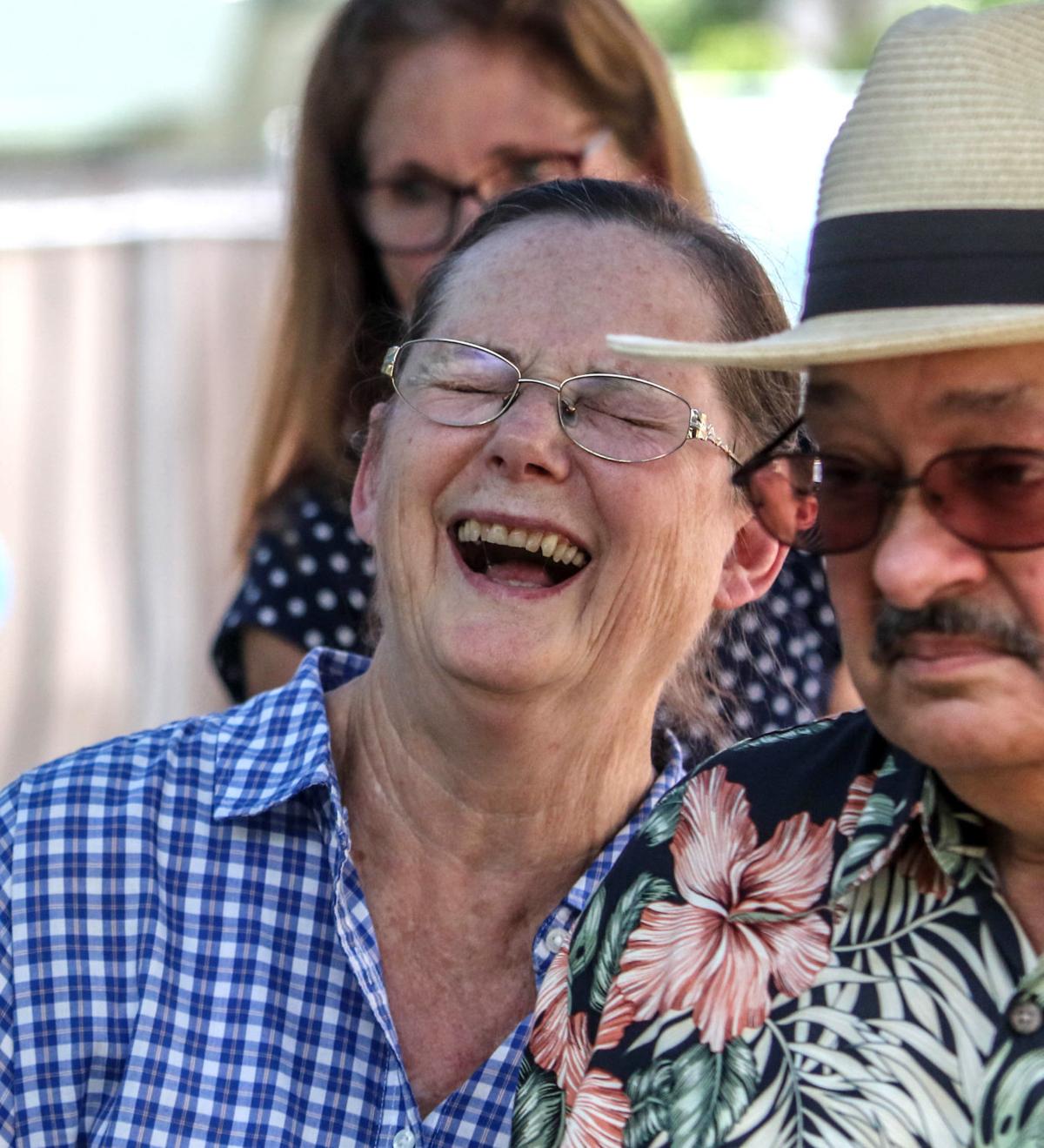 Stephanie Nesbitt, outgoing business manager for the YMCA of Douglas County, laughs along with Gary Williams during a video collection of greetings during a retirement party Friday. 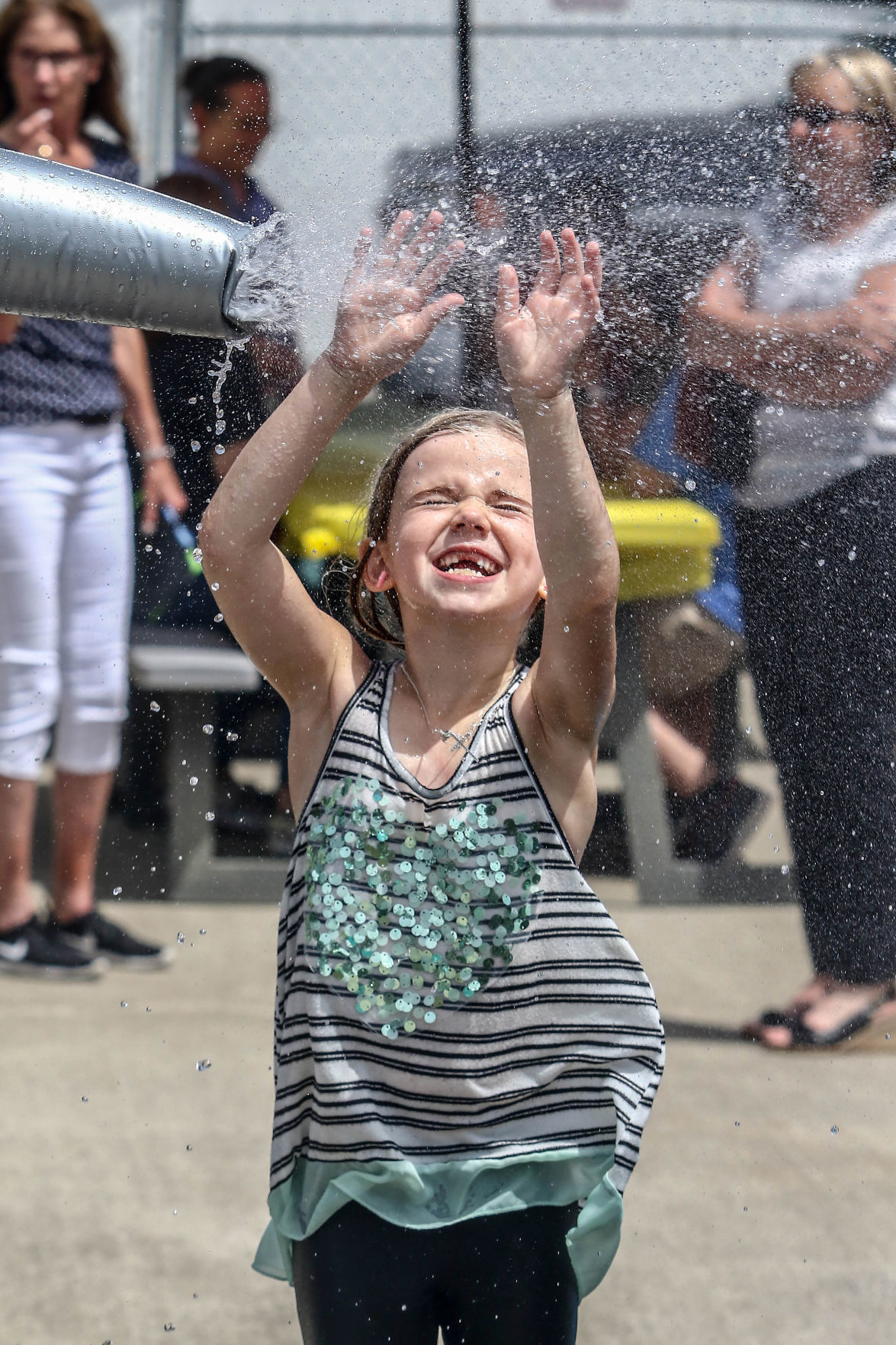 Kailey Dye, 7, enjoys the spray from an inflatable unicorn during a retirement party for Gary Williams and Stephanie Nesbitt at the YMCA of Douglas County on Friday. 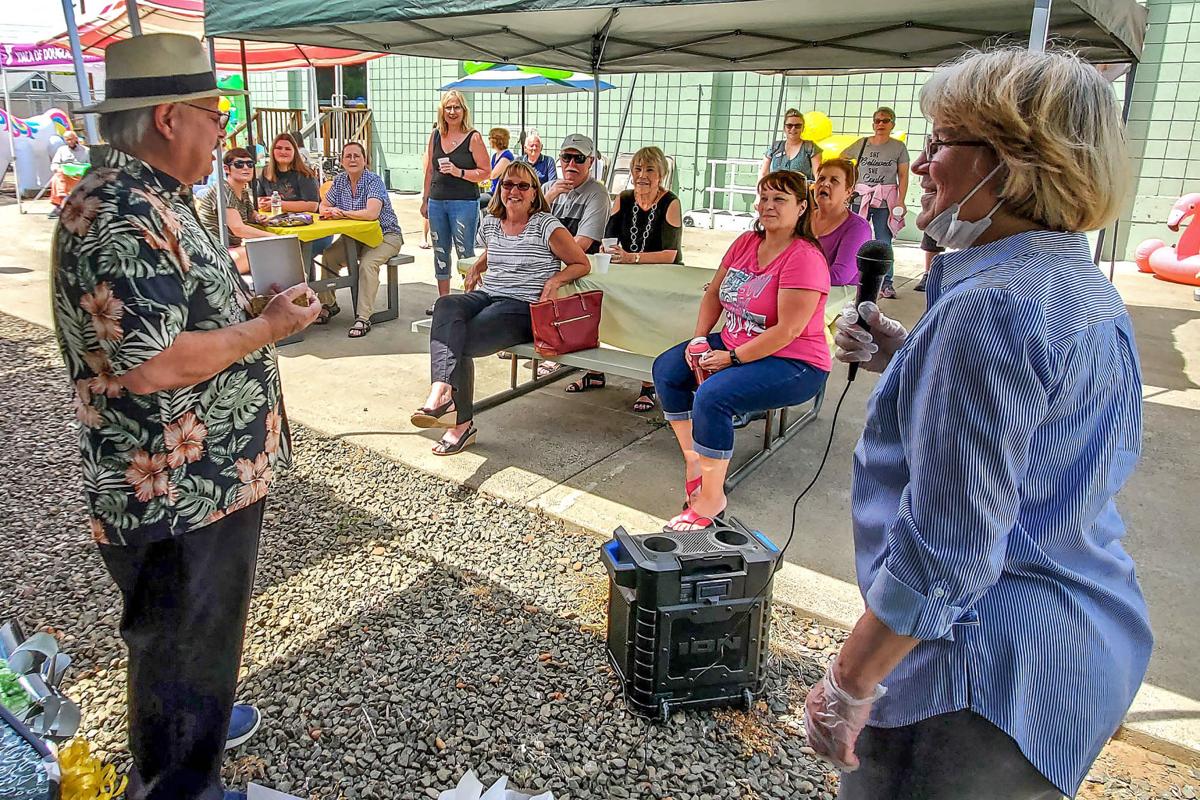 Gary Williams, former interim director for the YMCA of Douglas County, addresses the crowd during a retirement party for himself and outgoing Business Office Manager Stephanie Nesbitt at the Roseburg YMCA on Friday.

Stephanie Nesbitt, outgoing business manager for the YMCA of Douglas County, laughs along with Gary Williams during a video collection of greetings during a retirement party Friday.

Kailey Dye, 7, enjoys the spray from an inflatable unicorn during a retirement party for Gary Williams and Stephanie Nesbitt at the YMCA of Douglas County on Friday.

After nearly 21 years at the YMCA of Douglas County, Gary Williams has done just about everything, including becoming the interim CEO in February to replace CEO Marissa Fink.

On Friday, Williams had one more item on his to-do list — attend a retirement party to say goodbye after 21 years. The outside party was also a time to honor Business Officer Manager Stephanie Nesbitt who plans to retire in July after 20 years at the YMCA of Douglas County.

The two were presented with gifts and a cake for each of them, along with a collection of video greetings.

Williams didn’t have a clue what his last few months were going to be like.

“When Marissa left on Feb 21, I took over as the interim CEO and we closed the Y on March 21 because of COVID,” Williams said.

The 66-year-old Williams started at the YMCA in 1999 as the teen and family director. He did several jobs including director of the YMCA extension in Green, director of the south county branch in Canyonville and many other duties.

Williams become the branch director in Roseburg when Fink needed more time to do the fundraising for the construction project that included a new pool, locker rooms and other renovations.

The YMCA opened June 1 with the new pool and locker rooms completed, and a lot of maintenance was done while the building was closed. Williams said the buildings are in good shape.

“That was huge for us, the pool was built in 1960, it was long past its lifetime,” Williams said. “And the locker rooms were just falling apart.”

Bob Milton, former director of the YMCA, came from Moses Lake, Washington, for the event. He hired Williams 21 years ago.

“He is compassionate, he loves children and just puts his whole effort into working with people, he truly embodies the YMCA’s spirit of mind and body,” Melvin said.

Just as everyone else has struggled during the pandemic, the YMCA and its center were shut down, a move that adversely affected its financial bottom line. But several members went ahead and paid dues as a donation. Membership, though, has dropped drastically from before the shutdown.

YMCA officials are hopeful daycare services can reopen in September to bring back some of that revenue, but that is still uncertain.

“We’re about half (the normal members) right now,” said longtime YMCA board member Shelley Briggs Loosley. “We are doing all the proper social distancing, we’re following every regulation, but we need our members to come back.”

As Williams steps away, Matt Lund, CEO at the YMCA of Grants Pass, will pick up the duties as interim director of the YMCA of Douglas County and he’ll be commuting a couple of times a week from Grants Pass.

“It’s tough enough going through transition and then throw the pandemic in there with everything else,” Lund said. “So I want to make sure the staff is taken care of first and foremost.”

A year after Williams was hired, Milton hired Steph Nesbitt as the business office manager. Nesbitt said her time at the Y has been rewarding.

“When I came here I just needed a job, but when you come and work at the Y pretty soon it grows on you and I think most of the staff that come through the door try to live up to those core values,” Nesbitt said.

Williams says he will continue to be around and will probably volunteer occasionally, but he’s ready for retirement.

“It’s been a very rewarding experience working at the YMCA, I truly believe that, I think we’ve made a difference in a lot of people’s lives,” Williams said. “I’d just like to thank the community for the support they’ve given me for the past 20 years.”

“The smartest things I ever did, I had a chance to hire Gary and Steph,” Milton said.