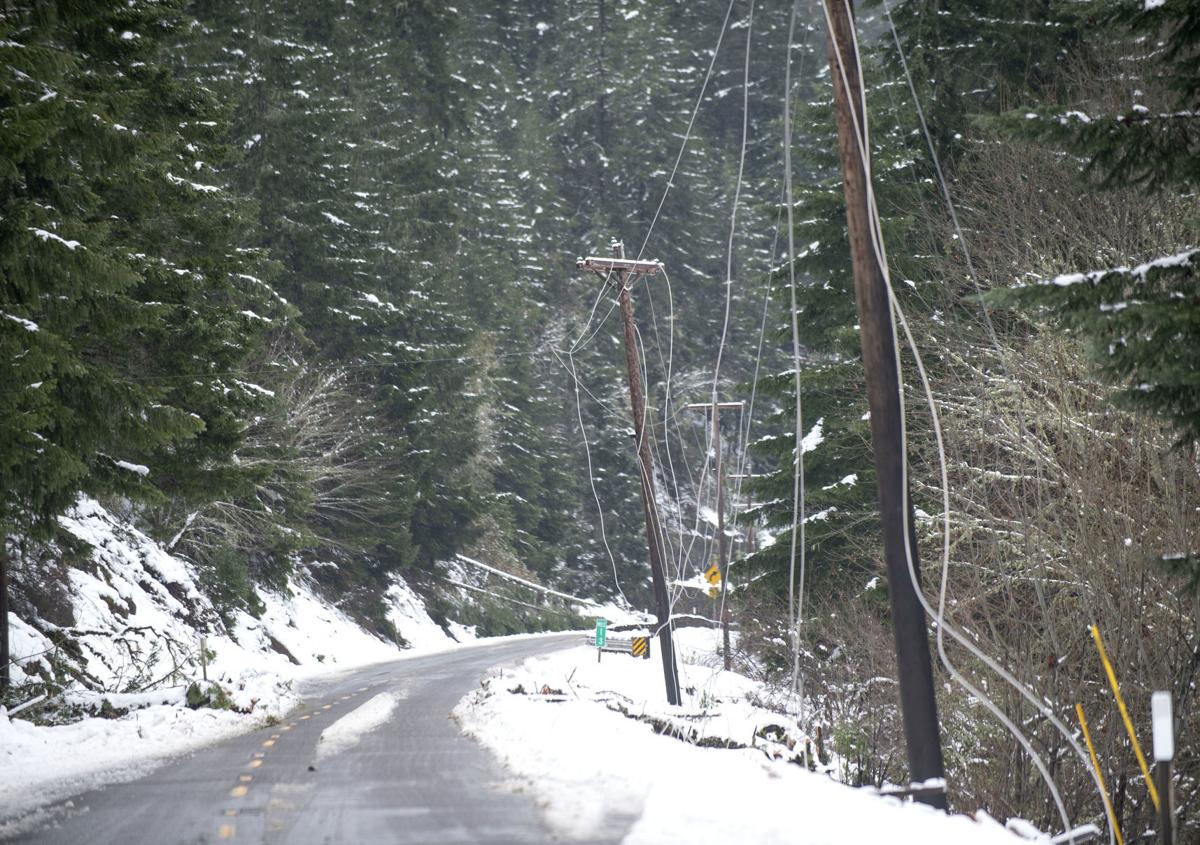 Downed power lines as seen along Highway 138 near Tyee in February 2019. Thousands were without power and roads were closed after a massive snow storm hit the area a year ago. In many parts of the county, cleanup is still going on from the devastating snowstorm. 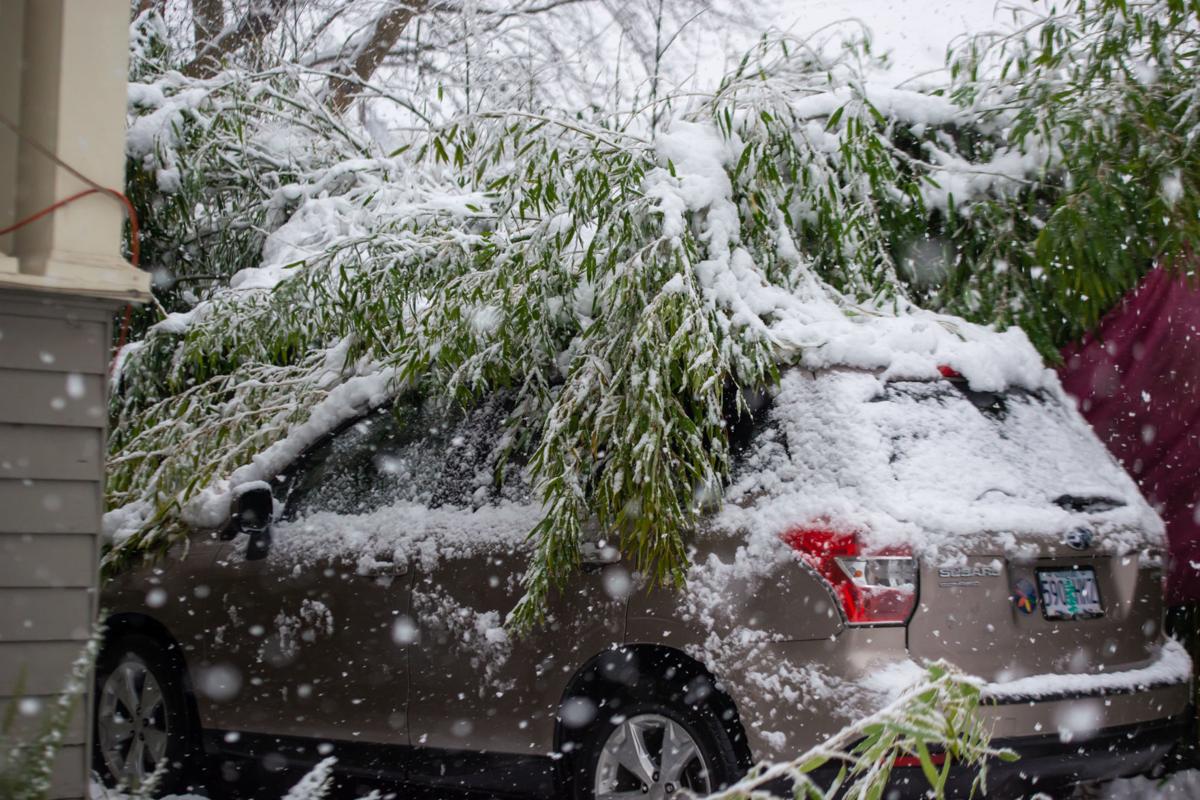 Snow-covered bamboo collapses onto a Subaru in a driveway on Northeast Jackson Street in Roseburg on Feb. 25, 2019. Snow snapped trees and cut power to more than 10,000 people in Roseburg. 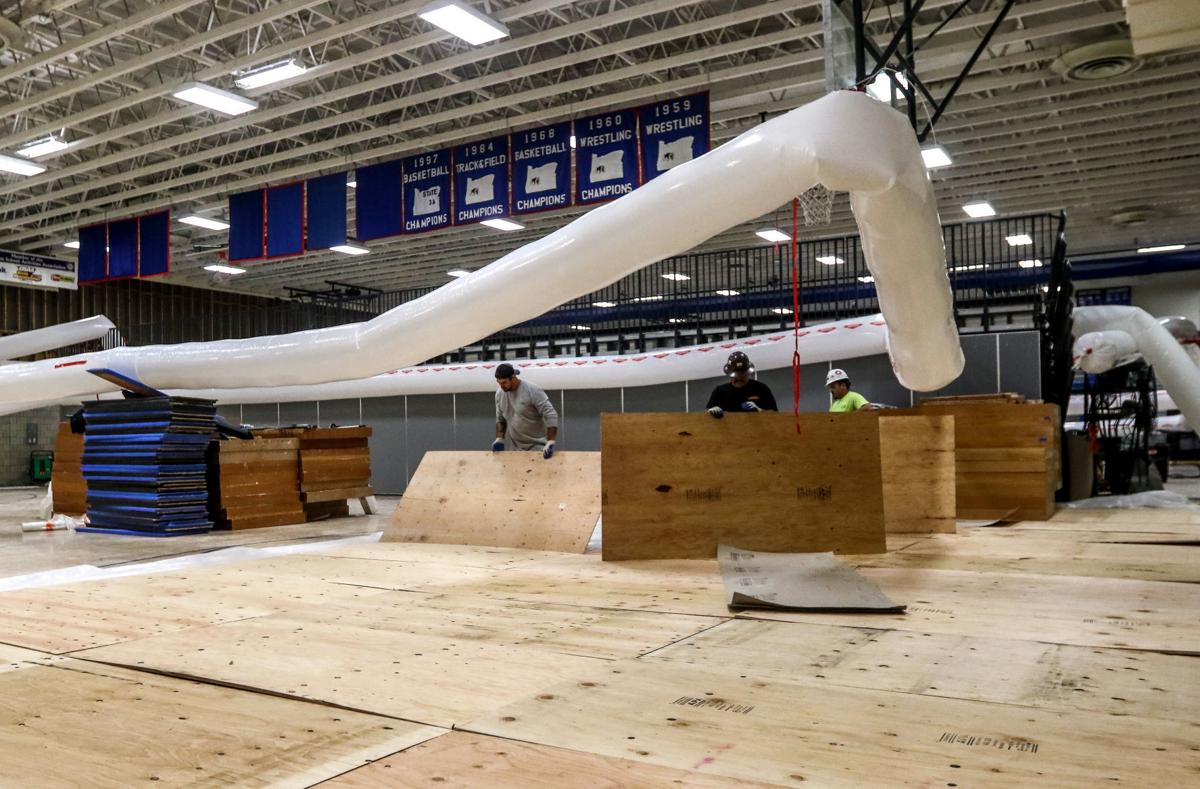 Downed power lines as seen along Highway 138 near Tyee in February 2019. Thousands were without power and roads were closed after a massive snow storm hit the area a year ago. In many parts of the county, cleanup is still going on from the devastating snowstorm.

Snow-covered bamboo collapses onto a Subaru in a driveway on Northeast Jackson Street in Roseburg on Feb. 25, 2019. Snow snapped trees and cut power to more than 10,000 people in Roseburg.

Last year at this time, many Douglas County residents were still digging and chainsawing their way out of the aftermath of the biggest snowstorm in memory.

On Feb. 25 and 26, 2019, more than a foot of snow fell, toppling thousands of trees, blocking roadways and knocking down power lines around the county in a storm that would soon be dubbed “snowmageddon.”

It would be weeks before many rural county residents would have their power restored. Douglas Electric Cooperative brought in extra crews to essentially rebuild an electrical grid that had been devastated.

A year has passed, but in some of the more remote parts of the county, roads remain blocked by downed trees today. And downed trees are still creating delays and difficulty for search and rescue and firefighting operations.

County crews continue to collect and dispose of the debris.

To date, the total cost of the aftermath is estimated at $11.2 million. The bulk of that, $9.2 million, is the cost to restore the electrical grid.

Sutherlin’s gym was severely damaged in the storm and has been restored, at a cost of more than $1 million. The problems that made the roof vulnerable to damage from the storm have been fixed so the same type of storm wouldn’t destroy it next time around, Sutherlin School District Superintendent Terry Prestianni said.

While the funds to repair the school gym came primarily from insurance, about 75% of the other costs are expected to be reimbursed by the Federal Emergency Management Agency.

What FEMA won’t be reimbursing is the unknown cost to individuals stuck clearing away their own downed trees, repairing fences and sometimes roofs and otherwise cleaning up the mess.

Douglas Electric discovered that under a 2017 law it could be penalized for accepting FEMA funds by losing its nonprofit status and being taxed on the funds. It took an act of Congress, signed by the president in December, to fix that problem

Some trees damaged during the storm continue to fall, and that’s been a problem for Douglas Electric.

“We have miles and miles of brand new equipment out there ... wires, poles, transformers and such, but given we still have 120-foot fir trees falling across our 30 foot right of ways ... the challenges will continue,” said Douglas Electric spokesman Todd Munsey in an email.

The system would withstand another similar storm better, but “it would still be a major catastrophe and we should not kid ourselves,” Munsey said.

Those downed trees are creating an increased risk of a major wildfire, too, and also could be shifting the location of the next big fire.

While the area west of Interstate 5 and north of Highway 42 has historically been at lower risk for fires, that’s changed since snowmageddon, said Kyle Reed of the Douglas Forest Protective Association.

That’s because so many trees fell in that part of the county, and trees and debris on the ground create fuel for fires. Those fuels — and the increased fire risk they bring — could last for decades, Reed said.

“It’s definitely an issue and we’re going to see the effects of it for quite a while to come,” Reed said.

Already, community leaders have begun to look ahead to the next big disaster. What must we do to prepare for the next “snowmageddon,” or something worse — the long-feared Cascadia earthquake, for example?

Douglas County Emergency Manager Wayne Stinson said one thing snowmageddon illustrated for him is how unprepared many individuals and organizations were.

Some farmers whose water came exclusively from wells didn’t have backup generators for their pumps. Some agencies didn’t have back up power for water treatment and sewage systems, or for communication sites.

“We can always do better and these types of events provide us the opportunity to evaluate our responses and make changes to hopefully do better the next time,” he said.

And next time could be much, much worse.

Stinson said one way to look at this storm is as a sort of mini-Cascadia event, an eye-opener.

For individuals, it’s a good reminder that they should have at least two weeks worth of supplies on hand, including water and canned food.

“Basically if you’re prepared for a two-week power outage, you’re pretty well on your way to preparing for Cascadia,” he said.

For Roseburg Public Schools Superintendent Jared Cordon, who moved here post-snowmageddon, learning about the storm’s impact on the community left him with the feeling that a lot of good people were doing great emergency preparation within their own organizations. But they were doing it separately from others, as if they were working in silos, he said.

So he started a group called Safer Together to hold quarterly safety meetings for representatives of any organization that wanted to participate. At the first meeting in October, about 60 people showed up. For the upcoming meeting at Umpqua Community College in April, they’re expecting at least 100.

The group has allowed people at organizations ranging from first responders to schools to health care providers to start talking about how they can plan and train for the next crisis event. For example, it’s possible that schools could be designated ahead of time as warming centers, so everyone would know they should head there in an emergency.

Roseburg is putting a bond measure on the May ballot that would raise funds to build gyms at five schools that would be designed to double as community shelters.

Cordon’s also been thinking about whether schools should have two weeks of food on hand instead of four or five days worth, in case they have to feed and shelter kids for an extended period of time following a major disaster.

Cordon is optimistic that the community’s ability to handle the next snowmageddon event is growing.

“I’ve always believed in this idea that if you can create a cause that people believe in and you can build your community around that, then you can create a change in a community. And I think we’re seeing a pattern of people getting behind the cause of safety,” he said.

Douglas County Commissioner Chris Boice said both the county and the individuals in it are more prepared for the next big storm than they were for snowmageddon. But how well prepared the county depends on the severity of the event, he said.

How well the county weathers the next storm, or earthquake, is largely up to residents.

“How well we’re able to withstand any type of significant emergency like that is going to be 100% completely dependent upon how well individuals and families are prepared before it happens,” Boice said.

“Imagine a scenario where we had a significant earthquake event, but essentially every household in Douglas County had a three month supply of food and stuff at their home. That’s going to make things way easier than if the average is three days,” Boice said.