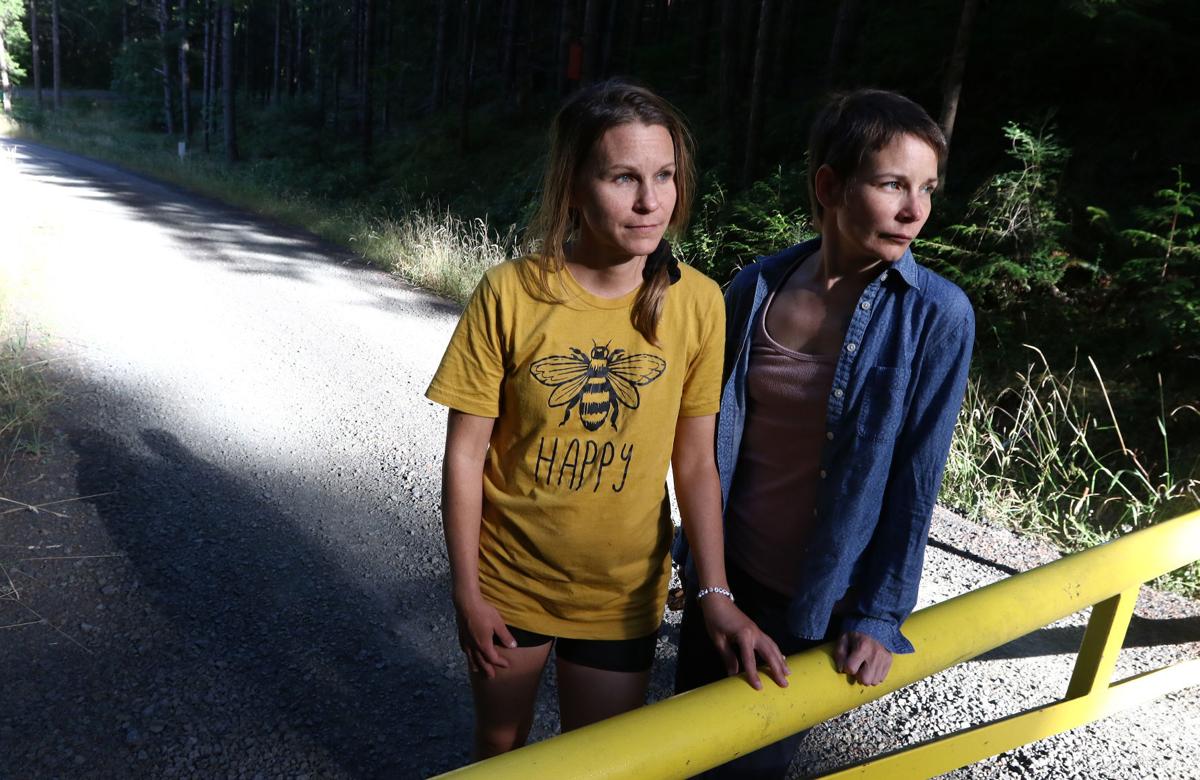 Rachel London of Park Rapids, Minnesota, left, and her sister Lori Mier of Harrisonburg, Virginia, return to the area southeast of Glide near where they survived a crash and their parents died in an accident almost 36 years ago. 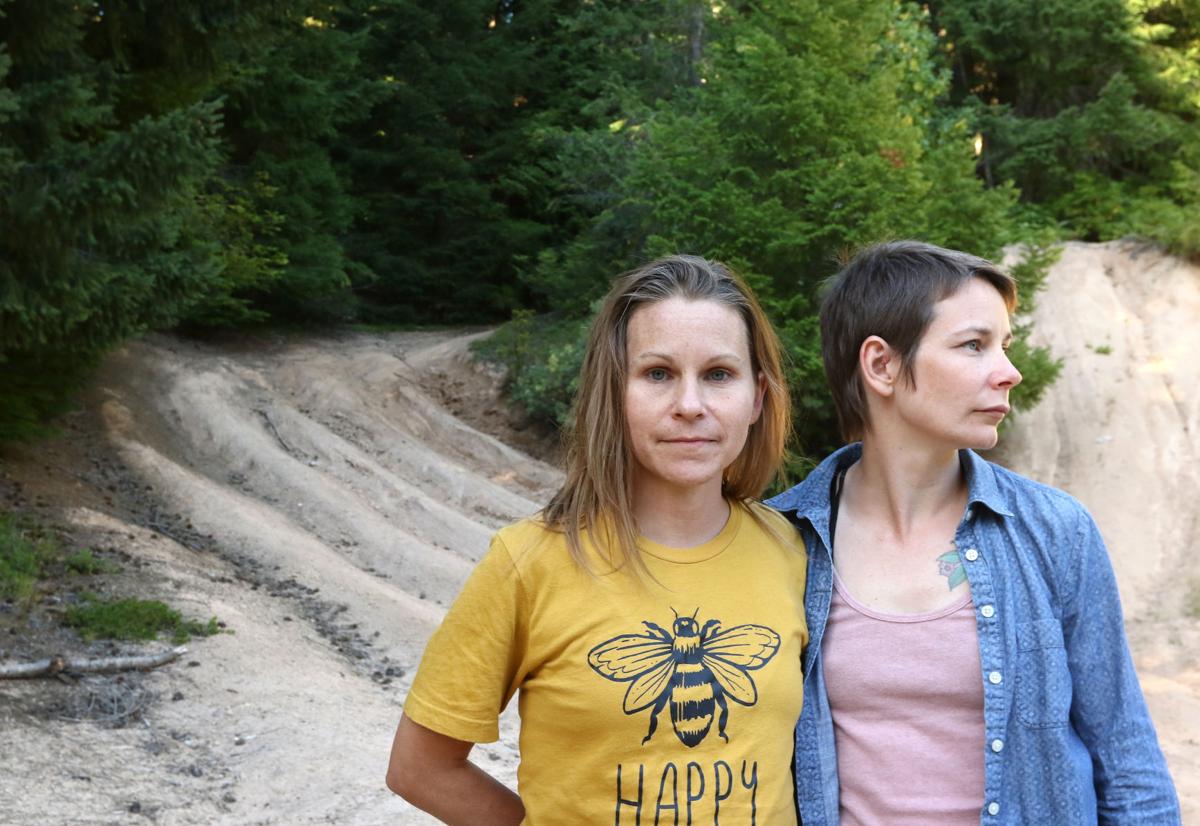 Rachel London of Park Rapids, Minnesota, left, and her sister Lori Mier of Harrisonburg, Virginia, return to a spot near Red Top Pond, southeast of Glide where they spent time with their parents the day they died in a mountainside crash almost 36 years ago.

Rachel London of Park Rapids, Minnesota, left, and her sister Lori Mier of Harrisonburg, Virginia, return to the area southeast of Glide near where they survived a crash and their parents died in an accident almost 36 years ago.

Rachel London of Park Rapids, Minnesota, left, and her sister Lori Mier of Harrisonburg, Virginia, return to a spot near Red Top Pond, southeast of Glide where they spent time with their parents the day they died in a mountainside crash almost 36 years ago.

It was about 15 miles south of Glide off of Copperhead Creek Road, when the pickup rolled 300 yards down the embankment into the deep ravine. Both were killed, but their two young daughters, who were riding in the bed of the pickup, were thrown clear and miraculously survived the ordeal.

It’s been 36 years since that tragedy in the rugged mountains in the Cavitt Creek area. Rachel London was 4 years old and Lori Mier was 3 when the accident happened. The two women came back to Douglas County last Saturday to try to locate where the crash happened, where they spent all night alone in the wilderness.

“We were in the back of the truck. Back in those days we traveled like that, we rode like that quite often,” London said.

“I couldn’t see her, I could only hear,” London said, and they continued to communicate by yelling back and forth.

The next morning Bob Bates, a hunter from Sutherlin, happened to hear the girls’ screams about 9 a.m., and if not for Bates, it might have been a long time before the girls were discovered — if ever.

Pete Wood, a deputy with the Douglas County Sheriff’s Search and Rescue team at the time, was the first member of law enforcement to respond to the crash.

In a report in The News-Review on Sept. 3, 1984, Wood said he spotted the wreckage off Copperhead Creek Road after the hunter reported it. Wood said he descended into the ravine to the wreckage before finding the girls. He found the mother and father’s bodies near the wreckage. The girls were found much higher up on the mountain near a camper shell and debris that the pickup left behind.

Wood said he heard the girls yelling and decided they were much higher on the mountain, so he went to a road up above that was much closer to their locations.

“That’s where they’d gone off, we could tell where that was,” Wood said in an interview Monday. “It was really steep, it was like a logging landing and just dropped straight off.”

It was just by a slim chance that the hunter was able to hear the girls.

“Probably nothing short of a miracle,” Wood said. “Something was watching over them.”

Mier had a broken arm, but London wasn’t hurt and considering the rugged terrain, it could have been much worse.

London said she has a pretty vivid memory of being on the hillside after the crash 36 years later.

“I remember laying on the mountainside for the whole night, I remember seeing a bear. It was probably a cub ... but it was still a bear,” London said.

Mier was thrown much farther down the mountain, and at some point the girls decided they had to start screaming if they were going to save themselves.

It wasn’t until the next morning when London noticed a few vehicles driving around on the road above, and both girls unleashed the loudest screams they could, to draw attention.

At one point London spotted an ambulance on the roadway.

“I thought, why are they just sitting there, I’m right here, and I’m so thirsty,” London remembered.

London couldn’t see her sister down below, but they continued to yell at each other.

Mier, who was just three years old, didn’t remember much of the overnight ordeal or the rescue.

“I do remember yelling back and forth and seeing an ambulance,” Mier said. “I would have memories of that sometimes when I was younger.”

Last weekend, Mier, who turns 39 this week, came from Harrisonburg, Virginia, and 40-year-old Rachel London drove to Oregon from her home in Park Rapids, Minnesota — along with some of their family members — to visit the graves of their parents and try to reconnect with family members still in the area. But they also wanted to see the area where the crash happened and other places where they played that day in 1984.

Saturday, they weren’t able to find the actual spot where the crash happened, but they found another place where they and their parents had spent time on the day of the crash. It was at Red Top Pond along South Myrtle Road, about 25 miles from Glide. Just a short distance away was a sandy pit they called “The Bowl,” where they had spent time playing in the sand and mud that same day.

It was an emotional time being back at the site for the first time since 1984 and both women were hoping it would help in the healing process.

“I feel like I’ve been here,” London said looking out at the sandy pit where they had spent time with their parents that day. “I feel comfortable like I belong here, like I played here.”

“It’s been pretty peaceful coming back,” Mier said. “I feel like it was time for me to come back.”

London said her mom and dad were four-wheeling on the day of the accident, and at one time, another young girl from one of the other families was riding with them in the back of the pickup.

At some point, the child’s mother took the girl back to their vehicle or she would have been in the crash too.

“It was pretty traumatic,” Mier said. “Really windy road, only enough room for one car, and we couldn’t find it. My sister also tried with my uncle and they couldn’t find it. So I guess roads are closed to the public now.”

London said she has been working to re-find her family and her roots.

“I couldn’t uncover any memories before the crash date, that was like the day my life began in my memory,” she said. “I have, though, in the last couple of years, done a lot of healing work.”

The sisters’ younger brother, who was 6 months old when the parents died, was at a babysitter that day.

“I know that the day they died, that I became an adult-minded child,” London said. “I’ve become intrigued with trauma now, as an adult, and I’m going through special education classes to be a special ed teacher.”

“We’re both working with healing, and work with people in some capacity,” said Mier, who has worked for several years as a social worker in Virginia, before losing her position because of COVID-19.

The two girls and the brother were kept together when they were adopted and spent their childhoods with an aunt and uncle in Illinois. The brother, Michael Nisius, 37, now lives in North Dakota.

Their father, Raymond Stanley, was a U.S. Army veteran and the family was stationed in Hawaii when the sisters were born.

Mier has one child and London is a single mother of four. Both women would like to come back to Oregon again and meet their brother here.

“I always wanted to meet Lori here and I’d like to meet Michael here,” London said. “This journey has healed me a lot.”

Winter steelhead have been a tough catch this season

Winter steelhead have been a tough catch this season