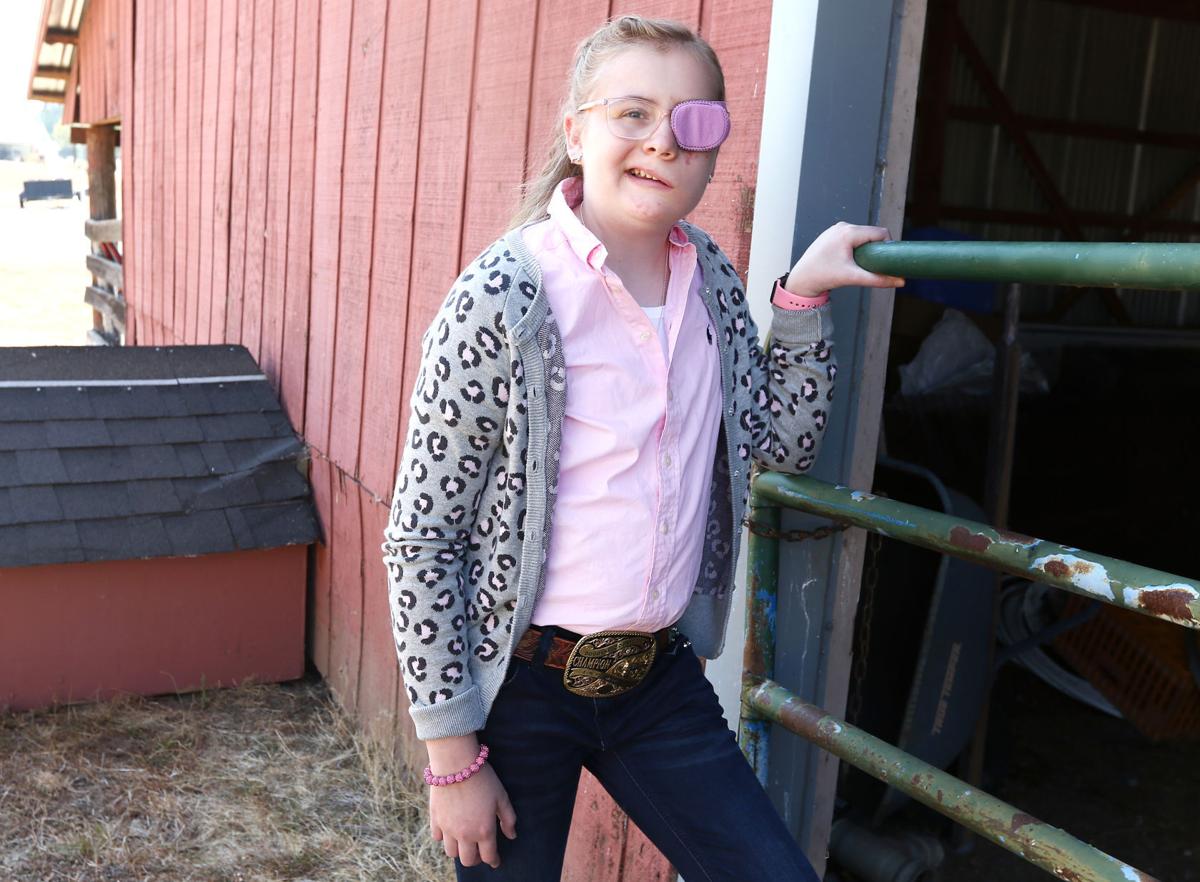 Addison Sullivan, 15, poses for a photograph at her home in Roseburg on Saturday. Sullivan raised a pig that sold at the Douglas County Fair this year for over $37,000. 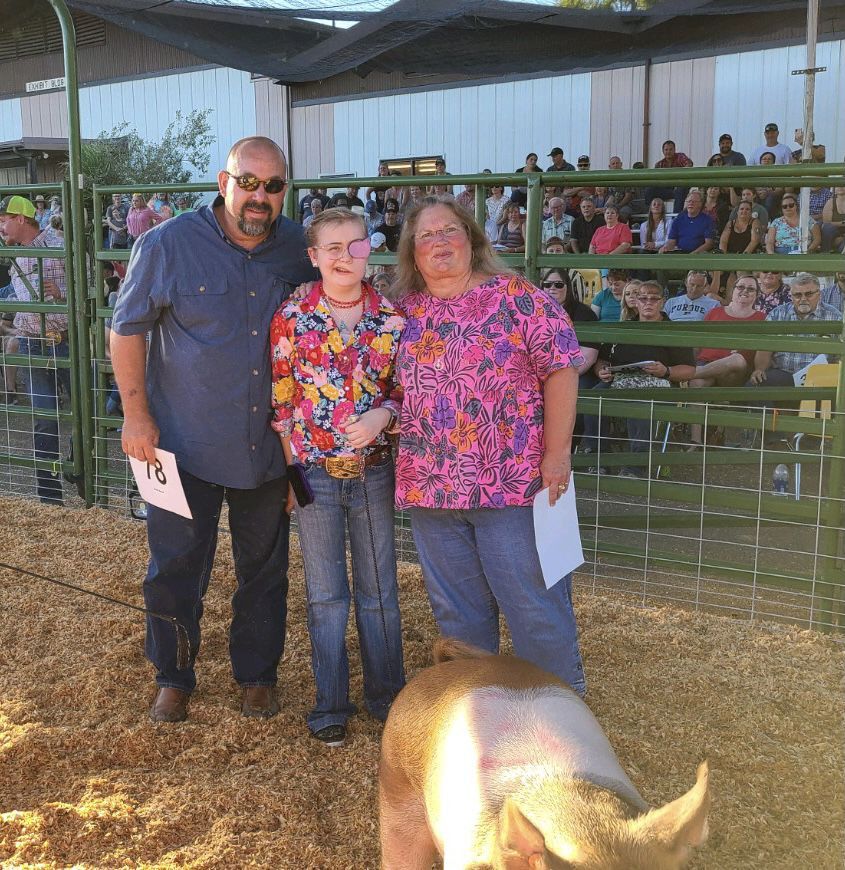 Addison Sullivan, 15, poses for a photograph at her home in Roseburg on Saturday. Sullivan raised a pig that sold at the Douglas County Fair this year for over $37,000.

For the past six years, Addison has sold a pig at the Douglas County Fair. In fact, a few bidding wars have been held over Addi’s pigs, but this year’s pig is believed to have set a county record.

After a partnership between two bidders, Addi’s pig sold for $140 a pound. At 267 pounds, the sale netted $37,380 — the most bidders Sandy Bratton and Chris Boice had ever paid for an animal before.

“She is a very, very sweet little girl,” American Home Lending owner Bratton said. “And she’s got some tough things that she is dealing with right now. I was bound and determined that I was going to have that hog this year.”

Bratton’s drive to support Addi and her family stems from Addi’s current struggle. Just before Thanksgiving in 2019, her ophthalmologist noticed her eye wasn’t dilating correctly. Testing discovered nystagmus, a vision condition that causes the eyes to make repetitive, uncontrolled movements, and eventually, after an MRI, Addison was diagnosed with a slow-growing benign brain tumor. She has undergone two surgeries — one merely a month before this year’s fair sale — and is currently on her third round of chemotherapy.

Before her diagnosis, Addi was thoroughly involved with raising her pigs from birth to sale. She’s helped birth them, cut their umbilical cord, wean them and raise them to eventually show at different shows with other members of Country Hills 4-H.

“I like it when they are really small,” Addi said of her favorite part of raising pigs. “When they get older, they are a little bit harder to pet or grab. They just run away from you. I like just showing them when they are older.”

This year, Addi needed some help. The tumor causes weakness on the left side of her body, which affects her ability to walk, as well as vision and hearing problems and headaches. Her cousins, Mallorie and McKynlee Walter, and friends Izaiah and Jazon Ames stepped up. One Ames brother even went so far as to provide physical support as she walked around the arena to show her pig.

Addi has shown six pigs during her involvement with 4-H. Bratton, Boice and other community members warred over the last two. This year’s bidding battle was just as close until Boice leaned over to ask Bratton if she would like to team up in buying the hog.

“It was a good thing to do for that young lady. She is very deserving,” said Boice, a Douglas County Commissioner. “Sandy and I, and of course a few other people in the crowd that were bidding against us, are fortunate to be blessed enough to do that for somebody with that need.”

Both buyers have been purchasing fair animals for well over two decades. Both appreciate the opportunities programs like 4-H and FFA offer kids in the area and the hard work those youth put into their projects.

“I literally didn’t care how much it cost, I was going to win that pig,” Bratton said. “This year when she came out and needed help walking, it broke my heart. She has really struggled, but she is so strong.

“She was in a wheelchair at the fair and she got out of her wheelchair to walk that pig around and when that young man had to help her walk, I thought you know what, I don’t care,” Bratton said. “I don’t care what it costs and I don’t care what she does with the money, I want her to have whatever it was she wanted.”

After her second surgery in July, which removed between 50-60% of the tumor that sits right by her brainstem, Addison started her third round of chemotherapy. The family will learn more following testing at the end of September.

“It’s been tough,” said Josh Sullivan, Addi’s father. “Obviously, there are a lot of unanswered questions. But, then you look at the alternative. It could be a lot worse. We’re just thankful each day that we get to spend time with her.”

Until then, Addi plans to start her sophomore year online at Roseburg High School, play with her dogs and search for the next great mystery novel. She’ll donate her $37,380 to her 4-H group, Doernbecher Children’s Hospital and the Ronald McDonald House.

“Through all this, she maintained a 4.0 GPA and continues to put others before her, making sure they’re taken care of,” her father said. “She never really complains. She’s pretty resilient.”

“She doesn’t give herself enough credit,” step-mom Sadie Polk agreed.

Erica Welch is the special sections editor for The News-Review. She can be reached at ewelch@nrtoday.com.

Congratulations, Addison. That's a remarkable accomplishment. I'm talking both about the sale of your pig and your courage in facing a serious health challenge. Hope all goes well for you every single day.

Outstanding job Mr. Boice for using the gifts you have been given to help a child. I know that so many times comments are only to be divisive and so I solute you and I am proud to call you a Commissioner.