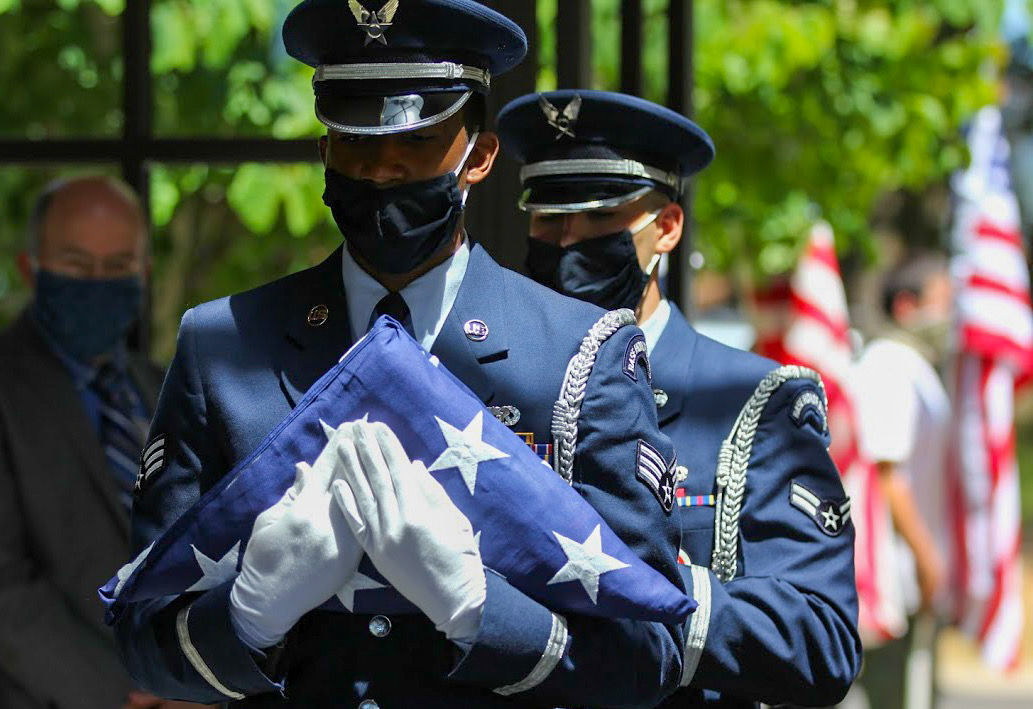 U.S. Air Force personnel present the U.S. flag to Sharon Berube in honor of her father Maj. Don Kitzman during military services at the Roseburg National Cemetery on Friday. 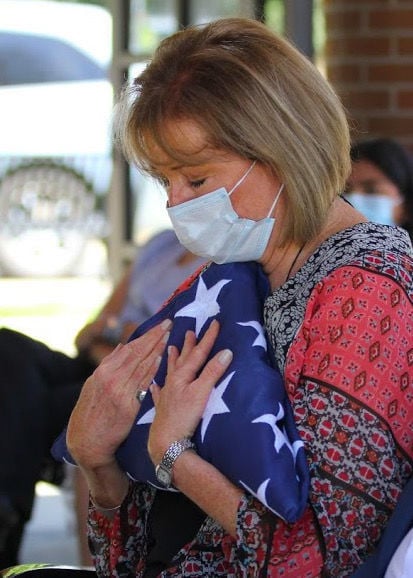 Sharon Berube, whose father, retired Air Force Maj. Don Kitzman, a World War II and Korean War bomber pilot, hugs the flag given to her in honor of her father, who was buried Friday, July 10, at the Roseburg National Cemetery.

U.S. Air Force personnel present the U.S. flag to Sharon Berube in honor of her father Maj. Don Kitzman during military services at the Roseburg National Cemetery on Friday.

Sharon Berube, whose father, retired Air Force Maj. Don Kitzman, a World War II and Korean War bomber pilot, hugs the flag given to her in honor of her father, who was buried Friday, July 10, at the Roseburg National Cemetery.

Major Donald Kitzman’s story began on Jan. 2, 1923, in What Cheer, Iowa, (Yes, that’s a real place) — population 624. It ended last Friday with full military honors and burial at the Roseburg National Cemetery, including four F-15 jets from the Kingsley Air Force Base in Klamath Falls, flying in the missing man formation.

Kitzman died March 19 at the age of 97 in Roseburg but the ceremony was delayed because of the coronavirus pandemic.

Kitzman had a long military aviation career. He was a B-17 bomber pilot in World War II and flew 29 missions, and all but two of those were in Germany. He was part of the Eighth Air Force, 91st Bomb Group, 322 Squadron.

In November 1942, Kitzman enlisted in the Army Air Corps at age 19 and obtained his pilot wings in 1944 at 21. He was assigned to fly B-17s out of Bassingbourn, England, during World War II.

On Kitzman’s 29th mission, his plane was shot down and he had to bail out.

“There were nine people on his crew, the plane was on fire and they all bailed out, but one got stuck in the opening of the plane and my dad kicked him in the butt so he could get out,” said Sharon Berube, daughter of Kitzman. “He actually landed in a tree and Hitler Youth wanted to shoot him, but a farmer came along and said, ‘No’ and they took him to a holding shed.”

Kitzman was a prisoner of war in two different German prison camps, for almost six months from Nov. 2, 1944, to April 29, 1945. After more than two months in the first camp, the prisoners had to walk for 11 days and then were loaded into a crowded boxcar for two days before arriving at a camp in Mooseburg in southern Bavaria. Kitzman stayed in that POW camp until it was liberated and the prisoners were flown to Camp Lucky Strike in France.

Kitzman flew B-29s and B-36s and finally B-52s. He not only served in World War II, but he also flew bombing missions in the Korean War.

In 1953, Kitzman was assigned to combat in Korea and flew 16 missions. He also made two successful emergency landings after engine malfunctions.

After Korea, he was assigned to Fairchild Air Force Base in Spokane, and would fly up and down the West Coast. That’s when he fell in love with the Northwest and eventually moved to Southern Oregon.

Kitzman remained an officer in the Air Force until 1965 when he retired as a major.

Kitzman took a job in the wood products industry and went to work in White City near Medford. He eventually landed a job in Dillard, leading to him and his wife, Betty, settling in Roseburg for good.

Kitzman was heavily involved in the community. He became director of the Red Cross in Roseburg and was a longtime member of St. Paul’s Lutheran Church.

“My mother was a kindergarten teacher there (at the church) and my father held every leadership position possible,” Berube said.

Berube said her father’s integrity stood out to her the most. Unless prompted by others, he was reluctant to talk about his war experiences and the horrific conditions he and other prisoners had to endure.

“He was humble and didn’t draw a lot of attention to himself,” Berube said. “His integrity was impeccable, he took pride in his appearance, physical fitness and a love of God, country and family. He was really one of the finest of the Greatest Generation.”