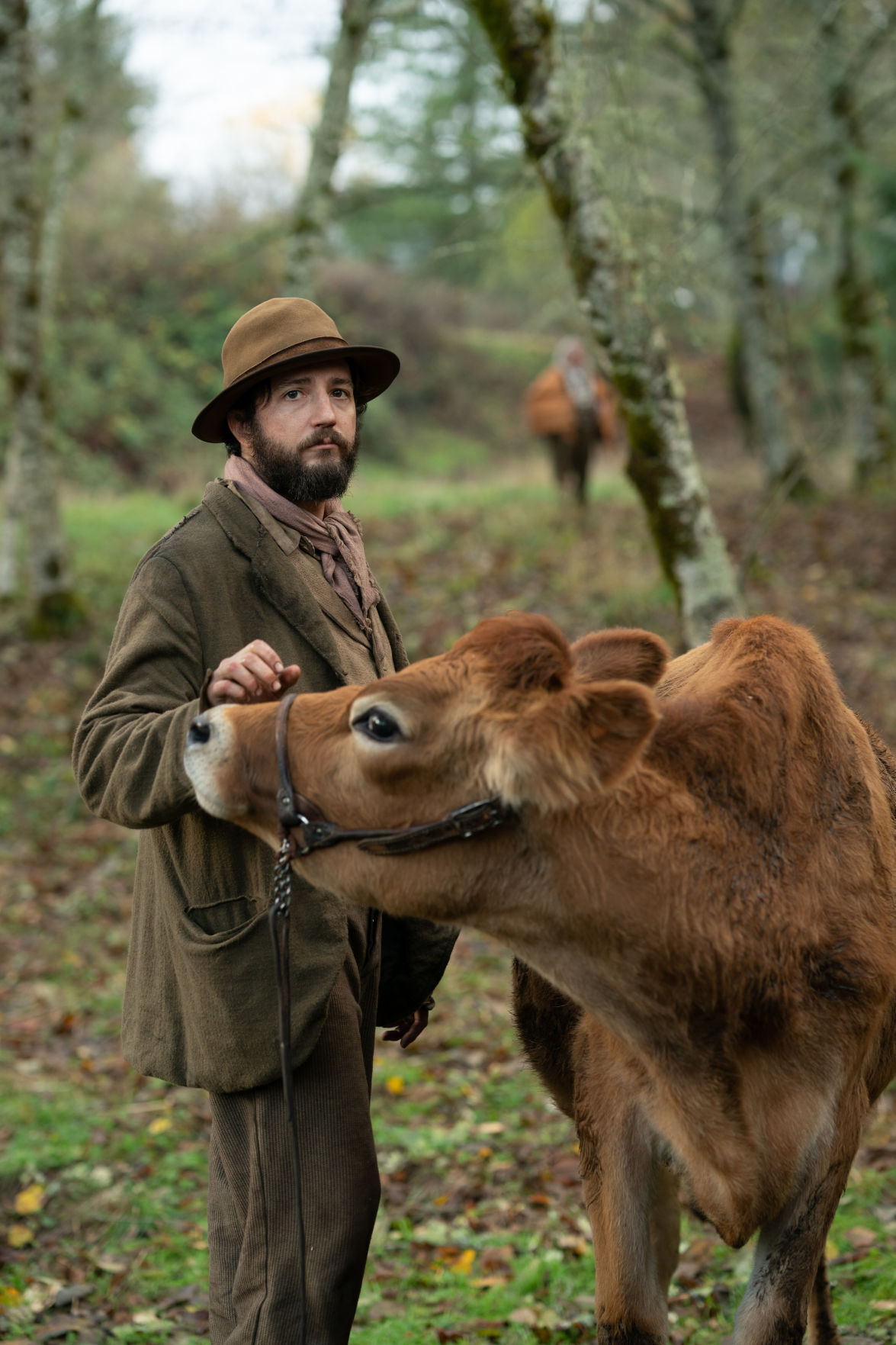 John Magaro, who plays Cookie Figowitz in ‘First Cow,’ with Evie the cow. 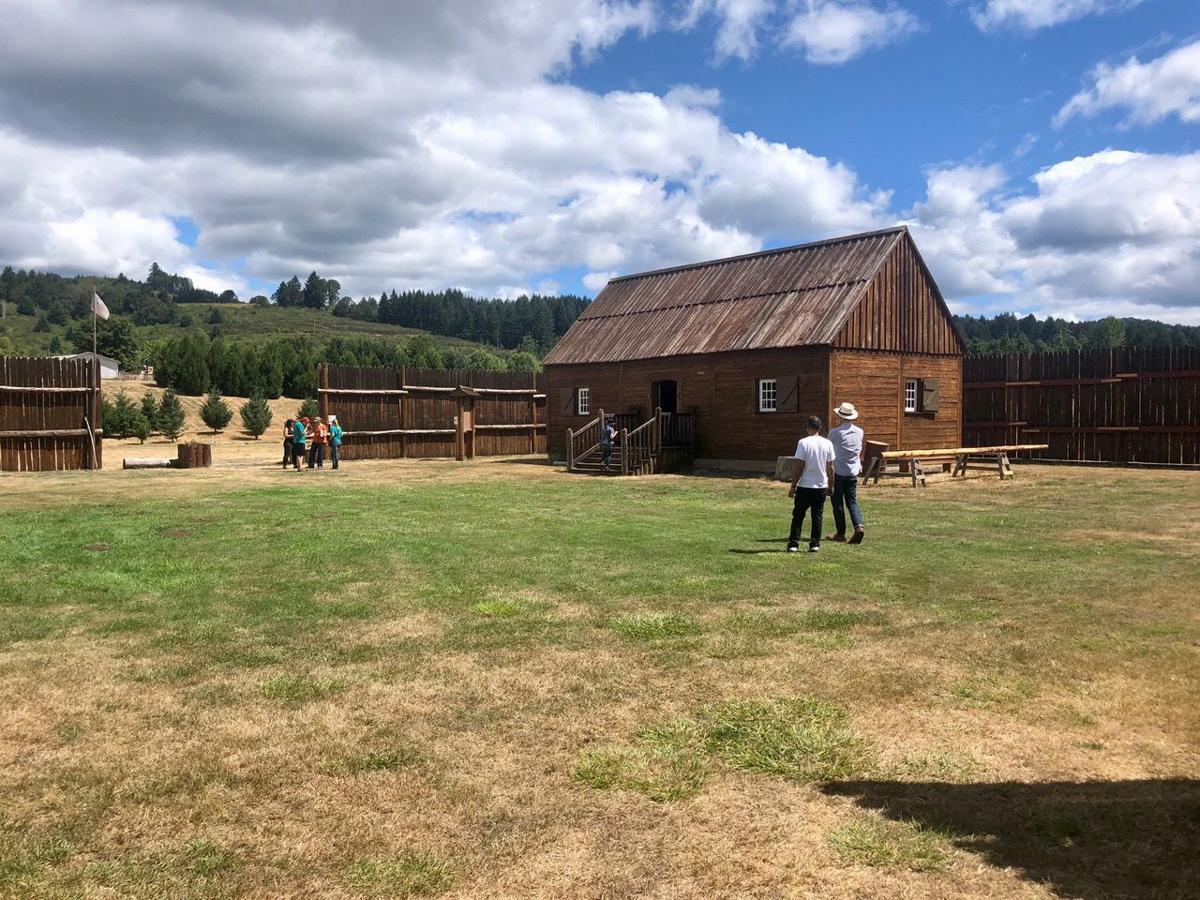 A look inside Fort Umpqua before crews from the Elkton Community Education Center and A24 began adapting the fort for film. 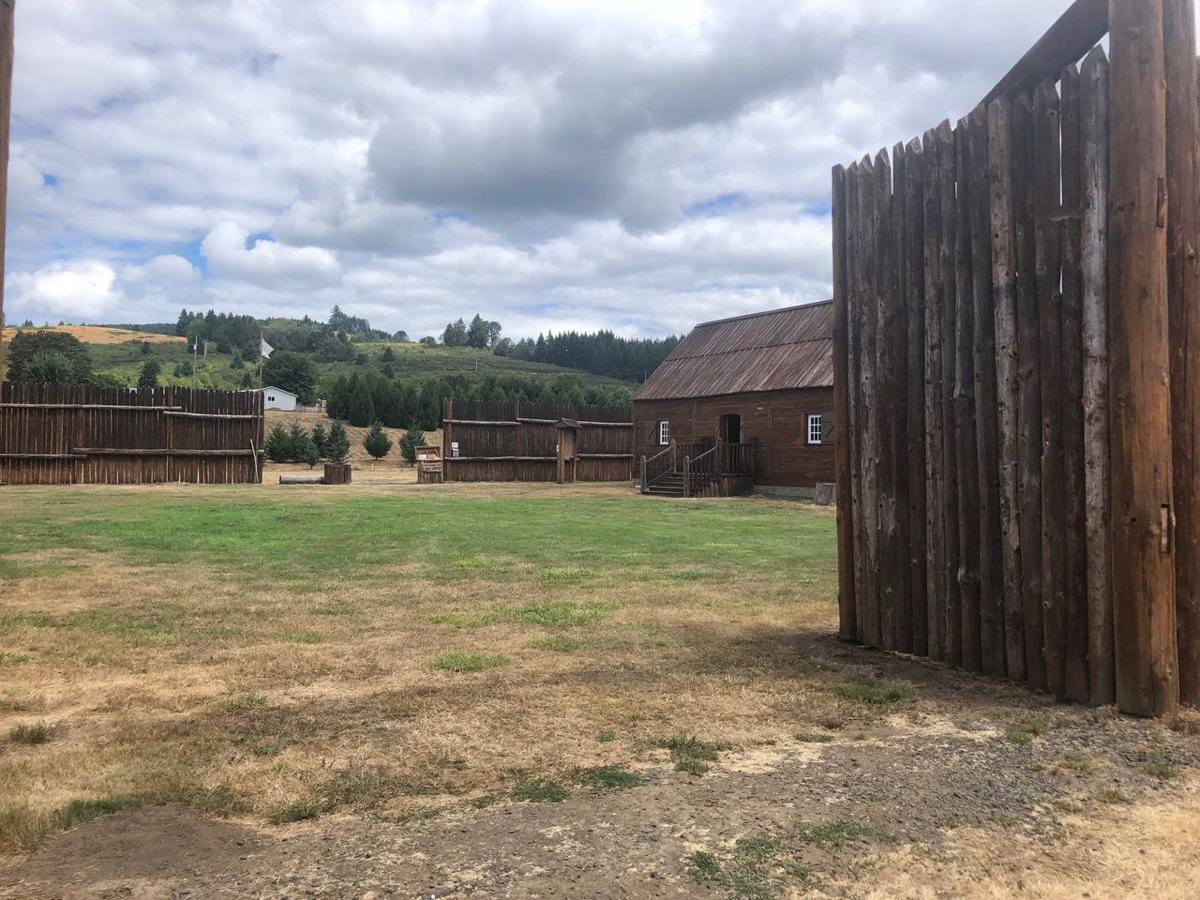 A look inside Fort Umpqua before crews from the Elkton Community Education Center and A24 began preparing the fort for film. 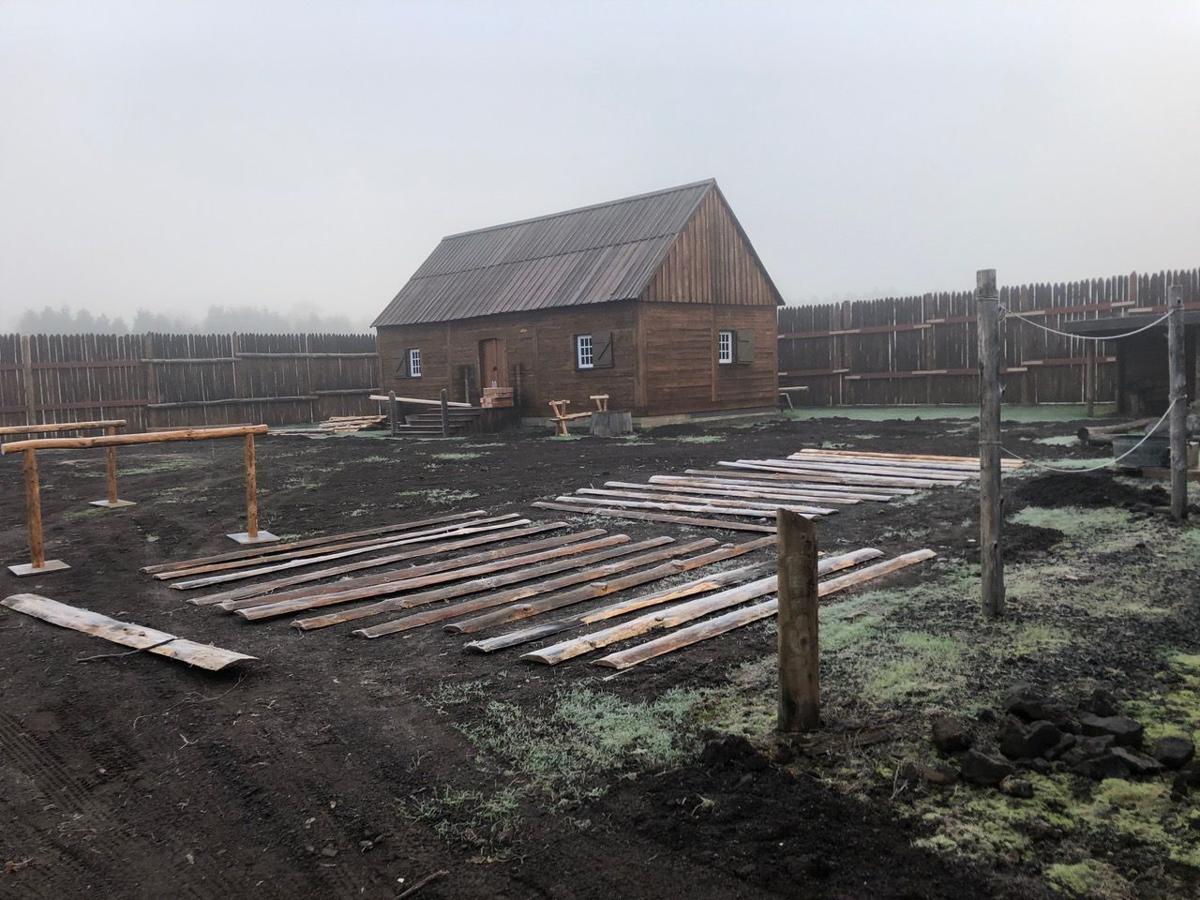 Fort Umpqua after 300 yards of dirt was added to adapt the location for film. 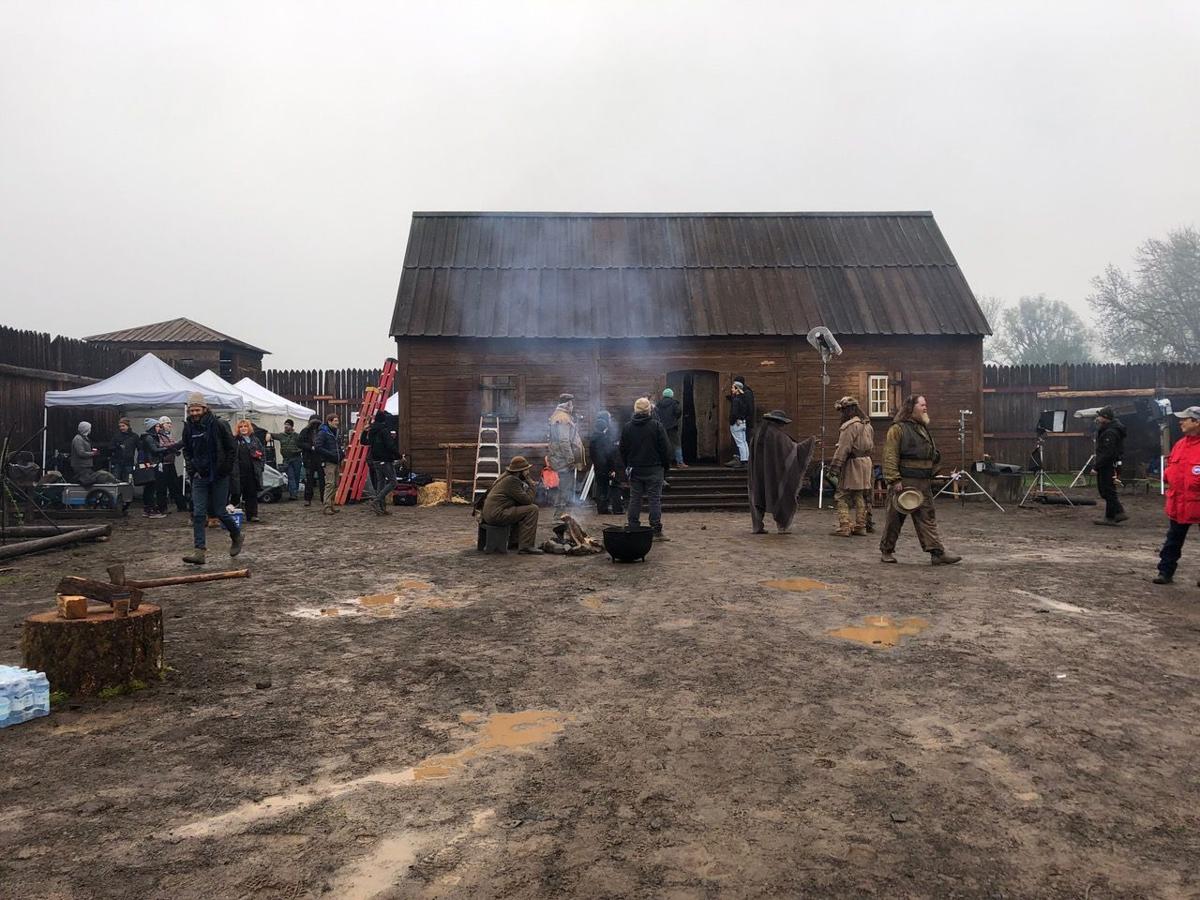 Actors and crews inside of Fort Umpqua after it was modified for film. 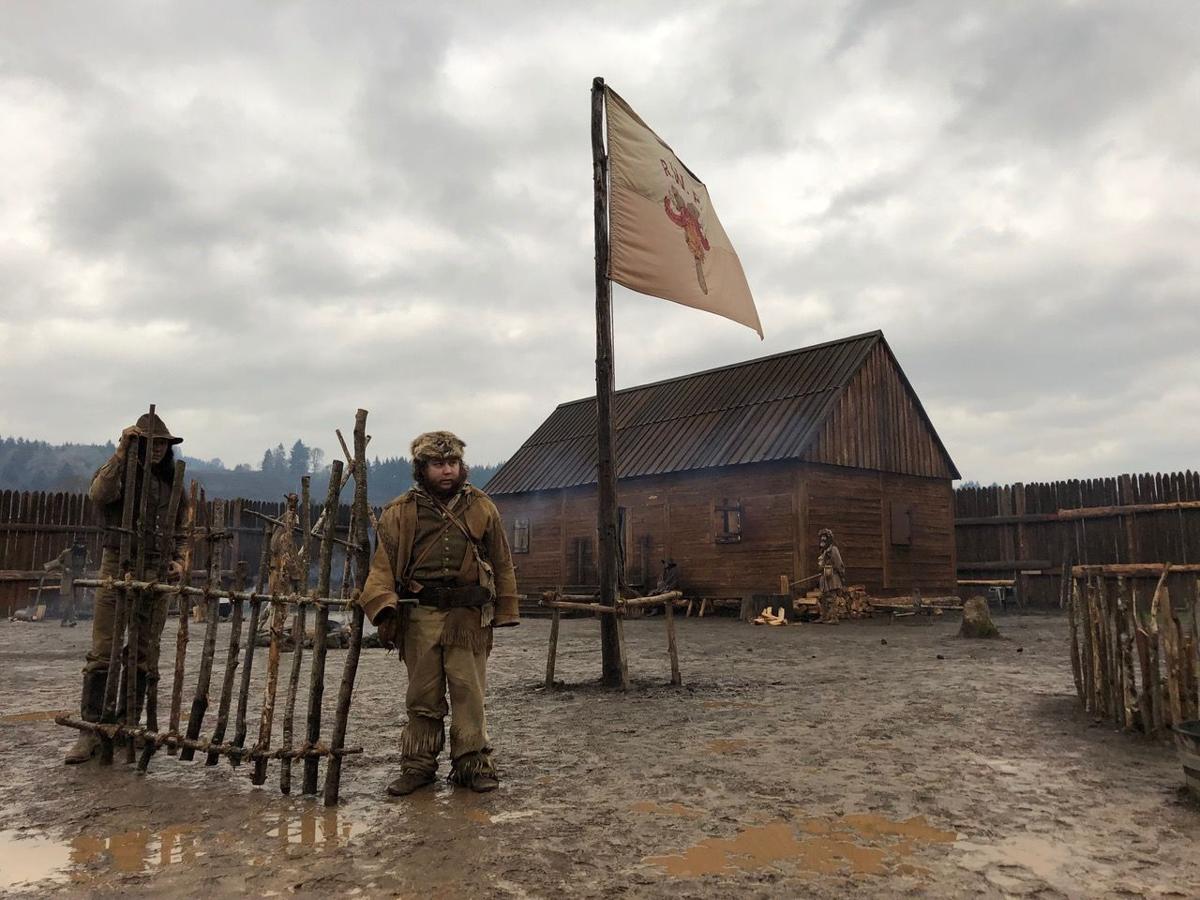 An extra stands inside Fort Umpqua after 300 yards of dirt was added to alter the fort for film.

John Magaro, who plays Cookie Figowitz in ‘First Cow,’ with Evie the cow.

A look inside Fort Umpqua before crews from the Elkton Community Education Center and A24 began adapting the fort for film.

A look inside Fort Umpqua before crews from the Elkton Community Education Center and A24 began preparing the fort for film.

Fort Umpqua after 300 yards of dirt was added to adapt the location for film.

Actors and crews inside of Fort Umpqua after it was modified for film.

An extra stands inside Fort Umpqua after 300 yards of dirt was added to alter the fort for film.

When David Baird took the job as facilities manager for the Elkton Community Education Center six years ago, he had no idea that he would one day be helping retrofit the fort he helped build for the film industry.

Nor did he have any idea that film would eventually be named the best movie of 2020 by Time Magazine.

That movie was “First Cow,” a drama written and directed by Kelly Reichardt. The film is based off “The Half-Life,” a book by Portland writer Jonathan Raymond. Set in the Oregon territory in the 1820s, it follows a blossoming friendship and business partnership between trained cook Otis “Cookie” Figowitz (John Magaro) and Chinese immigrant King Lu (Orion Lee).

The two share a common goal: making a living in a new land. To do this, they risk their lives stealing milk from the region’s lone cow. Using King Lu’s innovative entrepreneurial skills and Cookie’s baking abilities, the two use the stolen milk to take the first steps towards their shared dream.

The movie was partly filmed at Elkton’s Fort Umpqua. According to Production Designer Anthony Gasparro, the crew scouted several fort replicas across the state before choosing Fort Umpqua.

“Elkton was chosen for our film because of Fort Umpqua,” Gasparro said. “A fair amount of the script takes place around a fort and its fur trading post. Fort Umpqua (and) the great people that worked there made Elkton our obvious choice.”

Gasparro said several elements of the fort had to be removed or covered because they were too modern, such as removing the handrails to the saloon, covering up the cement foundation, removing some of the metal bracings, even building temporary walls to fill entrance gaps made to accommodate visitors. The biggest change was the 30 truckloads of dirt brought in to cover the grass “to illustrate how the fort would have been recently built and with all the foot traffic and abuse of the terrain it would not be a place of green grass but of grit, mud, water and smoke.”

“The fact that life in the early 1800s was hard needed to ooze from every frame. Manicured grass was not an option so we trucked in many many loads of dirt to cover it. The bones of the fort itself were great,” Location Manager Janet Weiss said. “The production designer added authentic, era-appropriate touches to the fencing and structures, and set dressing to create an immersive world from a different time. It looked real!”

Crews also made changes to the granary building, creating a false partition that cut the building in half to allow for the smaller saloon they were trying to create. They created a bar and decorate with furniture and lighting that would be appropriate for the time period. The interior, Gasparro said, had such great woodwork that they incorporated it into the design.

As facilities manager, it was Baird’s job to help wherever he could. This included helping spread the dirt and work on the walls that they didn’t want film crews to do.

“It was a very cool experience. It was very impressive to see all the different little groups of people that worked on the movie and the changes they made at the fort in just a very, very short period of time,” Baird said. “I’ve been in construction my whole life, but I’ve never seen a group of people able to make the temporary changes they made in such a short period. It was quite the change down there. The inside of the fort looked very, very realistic for what I think it would have looked like in the 1800s.”

All 300 yards of dirt were left behind after filming ended. It took volunteers about a week to clear out the fort and return it to the manicured grounds from before. Some of the dirt will be used to level an area for a new building. The rest may go toward filling in one of the property’s ponds, though Baird joked that he wished he could just push it all into the river.

Elkton Community Education Center staff were asked to keep production quiet as to not attract unwanted attention. Some Elkton residents, though, were included. Baird said the garden manager’s husband participated in one scene that was later cut from the film and a former center volunteer returned to help manage the animals. Both Baird and the center’s ECOC Executive Director Marjory Hamann are included in the film’s credits. Baird said he purchased a copy of the movie so he could pass it down to his grandson.

“It was a really cool part of my career, seeing it happen and being involved in it. I was really excited about it when it happened and I was a lot more involved in it than I thought I would be,” Baird said. “My adult daughters think it is pretty cool that their dad’s name is on the back of a movie. My name is there and Marjory’s name is there. We think we are pretty cool because we have our name on a movie.”

Film crews also seemed to enjoy the experience of filming in Elkton. Weiss said it was the people that set the location apart from other film locations.

“It was a pleasure working with such kind folks. Everyone we came into contact with was helpful, friendly and welcoming. We were down there for about 5 days and loved every second,” she said.

Gasparro agreed, though he also said the food had something to do with it.

“I know that I can speak for the entire (art department), we were very happy to have Tomaselli’s Restaurant to look forward to some great meals. Elkton was really the heart of First Cow.”

Home and Garden Show off and running at Douglas County Fairgrounds

Home and Garden Show off and running at Douglas County Fairgrounds