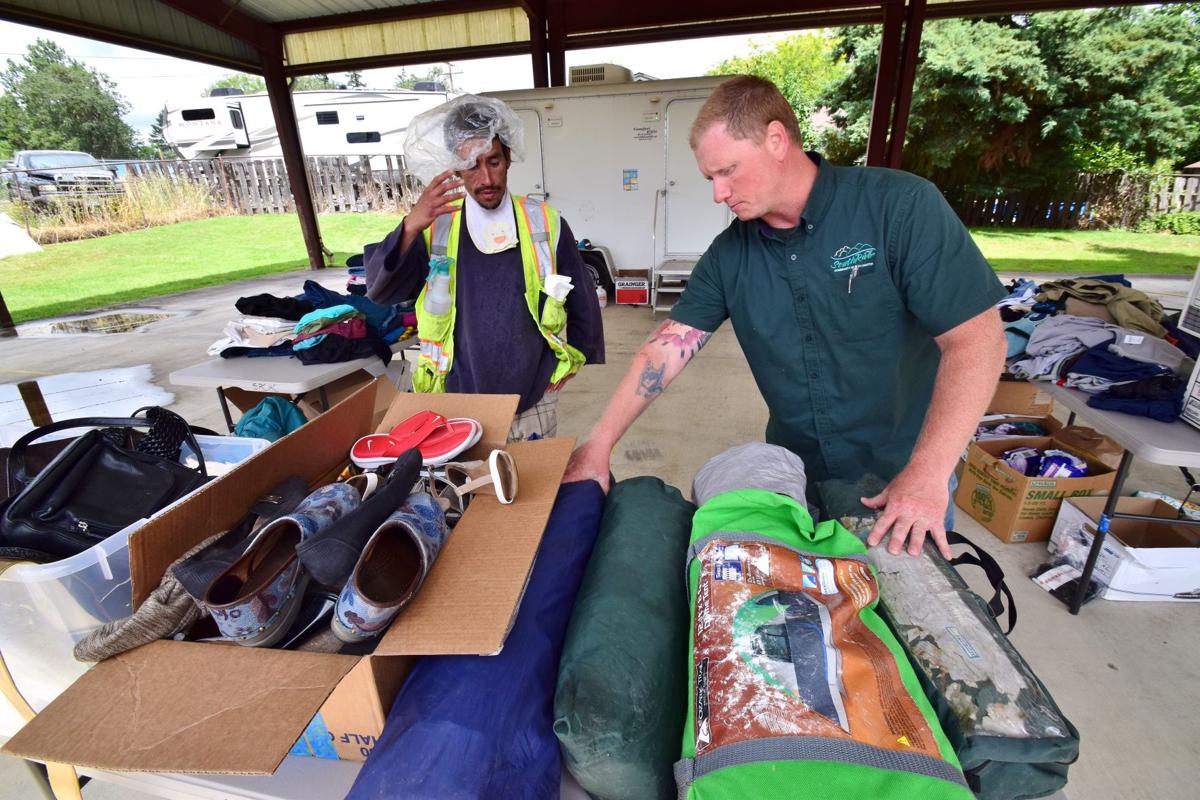 Wayne Ellsworth, homeless outreach coordinator for SouthRiver Community Health Center in Winston, offers clothing and other items to Joseph Alvarado Jr., a self-described transient, after his shower at the facility Tuesday. 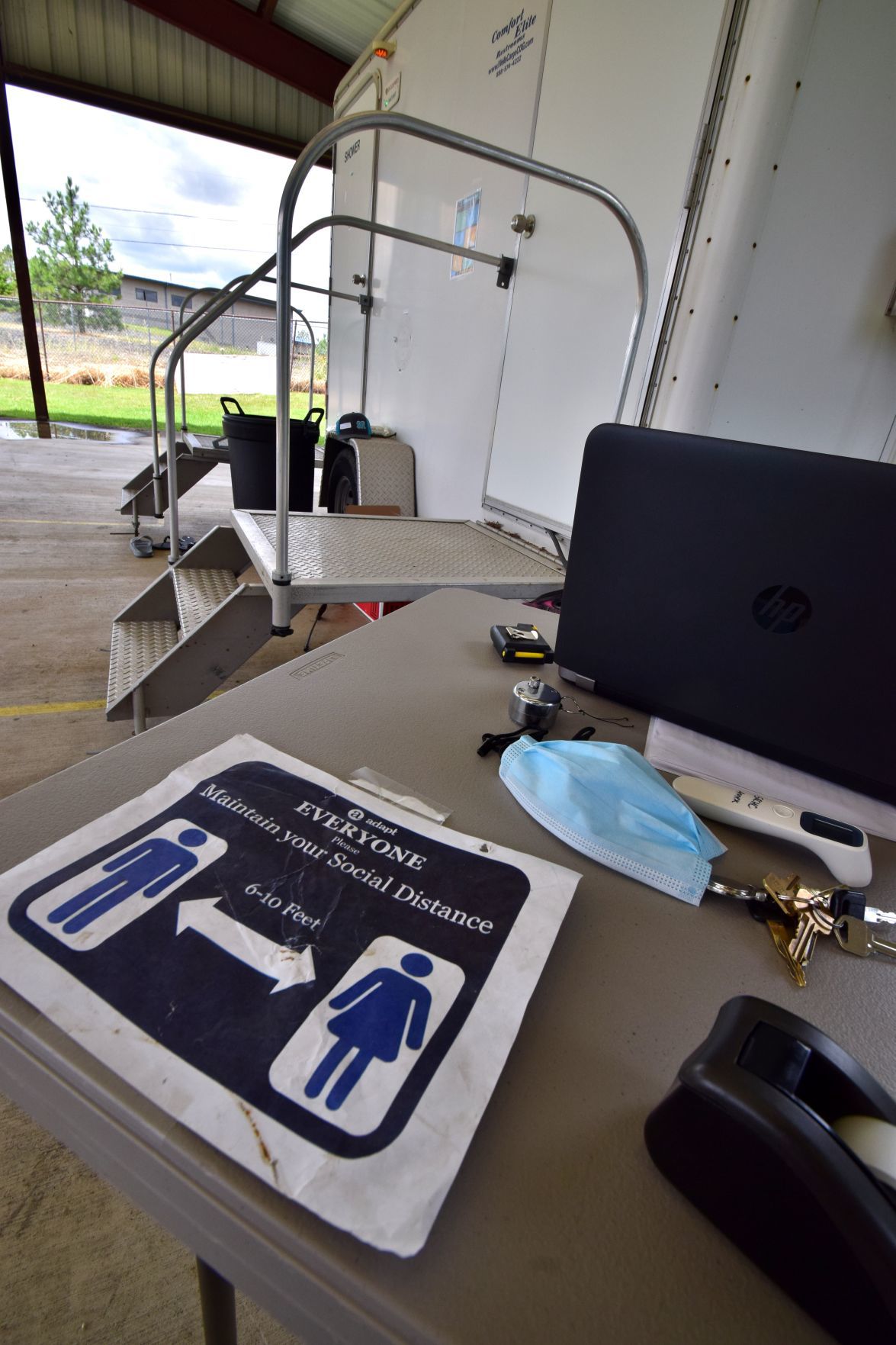 PPE materials, including a facemask and a therometer, lie next to the portable shower being used as part of the free shower program for homeless people at SouthRiver Community Health Center in Winston on Tuesday. 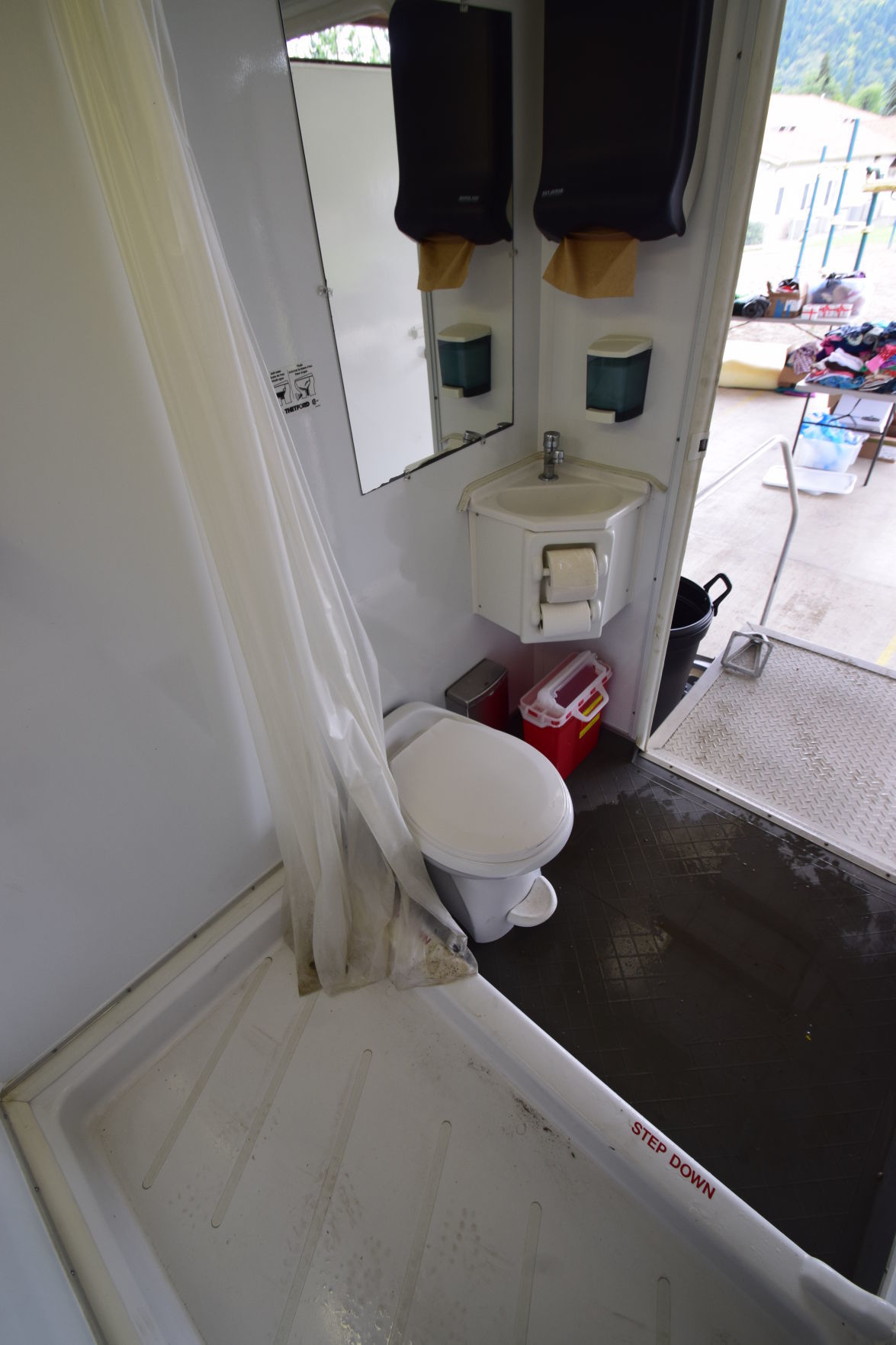 The portable shower facility at SouthRiver Community Health Center in Winston offers all the facilities of a typical residential bathroom to homeless people. 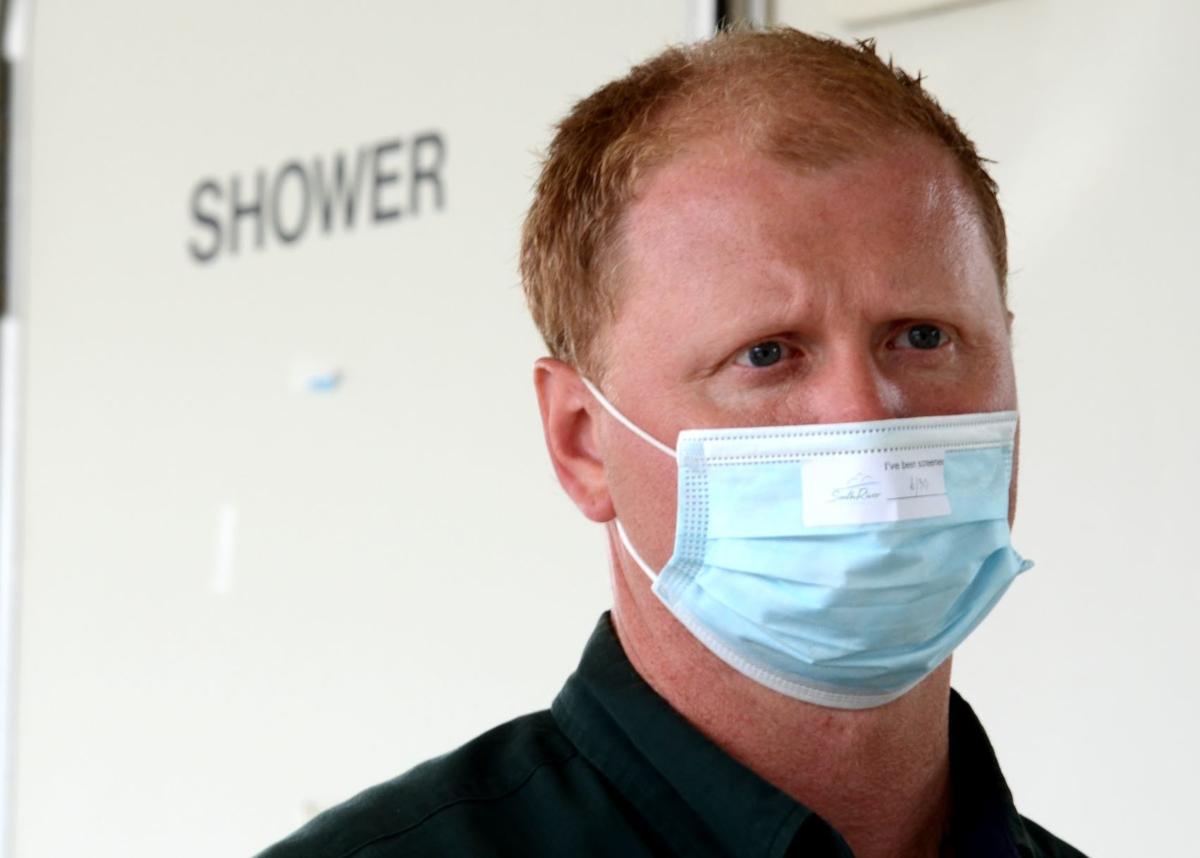 Wayne Ellsworth, homeless outreach coordinator for SouthRiver Community Health Center in Winston, offers clothing and other items to Joseph Alvarado Jr., a self-described transient, after his shower at the facility Tuesday.

PPE materials, including a facemask and a therometer, lie next to the portable shower being used as part of the free shower program for homeless people at SouthRiver Community Health Center in Winston on Tuesday.

The portable shower facility at SouthRiver Community Health Center in Winston offers all the facilities of a typical residential bathroom to homeless people.

WINSTON — A small, unassuming silver trailer sits on the half-court line of a covered basketball court at the SouthRiver Community Health Center. For two weeks, it has given dozens of people without housing the chance to shower.

Joseph Alvarado Jr. used the shower for the second time Tuesday. Being homeless, he said, he would usually have trouble finding somewhere to clean up.

“This one’s really nice, because you have privacy,” Alvarado said. “And hangers so you can get dressed and undressed, and use all your hygiene products, so you can be fresh and ready to go.

“You feel clean, so you can talk to people and smile,” Alvarado said.

The SouthRiver Shower Program runs 10 a.m. to 4 p.m. every Tuesday in Winston, and has had two sessions since opening on June 15. Along with a shower, the trailer’s two unites have a toilet, sink and mirror. There is also a small dressing room attached, along with a sharps container for safe needle disposal. The space gets disinfected between each use.

Since launching, the program served 14 attendees at the first event and 12 at the second.

Wayne Ellsworth, homeless outreach coordinator for SouthRiver, said the third session was a little slower Tuesday, with only seven people coming by throughout the day. He kept busy at a table next to the trailer by taking phone calls to help people navigate the Oregon Health Plan and other services.

Ellsworth screened everyone who came in for COVID-19 by taking their temperature and asking qualifying questions about symptoms, contact and testing. He said there have been no cases so far.

When Alvarado emerged from the bathroom wearing a shower cap, Ellsworth showed him one of three tables piled with donated clothes he could choose from. The program offers every participant two sets of clothes, garbage takeaway service and, as of this week, hygiene kits donated by the Salvation Army.

“People really enjoy the fact that they can have sanitation where they normally wouldn’t. They are very happy that these services are provided now — and I don’t want to put this 100% on the shower trailer — it happened to create a ripple effect that the community partners and myself were really hoping for,” Ellsworth said.

That effect, according to the program, is that two people who went to the first session returned with jobs. Another started going to SouthRiver’s Medically Assisted Treatment program to start addiction treatment.

“Really, that was the intent: to be able to offer something as simple as a shower, and be able to create a sense of being clean, of accomplishment, so they can make that next step,” Ellsworth said.

Before they could start offering showers, Ellsworth searched across the state for a suitable trailer, along with Roseburg City Councilor Andrea Zielinski and Bryan Trenkle, the director of Greater Douglas United Way. They eventually found one on Craigslist for $12,500, and jumped at the chance to spend much less than the $40,000 average price for similar used trailers.

The team worked to get the funding from United Way, which purchased the trailer with financial assistance from the Ford Family Foundation.

Zielinski said she hopes to expand the program, starting with a second trailer to accommodate more people.

“I’m super excited to be able to bring this to our community,” Zielinski said. “I think it’s going to be life changing for people.”

This was a great effort to make happen. If it were not for Wayne Ellsworth, Andrea Zelinski, and the United Way, this would not be happening now. So River too for allowing Wayne to do this.

I give a special shout out to Andrea and Wayne for making this happen relatively inexpensively, and quickly once Andrea got involved.

I anticipate its arrival in Roseburg soon. It will not only provide the things in this story, we can start bringing all service providers to help people where they are with what they need to get off the streets.

Treating people with love and care; you might be on to something. Well done!