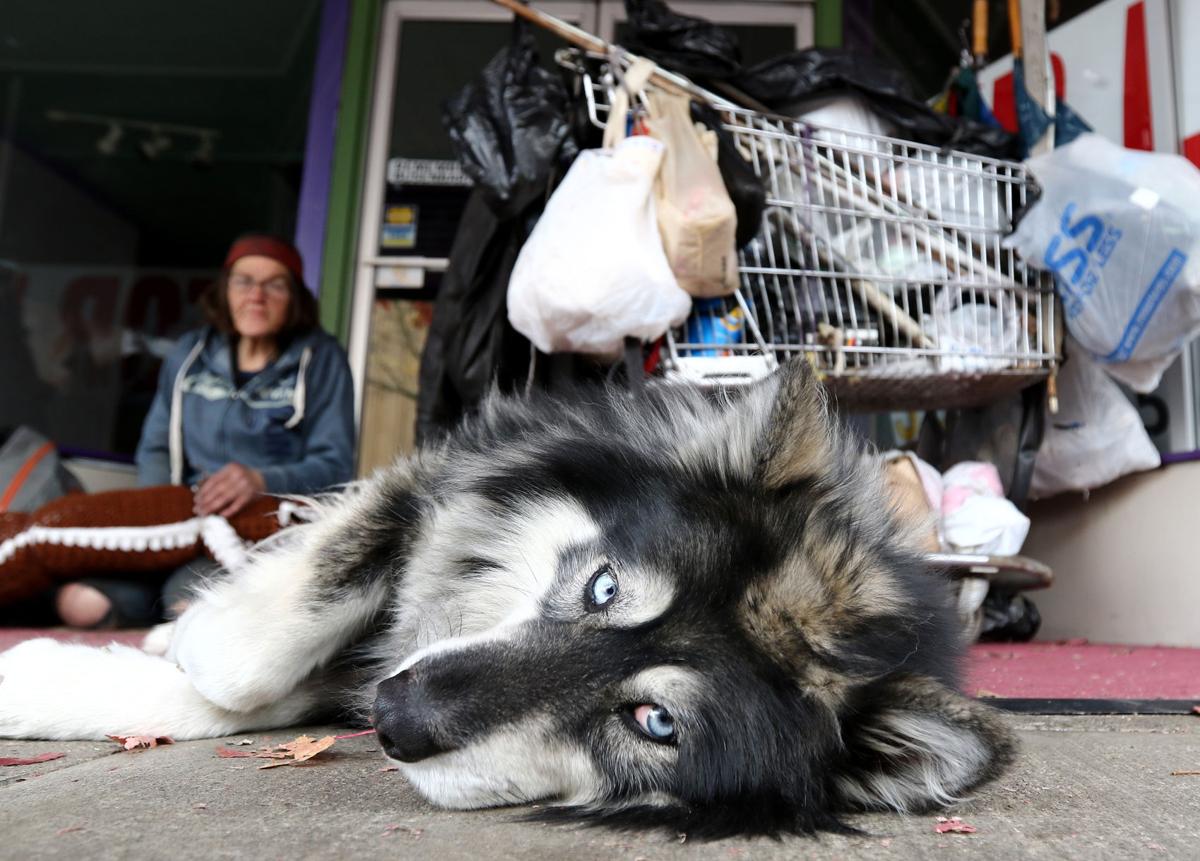 Star and her dog Kiya in downtown Roseburg on Nov. 2. 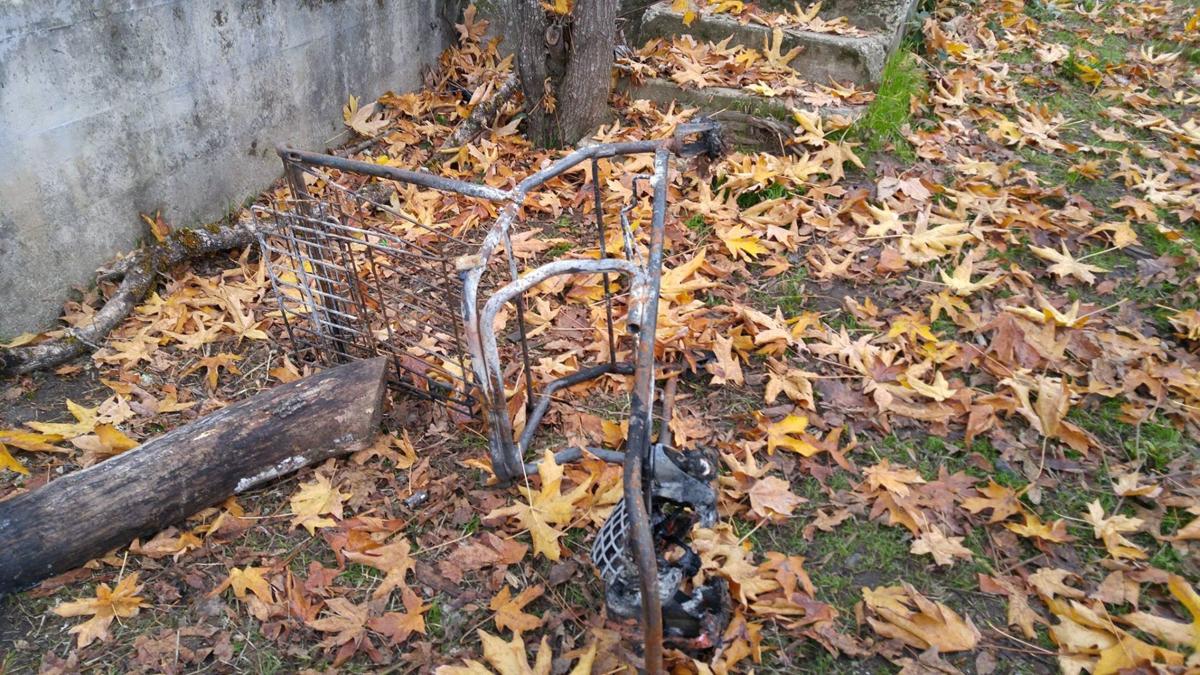 Vandals torched the belongings of a woman known as Star when she was sleeping in Deer Creek Park in mid-November.

People who are homeless have to take extra precautions when they are living on the streets. 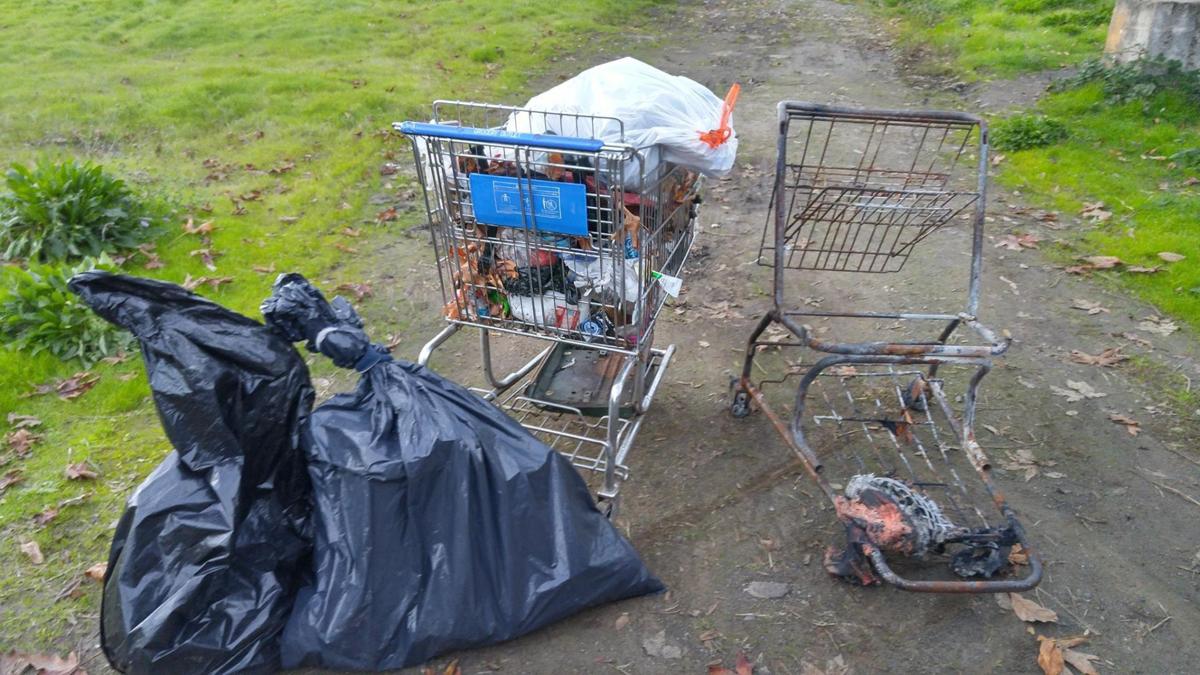 Roseburg Dream Center’s Under the Bridge People ministry cleaned up damages left behind when vandals destroyed a homeless camp. People who are homeless are constantly at risk of losing their things to theft or destruction.

Star and her dog Kiya in downtown Roseburg on Nov. 2.

Vandals torched the belongings of a woman known as Star when she was sleeping in Deer Creek Park in mid-November.

People who are homeless have to take extra precautions when they are living on the streets.

Roseburg Dream Center’s Under the Bridge People ministry cleaned up damages left behind when vandals destroyed a homeless camp. People who are homeless are constantly at risk of losing their things to theft or destruction.

The community knows her as the woman with the stoic husky. They travel together through downtown Roseburg with a grocery cart full of everything they own.

She goes simply by Star. She speaks brusquely, but give her time and she will tell you her story. Her dog, Kiya, has icy blue eyes and is as large and serious as a wolf. Star has a spiritual connection with the mild-mannered husky, just as her Native American ancestors might have felt toward wild wolves long ago.

Kiya also serves as a form of protection.

Living on the streets is dangerous. Star can tell you, because she has been attacked several times. Just recently, someone tried to set her tent on fire while she slept. The transients — who she didn’t know — eventually left.

Days later, in mid-November, she found her tent and cart had been successfully torched. Her bed, her clothes, her food; what little she needed to survive was completely destroyed.

“I can’t figure out why they would do something like this,” she recalled later.

She kept the destruction to herself. She salvaged what she could from the ash, and set out with Kiya on a leash in search of new things. A new home. Something to eat.

Volunteers with Roseburg Dream Center’s Under the Bridge ministry were handing out lunches in Deer Creek Park when they heard the news. A group of people who had been living in the park asked for help in cleaning the debris left by the arson.

“When I found her, I discovered that the fire had been set a few days prior, and she had only slept for a few minutes in the last two days due to the cold wet nights and police forcing her to keep moving,” said Christopher Hutton, an organizer with the ministry.

Star had been camping in Deer Creek Park when her stuff was destroyed. The public park sits under Southeast Stephens Street, and rests along an embankment of the South Umpqua River. People who are homeless often seek refuge there. Because of its location — tucked away, out of the public’s sight — they can usually camp out in peace.

The ministry asked for donations to replace her belongings through its Facebook page. It was flooded with support, and was able to get her a tent, clothes, dog food, soup, a tarp and pillows. It even replaced her grocery cart with a retired one from a nearby business.

Star doesn’t feel safe camping in Deer Creek Park any more. Now she stays on the porch of an abandoned property. She keeps a knife and mace close by. Meanwhile, she is collecting tickets for trespassing.

A struggle with drug addiction keeps Star on the streets. She has tried living in homeless shelters before, where she could get connected with resources to help her recover, but she has trouble acclimating to the culture. She has been homeless most of her life.

“Everytime I get into a house, I don’t know how it is, how it works,” she said. “I’ve got friends out here.”

Like Kiya, her friends serve as both social support and protection. One of them, an army veteran known as Sarge, says he protects his team because “that’s the army way.” Women who are homeless stick to camping in groups for that reason.

“They usually camp with us guys to stay safe,” he said. “We protect them. We’ve got to look out for each other, that’s the only way to do it.”

People living on the streets are constantly at risk of losing what little they own to theft or destruction. Sometimes those damages are caused by other homeless people; other times, it’s caused by civilians with contempt for homeless campers.

The first time Star had her tent destroyed by arson, it was done by workers following orders from their manager, she said.

Hutton hopes Roseburg could one day get a community lock box where people can safely store their belongings. Los Angeles has similar resources.

“We need an area that will allow tents, or a tiny home village at the least,” he said. “If Star could have a safe place to sleep and lock her stuff up, it would greatly reduce her stress and keep her from getting so many fines.”

"Struggling with drug addiction". They are not struggling, they are relaxing into drugged stupors. Everybody else who has to deal with the homeless thefts, garbage, needles on the ground loaded with diseases, and having to clean human dung off their shoes is struggling.