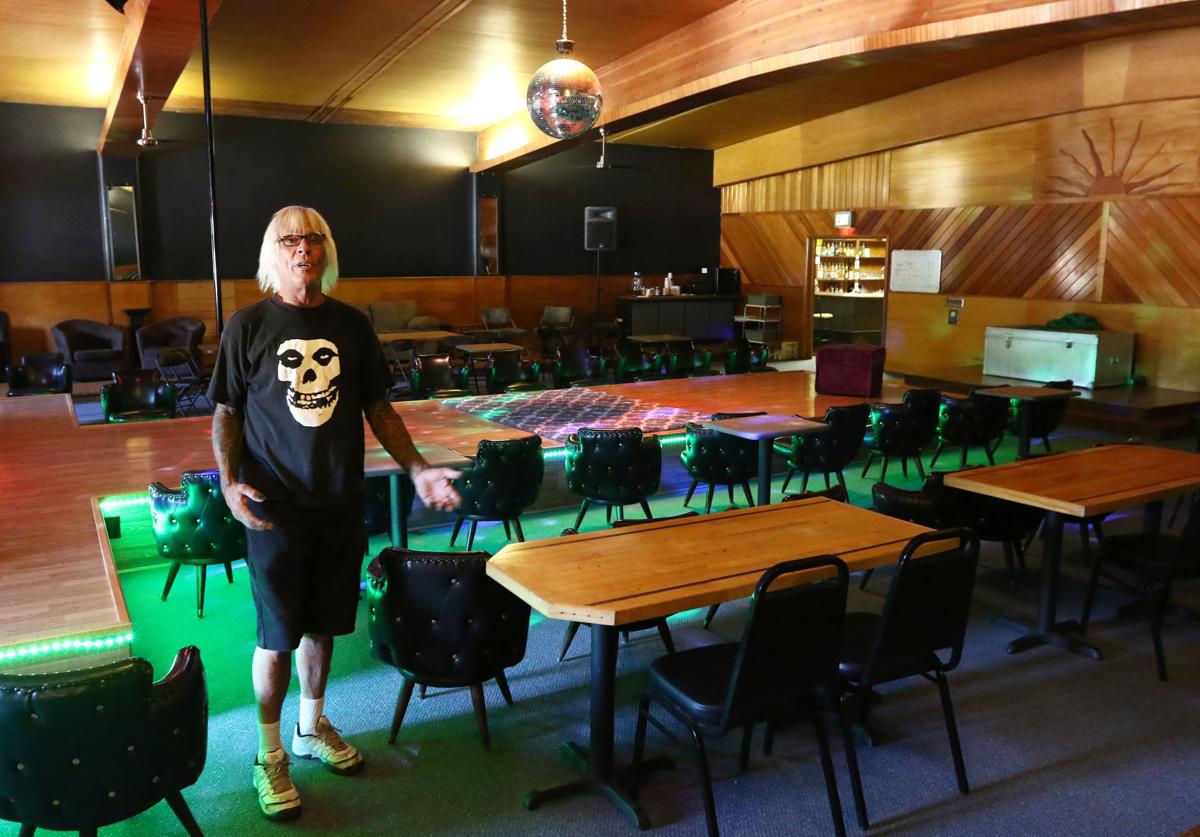 Rik Marin stands near the main stage in the Top of the Bowl nightclub above Family Fun Bowling in Drain on Tuesday. 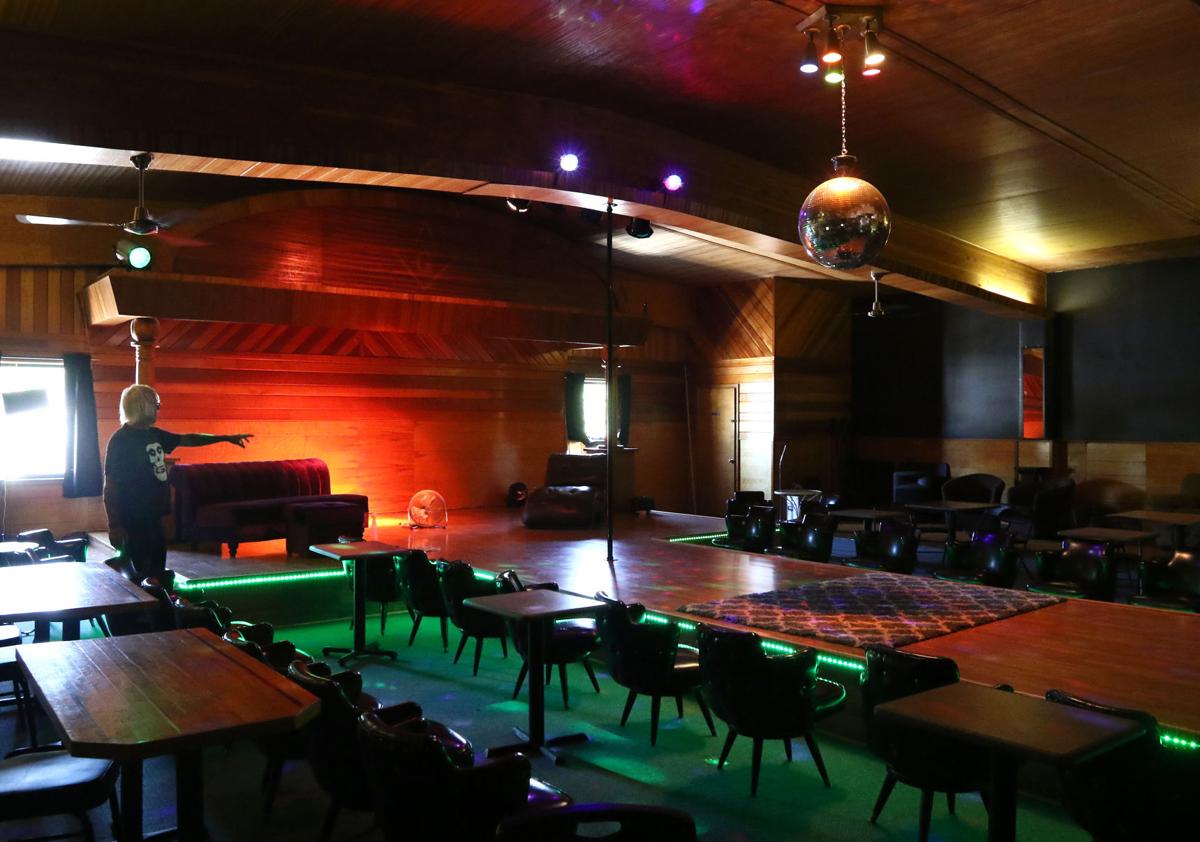 Rik Marin discusses the layout of the entertainment room in the Top of the Bowl nightclub above Family Fun Bowling in Drain on Tuesday. 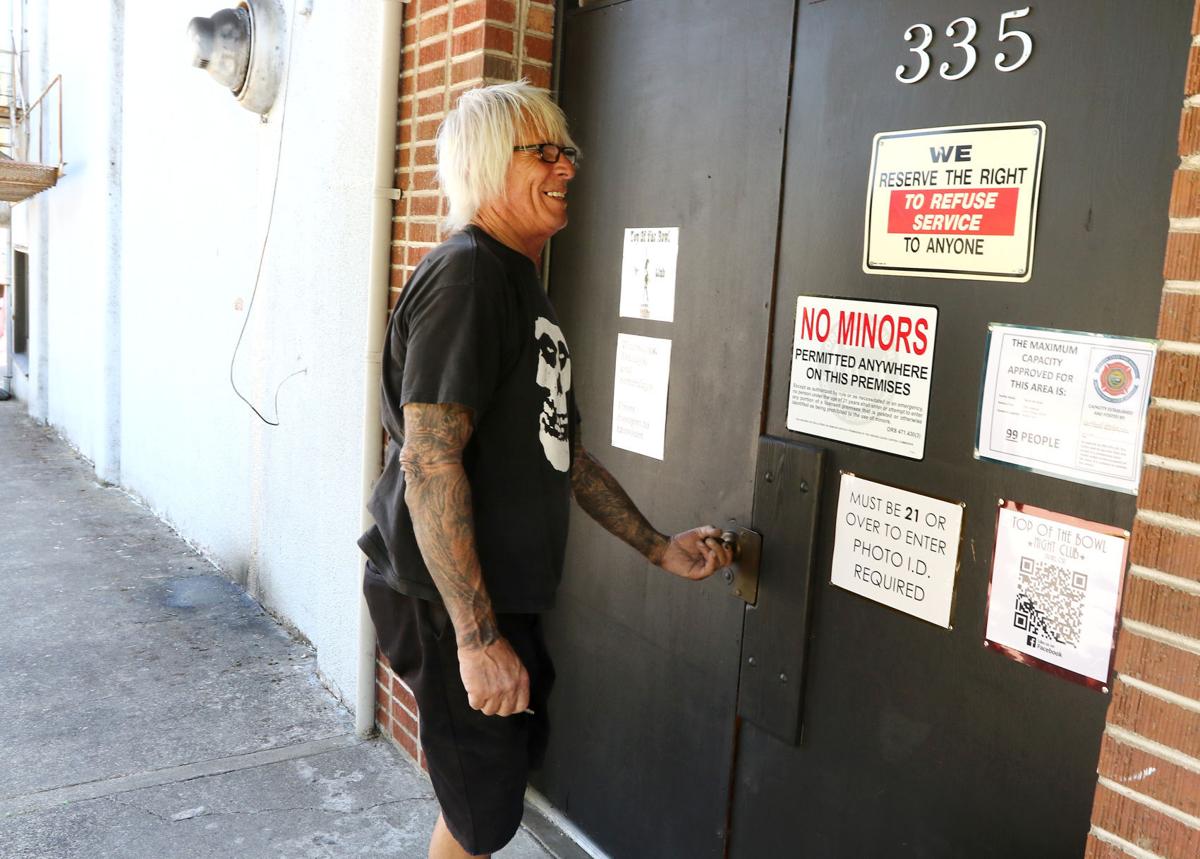 Rik Marin unlocks the door at the Top of the Bowl nightclub in Drain on Tuesday. 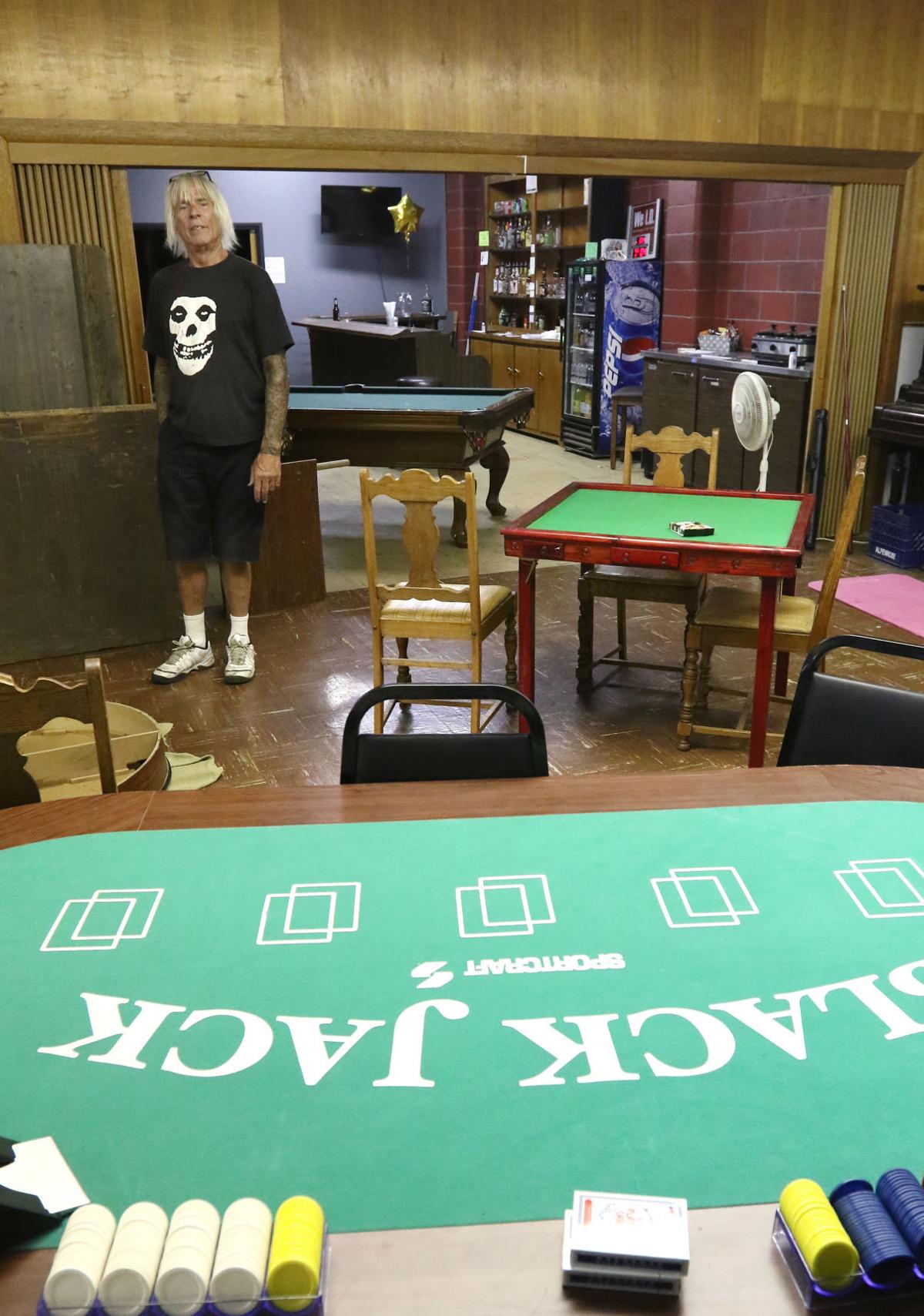 Rik Marin discusses a space in Top of the Bowl that will be used for gaming in Drain.

Rik Marin stands near the main stage in the Top of the Bowl nightclub above Family Fun Bowling in Drain on Tuesday.

Rik Marin discusses the layout of the entertainment room in the Top of the Bowl nightclub above Family Fun Bowling in Drain on Tuesday.

Rik Marin unlocks the door at the Top of the Bowl nightclub in Drain on Tuesday.

Rik Marin discusses a space in Top of the Bowl that will be used for gaming in Drain.

DRAIN — A lot’s changed in this tiny town — population 1,200 — since the Top of the Bowl bar featuring topless dancing girls opened up over the bowling alley last month.

Members of the church next door feel invaded. Some neighbors have complained of excessive late-night noise, others of declining morals. Some said they fear that criminal activity will increase in town because the club is there.

Town leaders are angry. A family’s been divided.

And the city for the first time, as of a special meeting of the Drain City Council on Saturday, has a law requiring businesses to obtain licenses.

The law also seeks to restrain bars offering adult entertainment. The dancers are required to wear at least pasties and thongs now, according to the law, and adult entertainment can’t take place within 500 feet of the places where children are likely to be, such as schools, parks, swimming pools, libraries — and most importantly for the fate of the Top of the Bowl — churches.

Top of the Bowl manager Rik Marin is defiant in the face of opposition.

Marin said he’s operating a legitimate business that features women dancing topless, not nude. He said he also hopes to bring in male dancers, entertainers in drag and live music. And topless dancing is protected as free speech under Oregon law, he said.

Marin’s girlfriend, Jamie Hennricks, owns the building. For many years her mother Darlene Hurd has operated the Family Fun Bowling alley and cafe on the first floor. The cafe offers the cheapest bacon burgers in town, Marin said.

But Marin said the bowling business isn’t what it used to be, and that’s not because of the topless bar upstairs.

Water and electricity for the building are $2,000 a month. And Hurd had a quadruple bypass a couple of months ago. Marin said they’d like to make enough money with the bar that she could retire to Cabo San Lucas, Mexico.

“I know she’d rather go down and lie on the beach every day rather than be here flipping hamburgers at the bowling alley,” Marin said.

The building is a former Masonic Lodge. The second floor hadn’t been used much in recent years, but measures 50-by-100 feet with a built-in stage. The women do their dancing on Thursday, Friday and Saturday evenings, and the customers come from towns all around to see them.

“As far as the lewdness, there’s nobody running around the streets naked,” Marin said. “It’s just like any other bar. When you walk inside, somebody walking by on the outside can’t see the inside.”

The second floor has three windows, 20 feet off the ground, and are covered with black curtains during the performances, he said.

“So if you can see in that window you have a special talent,” he said.

It’s left up to the dancers whether they want to take their tops off, and they all wear thongs on bottom.

But none of this is sitting well with the neighbors, some of whom pointed out that Marin also goes to the truck stop at Rice Hill and brings customers to the bar.

In a video taken at a Rice Hill truck stop and posted to Facebook, Marin can be heard asking the “girls” whether there’s enough people there to dance for while driving past truck after truck. “Cha-ching, cha-ching,” he added. The sound of money.

He also made some angry when he posted a photo labeled “nice booty sheriff” of the backside of a female law enforcement officer.

And then there was the stripper who told city councilors Saturday she dresses up as a little girl so that men could have their fantasy with her and not with real little girls.

City Councilor Jo Barker said when the stripper made her comment, “It was like you could hear everybody’s brain stop instantly and think to itself did she really say that? And then you hear this gasp.”

Marin said the bar is grandfathered in because it was already operating before the law was passed. Barker said that’s not true.

The two sides are lawyered up, so the Top of the Bowl’s fate may ultimately rest with the courts.

Barker said Marin lied to the council about what type of business it would be operating. She said the business was supposed to have burlesque and can-can style entertainment, not nude dancing.

“What they’re doing right now is pandering obscenity and public nudity,” she said.

As for the coverings the dancers have on their bottom half, “let’s put it this way, it’s basically a knee Band-aid with a string running up the crack,” Barker said.

She based her ordinance on ordinances in North Bend and Beaverton, along with some boilerplate language from the League of Oregon Cities.

“We took a major step in the eyes of the community, and that’s a positive step. They came to us yelling, angry and we took the bull by the horns,” she said.

Among the leaders in the fight against Top of the Bowl is Myndee Ferrill, who is Hurd’s niece. She said she was led to believe the bar was going to have a mix of entertainment, from burlesque dancing to Elvis impersonation to live music.

When she discovered what the entertainment really was, her concern was the two high flow traffic areas for children nearby. One is the bowling alley below and the other is the Gateway Family Fellowship Church of the Nazarene next door.

Ferrill said she’s not saying no to strip clubs in all of Drain. She just wants to move it to a more appropriate location.

“Just like an industrial area should be far enough away from residents that it doesn’t affect their health, we feel the same way about strip clubs not affecting the children’s mental health,” Ferrill said.

She doesn’t want her family to be hurt, so it’s hard for her to fight the bar. But she said she wishes “they’d make better choices.”

“Just because they’re my family doesn’t mean I can step aside,” she said.

Barbara Evans has lived in Drain for 47 years. She used to be a member of the Rainbow Girls that met in the building when it was a Masonic Lodge and is a longtime member of the women’s bowling league.

“There’s very few that want to go back because of what’s going on. It’s more of a principle than anything,” she said.

His church is so close that he said the bar’s customers have been using his parking lot without permission. He said the church has a youth group, a playground that’s right next to the bowling alley, a food program and Alcoholics Anonymous meetings.

None of that, he said, belongs next to a strip club.

“We’re just praying for them and praying that God’s will be done in this whole situation, that he’ll send his protection on us. A strip club is not good for the community, it’s not good for the neighbors,” Perry said.

Marin said his business is good for the town. It appeals to the 21 to 40 year old crowd and it brings out-of-town customers to the other businesses in Drain, he said. Saturday night, he said, he had to turn customers away from the bar because there were too many to fit with COVID-19 social distancing rules.

He said the City Council had no problem with the business until a small group of churchgoers got upset.

“It’s just small-town life, and they’re just going to have to get used to it because we’re going to fight all the way through. We’re not going to give in,” he said.