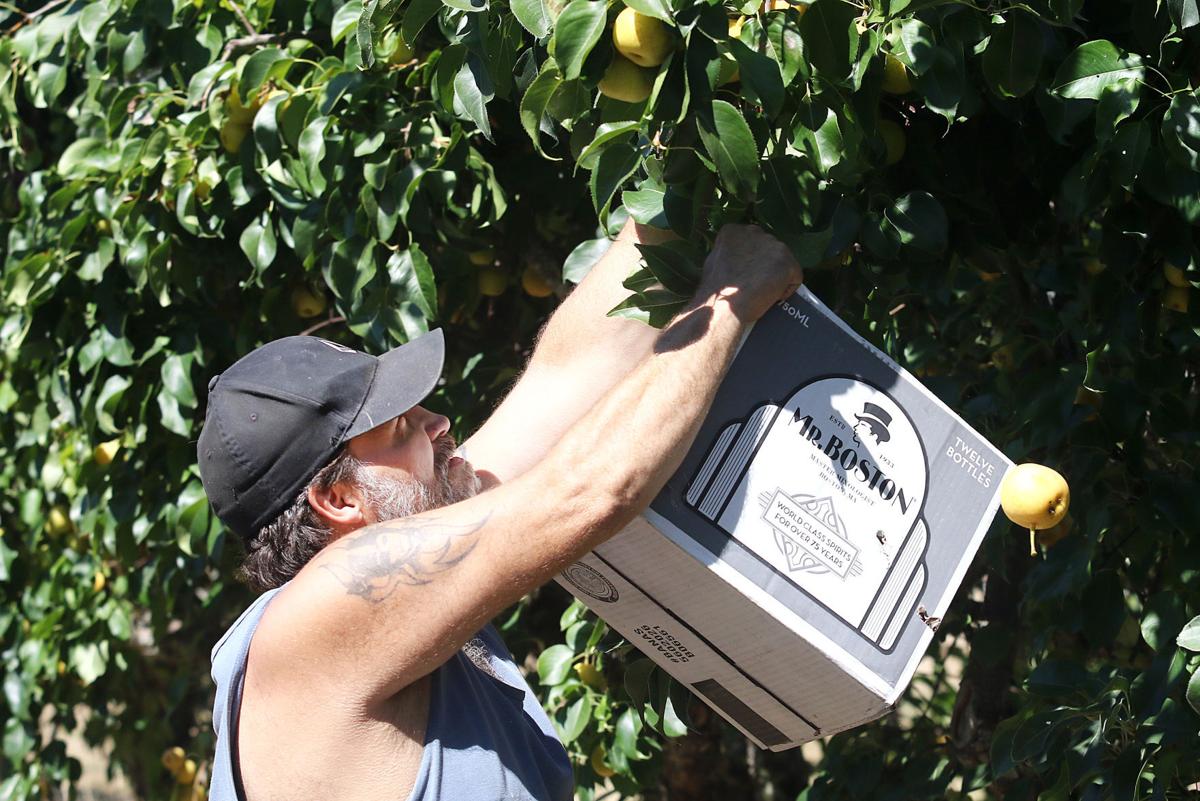 Jody Martin, of Sutherlin, gleans Asian pears at an orchard in Roseburg on Wednesday. 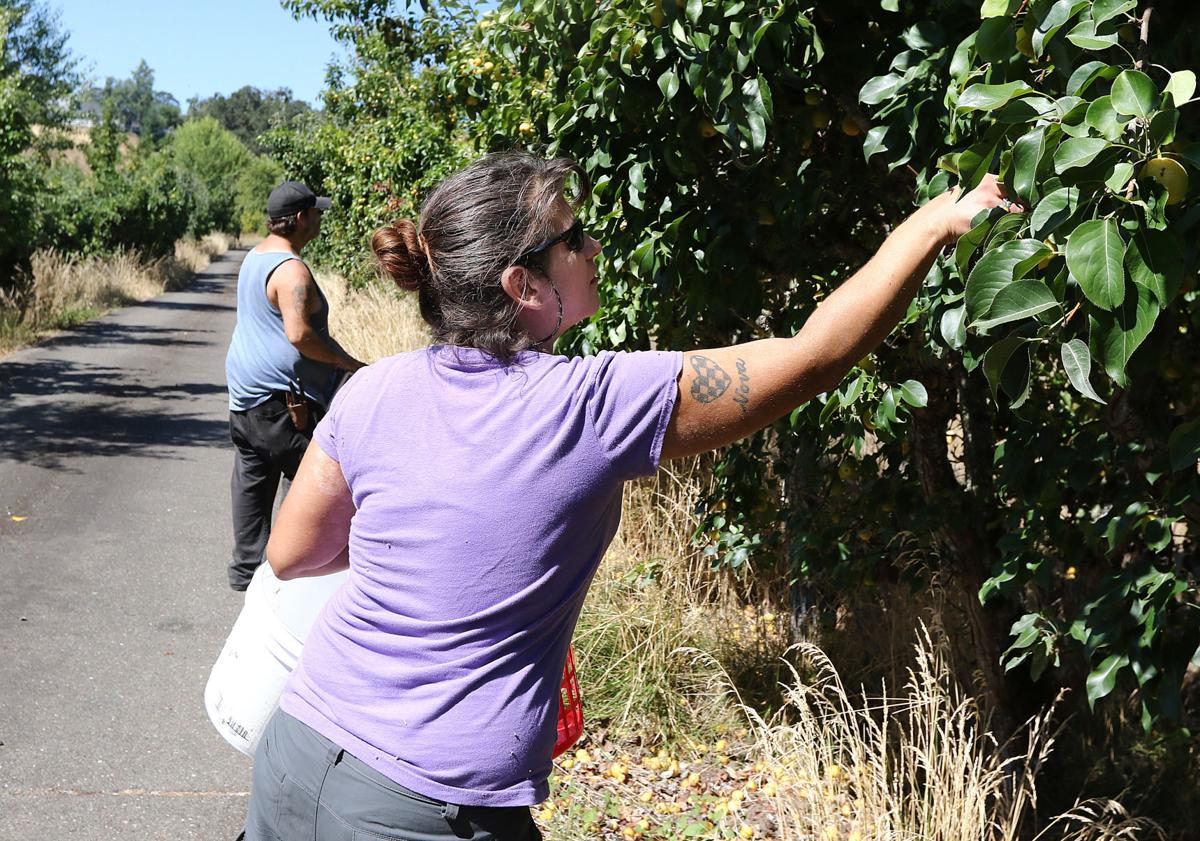 Corissa Reynaga, front, and Jody Martin, both of Sutherlin, seek out Asian pears at an orchard in Roseburg on Wednesday. 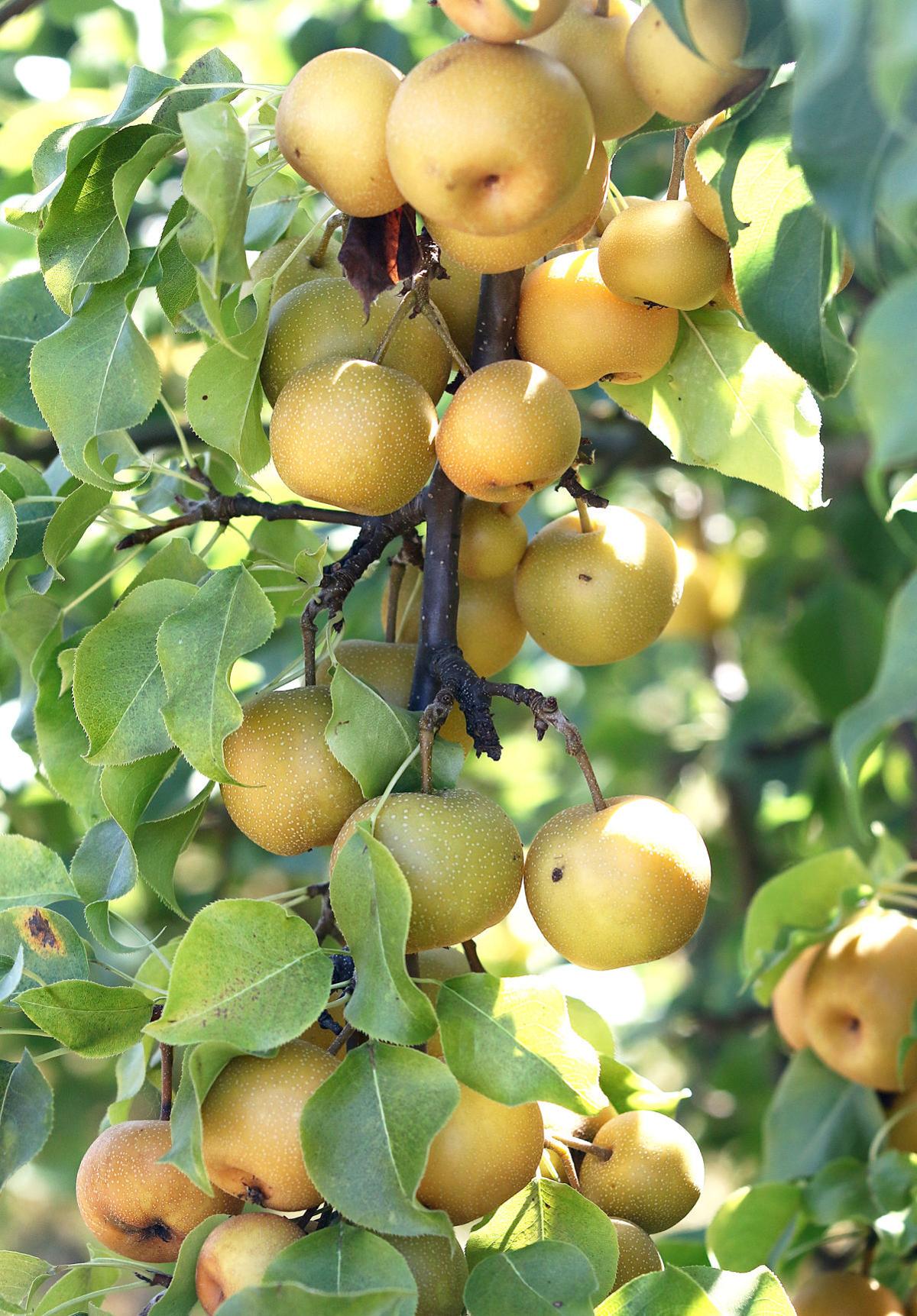 Asian pears grow in an orchard in Roseburg on Wednesday. 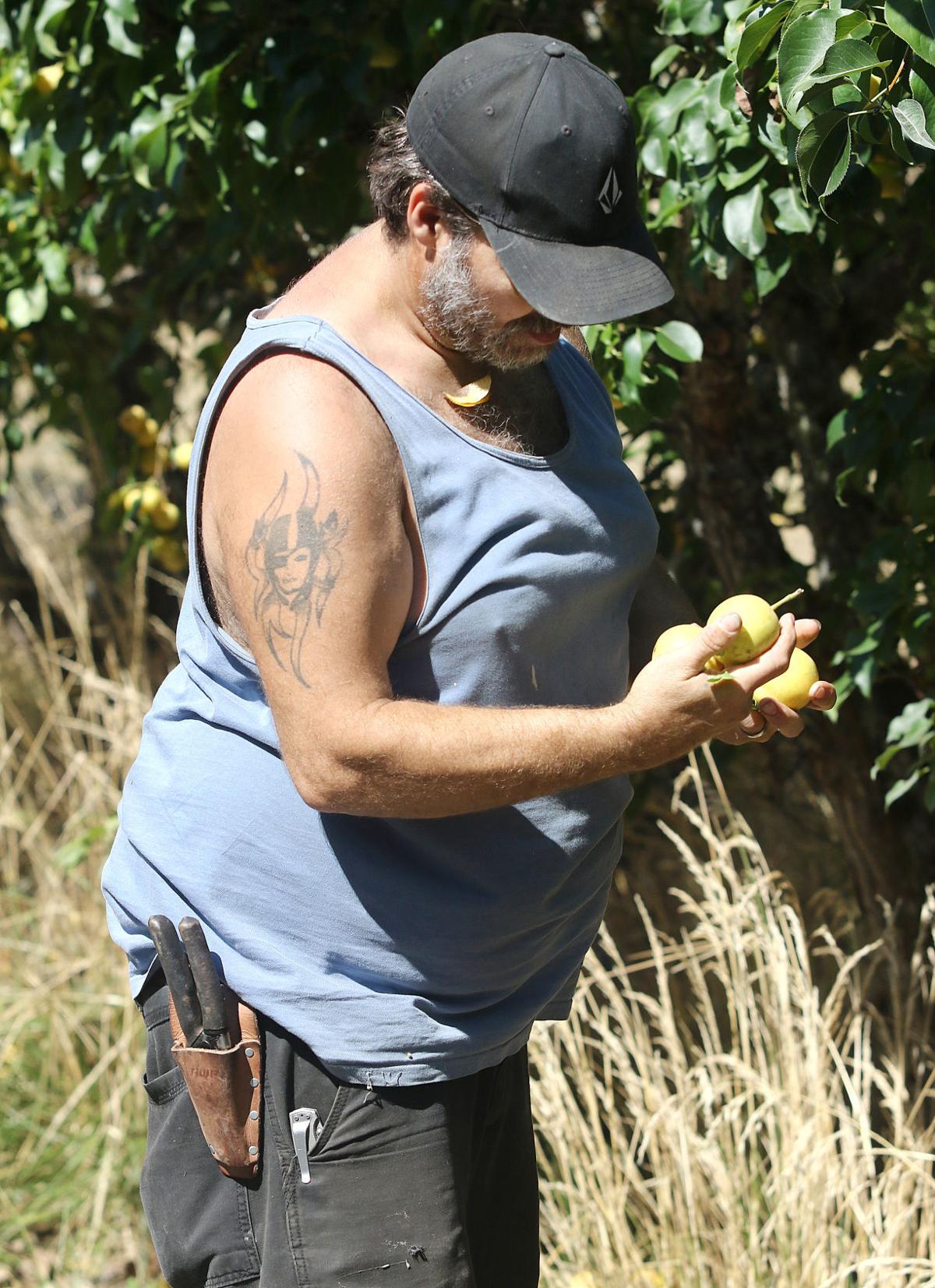 Jody Martin selects ripe Asian pears at an orchard in Roseburg on Wednesday. 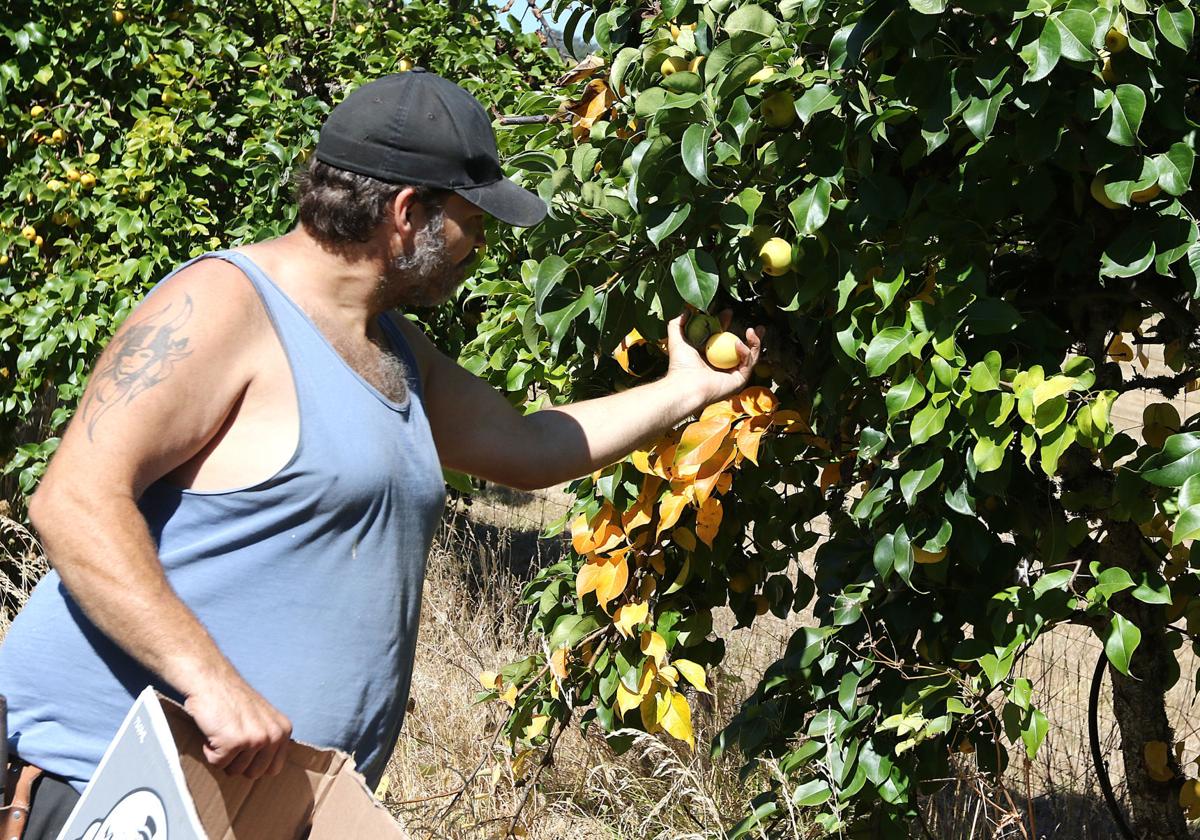 Jody Martin of Sutherlin gleans Asian pears at an orchard in Roseburg on Wednesday.

Jody Martin, of Sutherlin, gleans Asian pears at an orchard in Roseburg on Wednesday.

Corissa Reynaga, front, and Jody Martin, both of Sutherlin, seek out Asian pears at an orchard in Roseburg on Wednesday.

Asian pears grow in an orchard in Roseburg on Wednesday.

Jody Martin selects ripe Asian pears at an orchard in Roseburg on Wednesday.

Jody Martin of Sutherlin gleans Asian pears at an orchard in Roseburg on Wednesday.

Ryan Poe’s parents were people known for their giving.

So after his mother Janice Poe died in July, Ryan Poe thought what better way to honor his mother and father than to give away the pears from the family’s orchard in Roseburg.

On Wednesday, about 12 volunteers from the Community Gleaners turned out to pick the pears.

Asian pears are known as salad pears, thanks to their crisp texture, Poe said. They can be stored for months, so long as they’re harvested gently and stored in a cooler.

Janice and Randy Poe brought their four kids to the farm and planted the pears in the 1980s.

Prior to that, they had run a sheep ranch in Glide.

But the Poes wanted to produce food, and Randy Poe had heard Asian pears would grow well in the area.

Randy Poe was a Navy veteran who served during Vietnam and a Roseburg dentist.

Janice Poe was a former runner-up for Miss Tennessee with an amazing voice who came from a family of singers.

“She was the kindest woman I’ve ever met, just always accepting everyone,” he said.

The couple used to travel frequently to places like India, Peru and Central America to offer dental care to people who had no access to dentists.

After they began raising pears, they liked to donate a pallet at harvest time to the Roseburg Rescue Mission.

“They always had a mind for helping others and caring for others who were less fortunate,” Ryan Poe said.

“That’s why this is really nice to do because the family is about giving back. If they’re not being used, then someone can use them,” he said.

If his parents were looking down today, he said, “I think they’d be smiling.”

Poe was also inspired by a quote about giving that appears with slight variations and is attributed to several different people online. The version saved on Poe’s phone says, “When you have more than you need, build a bigger table — not a higher fence.”

The Community Gleaners share that mission of building a bigger table.

Craig Reed, co-coordinator for the Community Gleaners, said the group collects fruits like blueberries, apples, plums and pears as well as vegetables like potatoes and carrots.

It’s produce grown at large farms and on backyard fruit trees. Wherever there’s surplus fruit to be had in central Douglas County, the gleaners will go pick it.

“The gleaners, the people who show up, can keep half of what they harvest and the other half is donated,” he said.

The food they donate goes to nonprofits like the Roseburg Rescue Mission, Roseburg Senior Center, Meals on Wheels, a women’s shelter and local churches.

One year, Reed said he left a box of produce at Eagle Park on a Saturday when the homeless were being fed there. Another time he brought tomatoes to wildfire fighters at the fire camp in Glide.

“It’s just our way of sharing with the community,” he said.

It’s also enjoyable. The gleaners usually go out in the morning and pick before the weather gets hot, he said.

“It’s just a calm, peaceful feeling to be out in agriculture where things are growing and to be able to harvest,” he said.

“This morning I probably ate three Asian pears as I was picking, and there’s nothing better than eating right off the tree or the bush,” he said.

She said the group has a list of about 50 volunteers.

Mason has been certified in the past as a master preserver with the Oregon State University Extension Service but didn’t re-up her certification this year.

She said it was her husband Carl Mason who got into gleaning.

“He loved to pick. He used to bring literally pickup loads of food to can, freeze, preserve in whatever manner and I finally got to the point where I said, wait, let’s back off. We can share this with people,” she said.

And that’s what gleaning is all about.

“The philosophy is we have a lot, other people don’t have so much. So for people who need food, we have connected with the nonprofits in the area that have a way of giving food out,” she said.

Great story! I remember the Poes at our church and am so happy to hear their kids are giving back. Keep up the good work!

Thank you for this uplifting article. As a friend of the Poes, I can say for certain that Mr. and Mrs. Poe are indeed smiling down upon their orchard. Thank you, Ryan, for cherishing the pears.

Very nice story. We had a gleaners group in my old home area so it is nice to know this resource is in Douglas County too. I have a lot more fruit of all kinds than my neighbors and I can pick and eat. Great job!