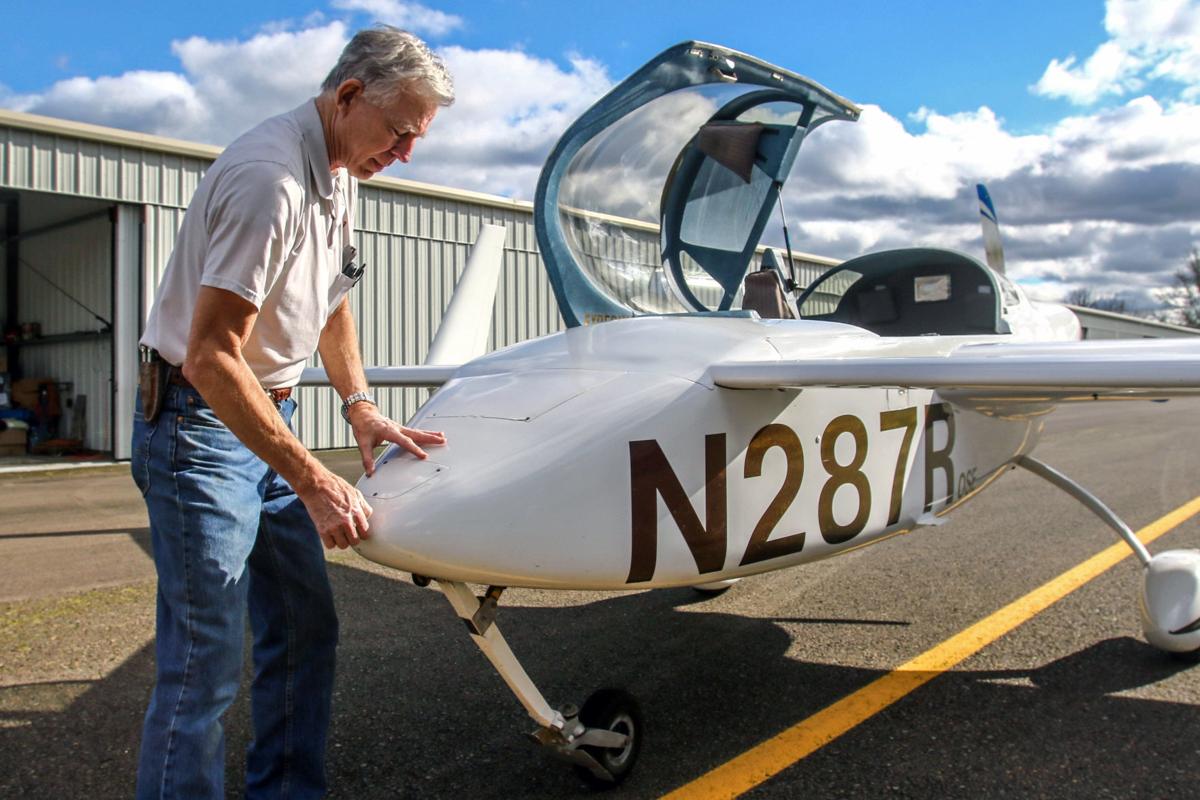 Dennis Rose shows how the nose wheel of his Cozy Mark IV homebuilt plane can retract when needed outside his hanger at the Roseburg Regional Airport. 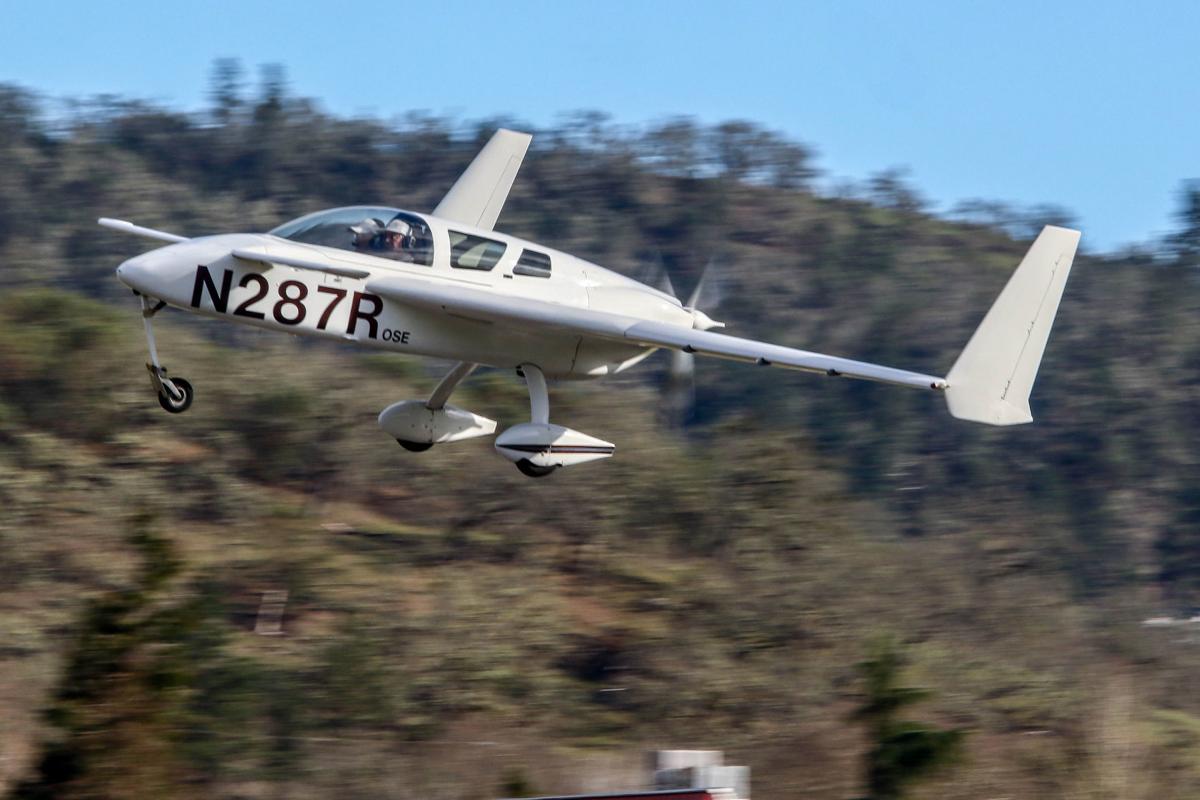 Dennis Rose and a passenger fly above the Roseburg Regional Airport in Rose’s Cozy Mark IV, a homebuilt craft with a distinct look. 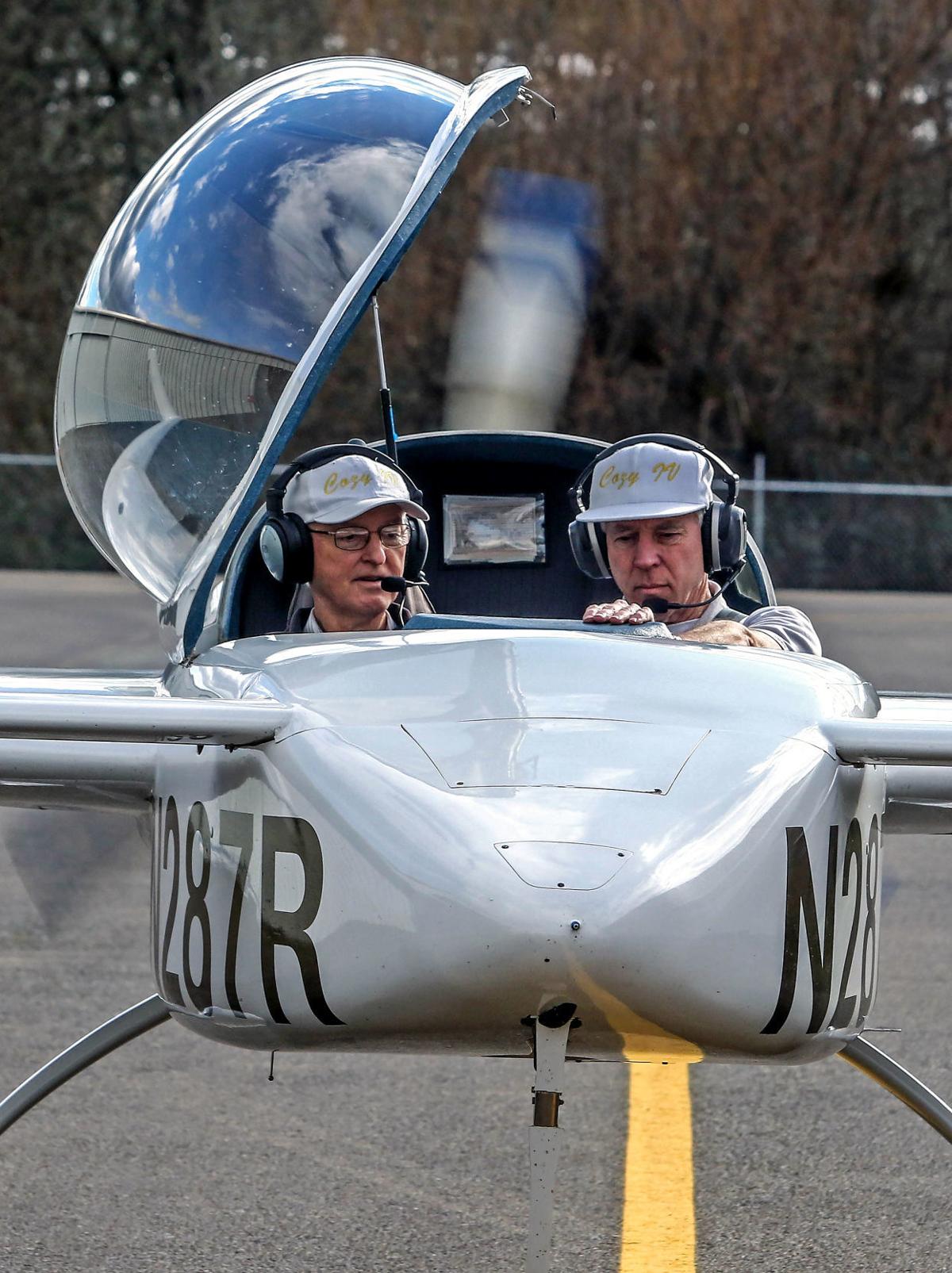 The Cozy Mark 4 airplane provides tight quarters for up to two passengers up front and two in the back. 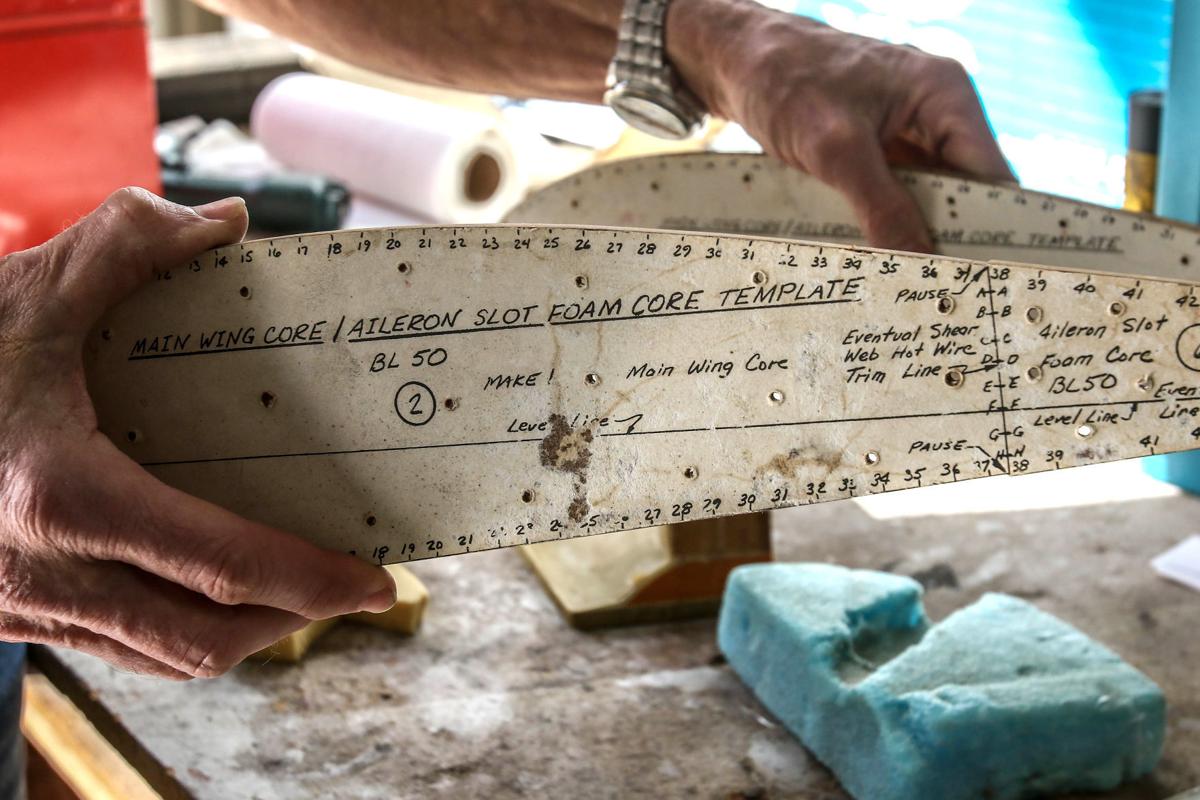 A sample of the patterns used to build a Cozy Mark IV airplane.

Dennis Rose shows how the nose wheel of his Cozy Mark IV homebuilt plane can retract when needed outside his hanger at the Roseburg Regional Airport.

Dennis Rose and a passenger fly above the Roseburg Regional Airport in Rose’s Cozy Mark IV, a homebuilt craft with a distinct look.

The Cozy Mark 4 airplane provides tight quarters for up to two passengers up front and two in the back.

A sample of the patterns used to build a Cozy Mark IV airplane.

One look at Dennis Rose’s unconventional aircraft at the Roseburg Regional Airport and it’s easy to see why it attracts attention when he takes it flying.

It certainly doesn’t look like a typical aircraft. The Cozy Mark IV 4-seater, designed by Burt Rutan, has the propeller in the back, the main wings are behind the cabin, canards are in the front of the cabin — those are small wing-like projections attached to the aircraft forward of the main wing — and a clear fiberglass cover over the cabin, that gives the pilot and passengers a good view of the landscape below. Only the nose landing gear retracts, but back wheels are fixed.

“It catches everybody’s eye, that’s for sure,” Rose said. “It’s fairly easy to fly, it’s a fast airplane and it lands fast. It’s a very efficient cross country airplane, so you can see the country. The Cozy is basically the cheapest, most efficient, four-seat airplane that you can build.”

The plane can reach speeds of more than 200 mph and has a range of about 1,000 miles. The Cozy’s forward canards provide two lifting surfaces and offer extra stability and control. Rose said that reduces drag and enhances the performance.

“The wings are behind the center of balance and the canards are in front of the balance,” Rose said. “It’s a safety feature that can bring you quickly out of a stall.”

The airfoils, he said, will stall long before the wings, so it causes the nose to drop. That causes it to instantly pick up speed and the canards start flying again, so all the time the wings are still flying.

“Because the wings are still flying, it’s almost impossible to enter a spin,” Rose said.

The plane requires a longer, pavement airstrip because of the higher speed it needs to get off the ground. The rear push propeller makes the aircraft unsuitable for unimproved landing surfaces.

From the time Rose purchased the plans for the Cozy, the project took 10 years to complete.

“I started in 1995 and completed it in 2005,” he said. “I built this as I had money, so when we didn’t have money, we didn’t build, so as I looked back on my record there were at least three or four years where I basically didn’t do anything on it. You cut out the pieces and if you have enough parts, you got a plane.”

Rose started flying at age 15 after his mother, father and older brother got their pilots’ licenses. He soloed on his 16th birthday and had his license by his 17th birthday.

“We were known as ‘The Flying Roses’ and we had a World War II instructor who taught us how to fly safely, not necessarily how to follow regulations,” Rose said.

But when Rose went to college, the cost of flying took a back seat to the education, so he didn’t fly again for almost 20 years. He then went to an air show and saw the strange looking plane that he decided he wanted. So in 1985, he had saved enough money to get an airplane kit, which he completed in 1988. He flew that for about 10 years.

“My wife got tired of me going through her purse taking things out before we took off to keep the weight down, and my son was becoming a teenager, so we decided to build a larger airplane and both of my kids helped me,” Rose said.

The Cozy which is aptly named is not a kit. Rose had to purchase materials to go with the plans and make the parts himself.

The Cozy was not made any wider than it needed to be and passengers have to have some flexibility to get in, but once they are seated it’s a comfortable ride. Rose said he likes to take his wife along on cross country trips.

“She enjoys it, as long as she doesn’t have to fly it,” he said.

Ashley Hicks speaking out: Right or not?

Doesn't sound cozy to me.