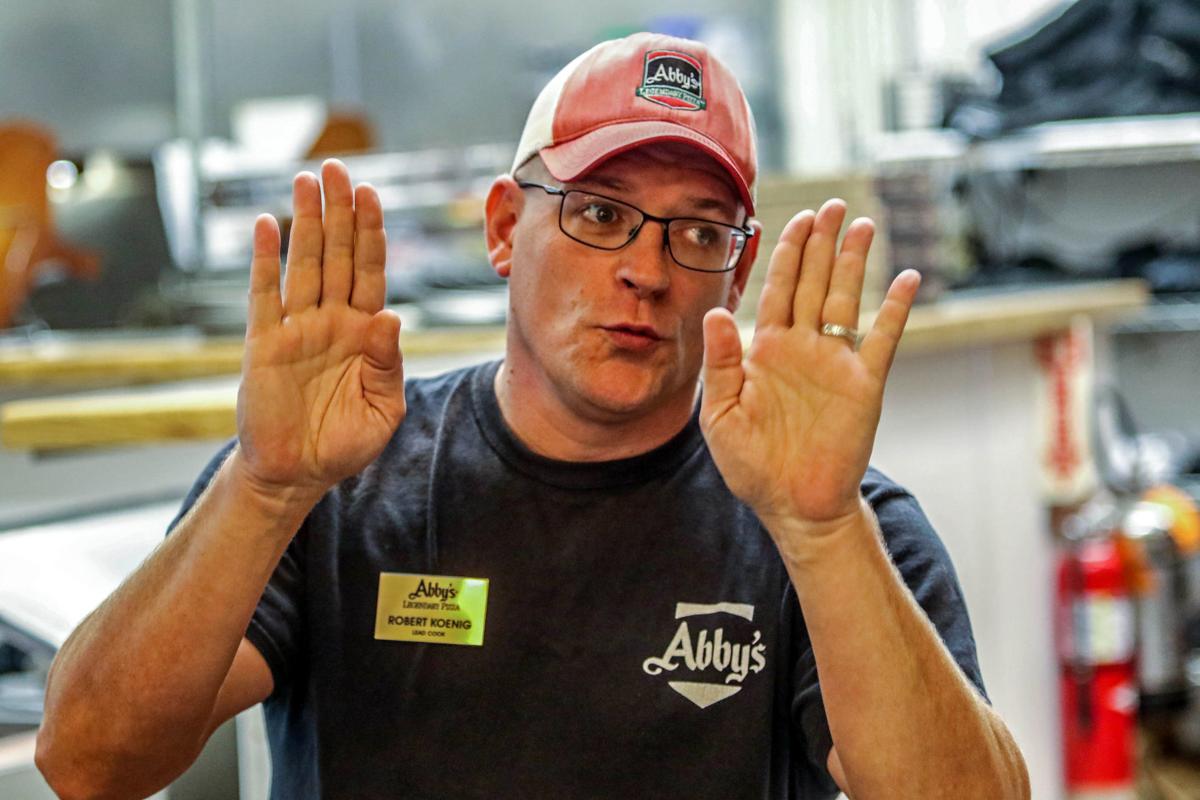 Robert Koenig, lead cook at Abby’s Legendary Pizza on Northeast Stephens Street, signs a response to a question. Koenig, who is deaf and legally blind, struggled to find employment for years until Abby’s hired him 1 1/2 years ago. 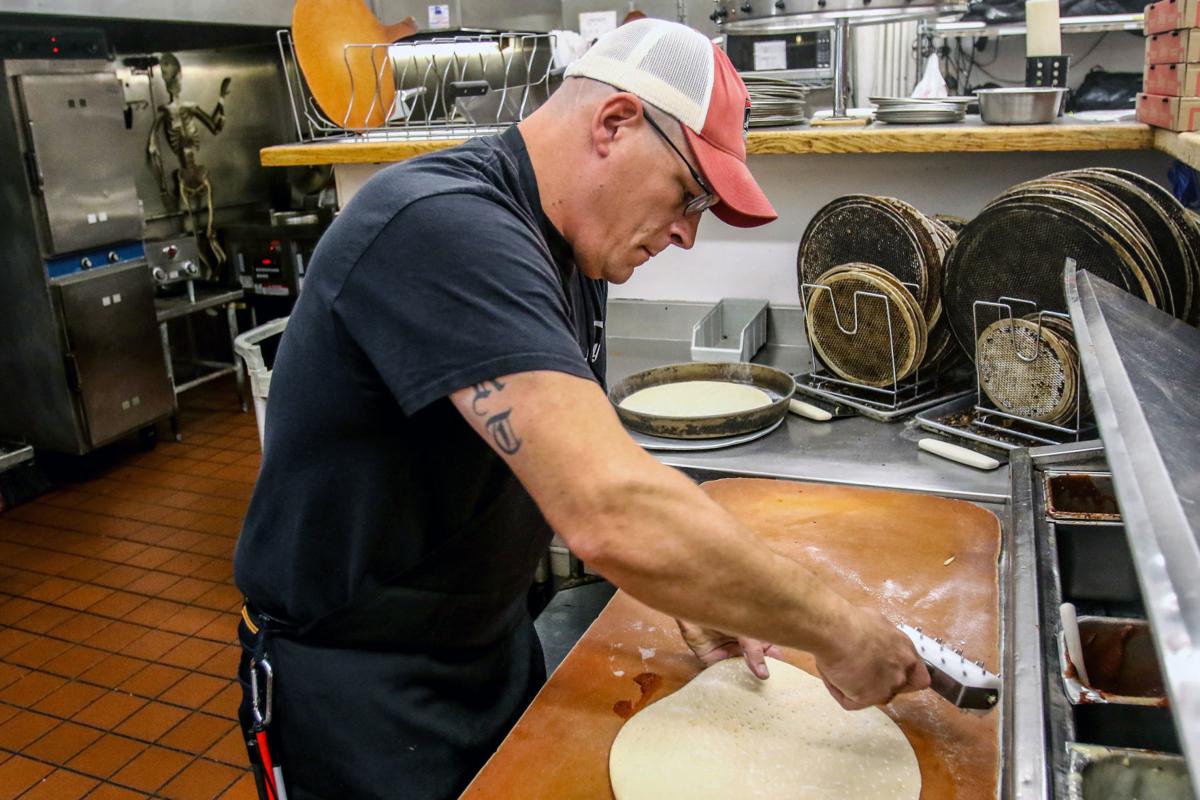 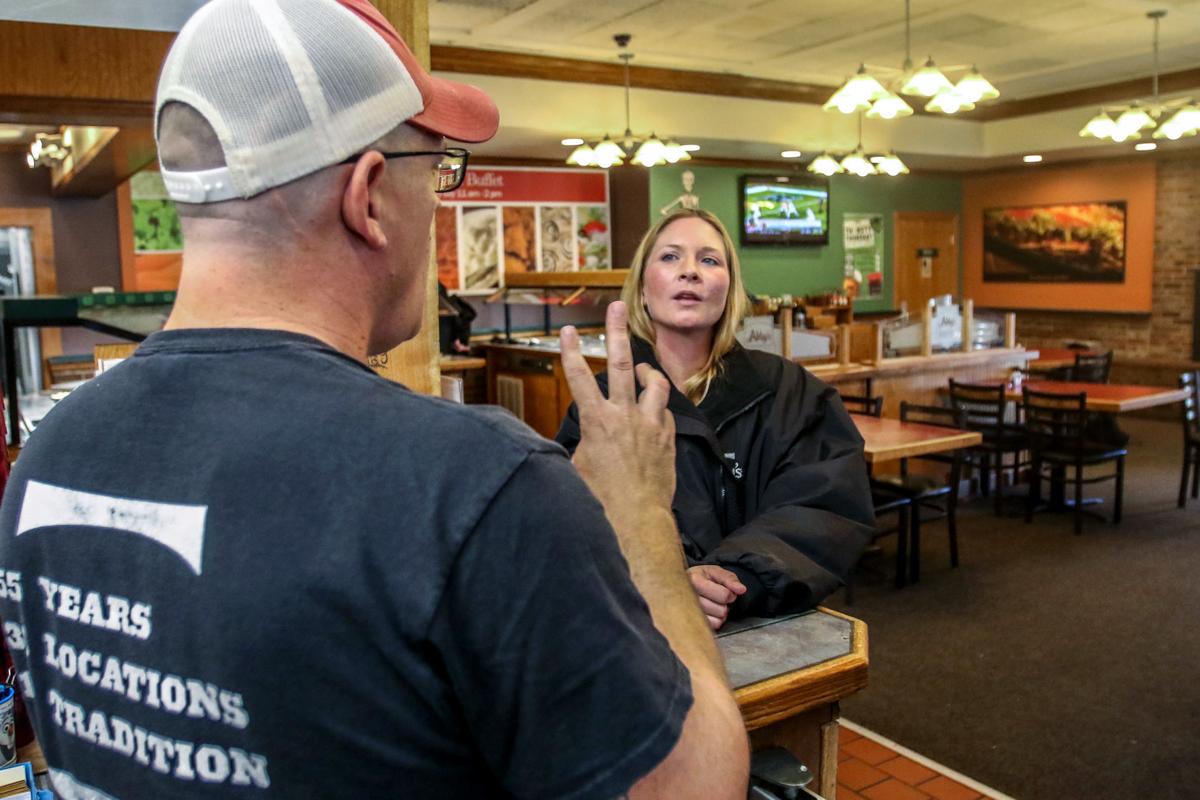 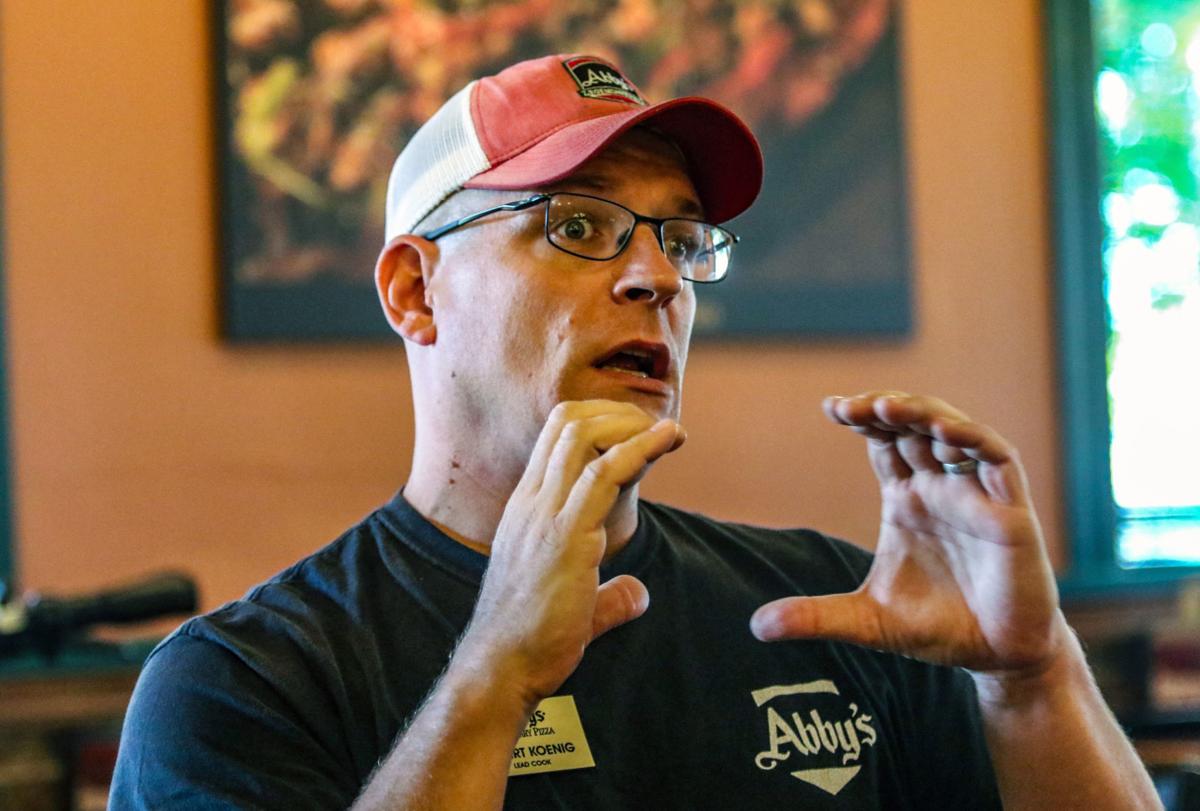 Robert Koenig, lead cook at Abby’s Legendary Pizza on Northeast Stephens Street, signs a response to a question through an interpreter Monday. Koenig, who is deaf and legally blind, struggled to find employment until Abby’s hired him 1 1/2 years ago. 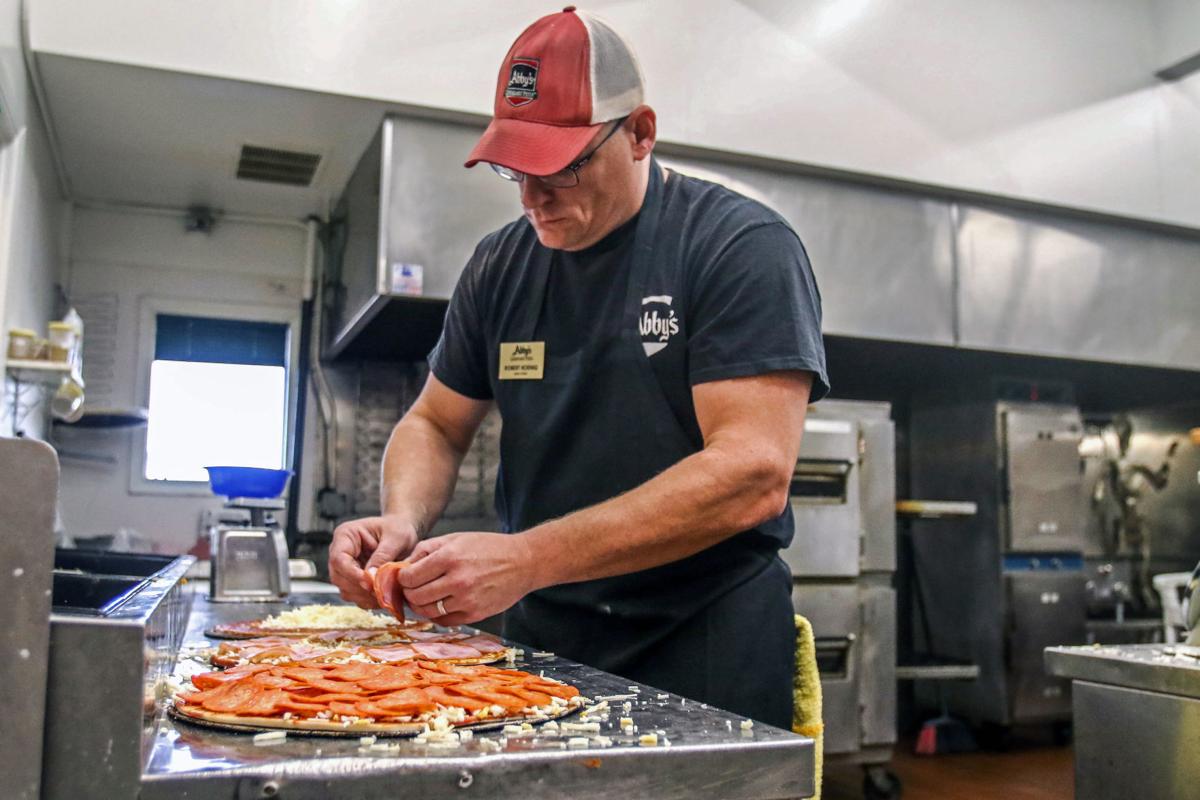 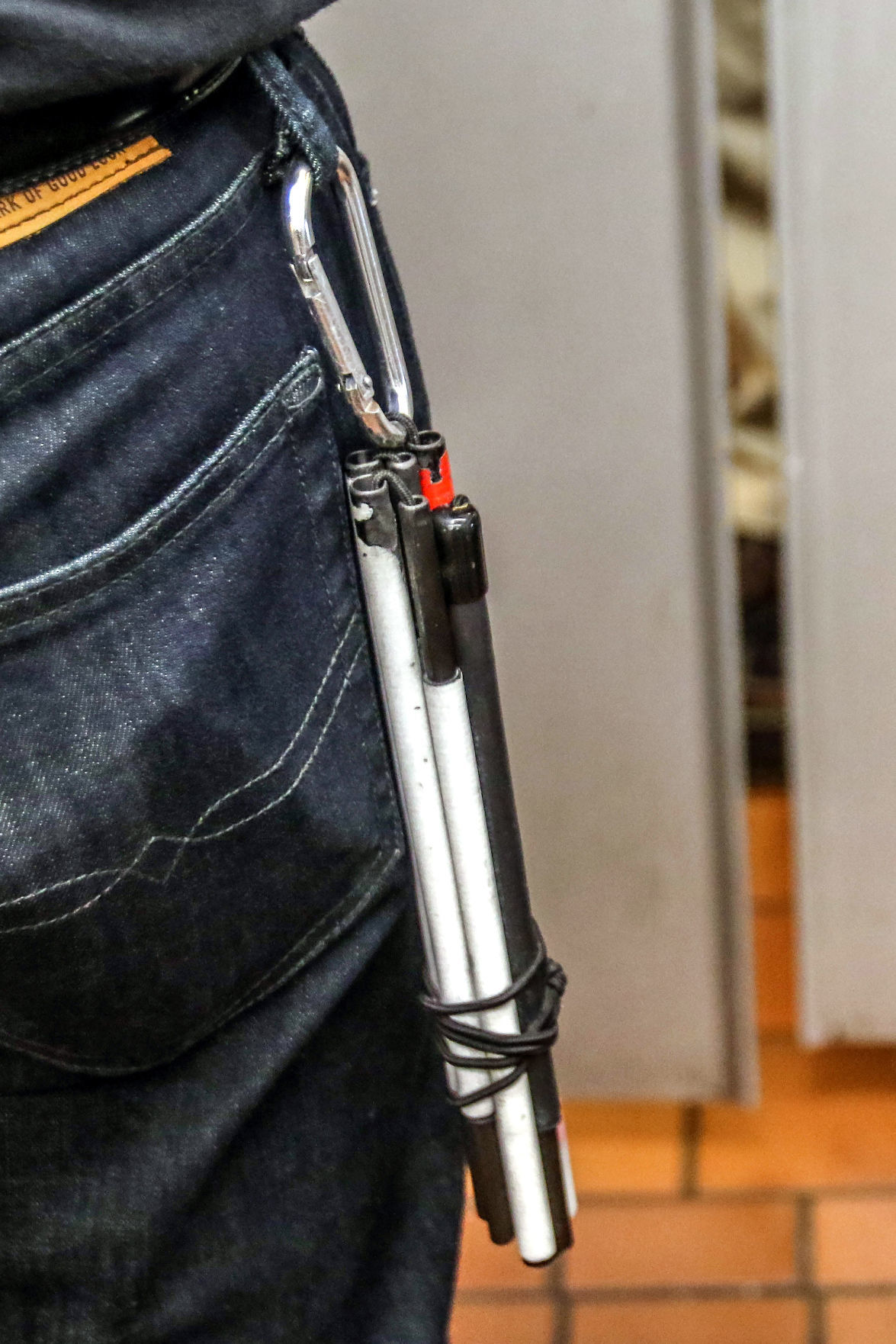 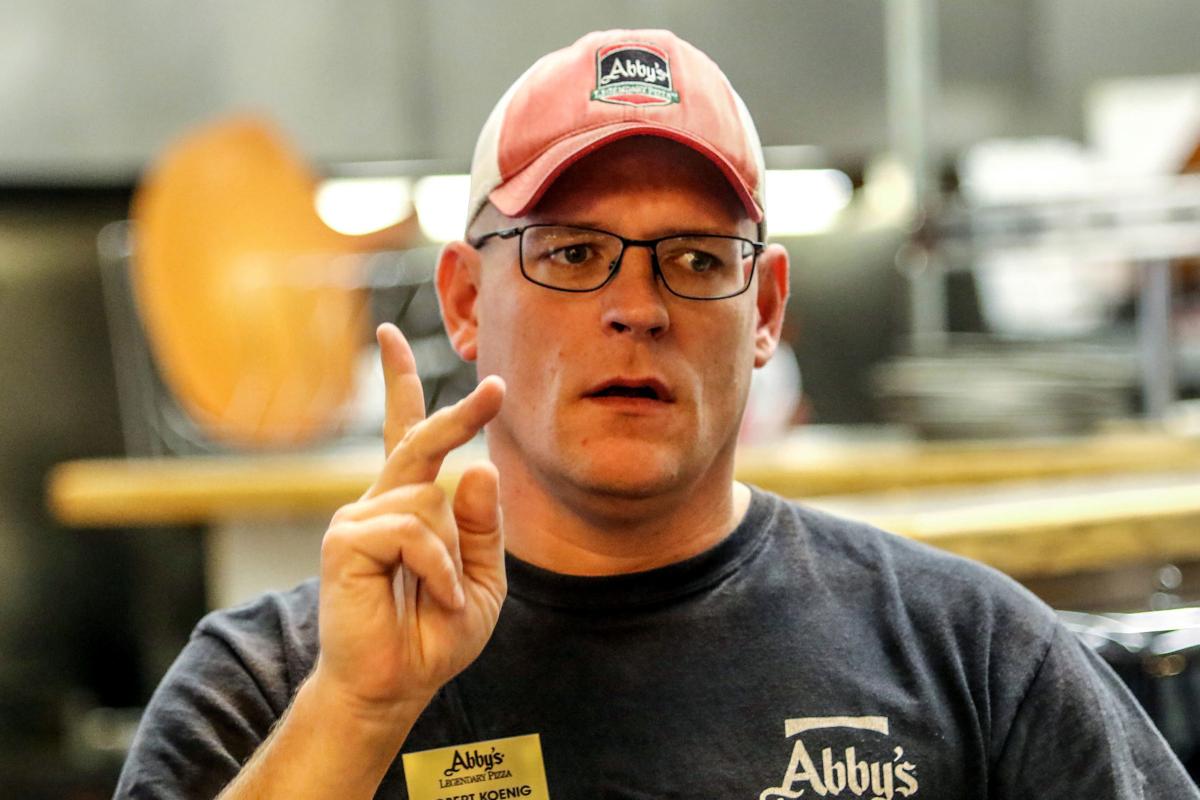 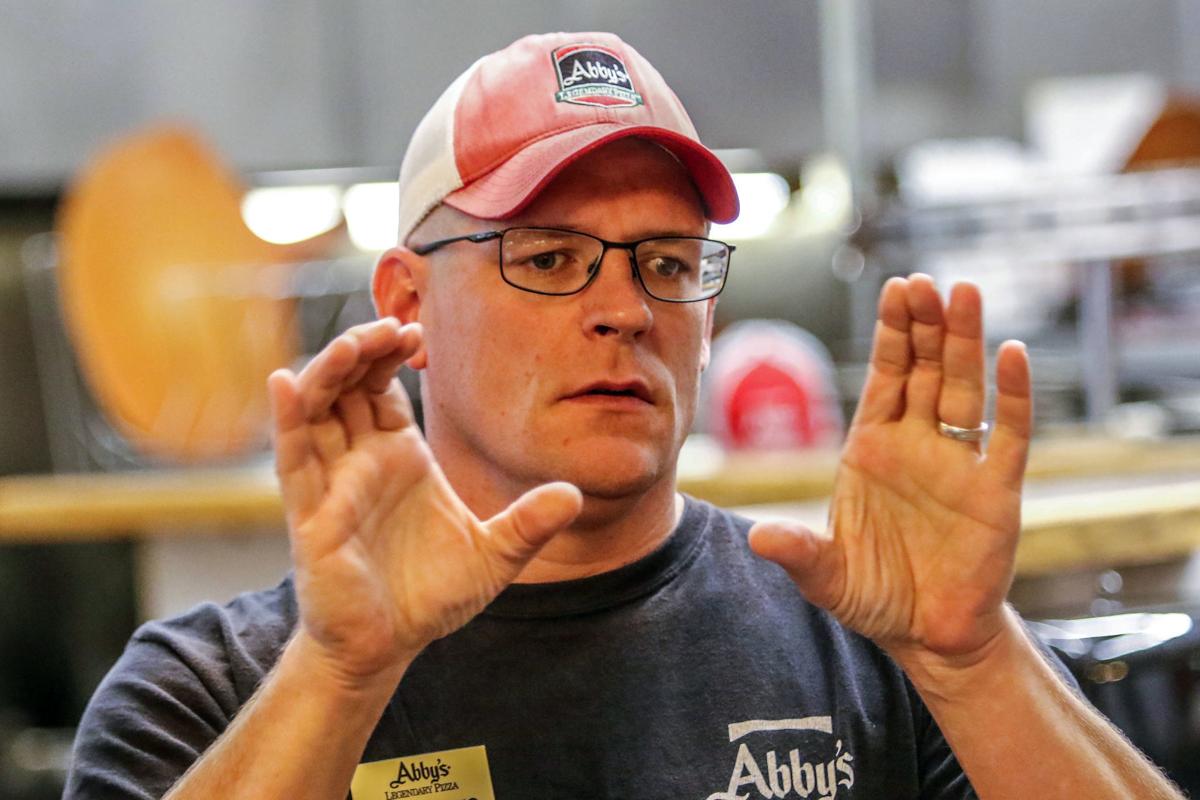 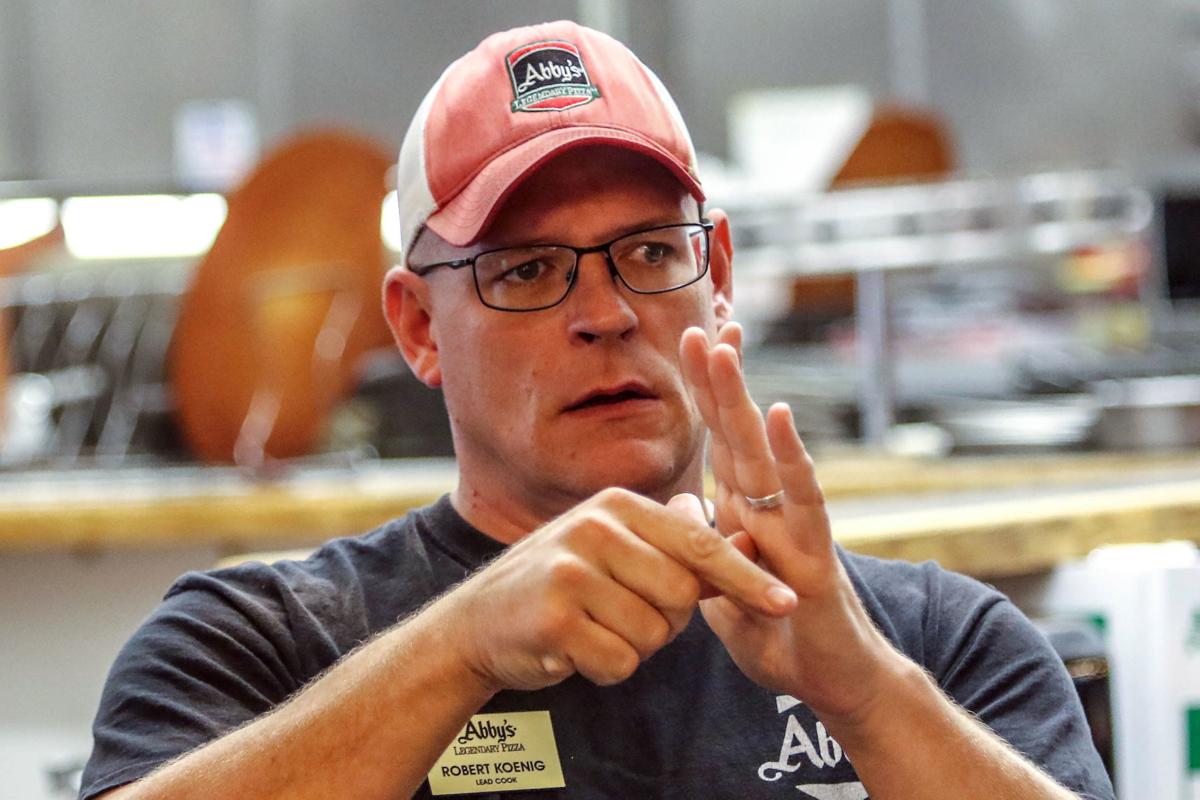 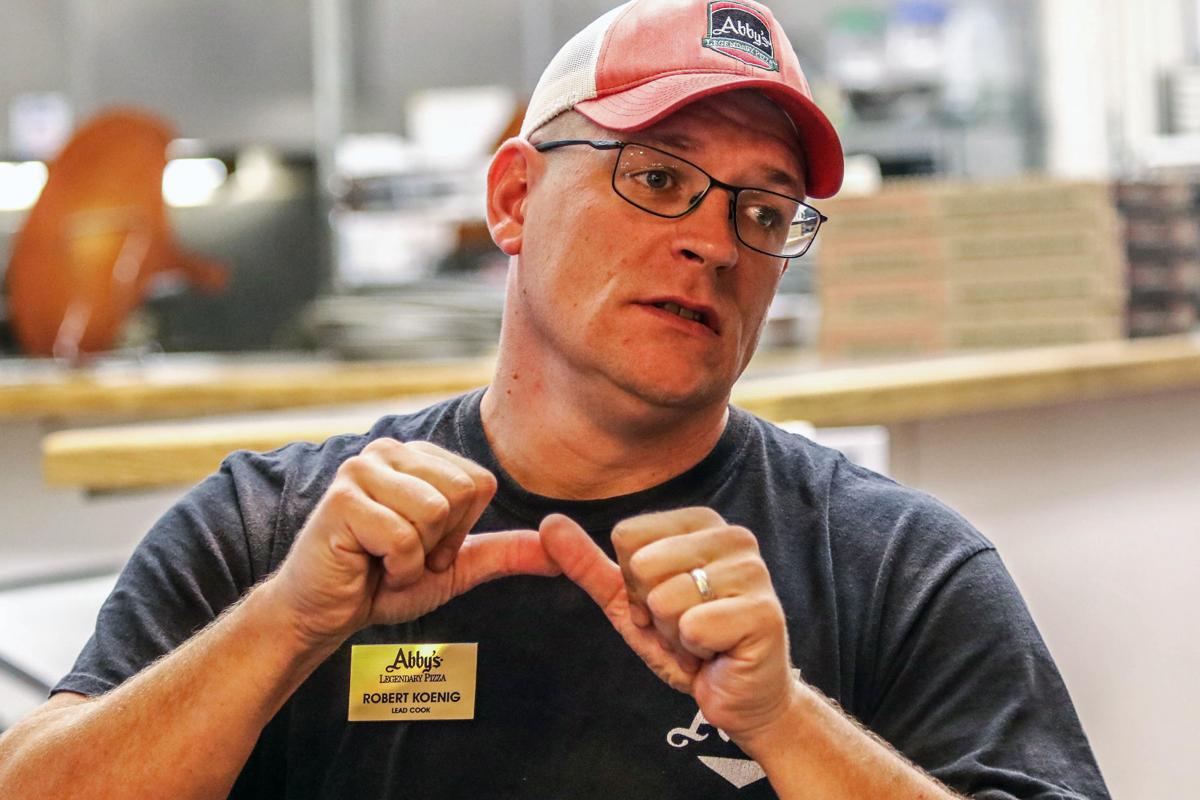 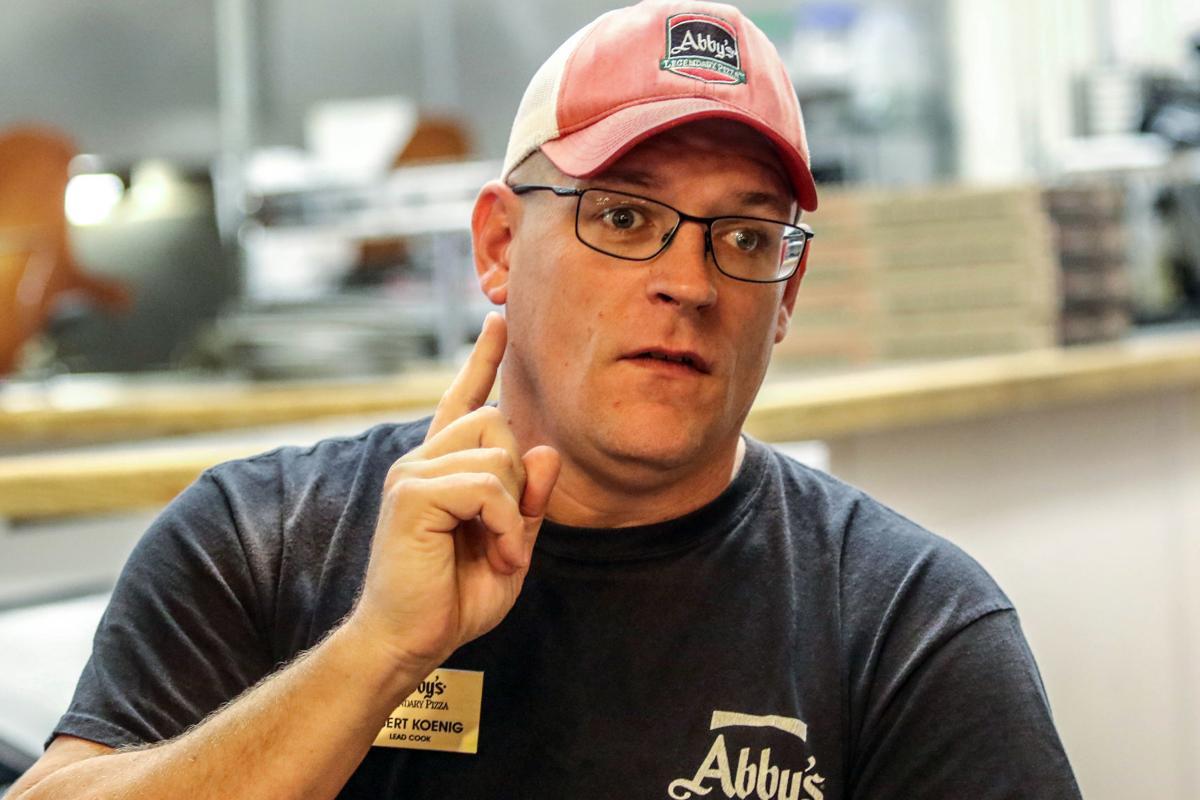 Robert Koenig, lead cook at Abby’s Legendary Pizza on Northeast Stephens Street, signs a response to a question. Koenig, who is deaf and legally blind, struggled to find employment for years until Abby’s hired him 1 1/2 years ago.

Robert Koenig, lead cook at Abby’s Legendary Pizza on Northeast Stephens Street, signs a response to a question through an interpreter Monday. Koenig, who is deaf and legally blind, struggled to find employment until Abby’s hired him 1 1/2 years ago.

When Robert Koenig first met his wife, Maren, it had to be a sign.

Maren Koenig had been looking for a way to learn American Sign Language while she was going to school at Umpqua Community College, but she had a hard time finding any places that could teach it. Her opportunity came more than five years ago while waiting for a bus to take her to class. And she met her future husband at the same time.

“We were waiting at the bus stop and I said something about the weather, and Robert pulled out a note pad and wrote, ‘I’m deaf, what did you say?’ So we got on the bus and it was hard to write, so I gave him my Facebook and we just started talking and I asked how you learn signing,” Maren Koenig said.

And so began the romance more than five years ago. Last Sunday, Robert and Maren Koenig were married at the Camas Valley Christian Fellowship.

For Robert Koenig, who has been legally blind and deaf since birth, his marriage to Maren Koenig has topped everything else in his life.

“I’ve wanted to be married for a long time,” he signed Monday.

Until Abby’s Legendary Pizza, Maren Koenig watched many employers hesitate to give Robert Koenig a job because of his extreme communication challenges. He’s been deaf since birth, is completely blind in one eye and has very limited vision in the other. The sight and hearing loss stems from usher syndrome and an eye disease called retinitis pigmentosa. In short, his one eye with limited sight has no peripheral vision. Doctors say there is no cure, and his remaining eyesight will worsen over time.

It was during a deaf Bible study group at Abby’s a year and a half ago when Robert Koenig decided to apply for a job. He was soon hired, and less than two years later Robert Koenig has risen to the position of lead cook. Considering the fast-paced environment and the need for attention to detail, it’s a remarkable achievement for the 37-year-old, agreed Deanna Pooler, acting manager for Abby’s on Northeast Stephens Street.

“Robert doesn’t let his different abilities slow him down, he makes allowances to make sure that he is more aware when he’s crossing the dining room, it can be pretty unpredictable, and he’s become very careful,” Pooler said. “His attention to detail is phenomenal and while his sight is limited, he knows what to look for where he can see.”

As lead cook, Koenig is in charge of running the kitchen during the morning shift at the restaurant.

“I mostly cook. In the morning, I take care of setting up the buffet pizza and starting with lunch prep and starting orders for pizza that comes in, making sure the kitchen is clean, helping other workers that need help, and doing whatever is necessary in the restaurant and in the back,” he signed. “And before I go home, I make sure everything is restocked and reloaded for dinner.”

It’s not without some challenges, he signed.

“It’s being able to see my surrounding area — there’s a lot of people around me,” he signed. “At first, the difficulty was to read (the order), but later Deanna and I came up with a phone app called Live Transcribe, and it makes it easier with communication.”

Pooler converses with Koenig by speaking into a phone that transcribes every word so he can see the conversation, then can type a response as needed.

Koenig is thankful that the people at Abby’s gave him a chance to show what he could do.

“It’s become the best job I’ve ever had, I’m very grateful for all of my fellow employees, all of the people that work here are extremely eager and willing to learn basic signs and utilize communications technology that we have available to communicate with me. When they walk by me, they touch me so I am aware of their presence, so I know they are right by me and I won’t knock them down,” he signed.

His sight in that eye continues to deteriorate, but his goal is to continue working there as long as he can.

“I want to continue working until the time comes that my eyesight just gets too bad,” he signed. “It’s slowly degenerating every year and my scope of vision is becoming narrower. I do plan to work here as long as possible because I feel like I belong here and all the people I work with are like a family to me.”

Koenig wears a fold-out red, white and black cane on his belt that he uses to show others that he has hearing and sight issues. He spent two months at the Helen Keller Institute in New York improving his communication skills and has traveled to other countries to teach communication skills to others. He has been on missions for his church, going to Romania and Cuba to teach the Bible in sign language and plans to go back to Cuba in March to continue work there.

Maren Koenig had to come to grips with all that comes with her husband’s vision and hearing challenges.

“You can’t just yell across the house, and say, ‘Hey could you get me something?’ I mean there are two disabilities there,” she said. “I had to make a choice and I don’t regret it, it’s given me a lot of patience, increased my character, so it’s been good for me, too.”

Robert Koenig studies his wife intently while leaning up against a kitchen counter. Maren Koenig signs a response from Pooler about what her husband means to Abby’s.

A big grin spread across his face as he looked up at the ceiling.

The huge smile needed no interpretation at all.

Cozy airplane is an attention-getter

2nd Chance Ranch purchase falls through due to funding delay

Cozy airplane is an attention-getter

Okay! Who on Earth are the three people who are angered by this article? Why do you feel that way? What's wrong with you guys?