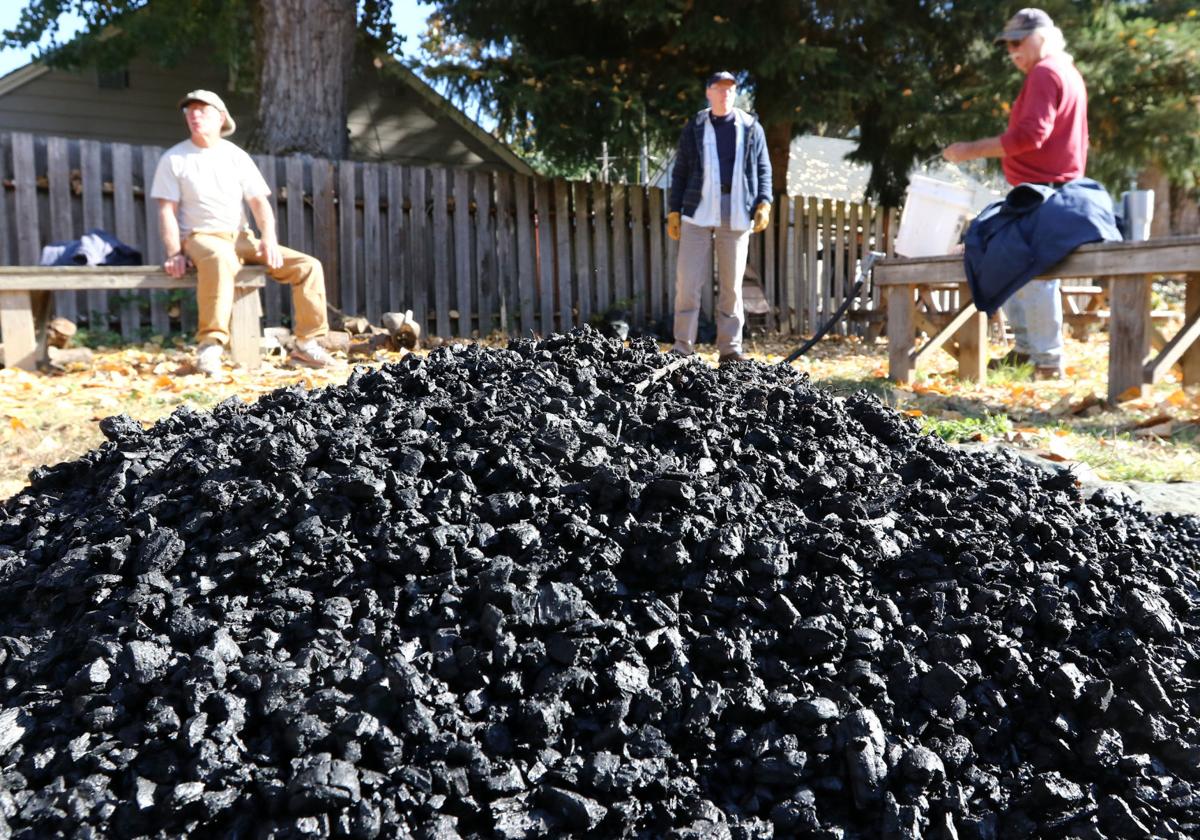 A pile of biochar produced at a demonstration in Roseburg on Saturday. 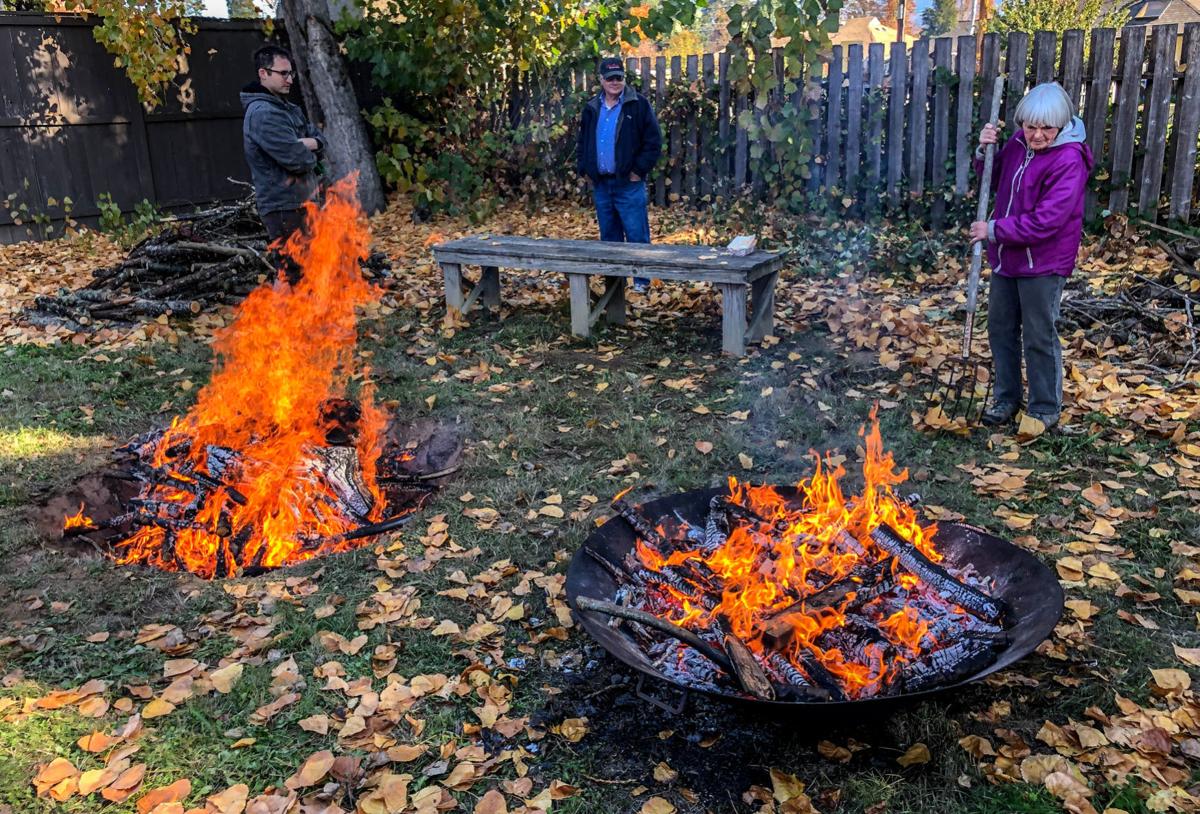 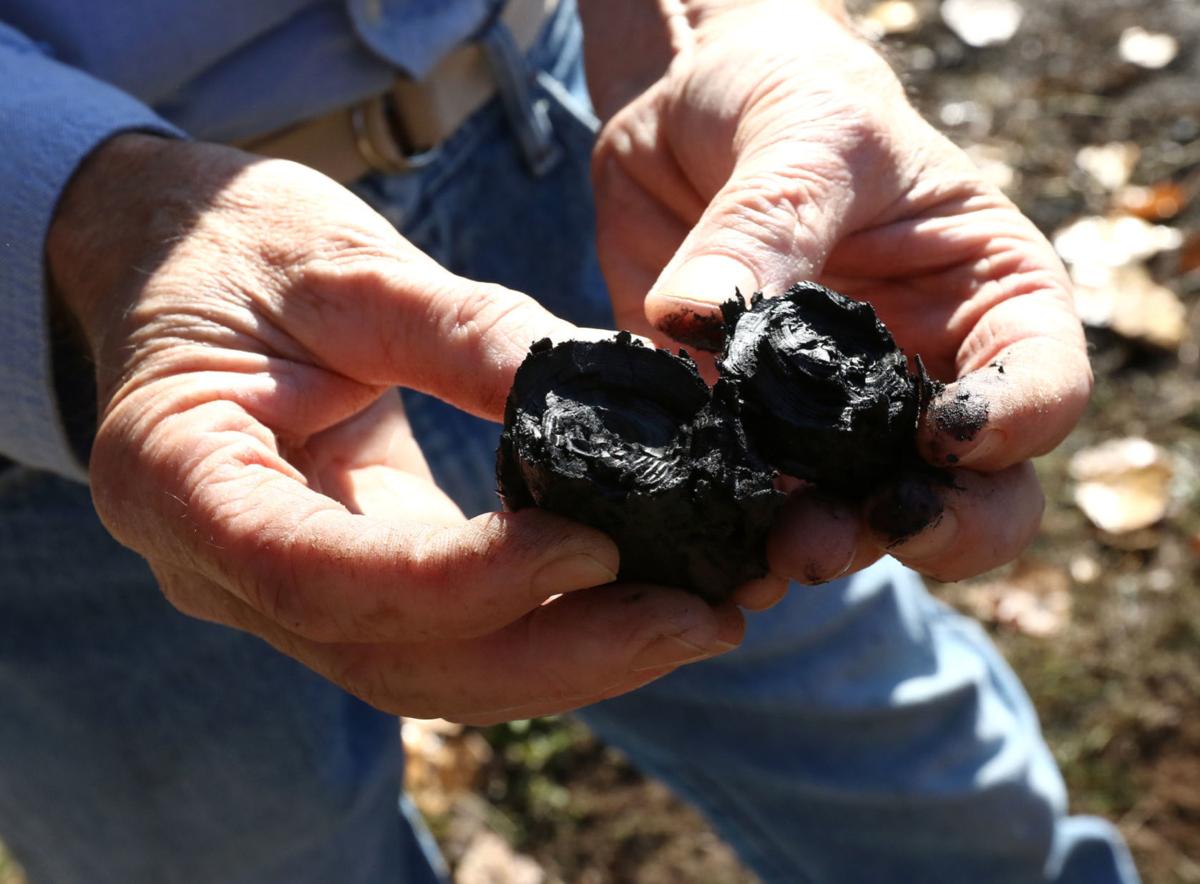 Dennis Morgan of Umpqua break open a chunk of charred wood from a pile of biochar produced at a demonstration in Roseburg on Saturday. 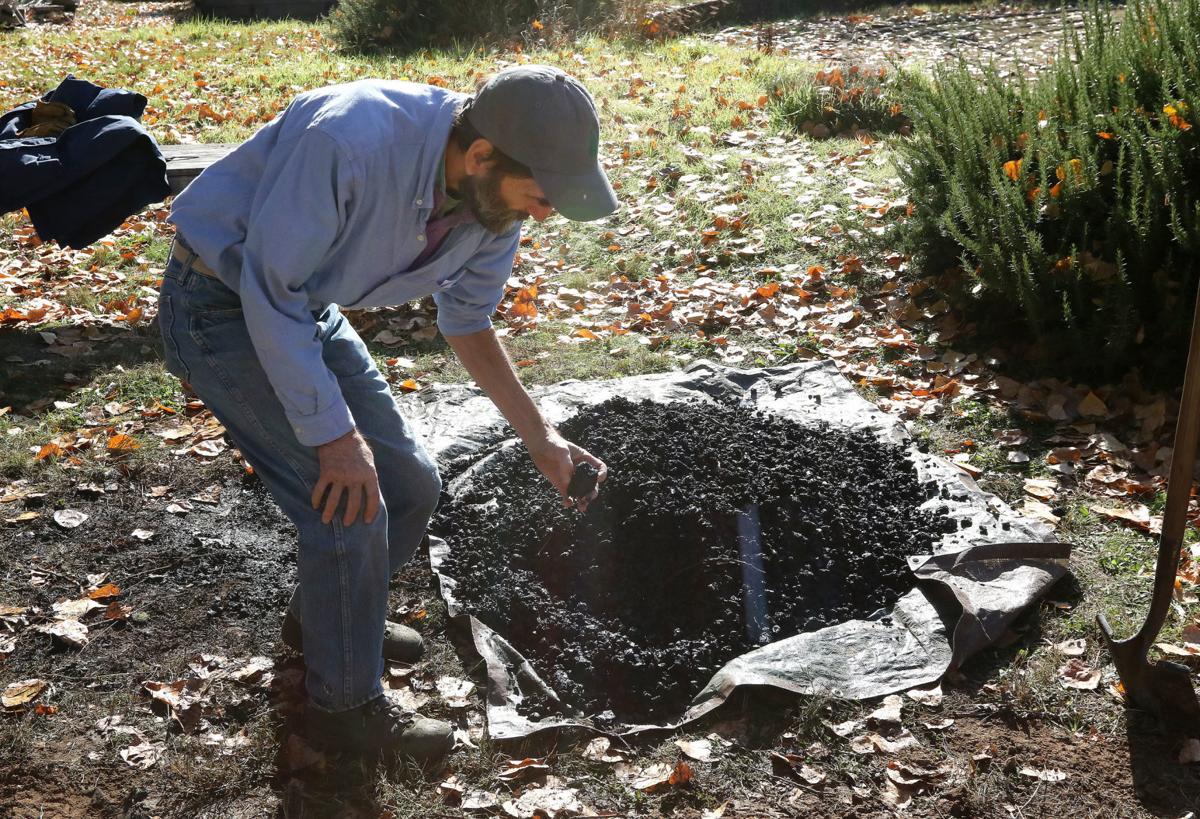 Dennis Morgan of Umpqua selects a chunk of charred wood from a pile of biochar produced at a demonstration in Roseburg on Saturday. 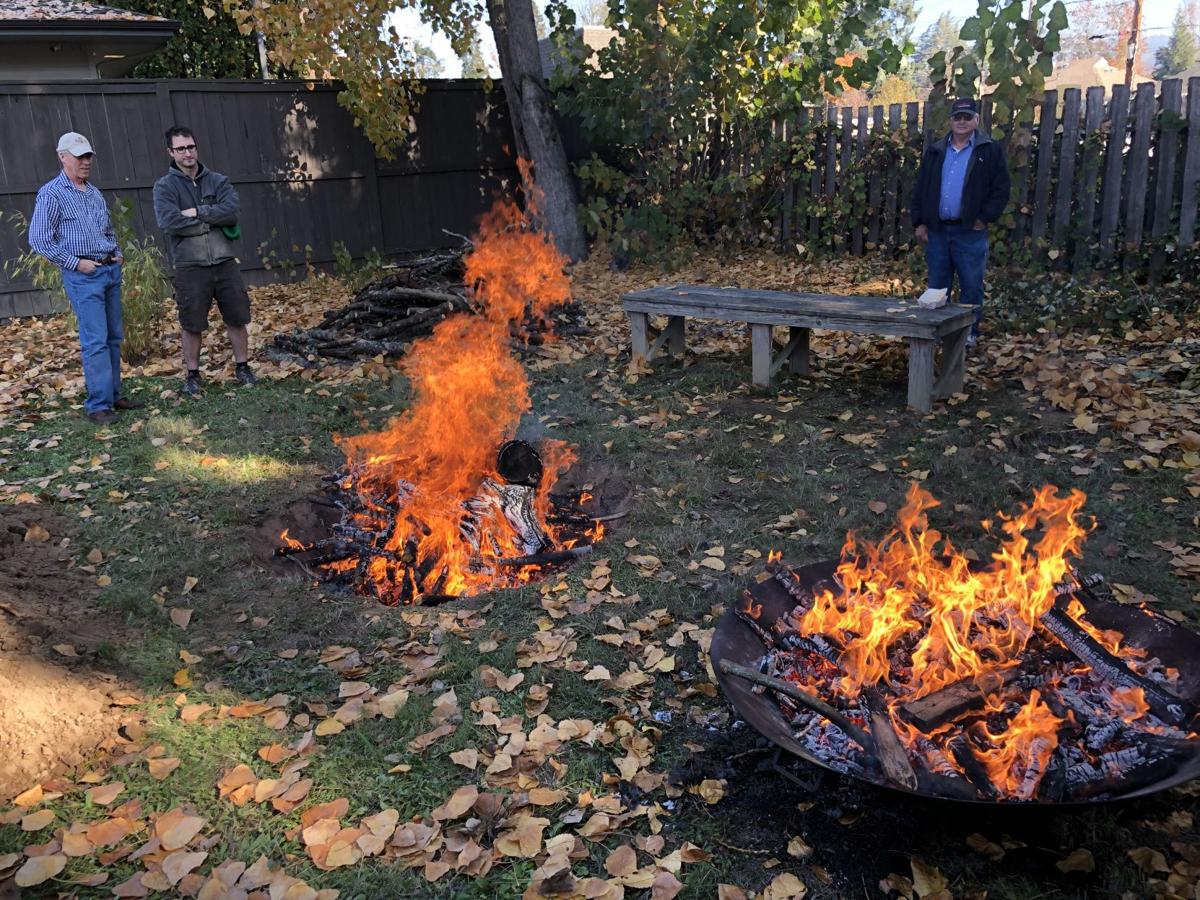 A pile of biochar produced at a demonstration in Roseburg on Saturday.

Dennis Morgan of Umpqua break open a chunk of charred wood from a pile of biochar produced at a demonstration in Roseburg on Saturday.

Dennis Morgan of Umpqua selects a chunk of charred wood from a pile of biochar produced at a demonstration in Roseburg on Saturday.

The benefits of biochar — a charcoal-based soil amendment — were on display during a demonstration at the Farmer’s Market in Roseburg on Saturday.

The Umpqua Biochar Education Team, which has been promoting biochar in Douglas County for about 12 years, hosted a demonstration showing how to make biochar in the garden area behind the First United Methodist Church on West Harvard Avenue in Roseburg by the Umpqua Valley Farmer’s Market.

Fire pits showed how to burn the wood to maximize the amount of charcoal that’s left to create the best biochar to use for soil enhancement. The demonstration featured a low cost, fire pit method of producing biochar, and a discussion of the benefits of biochar in the soil.

“There are no nutrients in biochar, but it has its own advantages in agriculture,” said UBET chairman Scott McKain. “One is it stores water, two is it stores nutrients, and three, it enhances the biology of the soil so it’s quite effective.”

McKain said the Umpqua Valley is susceptible to nutrient leaching during the winter and the biochar will hang onto the nitrogen and phosphorous keeping it from going into the subsoil. Charcoal in the soil, he said, will last thousands of years and as an additive it keeps working as a permanent part of healthy soil.

“It’s a natural component, certainly of our soils, and we live in a fire ecosystem,” McKain said. “Now we’re learning how it enhances the chemistry and biology of soils and we’re applying this to agriculture.”

McKain said it is helpful for people with home gardens to use charcoal in their soil, especially those with heavy clay, which is very prevalent in Douglas County, and the biochar that was made during the demonstration will go into the Westside Community Garden between the church and Fremont Middle School.

“Char mixed into a heavy clay will really loosen it up. People are just amazed at what happens to a clay soil, it gets fluffy,” McKain said.

The purpose of the expo, which UBET conducts once a year, is to teach people how to make the charcoal most efficiently and it allows them to find out more about the benefits of mixing it in with the soil.

“There are burn techniques to make a quality biochar and just a plain open burn isn’t one of them,” McKain said.

McKain said there is also a process of mixing it in the soil and he doesn’t encourage people to till if they don’t need to.

“The easiest way to do it is to put the biochar into the compost pile and it will absorb the nutrients that are being released in the compost and then when the compost is applied to the soil the char is included,” he said. “And it makes the composting go faster.”

McKain said people have heard about the process and are curious to see it and they will go home and try it.

“First of all what happens is that the clay loosens up, but the biology, they won’t notice for a couple of years and it’s a shift in the soil microbes towards the fungal side of things and suddenly there’s a lot more organic material in it, and they didn’t add it, the biology did. The lesson is that your burn pile is probably more valuable than your compost pile is.”

McKain said there is actually a manufacturer of biochar in White City (Oregon Biochar Solutions) that sells sacks of biochar for those who don’t want to go through the process of making their own.

Biochar works wonders in the garden. As Scott indicated, it holds on to nutrients and water, while simultaneously making it available to plants. It houses mycorrhizal fungi, which help transport these nutrients and water to your garden plants. It fluffs the soil, and it hangs around for hundreds of years. Scott has been using it in his garden for a dozen years or so, and I've been using it in mine for six or eight years. Combined with no – till gardening and use of cover crops, biochar is a win win win for gardeners and the environment. I recommend that every gardener research it carefully, and give it a try. Also: if you have chickens or livestock, know that biochar hangs on to the nitrogen (ammonia), and keeps the smell down in your chicken house, or wherever you manage the manure.