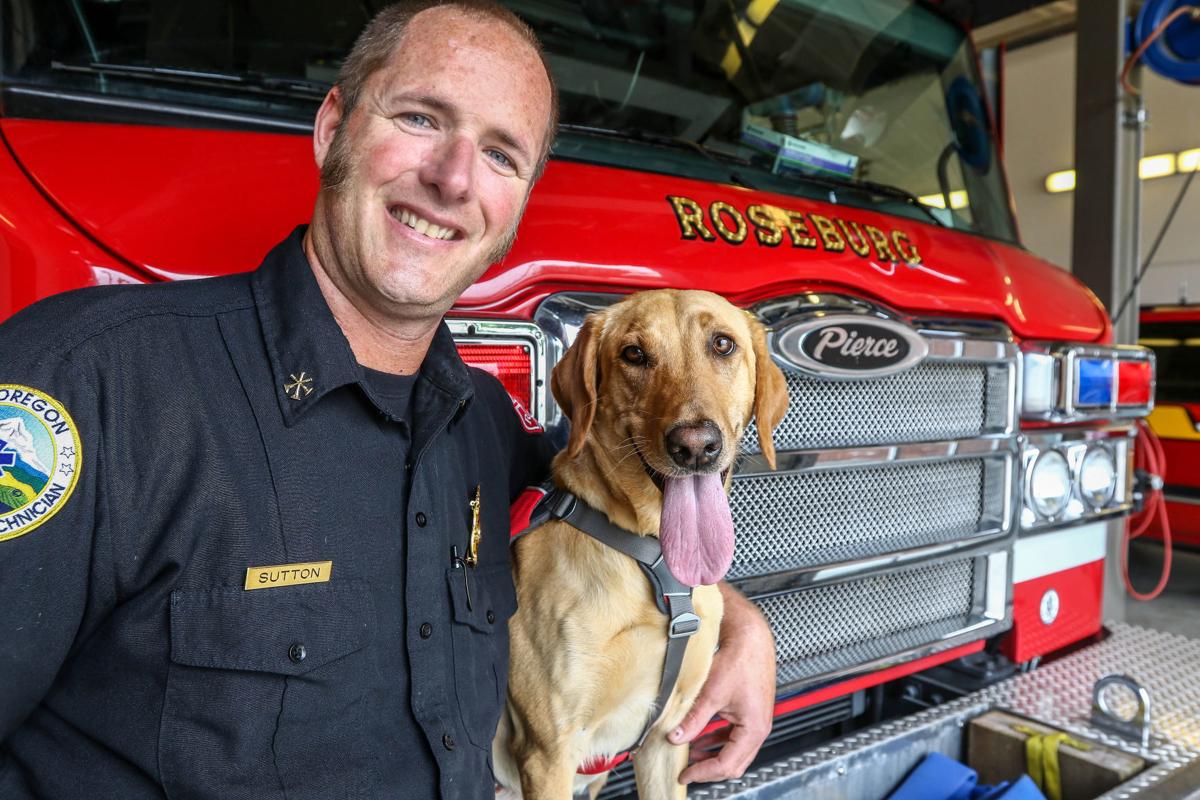 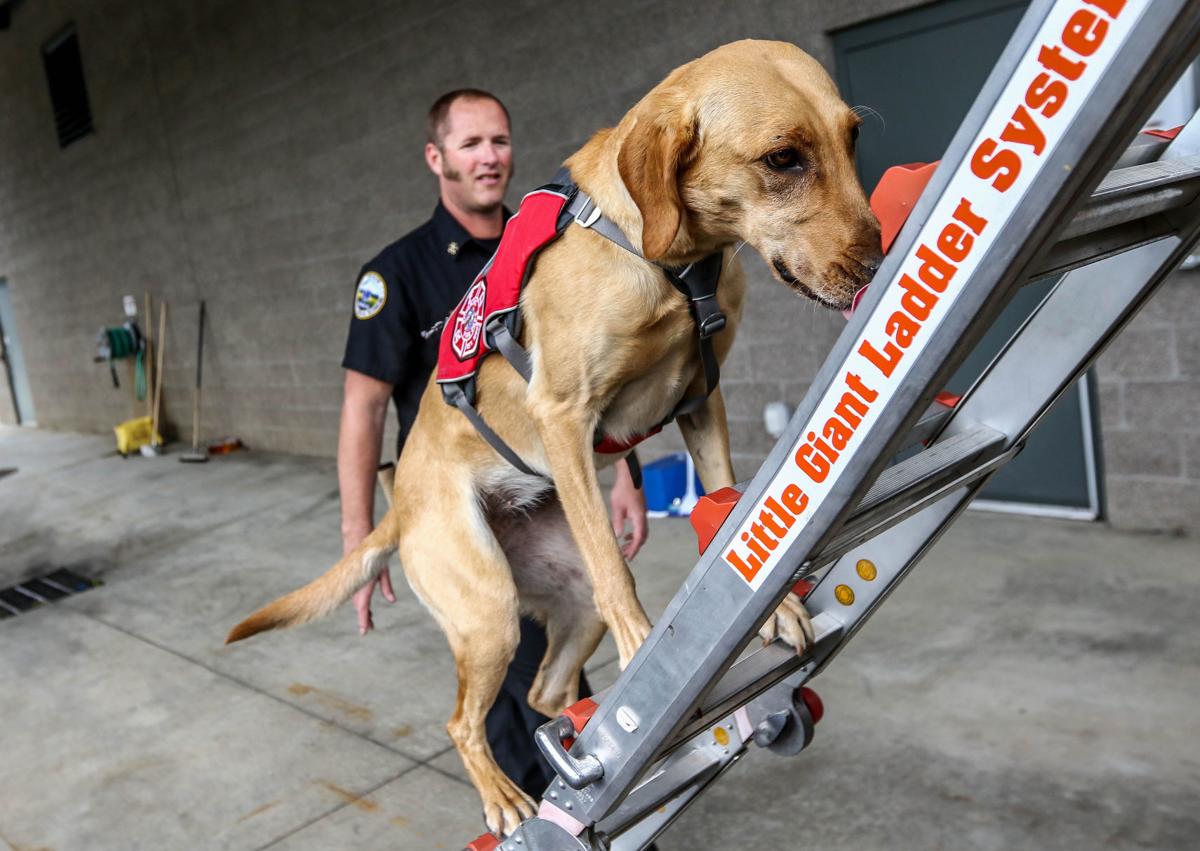 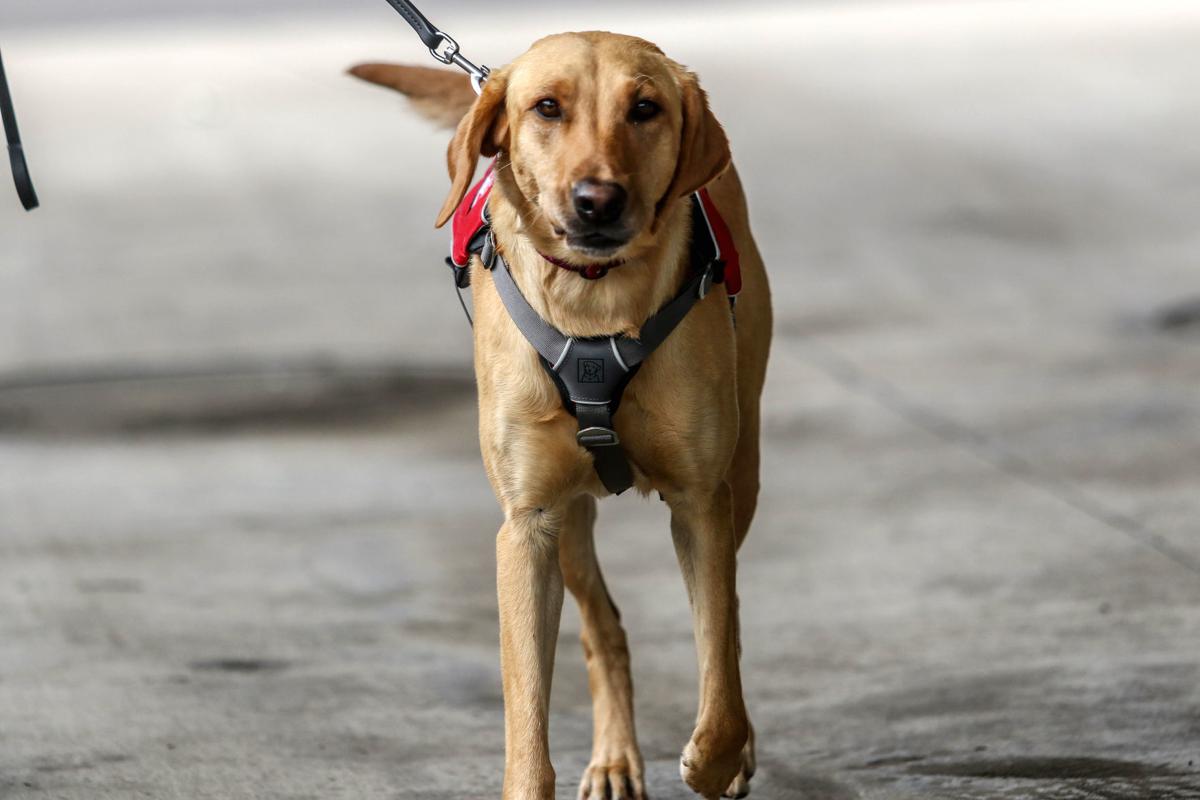 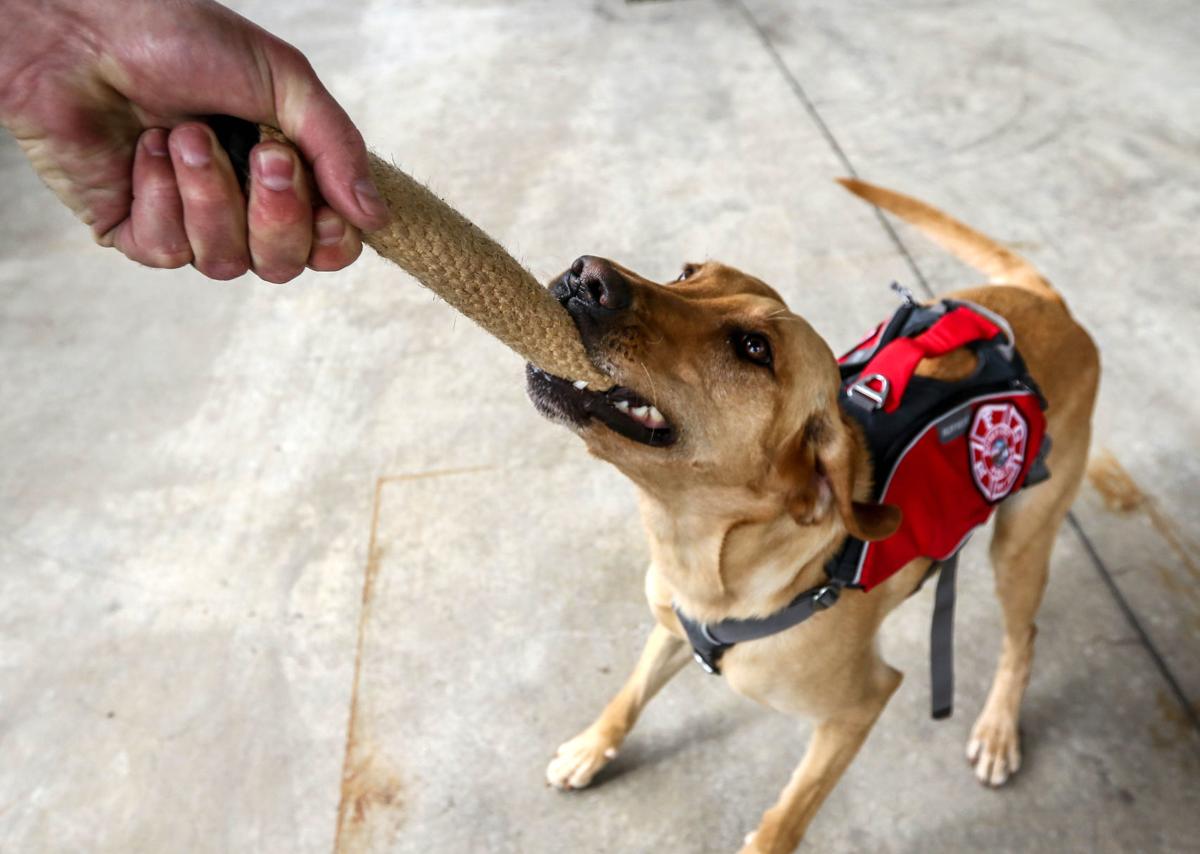 Poppy, a new public relations and search and recovery K-9, tugs at her toy with her handler, Chris Sutton. 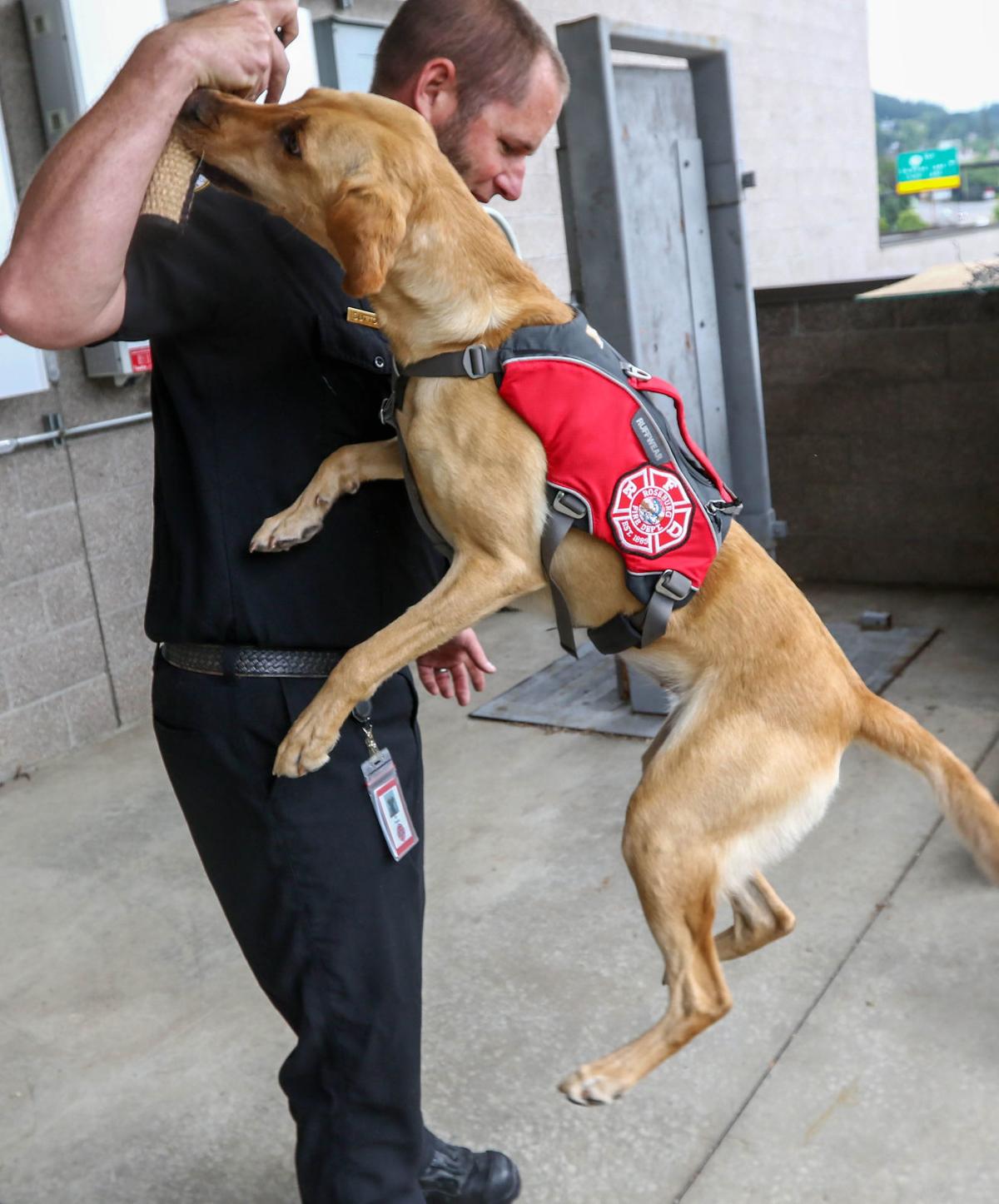 Poppy, a 2-year-old Labrador retriever, grabs at her toy held by her handler Chris Sutton. 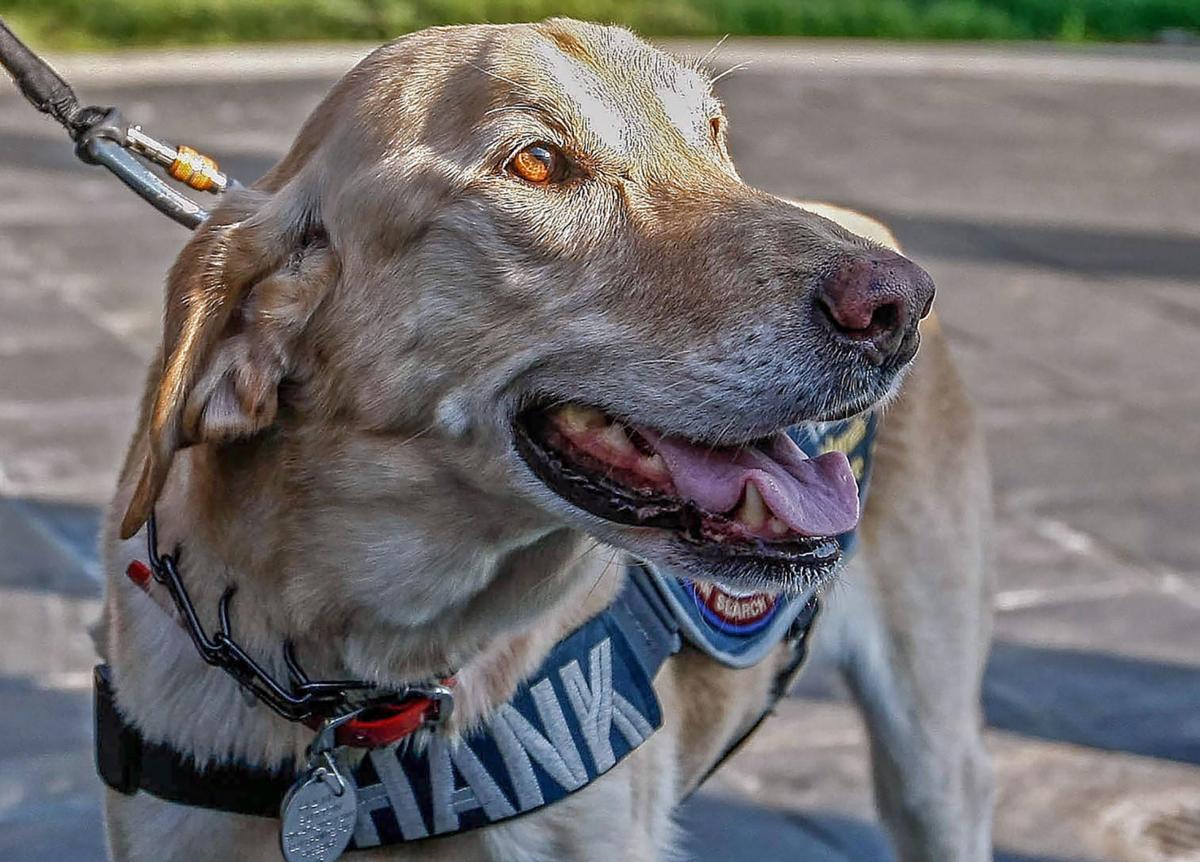 Hank, a former search dog for Roseburg Fire Department Battalion Chief Chris Sutton, is seen during an event in 2017 before dying of leukemia.

Poppy, a new public relations and search and recovery K-9, tugs at her toy with her handler, Chris Sutton.

Poppy, a 2-year-old Labrador retriever, grabs at her toy held by her handler Chris Sutton.

Hank, a former search dog for Roseburg Fire Department Battalion Chief Chris Sutton, is seen during an event in 2017 before dying of leukemia.

Still feeling grief from the deaths of their two search dogs less than two years ago, Roseburg Fire Department Battalion Chief Chris Sutton and his wife, Hannah Sutton, knew some time had to pass before they would consider a new dog.

Poppy will have multiple duties with the department — not only searching for human remains, but also doing a lot of public relation work in the community. Poppy has a K9 Good Citizen certificate so she will be used her for public relations with kids and outreach groups.

“Of the three dogs I’ve worked with, she’s definitely got the best balance of the friendliness to engage with the public and the drive to work, she’s very well balanced,” Chris Sutton said. “She’s very friendly and very energetic and very high drive which is what we look for in these dogs.”

Because Chris and Hannah Sutton are trained handlers for Poppy, the dog is also the latest member of the Sutton household.

Poppy comes after the Suttons lost Hank, a yellow Labrador who was trained to search for live victims, to cancer in October 2017. Chris Sutton had been paired with Hank for six years and brought him to Roseburg when he was hired by the Roseburg Fire Department in early 2017. Just two months before Hank died, the Suttons lost Cascade, a golden retriever and an avalanche dog, while they were still living in Colorado.

“Obviously we’ll never replace those boys but Poppy definitely fills that gap of that partnership,” he said. “Hank was with me pretty much 24/7, always at the firehouse and I traveled everywhere with him, and Poppy has definitely filled that gap for us.”

After the two dogs died, it took a while before the Suttons were ready to get another dog.

“It was pretty tough, they died within months of each other,” Chris Sutton said. “Filling the void and having the partnership of the dog again has been great, but Hank and Cascade ... those two taught us so much about training and working and the partnership with canines, and really set us up for success in working with Poppy.”

For Hannah Sutton, losing Cascade was emotionally difficult because she’d handled him since he was a puppy and bonded and worked with him for several years.

“That was very hard for me when the dog died, and Chris had a special bond with both of the dogs,” Hannah Sutton said. “Poppy has been a great family member, and has definitely filled the void for the boys,”

Roseburg Fire Chief Gary Garrisi approached Chris Sutton about a K9 program, shortly after the deaths of Hank and Cascade. So Mountain View K9 Training in Highland, California, was contacted last July and Poppy ended up in Roseburg. Chris Sutton says Poppy’s talents will be a good addition for the fire department.

“She is a trained human remains detection dog,” Chris Sutton said. “Disaster scenarios, floods, natural or man-made disasters, she could locate people, that’s the biggest benefit and her main mission.”

Garrisi can approve requests outside the county to use Poppy, so the dog could serve agencies anywhere in the region.

“I think it’s a great resource, not only for our community, but also for the region as a whole when it comes to search and rescue and recovery, so I think it’s a positive thing,” Garrisi said.

At 2 years old, Poppy still has a lot of energy and loves to play, but when it’s time to work she is focused.

To be certified, Poppy had to go through a lot of training, testing on her obedience, agility — she’s even learned how to climb a ladder — she is checked on her social ability with humans and other dogs, and her dedication to a scent.

The dog is not trained for live scent yet, but Chris Sutton is hopeful that eventually, he will be able to cross-certify her for finding live victims. Meanwhile, Hannah Sutton is working on getting certified to handle Poppy on searches too.

“She’s been trained in fire scene and disaster work and now with the county team, we’re kind of expanding her into wilderness stuff, so we’re trying to make her well generalized, so whatever the county needs we want to be a resource,” Chris Sutton said.

The Suttons are excited to have Poppy in their family. And there will soon be another member to their family. They are expecting their first child.

One dead in motor home fire in Green