Residents of southeastern Roseburg have filed a petition to recall City Councilor Ashley Hicks. In a statement, the group said Hicks has failed as a councilor and has created a “wedge between the citizens and our government.”

In an email to The News-Review, Roseburg city staff said the petition was filed shortly before 5 p.m. Thursday. Since it met all state statutory requirements, the chief petitioner can begin collecting signatures.

In a press release sent to multiple news agencies, chief petitioner Tommy Smith said he had “grave concerns about (Hicks’) ability to lead and represent our entire Ward.”

He added that since Hicks’ election, his concerns “have proven to be well founded.” Hicks was sworn into office in January. Her current term expires at the end of 2020.

Hicks did not respond to a request for comment.

Hicks has been a controversial figure in Roseburg, particularly in Ward 4, the southeast Roseburg district that she serves. The former coffee shop owner has had numerous run-ins with homeless communities. She recorded many of these encounters and posted them to Facebook.

As a councilor, Hicks has requested city staff to remove a locked metal biohazard box in Micelli Park, citing her fears that children could come into contact with the sharp needles within it.

Bookended by police vehicles, the parking lot of Micelli Park in southeast Roseburg served a…

Only registered Ward 4 voters can sign the petition. Then the petitioners need to gather signatures from at least 15 percent of the total registered voters in that ward who voted in the last gubernatorial election in 2014. That means they would need to collect at least 288 signatures.

If they get enough signatures, Hicks will have five days to resign. She can submit a statement of justification if she believes she should not be recalled.

If Hicks refuses to resign, the city would need to hold a stand-alone election less than 35 days after her deadline to resign.

If Hicks resigns, the council would declare a vacancy and begin accepting applications to fill that position.

The petition, sent out in its entirety by Betsy Cunningham, a member of the southeast Roseburg neighborhood watch group, reads as follows:

Her actions have alienated individual residents and members of volunteer community organizations. The citizens of Ward 4 now have to seek assistance with city government from others instead of our elected Ward representative. She has not only refused to work with the residents, she has even gone on a campaign to undermine community improvement activities in Ward 4.

Since taking office: Ashley Hicks threatened a local business person and a resident who exercised their rights to redress grievances with the Roseburg City Council. She made untruthful statements, about residents of Ward 4, as well as city staff. She has also used her position on the city council to threaten, bully, and intimidate city staff when they wouldn’t comply with her demands.

The residents of Ward 4 just cannot afford to have her continue in office. We have no other options. Recall Ashley Hicks.” 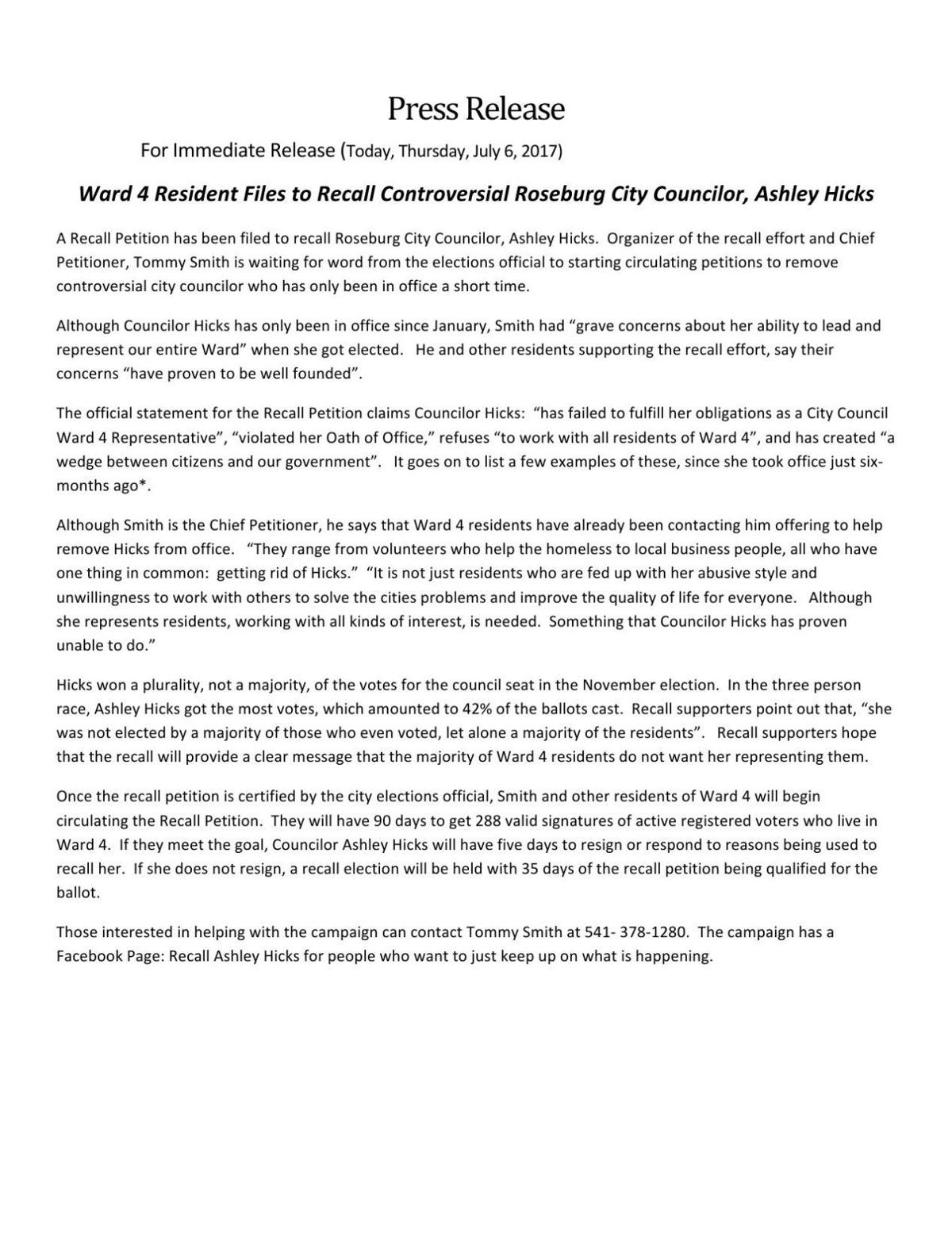 This story will be updated as more information becomes available.

Beirut blast had same materials as Roseburg blast of '59

Work to start soon on memory care home in Roseburg

Beirut blast had same materials as Roseburg blast of '59

Work to start soon on memory care home in Roseburg

Besides cleaning up a filthy park what horrible crime(s) has she committed?

Ms.Hicks,please do the right thing and save the city time,energy,and money. Resign now.

It had to happen to maintain the peace in this area

No, the surprising thing was how she got elected in the first place.

I'm not sure what you mean. How did she get elected (I don't live inside the city limits)?

this doesnt surprise me a bit