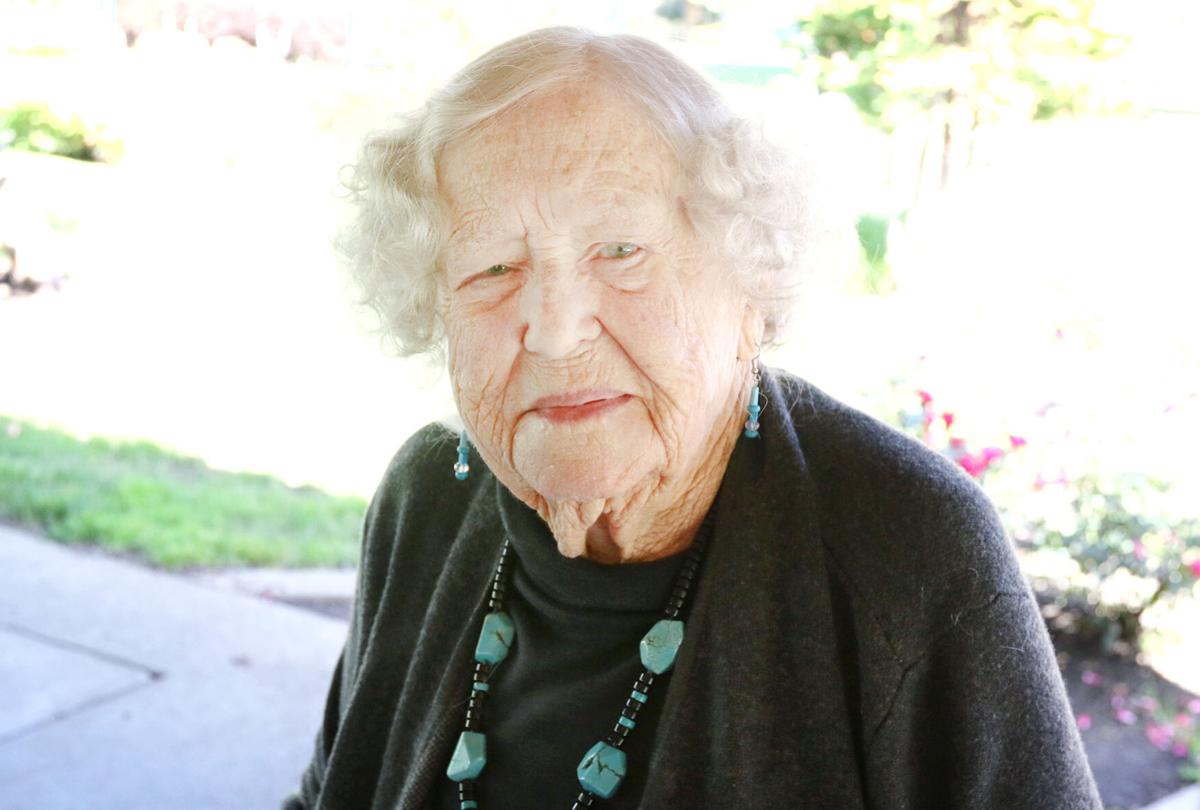 Marie Lackey turned 106 on Thursday. She credits her life-long curiosity with keeping her mind sharp. 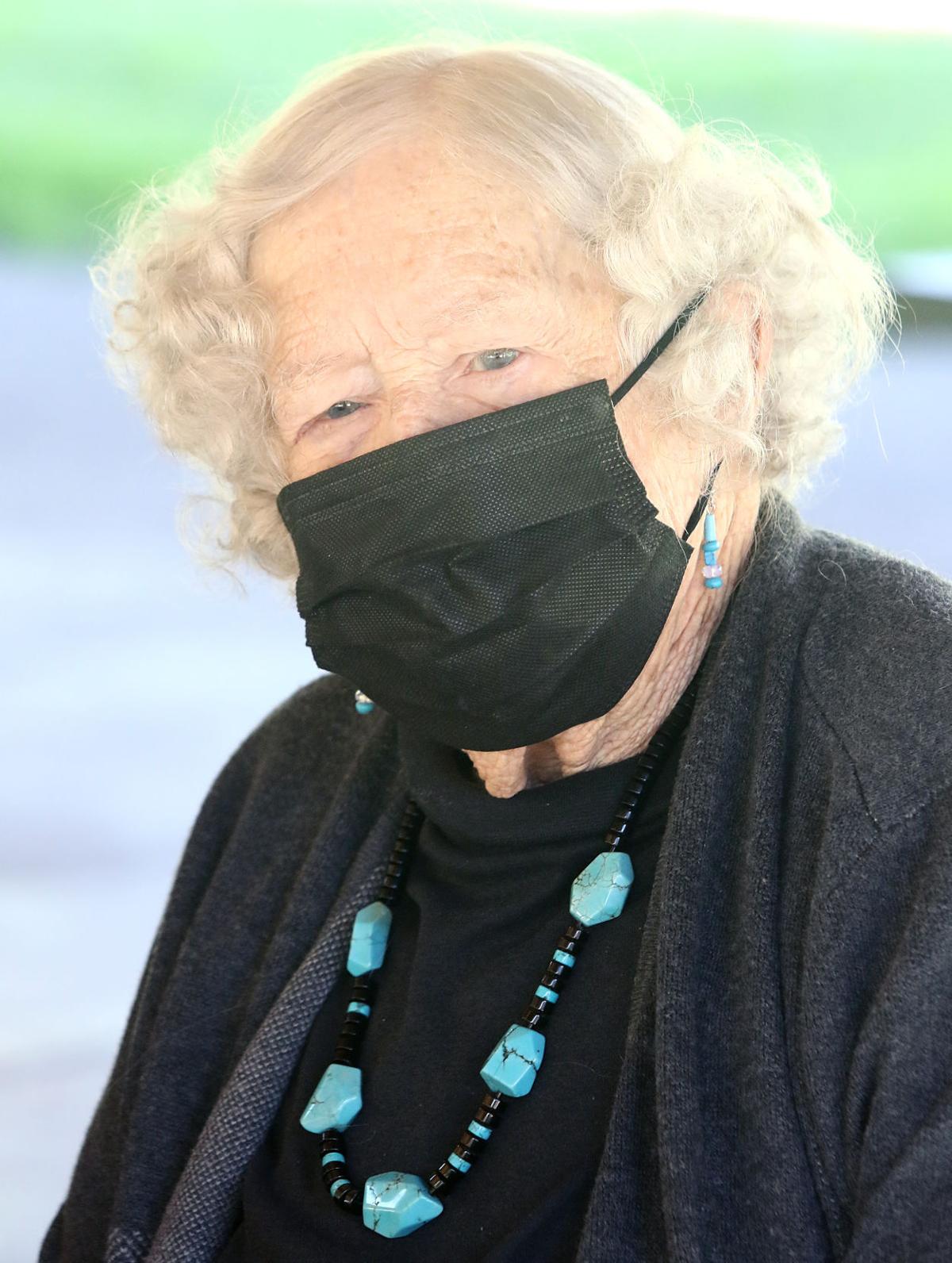 Marie Lackey discusses her life in Roseburg on Wednesday, the day before her 106th birthday.

Marie Lackey turned 106 on Thursday. She credits her life-long curiosity with keeping her mind sharp.

Marie Lackey discusses her life in Roseburg on Wednesday, the day before her 106th birthday.

Marie Lackey was born on a farm between two small Nebraska towns, Gering and Melbeta, on Oct. 7, 1915.

In her long life, she’s lived through a tornado in Nebraska, earthquakes in California and two virus pandemics — the Spanish flu in 1918 and COVID-19.

She turned 106 on Thursday.

Two world wars have taken place during her lifetime as well.

Her earliest memory is from November 1918, after the armistice was signed that ended World War I.

She recalled her parents awoke her at midnight, and she saw an effigy of Kaiser Wilhelm, the German emperor, that had been set ablaze on top of a nearby water tower.

It was about midnight, she said, and she was woken by her parents. She recalls being frightened by the incident.

About a year after that, Lackey broke her arm after a fall at her grandparents’ home.

“The doctor said I had to have my arm amputated, but my parents luckily heard of another doctor in an adjoining town and took me there,” she said.

This second doctor said he could treat her arm and prevent amputation.

She liked him because he kept lots of small stuffed animals in his office. She made multiple visits and recalled that flaxseed poultices were part of the treatment.

For the next two years, small bone fragments would work their way out through her skin.

“Eventually that ended, and I’ve used the arm for 100 years,” she said.

Lackey was the oldest of nine children, though two did not survive and not all of them had been born yet when she grew up and left home.

One sister died when she was very small, partly due to burns from gravy that had spilled while cooking on the stove. Another sister died of pneumonia after having contracted first whooping cough and then measles.

All the children who lived graduated from high school. Their parents expected them to do that, she said.

Lackey remembers riding horseback 2 miles to get to school.

There were six in her graduating class at the high school in Melbeta. She was the salutatorian.

She had her first paid job as a teenager during the Great Depression, when a neighbor woman asked her for help dressing chickens for the freezer.

Lackey was excited about earning some money.

“When I got ready to go home, she gave me a dollar. Needless to say, I was very disappointed,” she said.

By the time she graduated, she was already dating Dale Lackey. She’s not sure what it was that attracted her to him in the beginning.

“I didn’t stop to ask myself why,” she said. “He seemed to like to do the same things that I did, but of course we couldn’t do much, it was still the Depression.”

Most of their entertainment was riding in Dale Lackey’s car.

“He did have a car of sorts,” she said, but “it wasn’t always in good running condition.”

Once, on a 12-mile journey into Gering, her boyfriend’s car had 17 flat tires driving into town. Somebody would patch the tire, and they’d go on, she said.

Their wedding, the November after graduation, was very simple.

“We just went to the courthouse, got our license and went to the church and were married. I don’t think we even had made an appointment,” Lackey said.

They went to the high school and handed out candy in celebration. Her parents learned about the marriage when somebody read it in the paper and told them, she said.

“It wasn’t a very good start, but Dale was really a part of the family for the rest of his life,” she said.

Dale Lackey was a plasterer in construction, but in 1942 he decided things were better in California than Nebraska.

So they loaded the three children they had at that time in the backseat of the car and moved to Richmond, California, in the San Francisco Bay Area. At first, Dale worked down at the shipyards. Marie stayed home with the kids.

“We had more money than we had ever had, so we liked that,” she said.

Their main pastime was driving up on the hills surrounding Richmond and watching the lights downtown.

One thing she didn’t like was having to turn off the lights when there were fears of nighttime bombing during World War II.

Another thing that was tough was that there were no places to rent so they lived for two years in the garage of Dale’s brother’s house.

Eventually, they built a house, and after the war, Dale worked on plastering for skyscrapers being built in Oakland, California.

In 1972, they moved to Oregon and Dale got a job teaching plastering at the Wolf Creek Job Corps.

“Dale said that was fulfilling a dream he had, being able to help young people,” she said.

About 30 years ago, they moved to Roseburg.

Lackey said she’s been very happy in Oregon, except for 1992 when she lost Dale to pulmonary illness.

So what is the secret to Lackey’s exceptional longevity?

She has been gifted with good health, only dimmed by poor hearing and eyesight as well as a fall she took two years ago that has limited her mobility.

But she does have some idea why her mind has remained clear.

“I’ve always been interested in people and how they live,” she said.

She likes new things and loves to travel, having visited Ireland to meet her husband’s relatives and toured Taiwan with daughter Alice Lackey.

Alice Lackey has also frequently taken her mother on trips to ride along highways whose number matches her age.

Marie Lackey has enjoyed reading since she was little.

As a young girl, she looked forward to the Cubby Bear stories that came out regularly in Comfort magazine. And she loved books.

“I read any book that anybody would lend me,” she said.

When a library was opened in Melbeta during her high school years, she helped out there and read the books that were donated to it.

Alice Lackey said she’s thankful both of her parents were always curious about things.

There were always encyclopedias at home, and if the kids had questions, they were expected to look up the answers. When the family went on drives, they chose back roads instead of main roads.

“It’s kind of that back road curiosity that they have brought us up in, that I just feel is really important and a nice thing to leave your family with,” she said.

One of the things Marie Lackey is curious about is her ancestors. She’s been researching her genealogy since 1969.

One hundred years from now, she hopes her descendants do a bit of research themselves and discover “that I lived to be 106.”

As remarked by the great Dorothy Parker: "The cure for boredum is curiousity. There is no cure for curiosity."