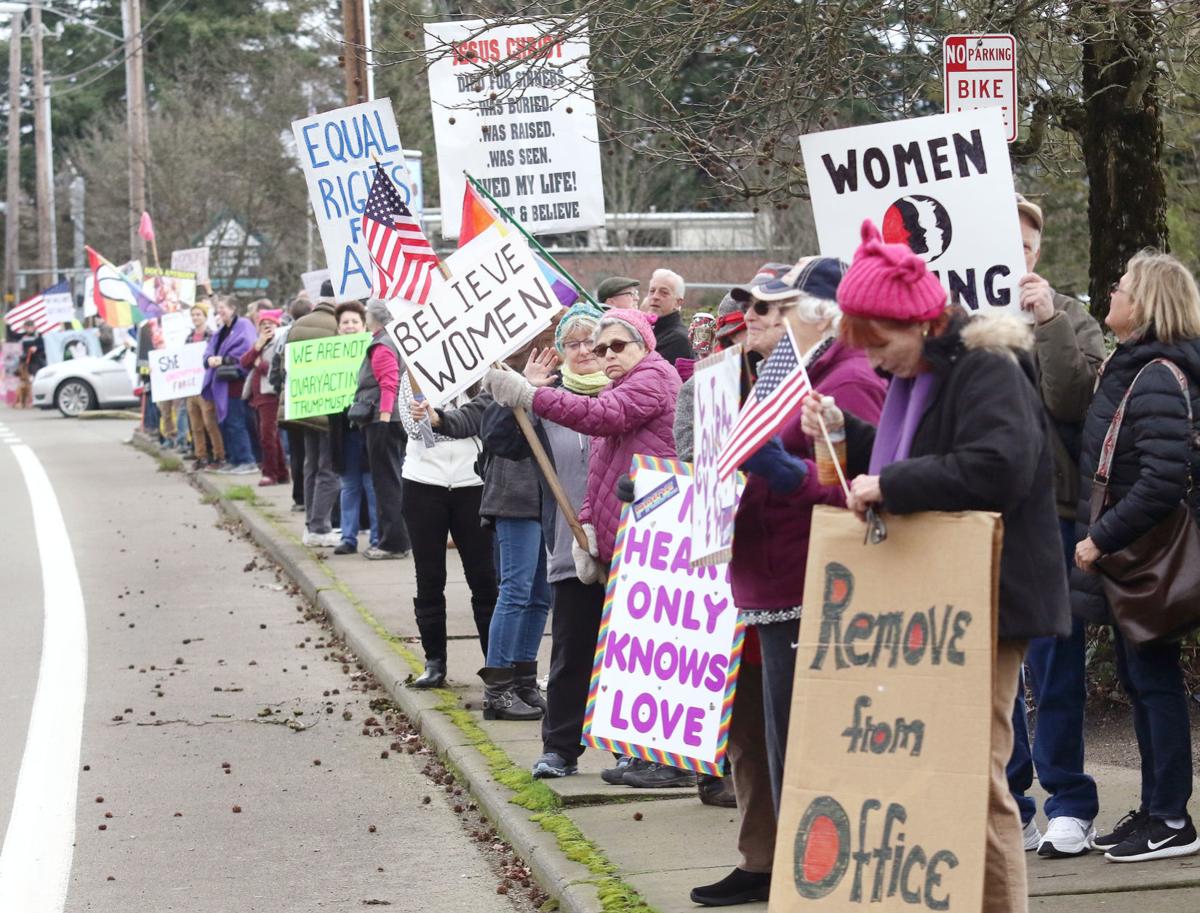 A group of approximately 100 gather on Northwest Garden Valley Boulevard in Roseburg on Saturday for the local version of the Women’s March 2020 events held across the country. 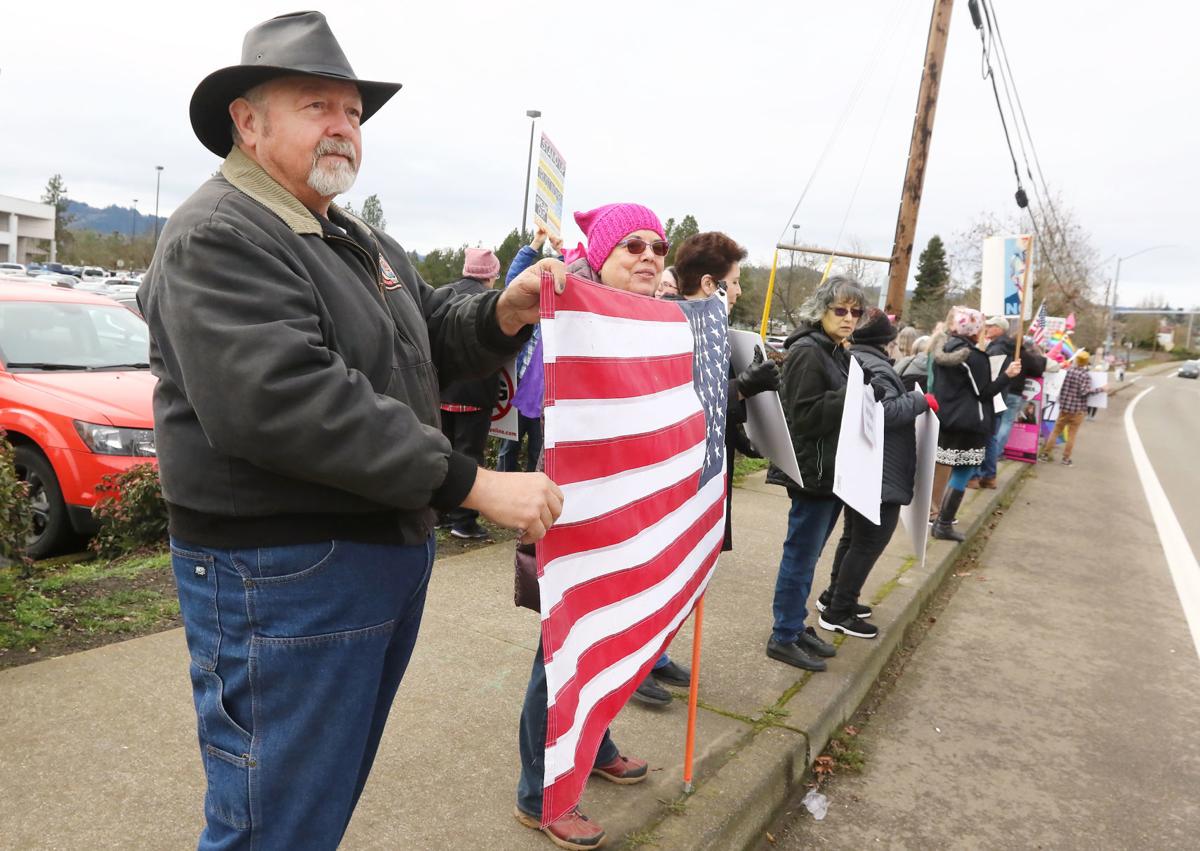 John Aschim, of Oakland, and Trudy Walker, of Idleyld Park, display the U.S. flag amid a mix of participants at the local version of the Women’s March 2020 event on Northwest Garden Valley Boulevard in Roseburg on Saturday. 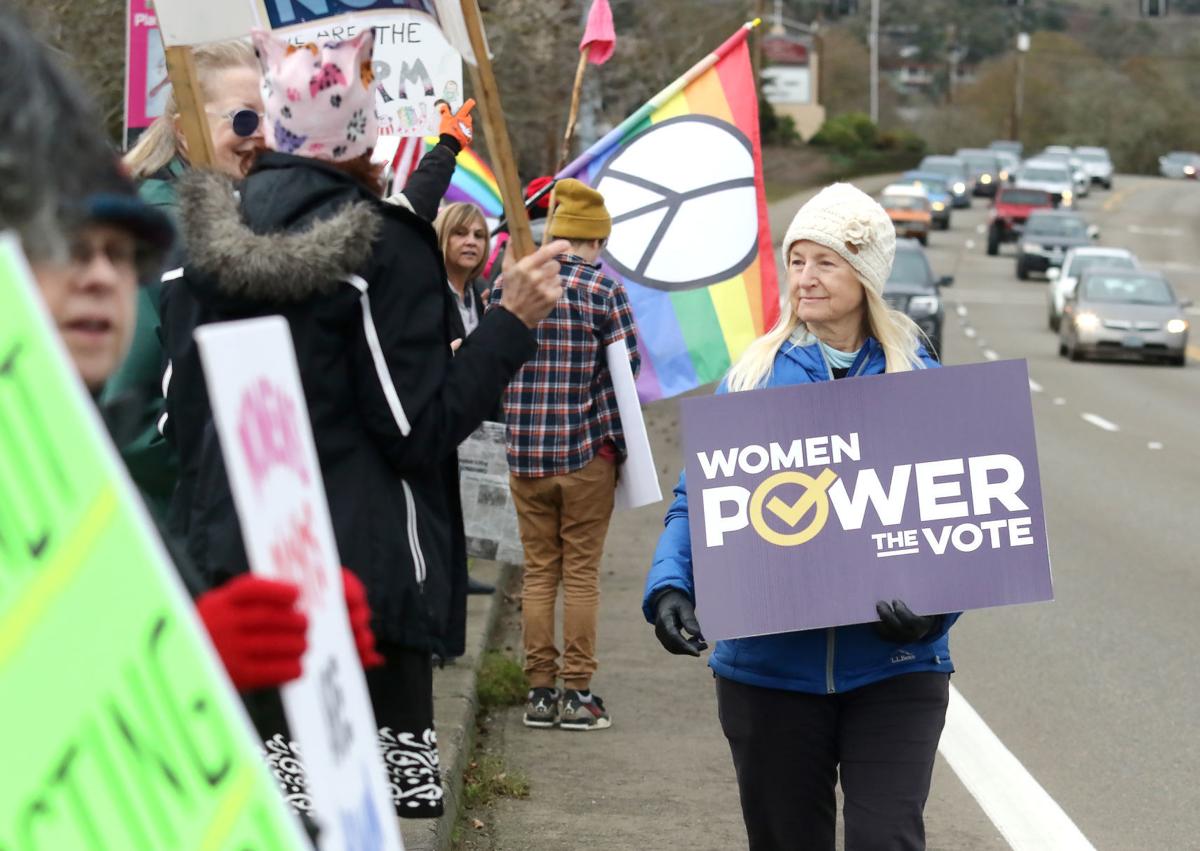 Faye Ameredes of Roseburg carries a sign amid a mix of participants at Northwest Garden Valley Boulevard in Roseburg.

A group of approximately 100 gather on Northwest Garden Valley Boulevard in Roseburg on Saturday for the local version of the Women’s March 2020 events held across the country.

John Aschim, of Oakland, and Trudy Walker, of Idleyld Park, display the U.S. flag amid a mix of participants at the local version of the Women’s March 2020 event on Northwest Garden Valley Boulevard in Roseburg on Saturday.

Faye Ameredes of Roseburg carries a sign amid a mix of participants at Northwest Garden Valley Boulevard in Roseburg.

About 100 people gathered in front of Fred Meyer in Roseburg on Saturday for the local version of the Women’s March 2020 events being held across the country.

Some of the women and men were there to demonstrate opposition to President Donald Trump, some to celebrate the 100th anniversary this year of women’s suffrage and others to voice concern that a more conservative Supreme Court might roll back abortion rights.

Interspersed among them were about 15 counter-protesters bearing signs with gory images of aborted fetuses, speaking loudly through megaphones and other voice amplifying devices about Jesus Christ and proclaiming that abortion is murder.

Francis Eatherington said she came out Saturday, wearing the traditional pink cat-eared knit cap sported at Women’s Marches, to express her frustration with the Trump administration. She said Trump treats women badly, having been married multiple times and had affairs.

“How can this immoral person be our president? It’s just unfathomable,” she said.

She also said Trump has stacked the federal courts and women are worried.

“We’re worried about our continued health care rights going down, especially reproductive rights that we won decades ago could be in jeopardy now. This is a big problem for women in this administration,” she said.

“I think women can save the world,” she said. “I’m so excited that maybe we’re moving toward a period where people will realize women are what we need. We don’t need the testosterone. We need people who can teach love and acceptance and compassion and kindness and fight too when they need to, and I think we’ve got some great women candidates up there.”

Page attended the first Women’s March in Washington, D.C. in 2017, and said she’s been to one every year since. She said she was amazed how friendly everyone was at the D.C. march.

“No one was even rude. There were police there, but they didn’t have to do anything, and they were friendly and none of them were called on to act.”

Jon Clement of Grants Pass attended the rally to express his pro-life viewpoint. He carried a sign with an image of a bloody fetus and said he was there to share the gospel of Jesus Christ.

“I’ve had some great conversations so far with folks around this sign, and I appreciate that they’re engaging me,” he said. “Some won’t, but that’s because abortion is murder. We know that. Everybody knows that, but people suppress that truth and they go ahead and have their baby murdered.”

Phil Schad of Roseburg attended the rally in support of women’s rights. He noted all the pro-life counter-protesters were men.

“We are the ones who get women pregnant,” he said. “We should work on ourselves.”

Marcia Hall formerly ran the women’s health department for the Roseburg Veterans Affairs Medical Center and said she advocates for all levels of women’s health care. She said she was disturbed by the gruesome signs but attempted to have a conversation with one of the counter-protesters about his sign.

“I tried having a discussion with him about how difficult it is for all women to make those choices, and that’s very disturbing for anyone to see, pro-choice or anti-abortion, but he quickly devolved into telling me I was going to hell,” she said.

Hall was there to share a different message. She wants everyone to vote, no matter what issue is most important to them.

“It’s the single most effective exercise of power that we have,” she said.

Ashley Hicks speaking out: Right or not?